The first foundations for Singapore Changi Airport were laid 40 years ago in 1979.

To mark this milestone, it has released a set of fascinating images to show significant moments in the airport’s development, since day one.

Passengers today always love travelling through Changi – and no wonder. It has a stunning array of features. Fliers can relax in the world’s first butterfly garden at an airport, take a dip in Terminal 1’s rooftop pool and admire the 40-metre high Rain Vortex, the world’s tallest indoor waterfall at the new Jewel development.

Changi was recently voted the World’s Best Airport for the seventh consecutive year at the Skytrax Awards and has won the accolade a total of 10 times.

The first foundations for Singapore Changi Airport were laid in 1979. The first terminal to be constructed was Terminal 1 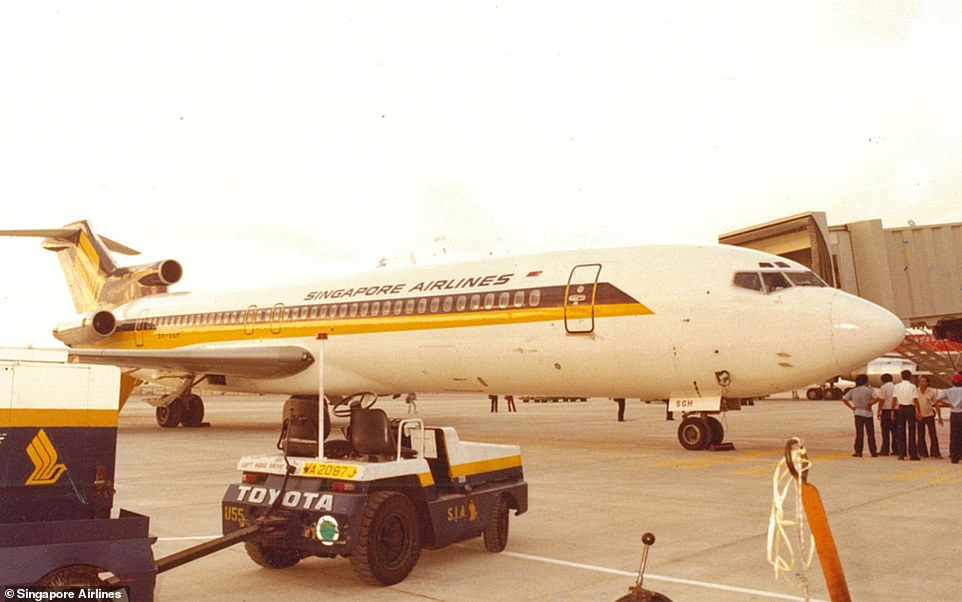 In 1981, two years after the first foundations were laid, Changi Airport was officially opened and saw the arrival of its very first commercial flight, Singapore Airlines’ flight SQ101 from Kuala Lumpur (pictured) 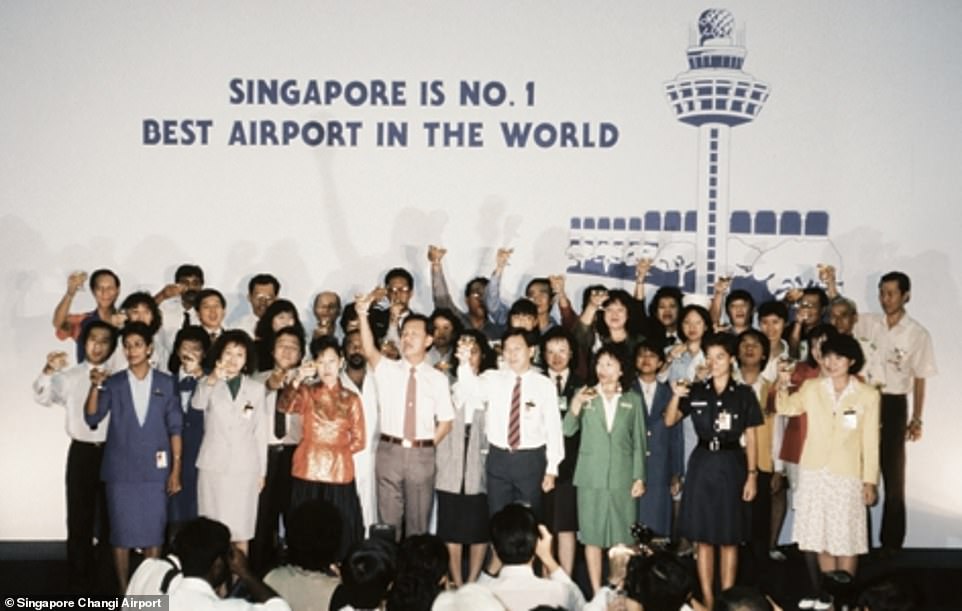 Business Traveller UK awarded Changi Airport the ‘Best Airport in the World’ award in 1988 – the first of many awards Changi would receive. In 2019, Changi picked up its seventh consecutive World’s Best Airport award at the Skytrax Awards

After nearly five years of construction, Terminal 2 opened at Changi Airport in 1990, connecting Singapore to 52 countries 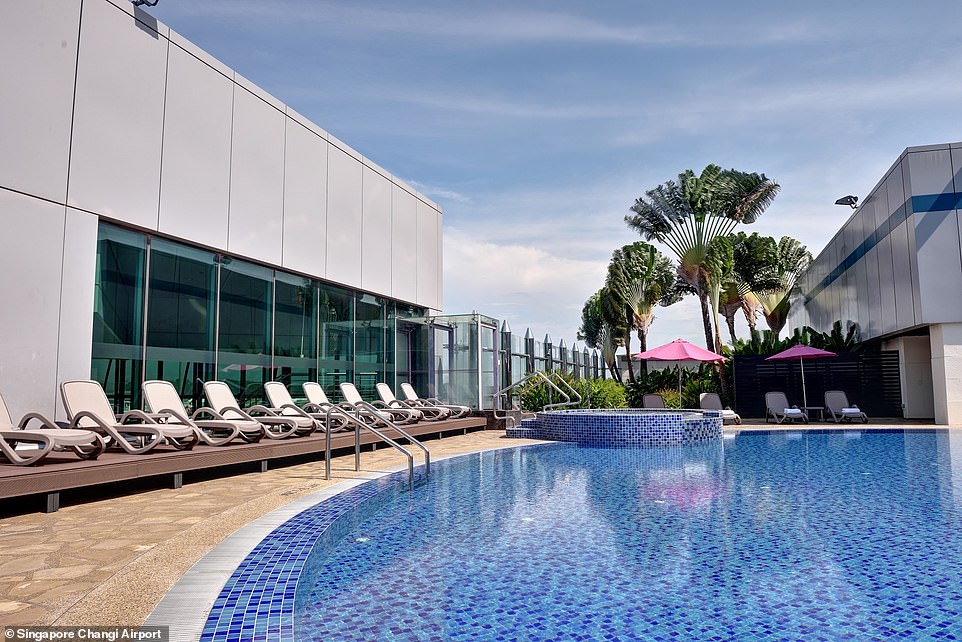 In 1995, the airport opened an amazing swimming pool on the rooftop of Terminal 1. The pool is still used by passengers today and is part of the Aerotel Airport Transit Hotel in Changi 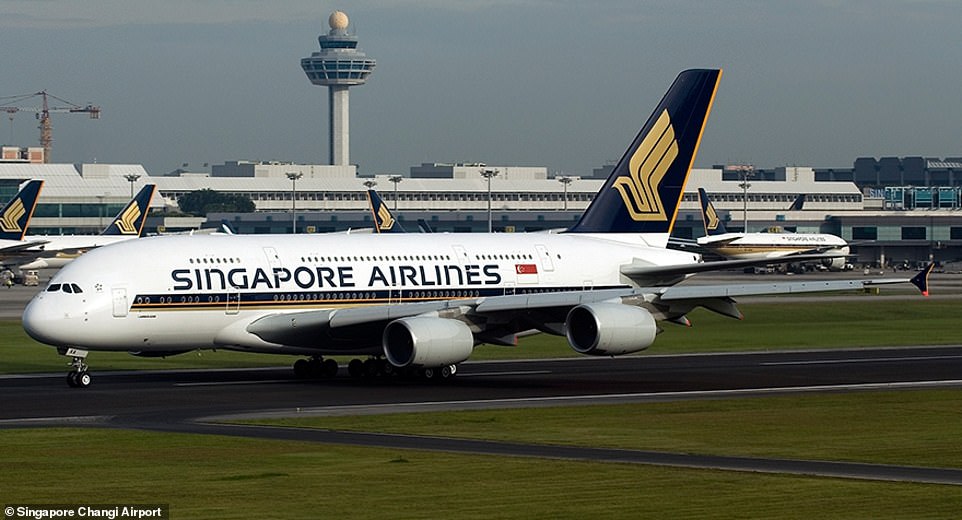 In 2007, Changi Airport made aviation history when the world’s very first Airbus A380 commercial flight (pictured), operated by Singapore Airlines, departed from Singapore to Sydney. The flight lasted seven hours and there were 455 passengers and 30 crew on board. Passengers bought seats for the flight in a charity online auction, with some paying up to $100,380 (£80,000) 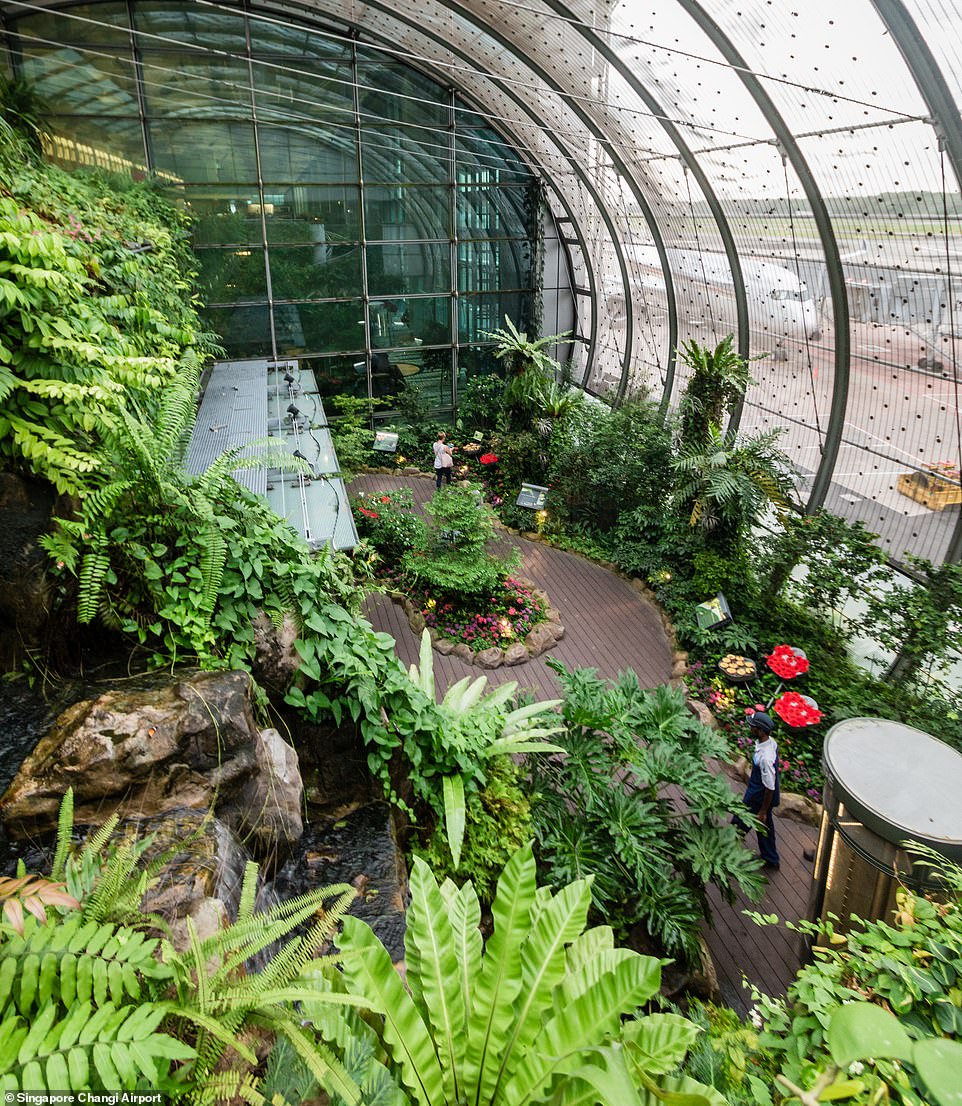 In 2008, the world’s first butterfly garden in an airport opened at Changi. It is located in Terminal 3 at the west end of the airport. The garden has a six-metre (19ft) grotto waterfall and is home to over 1,000 tropical butterflies from as many as 40 species 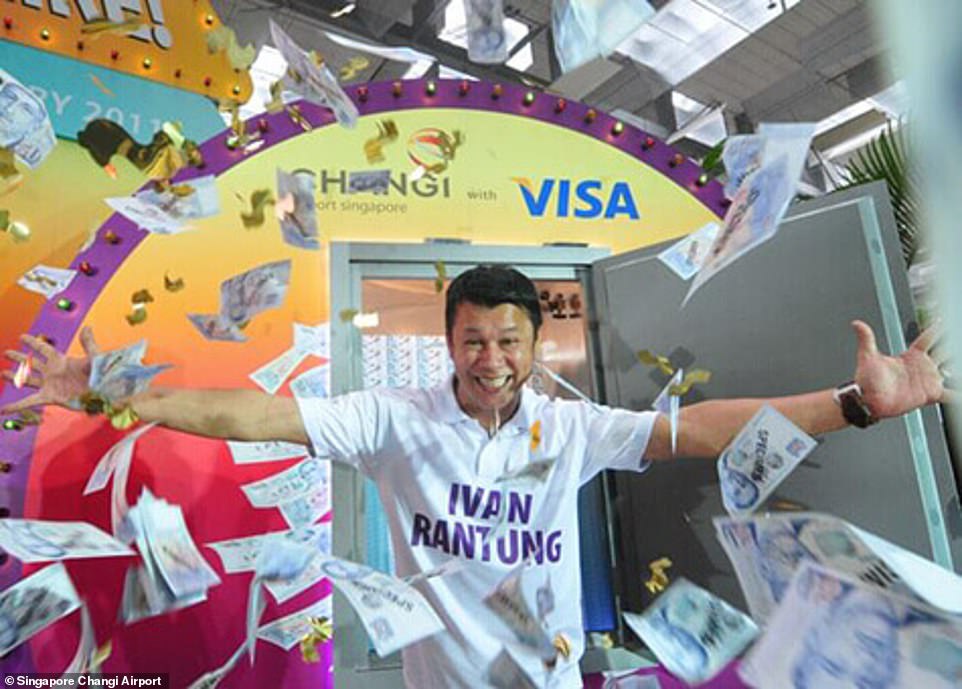 The ‘Be a Changi Millionaire’ promotion launched in 2010, which gives travellers who spend a minimum sum at Changi’s retail outlets a chance to to win S$1million (£587,000). Pictured is one of the winners, passenger Ivan Rantung. In the same year, The Slide@T3, the tallest slide in Singapore and the world’s tallest airport slide, opened. It stands at four-storeys high. In this year Changi Airport celebrated reaching 40 million passengers in a year for the first time 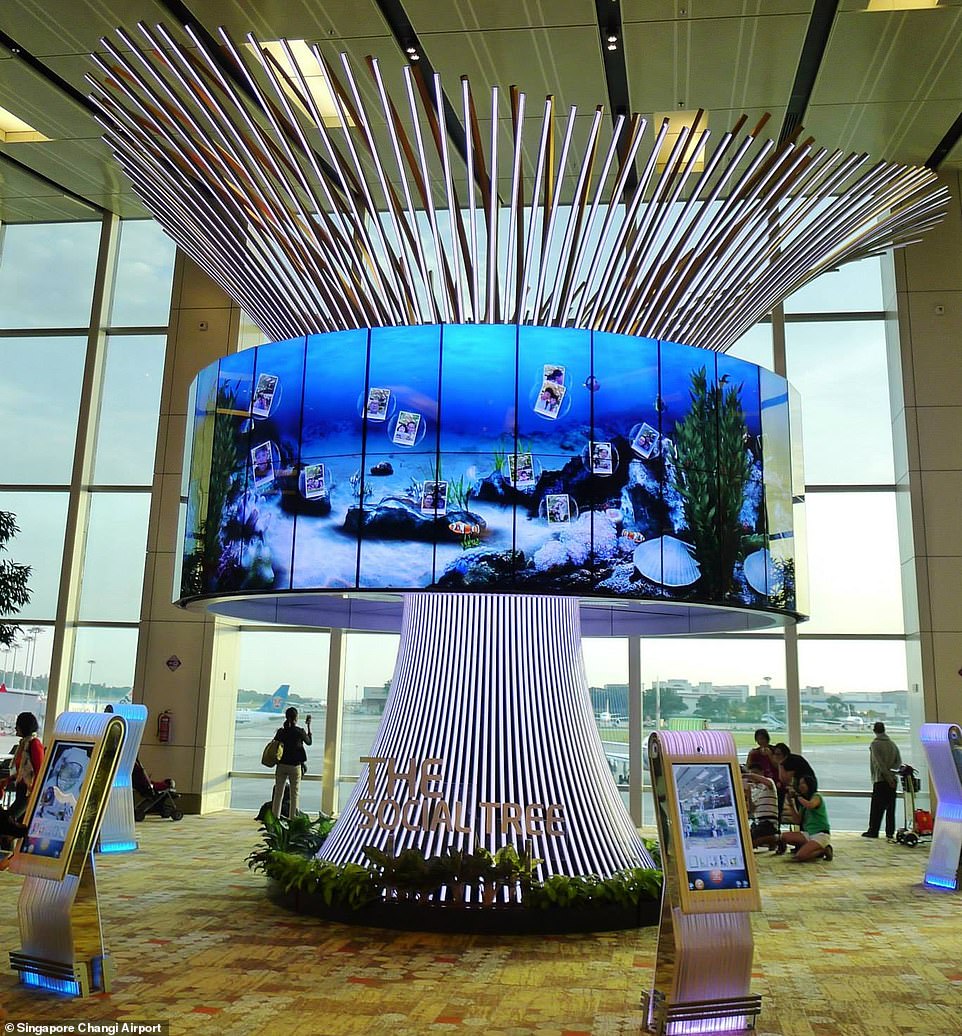 Changi unveiled its first interactive installation in 2013 – the near nine-metre-tall (29ft) ‘Social Tree’. The installation allows passengers to share photos and videos of the airport for its memory capsule. It is made up of 64 high-definition, 42-inch screens and the crown of the tree offers a 360-degree display of various animated backgrounds, including a mystical forest and the Singapore skyline 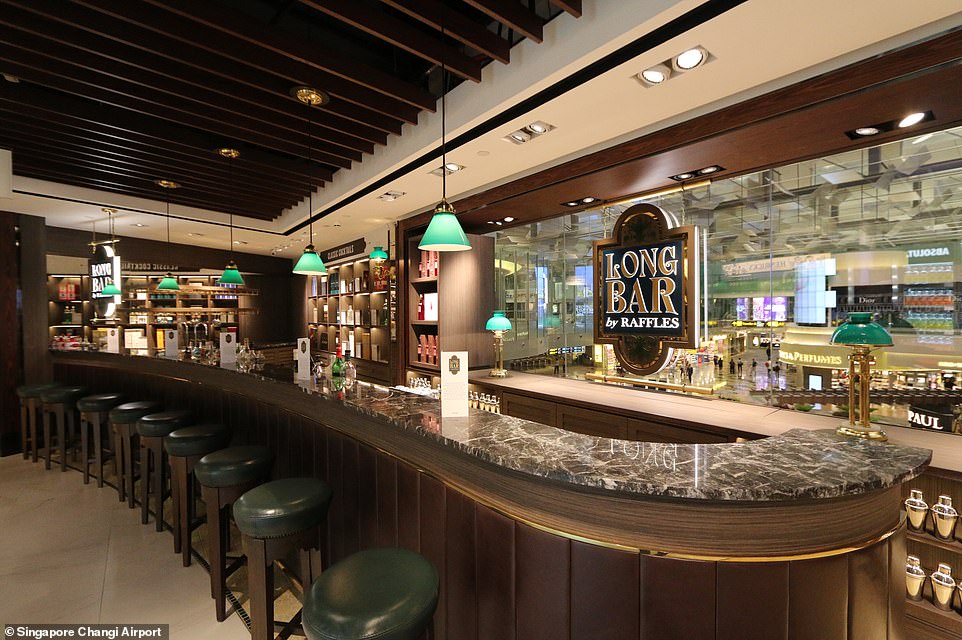 A version of the famous Long Bar in Raffles Hotel came to Changi Airport in 2015, serving free cocktails, including Singapore Slings, to passengers. The bar is situated in Terminal 3 within the world’s first DFS Duplex Store in an airport, designed by award-winning interior designer Masamichi Katayama 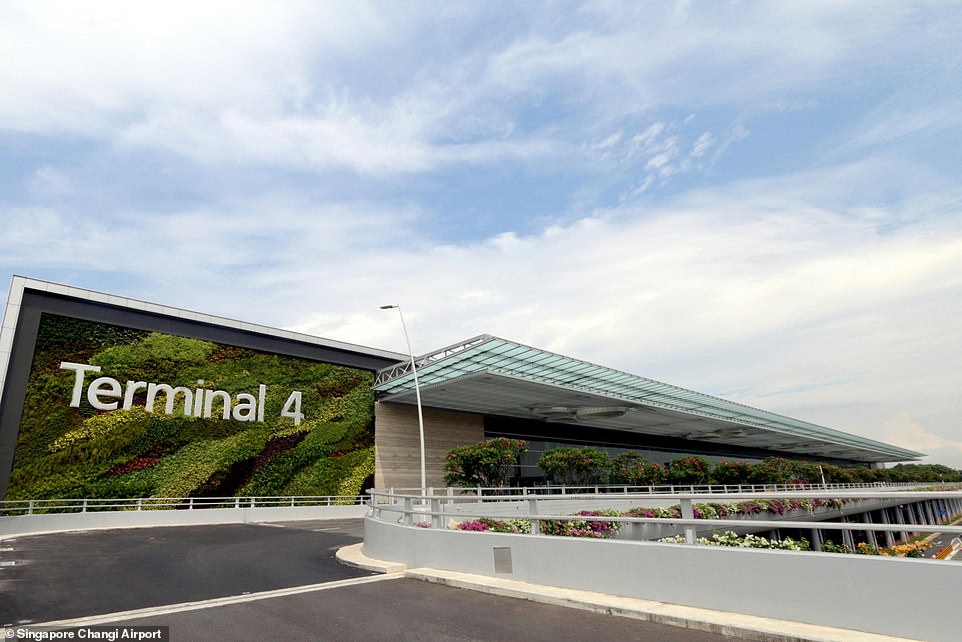 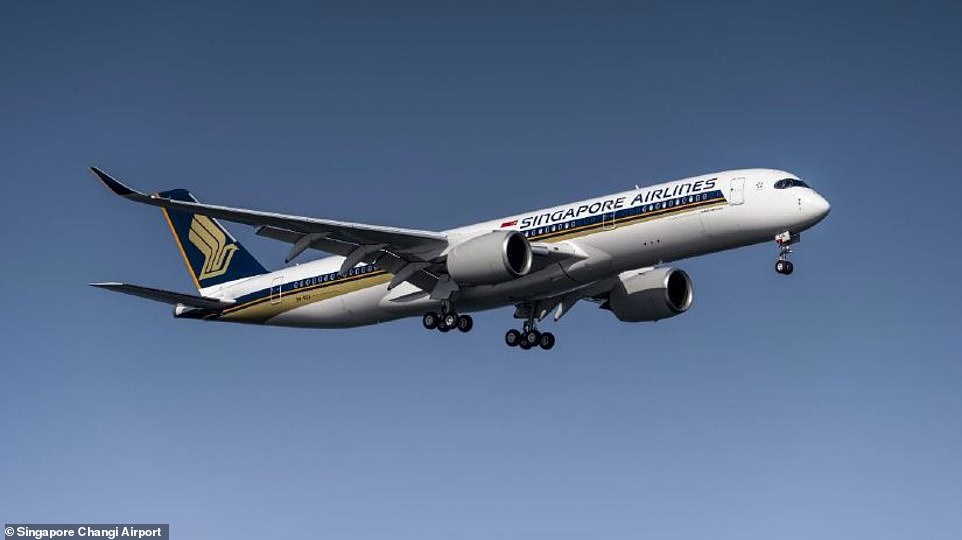 Changi made more aviation history in 2018 when the world’s longest non-stop flight, operated by Singapore Airlines, took off from Singapore headed for New York. The flight (pictured) used the long-range Airbus A350-900ULR, which was configured to carry 161 passengers – 67 in business class and 94 in premium economy with extra legroom. The flight lasted almost 19 hours and covered 10,400 miles 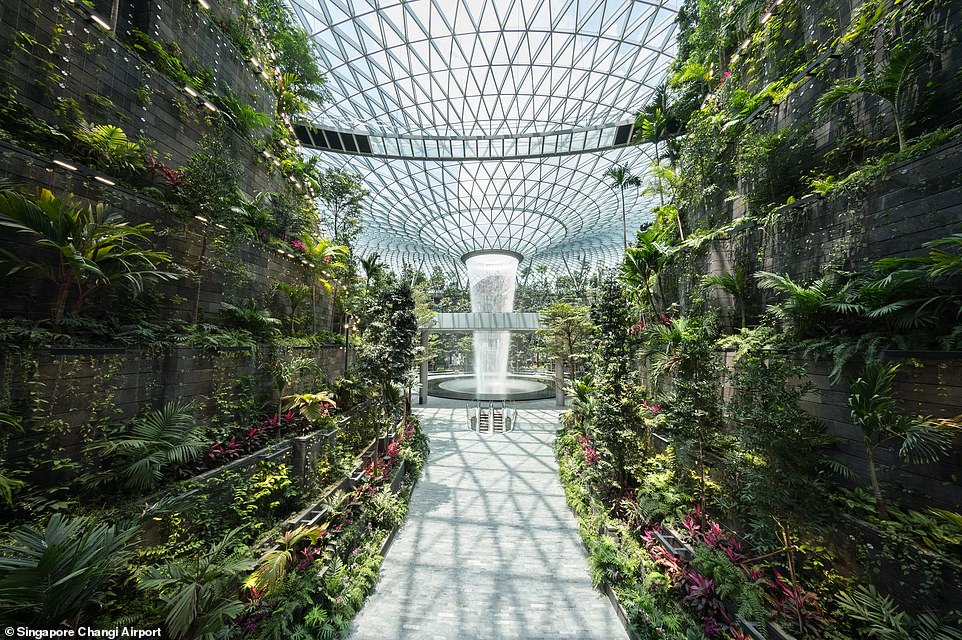 This year, the Jewel Changi Airport complex opened, which is described as a ‘multi-dimensional lifestyle destination with airport facilities’. It was designed by lead architect Moshe Safdie and cost £950million to build. It features the world’s tallest indoor waterfall, the Rain Vortex, which stands at 44 metres (144ft) 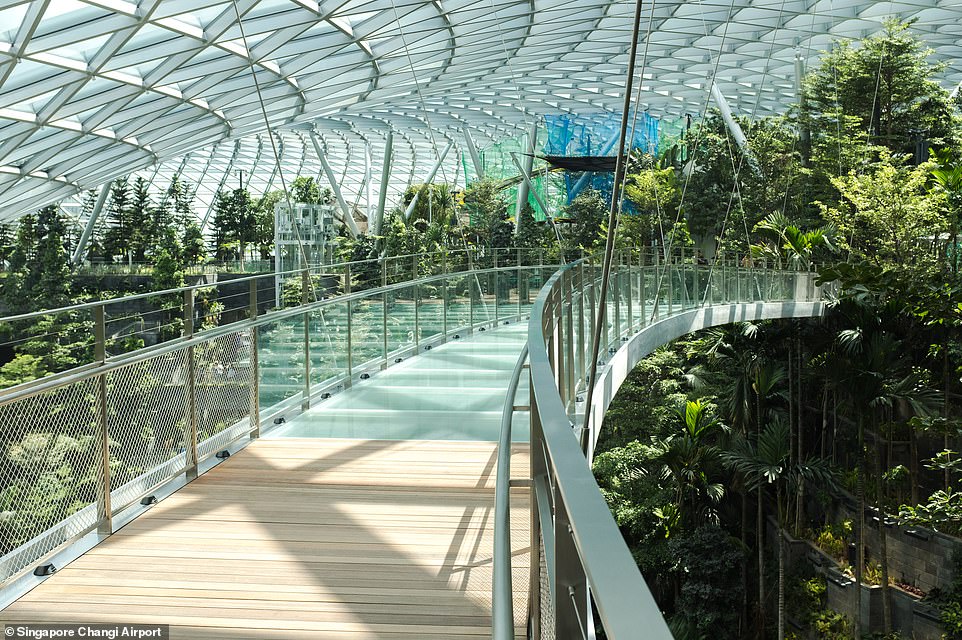 The development of Jewel enabled capacity at Terminal 1 to increase by three million passengers per annum to 85million. Jewel features an indoor forest (pictured) and a wide range of family-friendly attractions at the Canopy Park