Ever fancied quitting everything, buying a van and hitting the road?

Well a new tome, titled The Culture of Vanlife, might just convince you to make that decision.

The book, curated by ‘vanlife pros’ Lauren Smith and Calum Creasey from Cornwall (their road trip spanned 120,000km/74,500 miles), features a selection of stunning images and some fascinating insights into what life on the road is like from those who have given it a serious whirl. Scroll down to wheel through a handful of the highlights…

Driving to the end of the world

A Xenia and Micha Kegel shipped a Volkswagen LT 28 from Germany to Cartagena in Colombia to embark on a journey of a lifetime. They drove the length of South America from north to south. Above, a photo from their epic trip 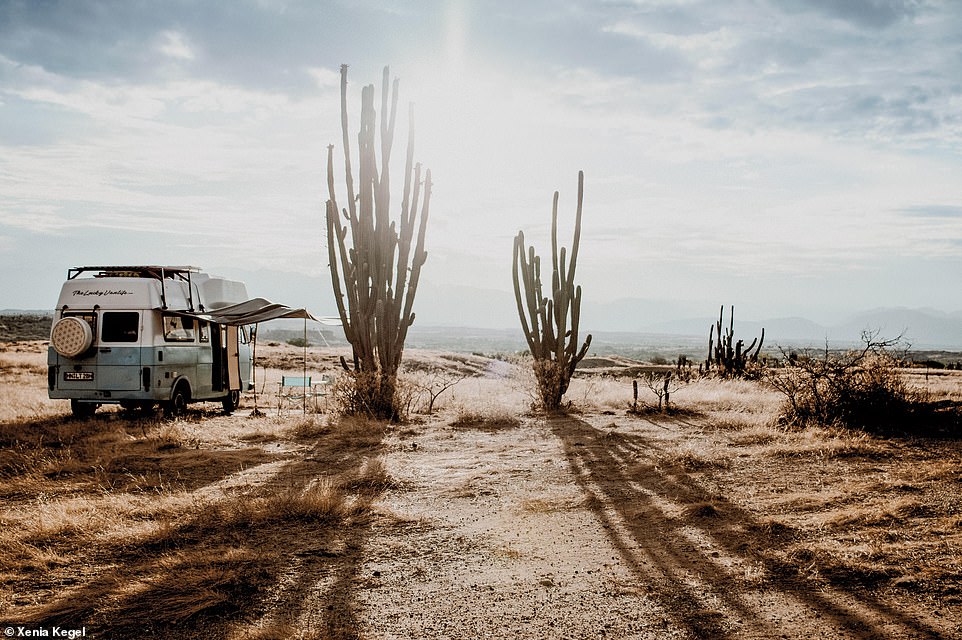 Xenia and Micha Kegel said the roads in South America got worse the further north they went. Above, an image from their long drive 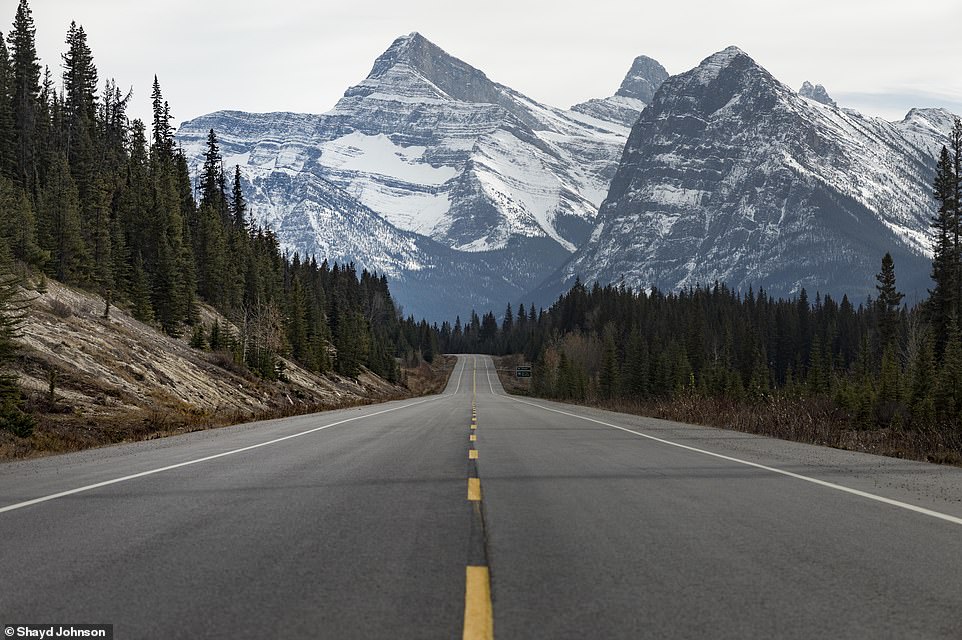 A new tome, titled The Culture of Vanlife, features a selection of stunning images and some fascinating insights into what life on the road is like. Above, a shot by British Columbia-based photographer Shayd Johnson, who has spent years documenting the vanlife community

Xenia and Micha Kegel shipped a Volkswagen LT 28 from Germany to Cartagena in Colombia to embark on a journey of a lifetime.

They drove the length of South America from north to south. While they didn’t run into any danger, they said the roads were ‘another story’.

Xenia explained: ‘The further north you are in South America and the smaller the towns get, the worse the streets are.

‘It can either be a fun experience or else you can be exhausted from the first minute of driving. We got the van stuck so many times – we got pulled out by horses and tractors or else just had to use our hands.

‘The first time, we really panicked – but the deeper you sink, the more relaxed you become. The last times, we just cooked coffee and enjoyed the moment until someone came along to help. There was always someone.’

After multiple breakdowns, the couple eventually made it to the southernmost point on Earth that you can access by car.

Xenia mused: ‘Here we felt like the last people living on the planet. It was autumn in Tierra del Fuego and one of the best places we’ve ever been to.’

On the road with two children 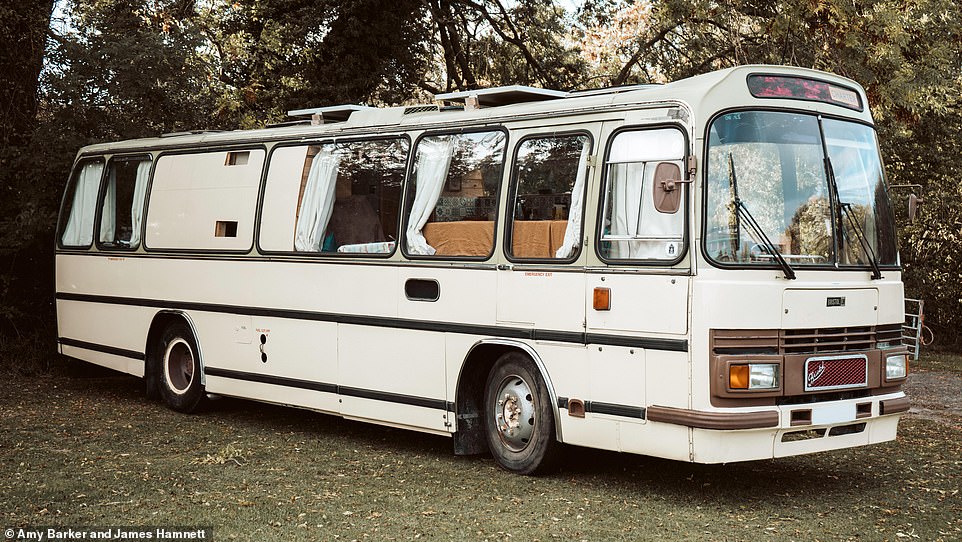 Amy Barker and James Hamnett from the UK both experienced outdoor living as children. After their daughter Holly suffered from illness, the couple decided to return to their childhood roots and convert an old school bus into a home on wheels. The bus is pictured above

Amy Barker and James Hamnett from the UK both experienced outdoor living – camping and caravanning – as children.

After their daughter Holly was diagnosed with bilateral hip dysplasia, a congenital condition that causes the hips to dislocate and requires surgery, the couple decided to return to their childhood roots and convert an old school bus into a home on wheels.

It’s not an easy road but it’s wonderful all the same. Watching the children blossom without “hard” schedules in their life is also gorgeous to watch and I hope this continues to grow as they do

They said that the stress of their daughter’s illness made them want to find a way of living on their ‘own terms, more frugally, intentionally and with a bigger value on time’.

Amy explained: ‘We wanted to get back the time we’d lost. We wanted to rediscover the natural world with [our daughter] and to have some fun again as a family. James and I were both working stressful jobs at the time so were happy to take a break from them. We decided to just go for it and bought our bus, Monty.’

The couple, who also have a son called Forrest, say that moving into a bus was the best thing they ever did and everyone has adapted to living in a small space. Their children – Holly is now aged ten and Forrest two – are home-schooled, with lessons in line with their own interests.

Amy concluded: ‘It’s not an easy road but it’s wonderful all the same. Watching the children blossom without “hard” schedules in their life is also gorgeous to watch and I hope this continues to grow as they do.’ 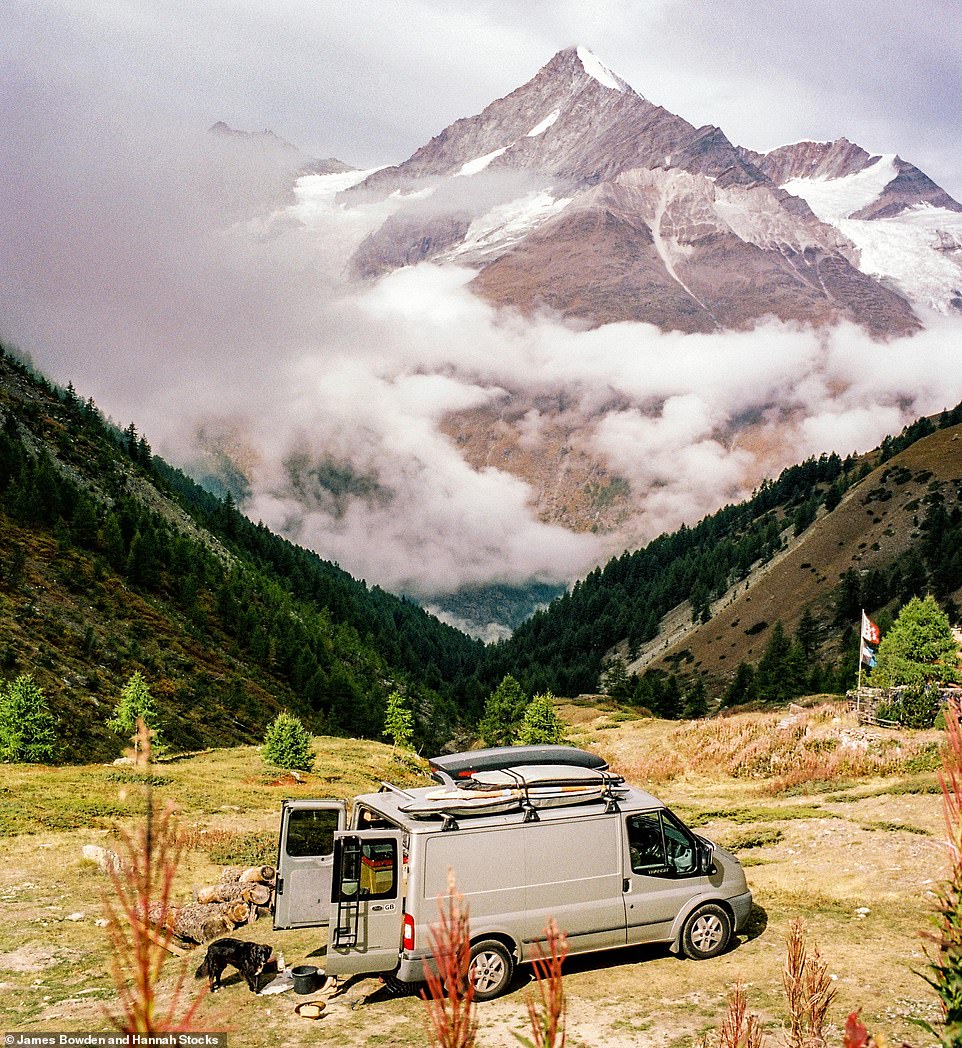 A van parked up amid the jaw-dropping Swiss Alps, with a dog in tow and a few surfboards secured to the roof 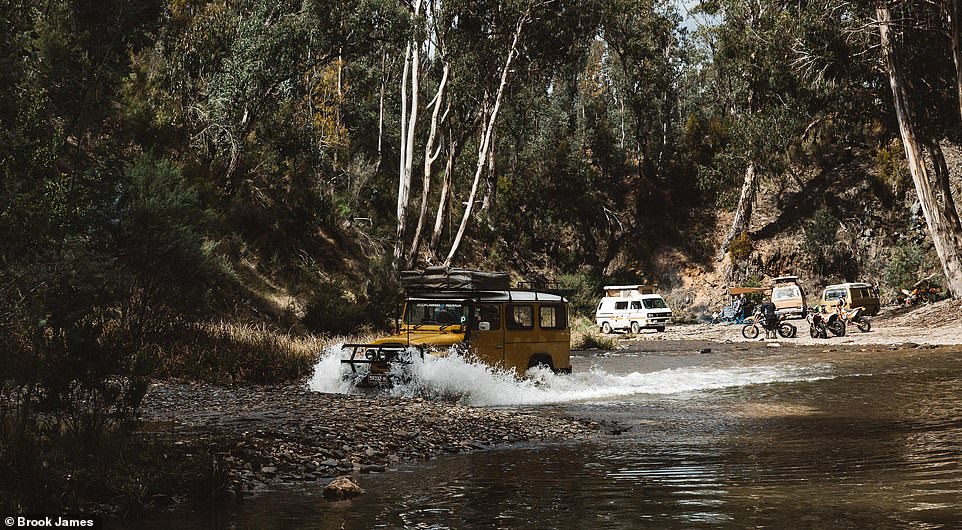 Sam Glazebrook from Cornwall wanted to feel more in touch with the outdoors and the beautiful scenery surrounding him.

He decided that living in a van would give him ‘access’ to this, and he purchased a four-speed 1990 petrol LT35 with an aluminium Luton box on the back, from eBay for £1,000. Sam kitted the vehicle out with a small kitchen, double bed, a small log burner and a sliding glass door for less than £800.

He admits that living in a van for three years ‘wasn’t all cosy Instagram posts and perfect beachside locations’.

Offering an insight into some of the realities behind the filtered vanlife shots we’re all too used to seeing on social media, Sam said: ‘Try sub-zero temps, damp bed sheets, borrowed sleeping bags and extra blankets, small gas fires from my dodgy cooker, smoke leaking through my unsealed flue… I could go on.’

After moving out of his van, Sam built a small cabin on a plot of land with the help of family and friends. He now lives there full-time.

Men with machetes in Mexico 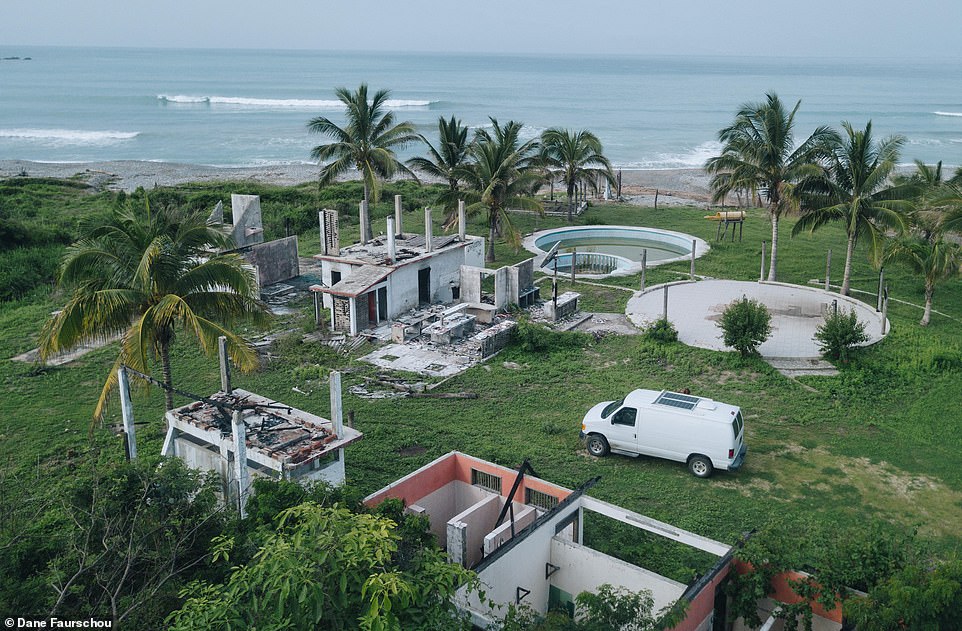 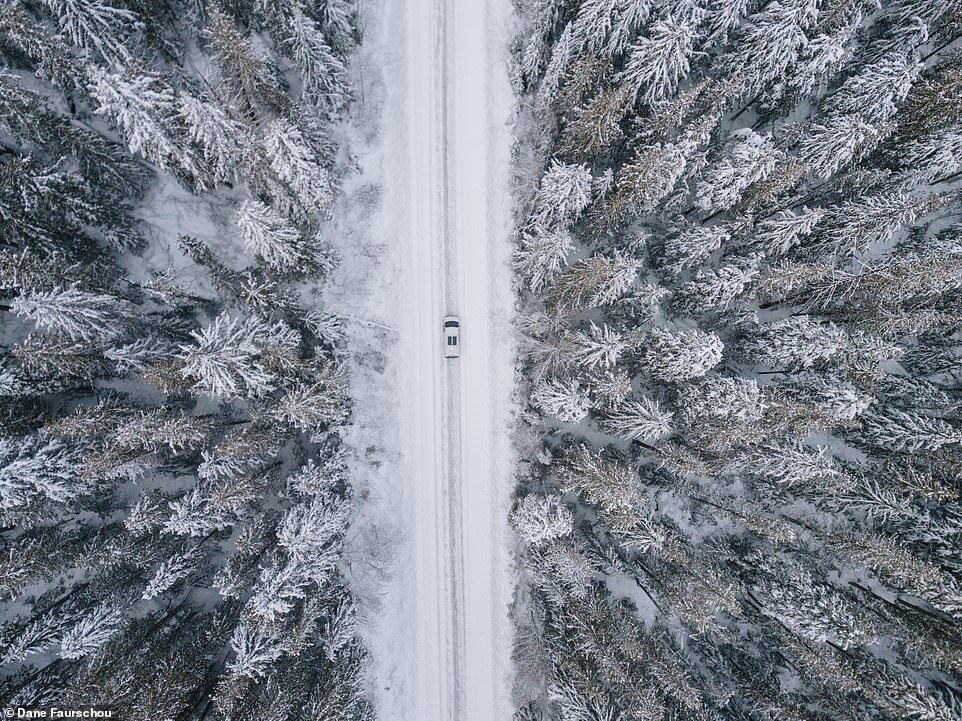 Dane Faurschou from Australia met his girlfriend Sara while he was living in Copenhagen. They left the Danish capital in February 2017 and they have been living on the road ever since. Above, an aerial shot of their van on a snowy track 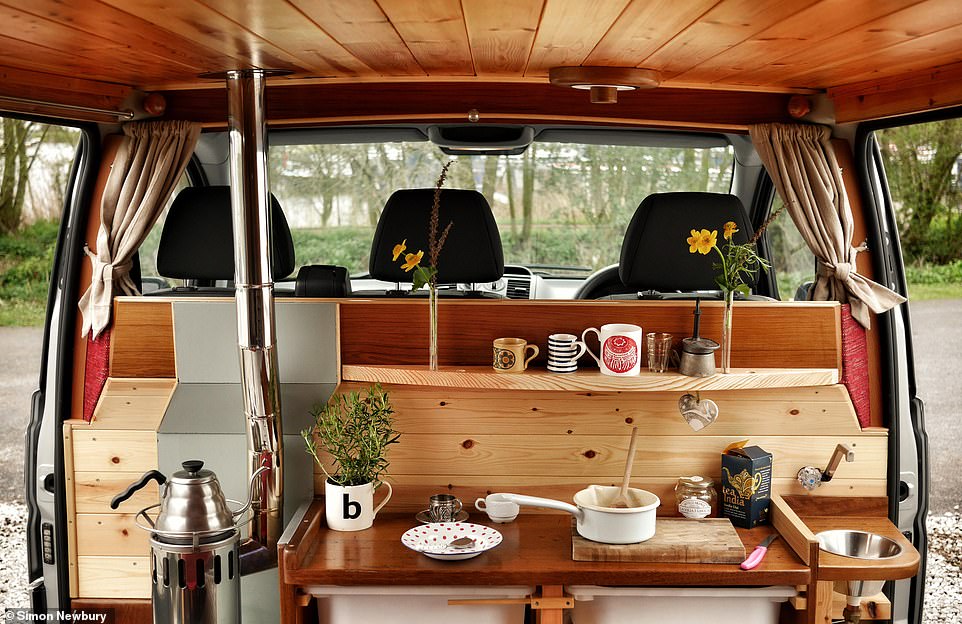 A peek inside a converted van, with a small kitchen area complete with a washbasin and water boiler

Dane Faurschou from Byron Bay, Australia, met his girlfriend Sara while he was living in Copenhagen. They left the Danish capital in February 2017 and they have been living on the road ever since. Dane, who freelances as a photographer, says that he and Sara love life in their van.

However, he admits that it hasn’t all been plain sailing and there have been some scary moments along the way.

While driving around a remote spot in Mexico, Dane said that around 10 to 15 men with machetes blocked them from crossing a road. Unsure how to handle the situation, Dane said he ‘planted my foot and ploughed straight through them’.

Another low was when they were travelling through Canada and their van got bogged down five or six times and got trapped in roads by small avalanches and trees.

Dane mused: ‘Canada just taught us a little more patience and perseverance and every single problem was worth it in the end.’ 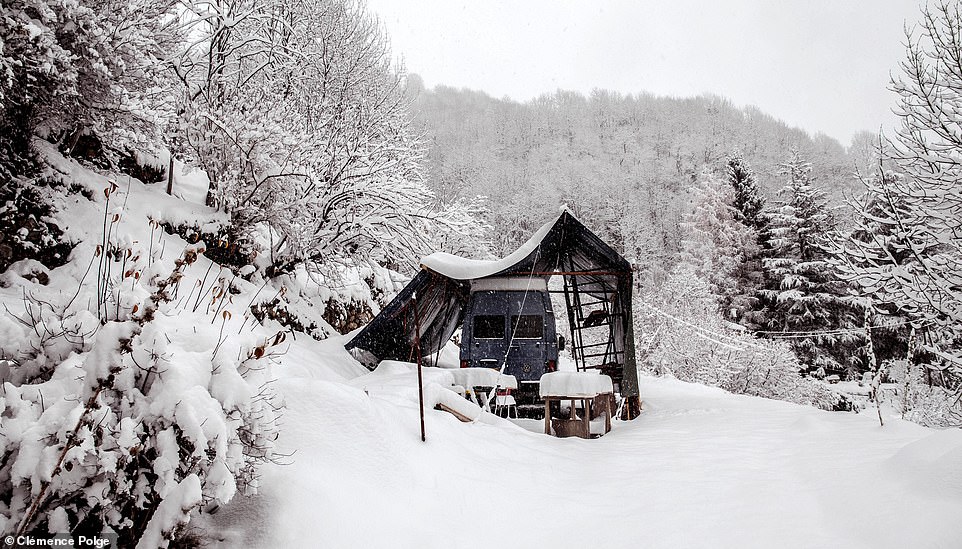 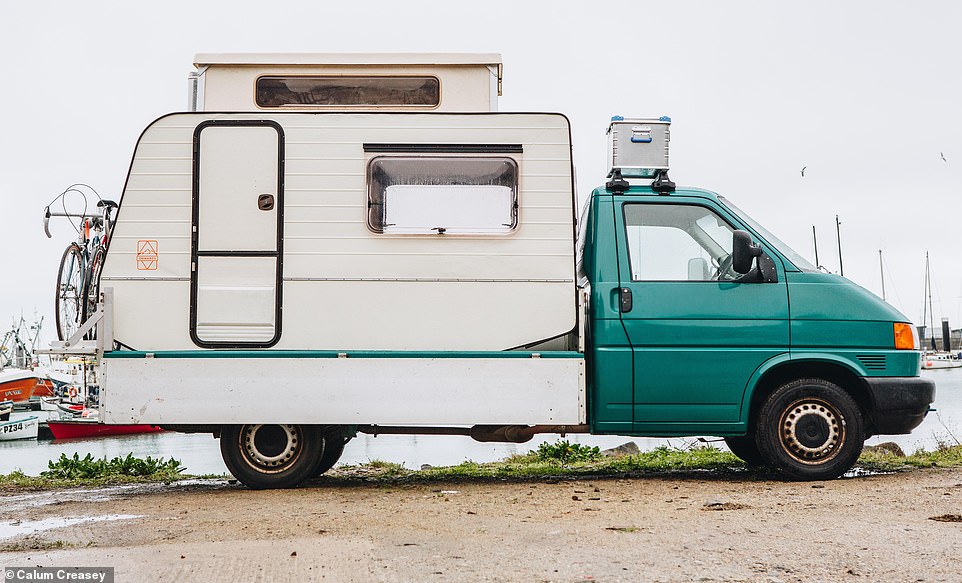 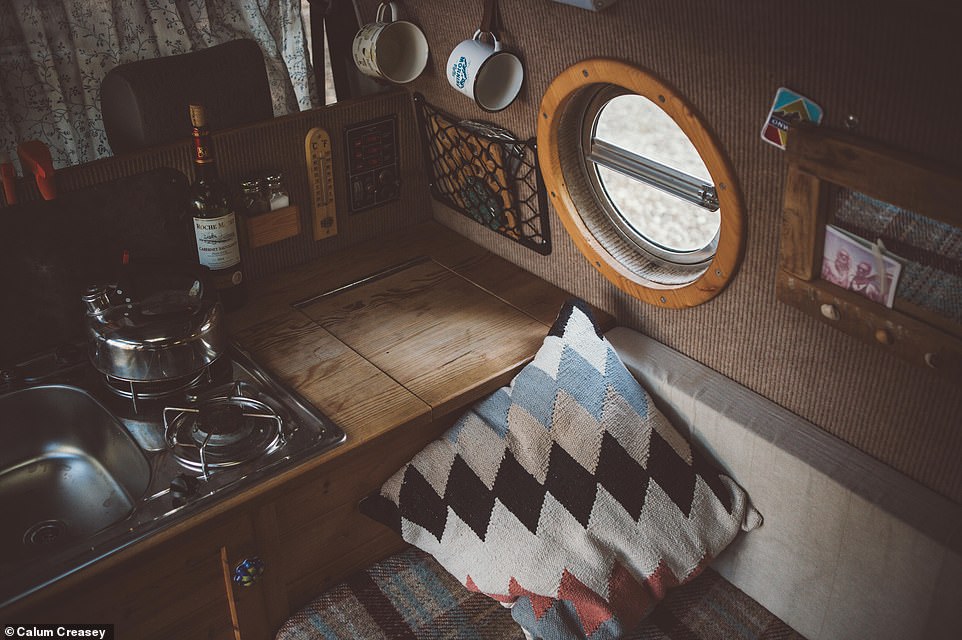 The new book shows how vans come in all shapes and sizes, with owners adding personal touches and tastes to each vehicle

Clémence Polge from France decided to venture into the realm of vanlife after going on a road trip with her boyfriend, Thomas. That initial trip saw the duo drive from Vancouver to Calgary.

The couple purchased a Volkswagen LT40, which had previously been used by the Luxembourg police force. Clémence said this was the perfect vehicle, as the high ceilings could accommodate Thomas’ 6ft 8in frame.

And the duo had to consider their cat, Nel. Clémence said that they ‘set up a nice sleeping spot’ for the feline in the form of a hammock.

The couple say that ’embracing the nomadic life was the right decision’.

They say that Nel the cat has also ‘adapted very well’ to the van way of life and she uses the vehicle as a ‘basecamp’ to go out exploring new areas.

Clémence concluded: ‘She always knows where to run back to when there is danger!’

How life on the road changes you 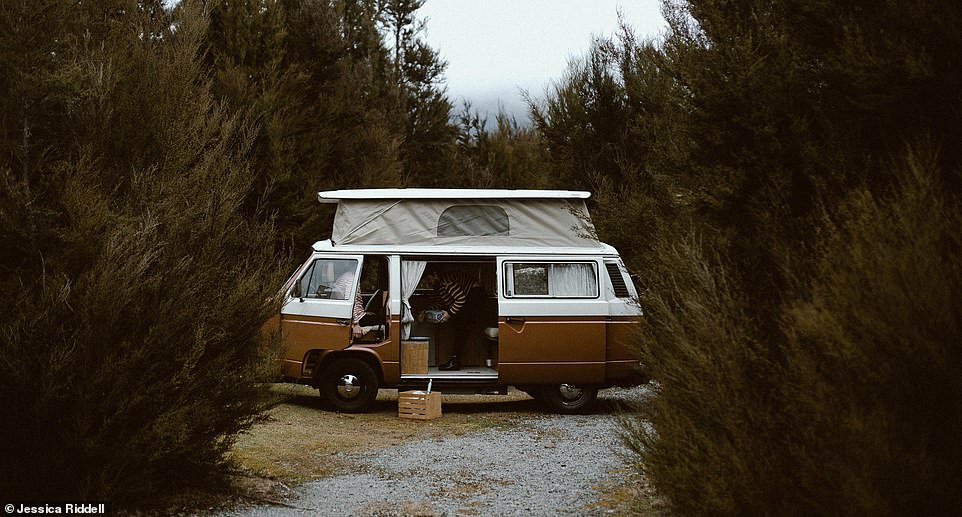 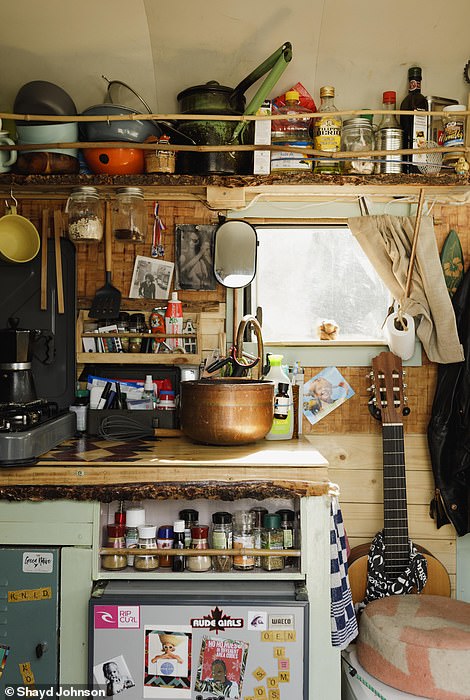 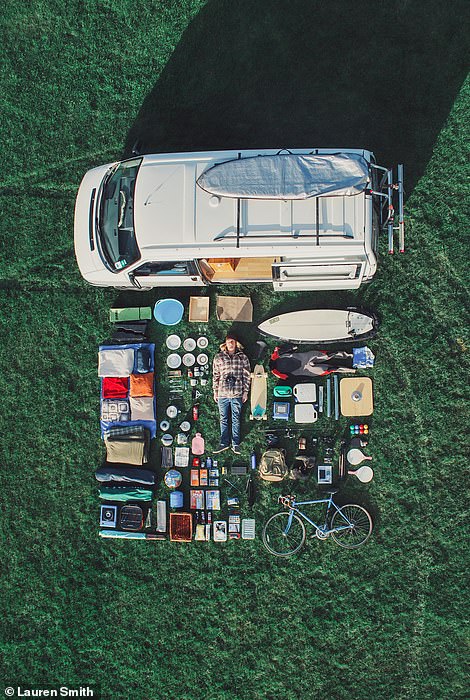 On the left is a photo by Shayd Johnson revealing a van with a well-stocked kitchen area. Right, an aerial shot by Lauren Smith showing all of the possessions inside her van 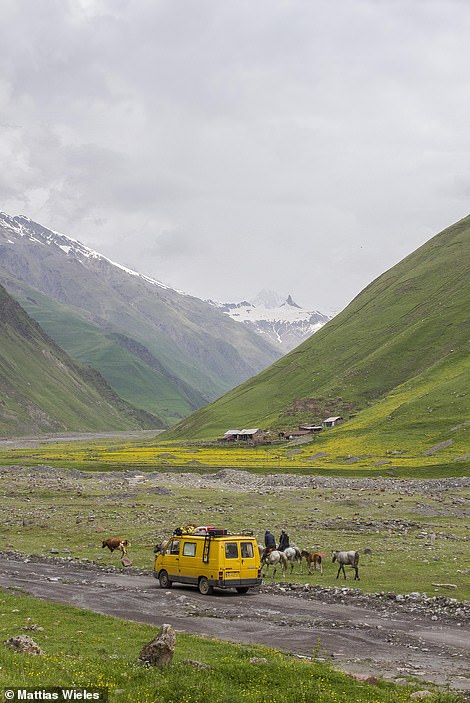 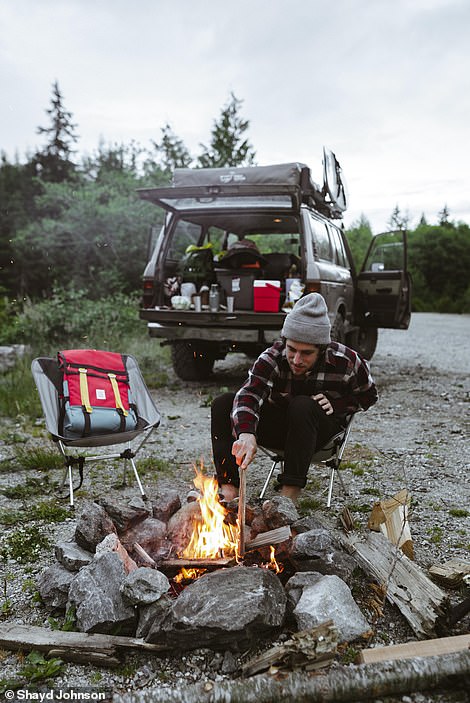 Left, a shot of Mattias Wieles’ van during his trip through Albania and Georgia. Mattias, who is from the Netherlands, drove around with his girlfriend. On the right is a picture by Shayd Johnson, taken in his native British Columbia. He said vanlife is a necessity for many people because property is too expensive

Mattias Wieles from the Netherlands decided to road trip with his girlfriend Anniek Reehoorn shortly after they had both finished their studies. They sold all their belongings, quit their jobs and purchased an old Renault Trafic, four-wheel drive van.

Over the course of almost a year, the couple ticked off dozens of places on the map, including Portugal, Spain, Morocco, Albania, Turkey and Georgia. After they returned home, Mattias said that they were different people because the ‘road changes you’.

He explains: ‘We deleted all the fuzz, we skipped all the noise for a year, and chose for radical calibration.’

In a bid to maintain a simple way of life, the couple went about building a ‘tiny house’ as their permanent home.

Mattias says that living in a van taught them the beauty of ‘a simple life, where you can’t hide from yourself, the actual world around you, or your loved ones’.

The Culture of Vanlife from The Rolling Home is available to purchase, priced at £25. 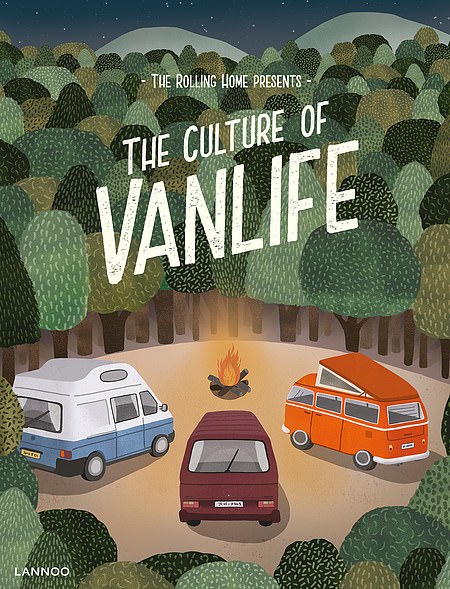 Your vehicle of choice is ready but where to start your adventure? Here, Lauren Smith and Calum Creasey, co-curators of The Culture of Vanlife book, share some of their favourite places and recommendations from fellow vanlifers…

Cornwall, United Kingdom: Lauren and Calum say that spring or autumn is the best time to visit.

Outer Hebrides, Scotland: Take the ferry from the mainland and island-hop your way to the northern tip of Harris.

West Coast, Ireland: Find a friendly pub complete with a fire, so you can thaw out after exploring the rugged coastline.

The Lofoten Islands, Norway: A must-see spot with ‘towering granite peaks’, with the possibility of seeing the Northern Lights or a winter sun that doesn’t set.

Argentina, Chile and Bolivia: The driving duo muse that ‘if magic still exists on this planet, you can find it here’.

Baja California, Mexico: It’s possible to be cut off for ‘days or weeks at a time’ on this remote peninsula, so Lauren and Calum suggest stocking up on supplies. 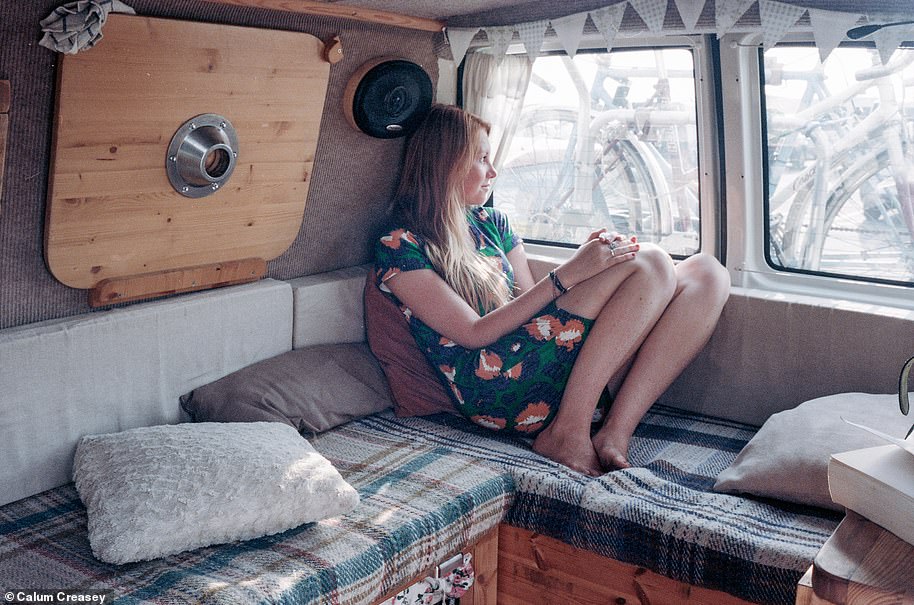 A shot of Lauren Smith, who co-curated The Culture of Vanlife. Her van is a 1996 Volkswagen Transporter

Morocco: A ‘hot, colourful and beautifully vibrant’ country with waves and free camp spots on the coast.

Meru National Park, Kenya: A place where you can see the ‘most majestic of the Earth’s creatures in their natural habitat’.

South-western Australia: Simply described as a ‘paradise for camper-van travel’ with endless roads, beaches and camp grounds to discover.

Coles Bay, Tasmania: Leave your van at Freycinet National Park, which overlooks the Tasman Sea, and ‘do some serious hiking’. 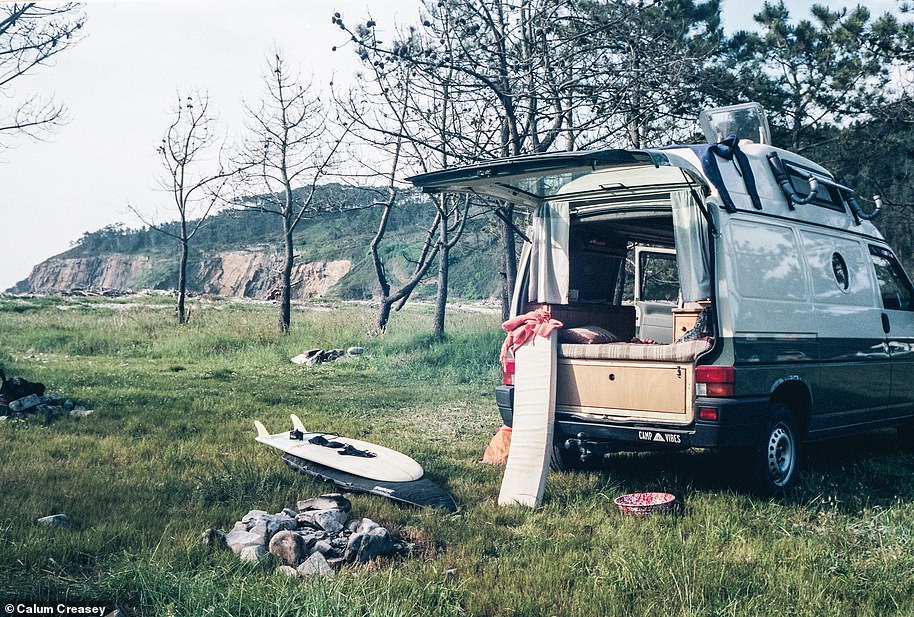 One couple said they were confronted by a group of men with machetes while driving through Mexico, highlighting the importance of exercising caution when in remote areas. Above, a photo by Cornwall-based Calum Creasey

Hampi, India: A voyage of discovery along ‘dusty, busy highways’, among ‘temples, boulders, colours and smells’.

Tofino, Vancouver Island: ‘Park alongside a saltwater inlet under the green forest canopy and set up camp.’