HONOLULU (AP) – Fast-flowing lava rivers oozed across more land toward the ocean on Hawaii’s Big island over the weekend, prompting officials to knock on doors and urge remaining residents in the Leilani Estates and Lanipuna Gardens evacuation zones to flee immediately.

At least one resident was trapped by lava from the Kilauea volcano before being rescued by authorities.

A section of a highway through the affected areas was closed after a lava flow came within about 100 yards (90 meters) of the roadway, according to the Hawaiian Volcano Observatory.

In this Saturday, May 26, 2018, image released by the U.S. Geological Survey HVO shows an aerial view of fissure 22 looking toward the south, as Kilauea Volcano continues its eruption cycle near Pahoa on the island of Kilauea, Hawaii. Lava from the Kilauea volcano has reached a geothermal power plant on the Big Island, approaching wells that have been capped to protect against the release of toxic gas should they mix with lava. (U.S. Geological Survey via AP)

Vigorous fountaining of lava at one fissure blew strands of volcanic glass known as Pele’s hair into the air. The glass was named for the Hawaiian goddess of fire.

Explosions at the summit of Kilauea volcano also sent small bursts of volcanic ash as high as 15,000 feet (4,570 meters).

Wind carried volcanic gases, pollution and ash particles to other parts of the island. On Tuesday, authorities advised residents to minimize exposure to these elements to avoid irritation to skin, eyes and respiratory systems.

A new fissure opened, bringing the total number spouting lava to 24 since the volcano began erupting on May 3, according to Hawaii County Civil Defense.

Lava had also covered two wells at a geothermal plant as of Sunday. County officials said the plugged wells were stable and being monitored, and there was no release of dangerous gases such as hydrogen sulfide – a colorless, flammable gas that can be emitted by volcanoes or when organic matter and waste break down.

Ormat Technologies, a Nevada company that owns the geothermal plant, said Monday it could not currently assess the extent of damage to the wells. The plant, Puna Geothermal Venture, produces roughly one-quarter of the Big Island’s daily energy supply.

Lava and volcanic ash spewing from Kilauea have torn apart parts of the sparsely populated southeastern side if the Big Island. The eruption that began May 3 had displaced thousands of residents, burned down 37 houses and forced businesses to close.

Two earthquakes on Monday and Tuesday — 4.4 and 4.5-magnitude, respectively — shook the Big Island, though neither was strong enough to generate tsunamis, according to the Pacific Tsunami Warning Center.

After weeks of scientific updates on the volcano, the U.S. Geological Survey took a lighter tone in responding to a question posed on Twitter regarding whether or not it would be safe to roast marshmallows over volcanic vents.

“We’re going to have to say no, that’s not safe,” the USGS tweeted in reply, saying if the vent was emitting volcanic gases, such as sulfur dioxide or hydrogen sulfide, the roasted marshmallows “would taste bad.” The gases generally emit the smell of rotten eggs.

Hawaii’s Volcanoes National Park has remained closed for 19 days. The park has no water due to damaged utility lines, said Jessica Ferracane, a spokeswoman for the National Park Service. 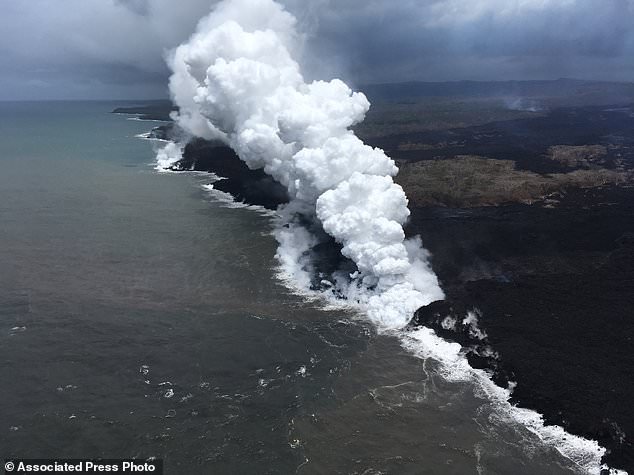 In this Saturday, May 26, 2018 image from video released by the U.S. Geological Survey, lava sends up clouds of steam and toxic gases as it enters the Pacific Ocean as Kilauea Volcano continues its eruption cycle near Pahoa on the island of Kilauea, Hawaii. Lava from the Kilauea volcano has reached a geothermal power plant on the Big Island, approaching wells that have been capped to protect against the release of toxic gas should they mix with lava. (U.S. Geological Survey via AP)