Another memorial to Captain Cook is under threat after an inner-city Melbourne council voted to consult the local Aboriginal community about its fate.

The monument to Cook stands in Edinburgh Gardens at North Fitzroy and was defaced on June 15 with a cross painted over the explorer’s plaque and ‘Shame’ written below.

‘Remove this’ and ‘Destroy white supremacy’ were painted at the base,  while the slogans ‘F*** Cook!’, ‘Stolen land’ and ‘Burn the boats’ were written behind the plinth.

Yarra Council considered the memorial’s future on Tuesday night after Councillor Stephen Jolly put the matter up for debate.

The council motion came amid calls to remove statues of anyone perceived to be linked to white colonisation in the wake of the Black Lives Matter movement.

This monument to Captain Cook in Edinburgh Gardens in Melbourne’s inner-city North Fitzroy was defaced with a cross painted over the explorer’s plaque and ‘Shame’ written below. 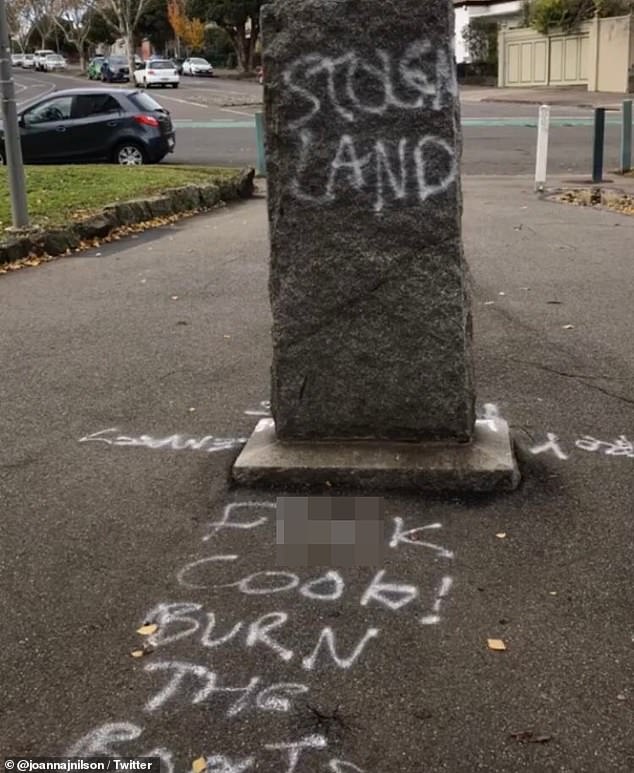 ‘Remove this’ and ‘Destroy white supremacy’ were painted below the monument and ‘F*** Cook!’, ‘Stolen land’ and ‘Burn the boats’ was written behind the plinth

Captain James Cook claimed the east coast of Australia for Great Britain in 1770 in a feat of exploration which was followed by the arrival of the First Fleet in 1788.

‘We’ve got a lot of feedback from all over Australia,’ he said.

‘One view is to leave it where it is. Another is saying take it down straight away.

‘And then there’s a third option of keeping it where it is but changing the plaque to give a bit of background and history.’

Yarra Council did not decide what would happen to the monument but declared its support for the Black Lives Matter movement in a motion passed unanimously and without debate.

‘They’re basically going to consult with the indigenous community because they’re the ones who are offended by it,’ Councillor Jolly said. ‘What we end up doing I don’t know.’

Councillor Jolly said another option would be to retain the Cook plaque and erect an indigenous monument nearby. 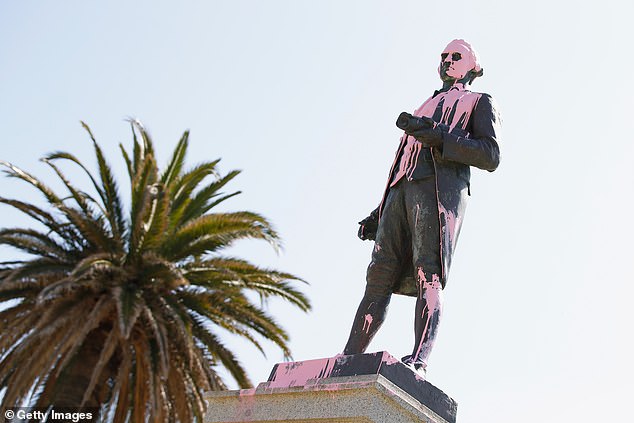 Statues of Captain Cook have been vandalised in Australia in recent years. This monument to the explorer in Catani Gardens at St Kilda, Melbourne, was defaced on January 25, 2018

‘If it was up to me – which it’s not – I would move it because I think it’s offensive to the First Nations people,’ he said.

‘I just can’t see why we would want to p*** off the indigenous people by having it there.’

The Black Lives Matter motion passed by council was prepared in consultation with an advisory group made up of Aboriginal and Torres Strait Islander community members. 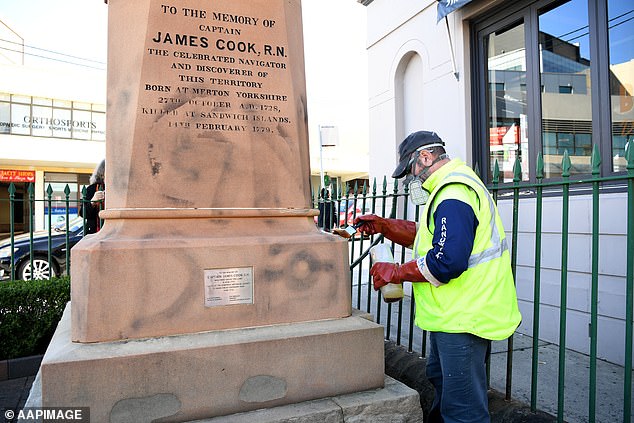 ‘We are committing to taking a look at all the historical people and events represented in statues, plaques, monuments and other signage, and examining anything that may be associated with oppression of Aboriginal and Torres Strait Islander people.

‘This does not necessarily mean we are committing to removing or replacing any historical markers.

‘The intention is to understand and ultimately share the full extent of our history here in Yarra, and tell a complete story.

‘This story cannot be complete without also including our Wurundjeri Woi Wurrung, Aboriginal and Torres Strait Islander community.’