Fate of shape shifter Jamie Lee Dolheguy to be decided

Jamie Lee Dolheguy’s life has been described as a war within itself.

Sitting at the back of the Supreme Court of Victoria it’s hard to fathom the kind of trauma the fresh-faced woman has endured in her 20 years.

A jury of 13 has spent the past couple of weeks listening to the ins and outs of her sordid and sad life. 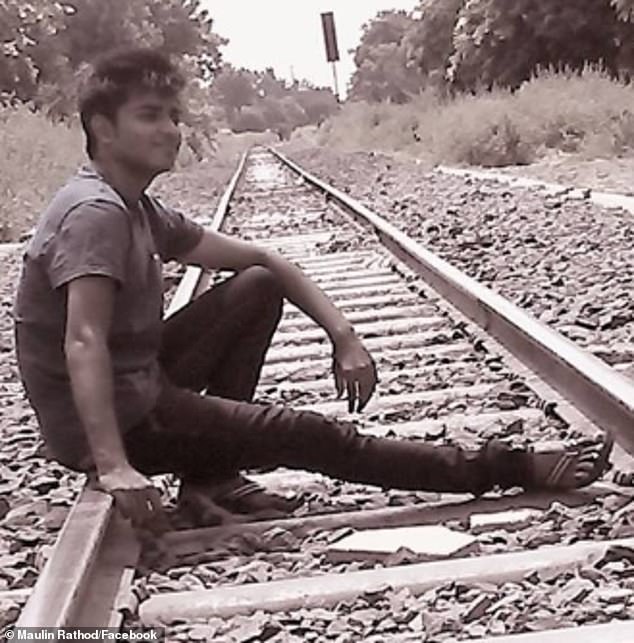 Maulin Rathod had answered a profile on a dating app. The profile stated the person was into ‘choke play’ and ‘bondage’. The profile belonged to Jamie Lee Dohleguy, who would kill Mr Rathod soon after meeting him

They have also heard the violent and calculated way she dispatched a young Indian man whom she had never met.

Pity is not an emotion that will come into the minds of those jurors when they retire to contemplate their verdict.

Justice Peter Almond has told them to ignore feelings such as ‘sympathy’.

It is an intellectual process that decides one’s fate.

But in providing the evidence required to remove any notion of ‘reasonable doubt’, the jury has been subjected to a disturbing insight into how a teenager became a killer.

To call Dolheguy a killer midway through a murder trial is somewhat unusual.

But the fact she killed Maulin Rathod in July 2018 in not disputed by her or anyone else.

The jury has sat and watched a video of the then 18-year old describe bluntly how she killed him.

Dolheguy told police she had an ‘urge to kill’ that she could not resist.

She compared that urge to someone who chose to smoke cigarettes.

He had been responding to her profile on the dating app Plenty Of Fish.

Mr Rathod ought to have known what he was getting himself into when he turned up at her Sunbury home.

Dolheguy’s profile claimed she had a borderline personality disorder and suicidal tendencies.

Dolheguy had not had a pleasant day when Mr Rathod made contact.

She felt she had been mucked about by her social workers and was annoyed her needs were not being immediately met.

Maulin Rathod tapped frantically to signal Jamie Lee Dohleguy he wanted her to release her grip. She told police she ignored him and continued to choke him until he became a ‘dead weight’ 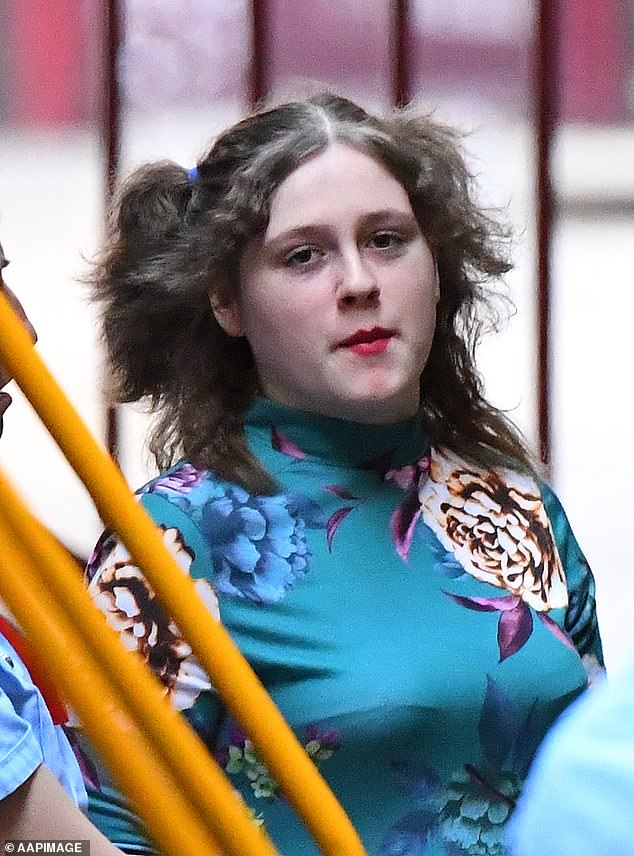 Jamie Lee Dolheguy is led into the Supreme Court of Victoria on her first day of trial last month. She had pleaded not guilty to murder amid claims she was involved in a sex game gone wrong

Dolheguy has pleaded not guilty to murdering Mr Rathod amid claims he died in a depraved sex game gone wrong.

He had agreed to be choked by Dolheguy.

He was supposed to ‘tap out’ if he felt she was squeezing too tightly.

Dolheguy told police Mr Rathod did tap, repeatedly, but she only squeezed tighter.

When he went limp she tied the cord of her sex toy around his neck and pulled even tighter.

‘He seemed to be thinking it’s all a game,’ she told police.

Dolheguy said his failure to believe she suffered from mental illness had angered her.

She was further angered when the police officer who attended to her triple-zero call appeared shocked upon seeing the dead body in her bedroom.

Prosecutors do not need to explain why Dolheguy decided to kill Mr Rathod.

Motive does not need to proven.

But a jury needs to be convinced Dolheguy knew exactly what she was doing when she snuffed the life out of her victim.

It is here the complexity of the case against Dolheguy becomes apparent.

Doctors have been brought forward to offer their opinions on what they believe was going on in Dolheguy’s mind.

To get there, the jury has been forced to endure a story of childhood abuse and misery.

Dolheguy’s barrister Sharon Lacy said by the end of the trial the jury would be satisfied her client had not meant to kill Mr Rathod. 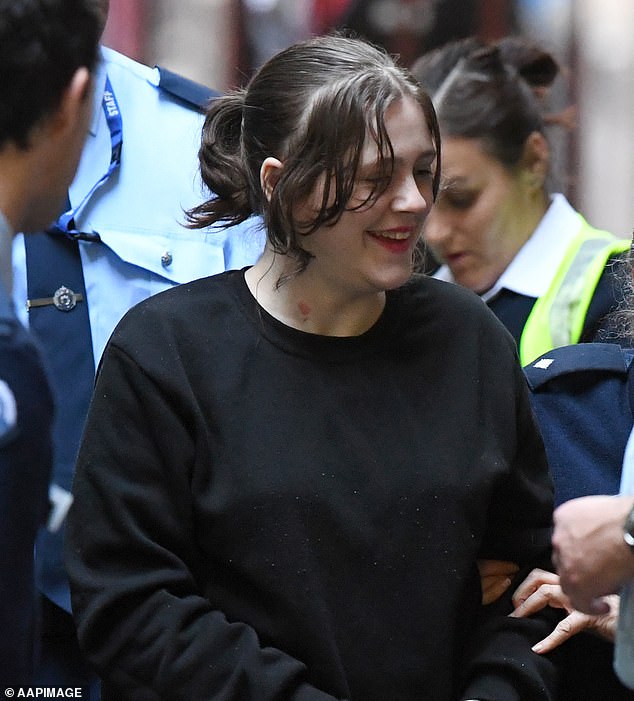 Jamie Lee Dohleguy is led into the Supreme Court of Victoria in Melbourne. The jury has watched her sit in the dock and quietly make origami sculptures as details of her wretched life have been aired

The jury has heard Dolheguy had been neglected as a child and cared for by the state since she was a 10-year old.

The level of abuse suffered by Dolheguy has brought at least one juror to tears.

As Dolheguy sits at the back of the courtroom crafting origami, her awful life has played out before her.

She was little more than a toddler when her father assaulted her mother in front of her and her siblings.

While her father was jailed, life failed to get any better for Dolheguy.

She was sexually and physically abused time and time again right up until the state stepped in when she was aged 10 and took her away.

Dr McCarthy said Dolheguy was among the most traumatised people he’d ever worked with.

Under the care of the state, two social workers were required to live with Dolheguy 24-hours a day.

She would self-harm in horrifying ways time and time again.

One time she was found at a swamp and in what was described as ‘a catlike presentation’, the Herald Sun reported.

Another time she stripped naked and climbed up a tree in her backyard.

Dolheguy would mutilate herself and jam batteries into places they were never, ever supposed to go.

She endured more than 100 operations to remove foreign bodies.

Dr McCarthy said she would self harm to elicit a ‘care response’.

While Dr McCarthy was called on behalf of prosecutors, Dolheguy’s own defence called in the opinion of forensic psychiatrist Dr Andrew Carroll.

Ms Lacy had told the jury her client explained to police she was mentally unstable on the night of the alleged murder.

‘It’s like a warzone with myself,’ Dolheguy told detectives. ‘I was hoping he would run away … call the police.”

Ms Lacy said Dolheguy told police her mind was at war within itself.

While Dolheguy claimed to be a psychopath, Dr Carroll told the jury he did not believe she suffered from psychosis ‘in any way’.

Psychosis by definition is ‘a severe mental disorder in which thought and emotions are so impaired that contact is lost with external reality’.

Dr Carroll told the jury Dolheguy knew what she was doing was wrong when she killed Mr Rathod.

The psychiatrist said he believed Dolheguy was in a ‘heightened state of arousal’ when she choked her victim to death.

‘On some level, she knew it was wrongful,’ he said. ‘She understood the acts she was engaged in were wrong.’

Dr Carroll said Dolheguy was in a state of turmoil and fought against the ‘urge to harm’ but had a ‘residual awareness’ that choking Mr Rathod would likely kill him.

He told the jury Dolheguy could experience extreme levels of anger over trivial matters.

‘Not just anger, heightened levels of arousal,’ he said. ‘Pathological rage … it’s a notch above anger.’

After killing Mr Rathod, Dolheguy searched online for directions to a location in country Victoria, and ways to be admitted into hospital.

The trial is expected to come to its conclusion this week.