Father, 47, is given 30 years in prison for taking explicit photos of his one-year-old daughter

A father from North Carolina was sentenced to 30 years in after he admitted to investigators that he took sexually-explicit photos of his 20-month-old daughter and shared them with others online, authorities said.

An undercover investigation also found that Robin Christopher Hildred, 47, had more than 2,200 images and a dozen videos of child pornography at his home in Raleigh.

The disgraced dad was sentenced to 360 months in prison on Friday by US District Judge James C. Dever, III, and faces a lifetime of supervised release once he gets out.

The ‘sentence ensures he cannot victimize any more children for the next 30 years’ said Robert J. Higdon, Jr, US Attorney for the Eastern District of North Carolina in a released statement.

Investigators first zeroed in on Hildred after he ‘expressed sexual interest in infants and toddlers,’ in an online chat room set up for discussing child pornography, according to the statement.

Hildred allegedly photographed the baby girl’s private parts ‘for the purpose of sexual gratification,’ according to his arrest warrant.

A forensic examination of devices seized from his home uncovered 2,299 image files and 12 video files of child pornography that were created in his home on multiple dates from December 2017 to April 2018, authorities said. 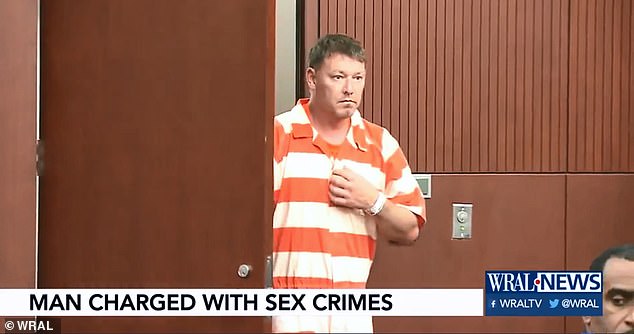 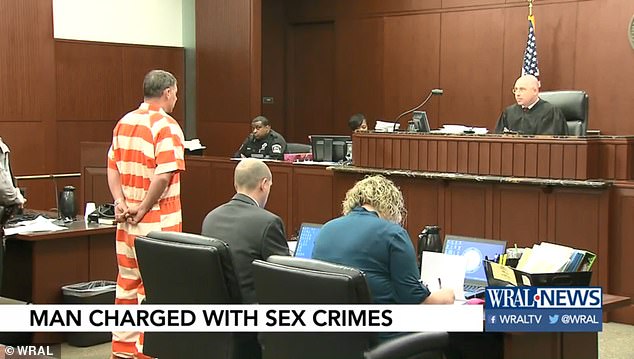 The examination also confirmed that the sexually explicit images of his daughter were produced by Hildred’s phone.

‘Robin Christopher Hildred is a predator who victimized countless children through his distribution and possession of child pornography,’ said the US attorney.

‘But, perhaps even worse, he preyed upon his own vulnerable daughter. The man who should have been caring for and protecting her, exploit her in the most disgusting and tragic way.’