An American Airlines pilot and his adult son were killed in a plane crash in Missouri on Thursday night after experiencing what is believed to be electrical issues.

The crash occurred around 10.30pm, moments after the pilot sent his fiance a text message asking her to come down to the Festus Memorial Airport with flashlights to light the runway so he could see where to land.

Mike Bippen, vice president of the Festus airport, said the father and son purchased the single-engine aircraft from an individual in New York and traveled there on Thursday to bring the plane back to Festus.

According to Fox2, the plane is registered in Collins, New York.

Bippen said the father and son planned to restore the aircraft, and the son wanted to start taking flying lessons to become a pilot. He said the father already owns a plane and was an experienced pilot with American Airlines.

It’s not clear if the father had retired or still flew with the company. American Airlines has not confirmed that the pilot killed in Thursday’s crash was an employee.

According to officials, the aircraft started having issues around 9 or 10pm as the pilot was coming in. It’s believed that the father was experiencing electrical issues preventing him from using his radio or accessing the runway lights, which the pilot turns on from the aircraft.

‘So he couldn’t really tell how fast or elevation or anything,’ Bippen said, ‘unless he was using his phone as a light.’

The pilot was in communication with his fiance, officials confirmed. Moments before the crash, he sent her a text asking if she could come down and light the runway at Festus with flashlights.

Without the runway lights on, the pilot would not be able to see where to land.

‘The runway lights are triggered by the pilots flying in,’ Bippen explained. ‘You click your mic six times and the runway lights come on for 15 or 20 minutes. … If he had electrical problems on the plane he would not have been able to click on the lights.’ 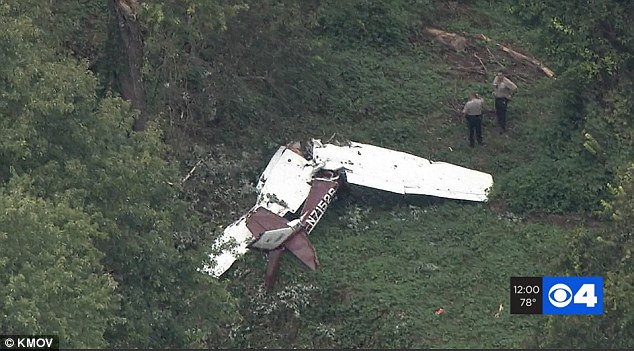 The father, a pilot with American Airlines, texted his fiance to bring flashlights to the runway moments before the crash

According to Bippen, it’s standard procedure for smaller airports to turn off the runway lights at night.

He said he believes the plane went down around 10.30pm. Rescuers tried to locate the aircraft on Thursday night but couldn’t find it. It was found early Friday morning near a creek, according to video from KMVO4.

The crash is being investigated with more details expected to be released. Police have not yet released the names of the victims. The father is said to be in his 50s and the son in his 20s.