Father and son take migrant crisis into their own hands

A father and son have begun their own patrols of shores near Dover in exasperation at the failure to stop migrants crossing the Channel.

Mechanic Chris Morris, 54, and tree surgeon Lewis Morris, 30, decided to take matters into their own hands following a spike in incidents. With a small boat on the back of a trailer, the pair from Ringwould, Deal, spend most evenings patrolling a ten-mile stretch to Dover.

They saw a dinghy carrying six Iranian men being met by border officials on the beach at Kingsdown at about 7.30am yesterday.

Mechanic Chris Morris, 54, and tree surgeon Lewis Morris, 30, decided to take matters into their own hands following a spike in incidents

‘It was quite a shock to see them,’ Chris said. ‘They were soaking wet and must have been freezing.’ Lewis added: ‘They were all very well dressed and looked in good condition, well fed and some had smart Nike trainers on.’

They took photographs of the incident. Chris said of the patrols: ‘We just do it because not enough is being done. We are not out to change the course of history, we just worry that one day there will be a body washing up on the beaches.

‘Also, we don’t know who these people are. Some may not be here fleeing persecution or seeking asylum.

‘We could end up with terrorists on our shores, or criminals. Things have got so far out of hand, I think there are probably twice as many crossings as we are told about.’ 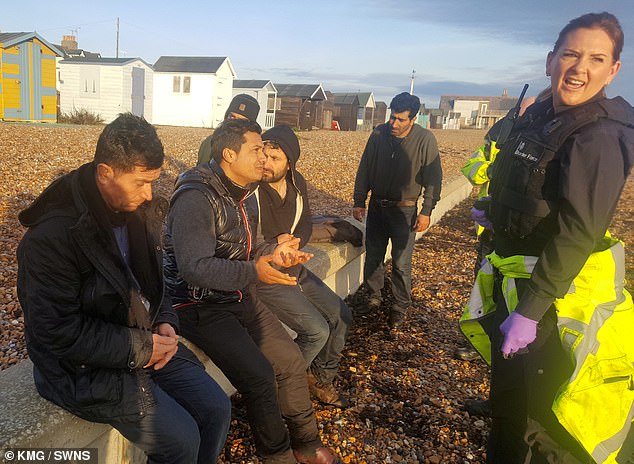 Relentless task: A Border Force officer with some of the migrants on Kingsdown beach early yesterday