Father attacks jogger at Parkville, Melbourne park claiming he was too close to his family

Shocking moment a father attacks a stranger jogging in a park after accusing him of not socially distancing from his family – while woman tries to break up the assault and a child screams ‘Mum!’

Confronting footage has captured the moment a father attacked a jogger in a park after accusing the man of not socially distancing from his family.

The victim, who identified himself as Simone, was running through the McAlister Oval in Parkville in Melbourne’s inner-city on Thursday morning when he was confronted by the man.

The video showed the man launching at Simone before repeatedly kicking and kneeing him in the head.

Simone was running through the McAlister Oval in Parkville, in Melbourne’s inner-city on Thursday morning when he was confronted by a man and his partner

The man’s partner screamed out ‘stop it’ as she tried to pull him away and Simone was knocked to the ground.

A child calling out ‘Mum!’ can be heard in the background.

Simone said the couple had demanded he stay away from them and their two kids, Nine News Melbourne reported.

‘I was so far away from them and this guy deliberately hit me without any reason,’ he said. 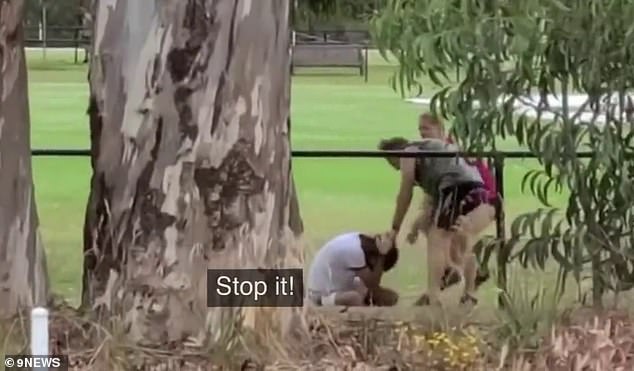 The man unleashed on Simone, repeatedly kicking and kneeing his head while his wife tried to drag him away 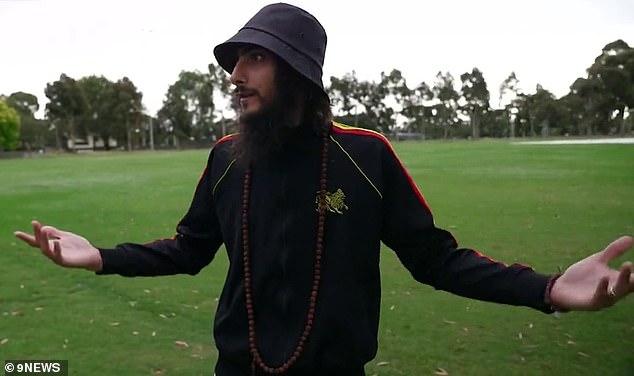 ‘They were saying to me that I was a danger to the community that I should have stayed away from them and I really don’t know why – I was just running.

Police say they have not received an official complaint about the attack.