Father Christmas impersonator, 67, who tipped the scales at 21 STONE

A 21-stone man, who dresses up as Father Christmas, reveals how he shed 5st by ingesting a balloon, within a capsule, that was then inflated in his stomach with liquid.

Michael Mackie, 67, Hampton, London, noticed the pounds beginning to pile on when an agonising back condition made it more and more difficult to move.

At his heaviest he tipped the scales at 21st. While his extra heft helped him land a job as Father’s Christmas at a Santa’s Grotto in 2016, it left him feeling ‘depressed’ as he found himself spending more time indoors.

In a bid to lose weight, Michael splashed out £3,200 for a radical, new weight loss treatment called the Elipse Balloon.

Before: Michael Mackie, 67, Hampton, South west London, noticed the pounds beginning to pile on when an agonising back condition made it more and more difficult to move 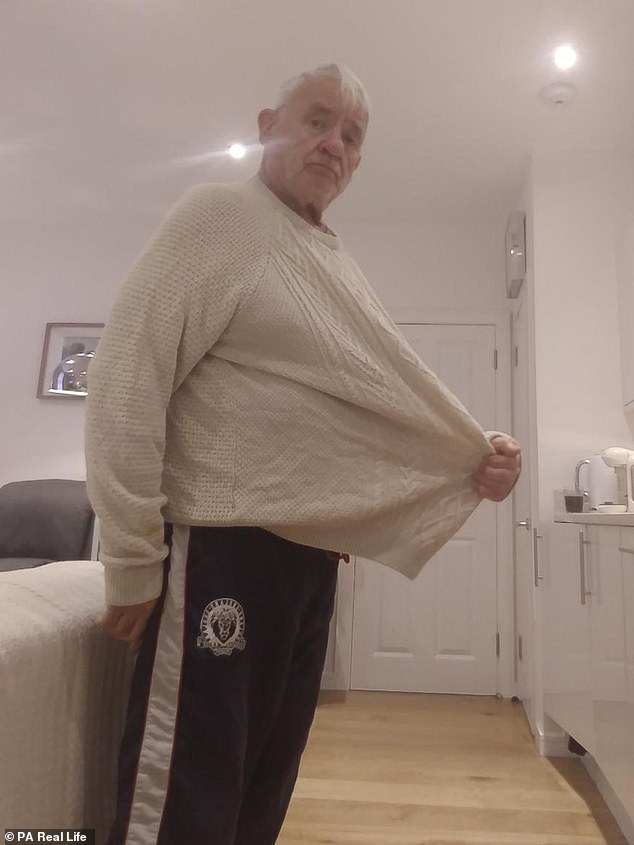 After: In just 20 weeks he shed five stone and 10 inches from his previous 48-inch waist by swallowing weight loss balloon

The weight loss aide is swallowed within a capsule, attached to a tube, which was then filled with liquid to keep his stomach feeling full.

And, in just 20 weeks shed five stone and 10 inches from his previous 48-inch waist.

Now he has to wear a fat suit to make himself look like Santa.  Michael said: ‘I had the balloon put in August 2018, and by Christmas I had lost so much weight that my boss said to me, “Michael, you’re so thin! We’ll have to put you in a fat suit now”.

‘Some people might have been offended by that, but I was ecstatic to hear it.

‘Before, I was so big that I had a lot of difficulties with mobility and there were days when I wouldn’t be able to leave the house.

‘Now though, I feel like I have my life back again.’ 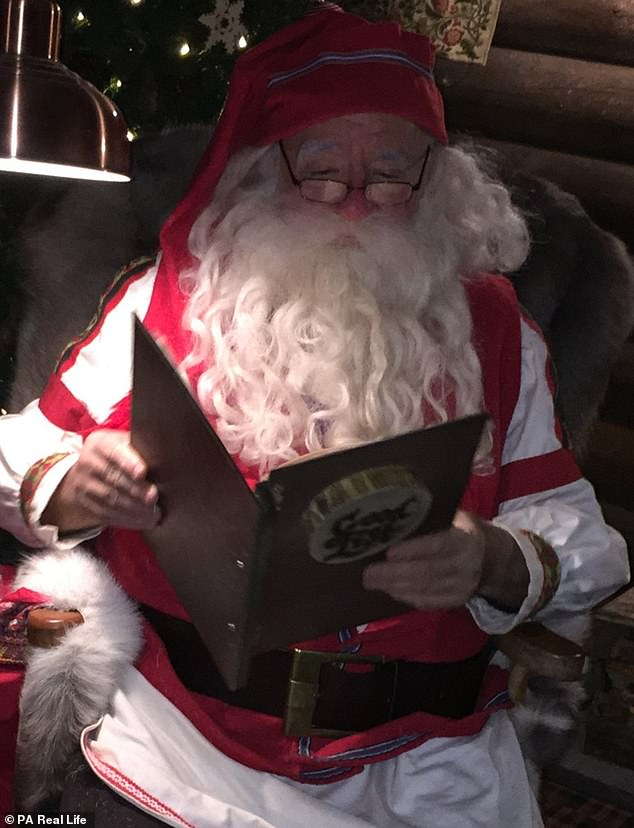 He lost so much weight that by December 2018, he needed extra padding in order to transform himself into Santa

Micheal, just after swallowing his balloon  – he started to lose wight almost immediately after

In his younger years, Michael, who has two daughters, secretary Fay, 41, and sales manager Gemma, 39, with his ex wife, was slim and active.

Working as a children’s entertainer since he was 33, he was constantly on the move, doing three to four shows a day.

But then, everything changed in 2012, when his back began to suffer following a knee replacement that caused him to limp.

Then, weeks later, he was diagnosed with both a heart murmur, and a degenerative spine, where the discs between the vertebrae wear down causing severe back pain. 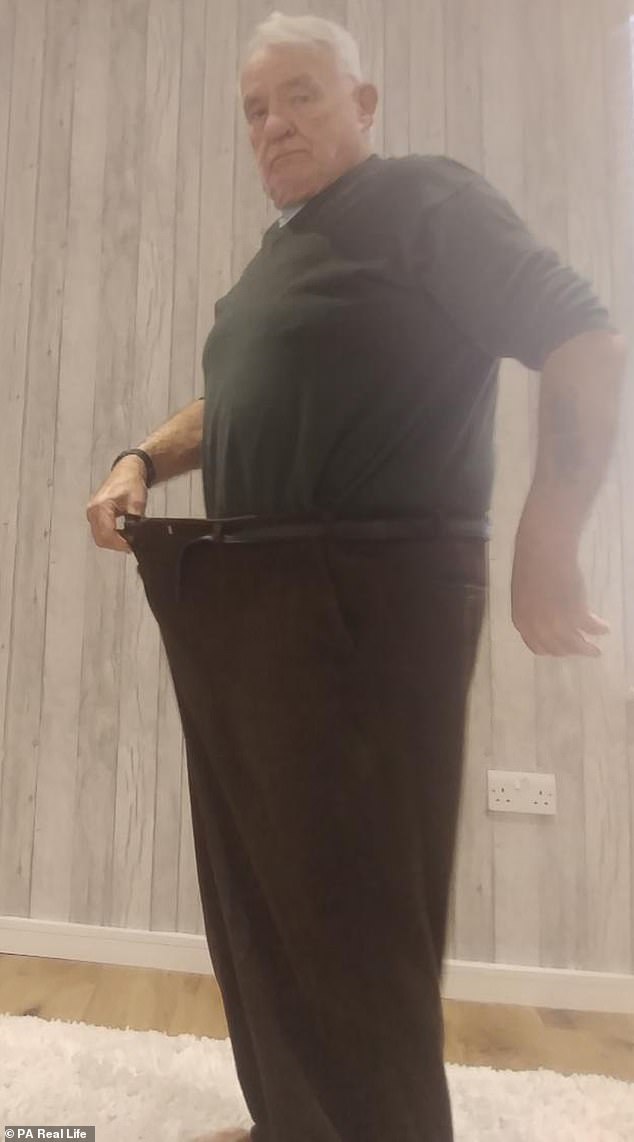 After three months, the balloon naturally deflated and passed out of his body, by which time he had lost four stone and had ‘re-programmed’ his dietary thinking, leading to him losing another stone in the months that followed 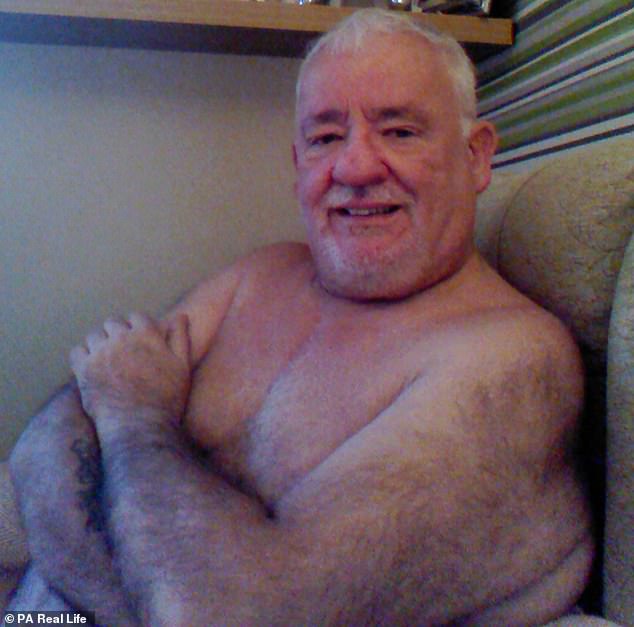 Everything changed in 2012, when his back began to suffer following a knee replacement that caused him to limp

Languishing at home and experiencing difficulty moving, his weight gradually rose from 18 to 21 stone over the course of the next few years.

He said: ‘I was pretty much housebound much of the time, as the weight gain made my spinal problems worse.

‘Having been active and doing three or four shows a day during my working life, it was terribly depressing to be sat at home all day just looking out of the window. 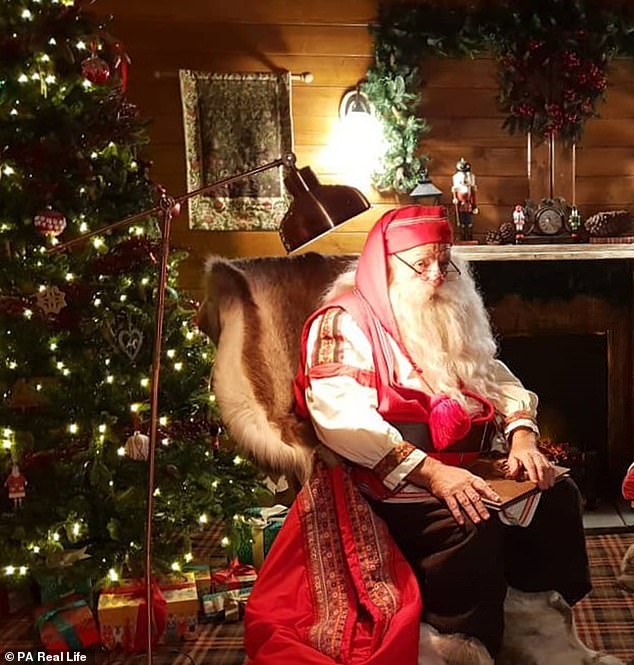 ‘Then I started comfort eating, eating purely out of boredom, whereas when I was working I would only grab a light meal between shows.’

In a bid to keep his spirits up, Michael decided in December 2016 to apply for a job as a Father Christmas impersonator at the racecourse in Ascot – and landed the role of ‘the big man’ right away.

‘It was great to get back to what I know and do best,’ continued Michael, who was kept on in the role following the success of his first festive season.

‘And even though it was a bit of a struggle sometimes getting there because of my mobility problems, I willed myself on to do it because I was desperate to keep active in some way.’ 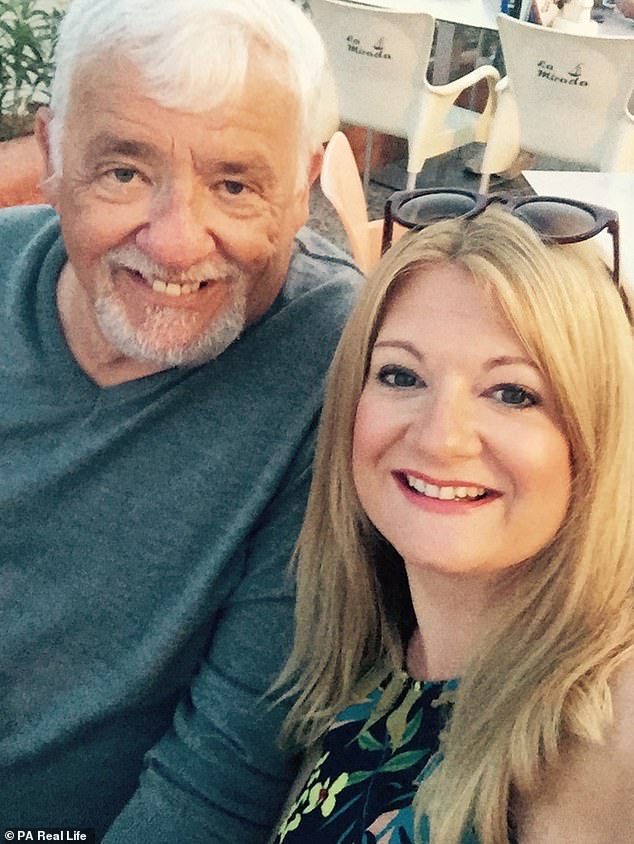 By 2015, he was so unwell that, aged 63, he was forced to take early retirement. Pictured with his daughter

But still spending most of the year feeling trapped in a vicious cycle of rising weight and decreasing mobility, Michael decided that he needed to slim down somehow.

He attempted to eat healthily, dieting on large quantities of fruit, but said it made little difference, and so he looked into surgery instead.

Having only ever heard of gastric bands – a procedure which ties a band around the stomach, meaning it does not take as much food to feel full – he investigated options abroad, where the surgery was half the price compared to the UK, where the operation can cost as much as £8,000.

He said: ‘I wasn’t overweight enough to qualify for the getting procedure done on the NHS, and it was going to be quite expensive to have done privately, so I was considering having it done abroad. 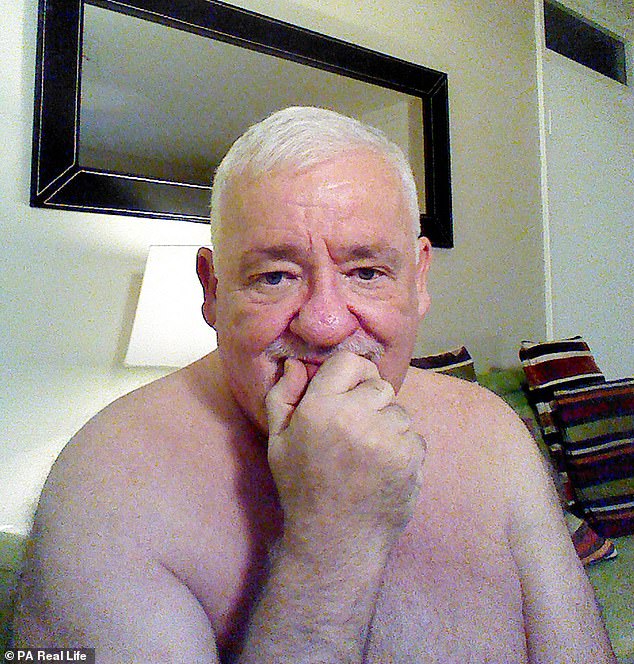 Michael would eat between three and four thousand calories each day, through sugary fruits and fatty cooking oils

‘But I spoke to my daughters about it and they said that it may not be a good idea.’

Then, one day in July 2018, bariatric surgeon Simon Monkhouse – who Michael had previously been in contact with – suggested the new Elipse Balloon treatment, which would not require going under the knife, and would cost the comparatively small sum of £3,200.

Three weeks later, Michael was sat, completely conscious, in an operating theatre in Spire Gatwick Park Hospital, Horley, Surrey, swallowing a capsule-encased-balloon, which was then inflated with liquid in his stomach. 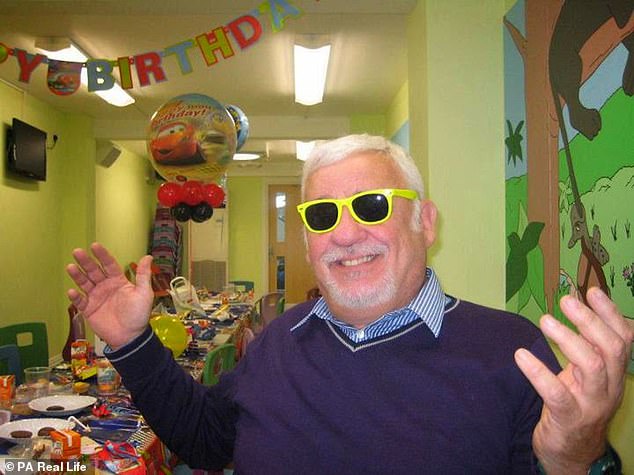 He will don a fatsuit this Christmas too and says: ‘It was the best money I’ve ever spent. I feel I’ve got my life back

He recalled: ‘I really didn’t feel a thing, and I was out within an hour.

‘After that, I had very little appetite and would eat only around a quarter of what I’d eaten before.

Eating only soup, fish and sometimes chicken, Michael saw his weight – which was closely monitored by his doctors using Bluetooth technology that kept them closely informed – drop further. 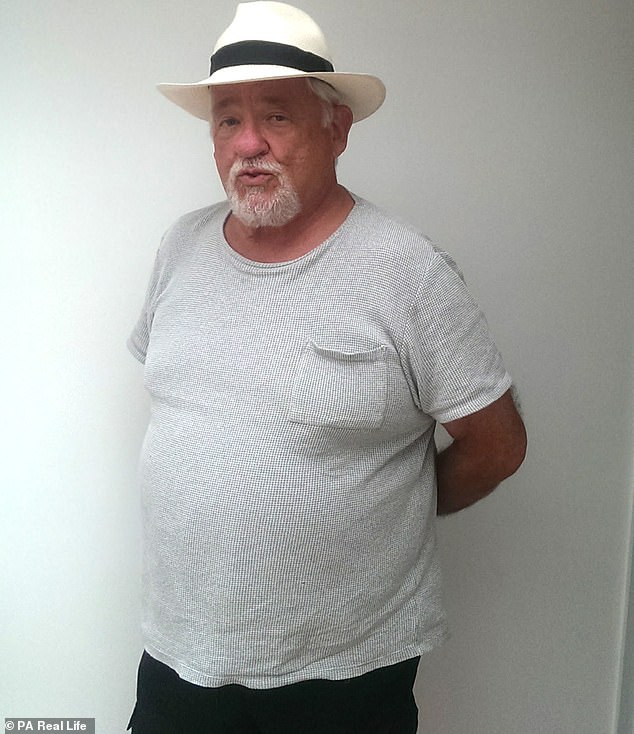 he hit his heaviest weight, tipping the scales at 21-stone – although his bulk did come in handy when he landed a job as a Father Christmas impersonator in 2016

What is a Elipse Gastric Balloon?

The Elipse Gastric Balloon is swallowed while enclosed in a capsule attached to a hollow plastic tube.

A doctor uses ultrasound to check the balloon is correctly positioned, and it is filled, via the tube, with almost a pint of water. Finally, the tube is detached and removed.

After 16 weeks, a valve sealing the device dissolves and the balloon deflates. It then passes through the intestines and out of the body.

The novel device is likely to appeal to those who are only modestly overweight, as it is being marketed at those with a Body Mass Index (BMI) of 27 or more – only two points over the ‘healthy weight’ threshold.

After three months, the balloon naturally deflated and passed out of his body, by which time he had lost four stone and had ‘re-programmed’ his dietary thinking, leading to him losing another stone in the months that followed.

By last Christmas, his body had transformed so much that he could no longer rely on his own natural stuffing for the seasonal Santa job, and had wear artificial padding.

Adding that he will don a fatsuit this Christmas too, Michael concluded: ‘It was the best money I’ve ever spent. I feel I’ve got my life back.

‘I can walk a lot better than before, and going out the house is not a strain like it used to be.

‘The only downside is I have had to buy a completely new wardrobe as all my old clothes just hang off me.

‘It’s a small price to pay though as now I can finally start to enjoy my retirement.’