A doctor has confirmed a six-year-old girl’s injuries as a ‘reaction to chlorine’ after her father accused travel group Thomas Cook of poisoning a swimming pool and causing burns to her skin.

Isabelle’s father Dr John Wheeler said a chemical was added directly to a paddling pool – and shared a video he claims prove it. And a report on her injuries was then conducted by Dr A S Khan at Silverdale Village surgery in Newcastle on August 4.

She suffered burns to her feet, hands and knees at the Pefkos Beach Hotel, Rhodes in July. 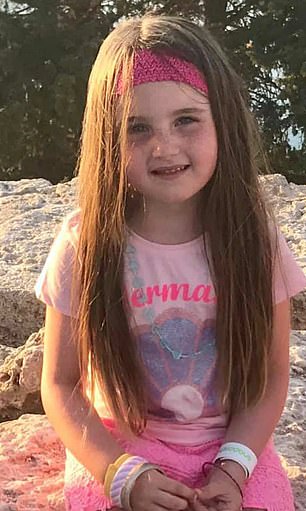 And another family have also claimed their child suffered chlorine burns after playing in the pool.

Dr Wheeler, his wife Francine and their children traveled from their home in Newcastle-under-Lyme, Staffordshire, to Rhodes on July 20.

Isabelle, 6, started ‘coughing violently’ and developing red painful blisters to her feet and hands, according to Francine.

The 45-year-old mother took to social media when they failed to get a satisfactory response from the travel company.

She shared images of her daughter covered in scabs: ‘So, with what I believe is sufficient time to allow Thomas Cook to commence their investigations, I have decided to share a video in the photos below of the hotel worker throwing chemicals (likely to be calcium hypochlorite) into one of the pools.’ 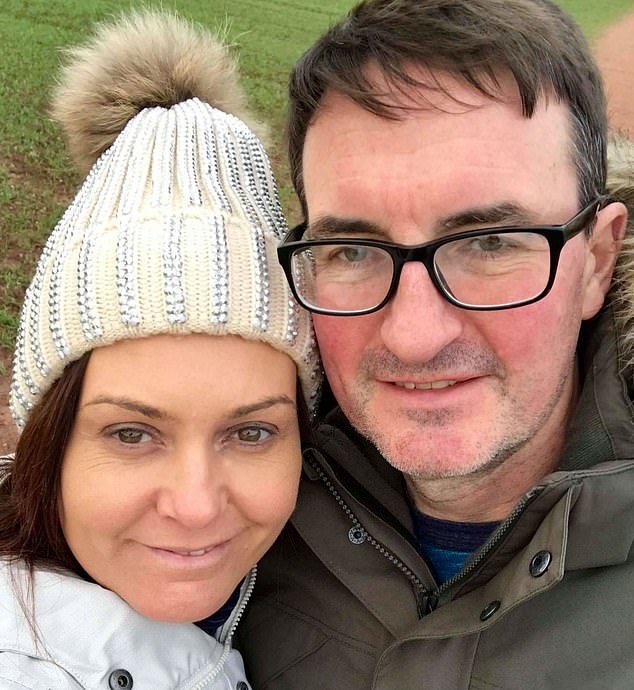 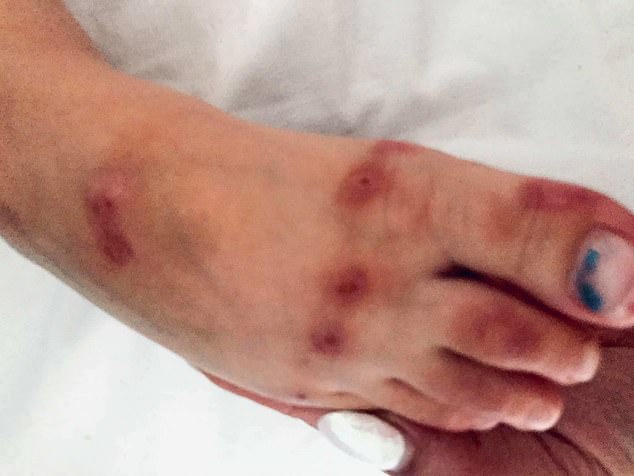 Isabelle, 6, as left in pain with raw blisters spreading across her feet while on holiday at the Pefkos Beach Hotel, Rhodes, in July 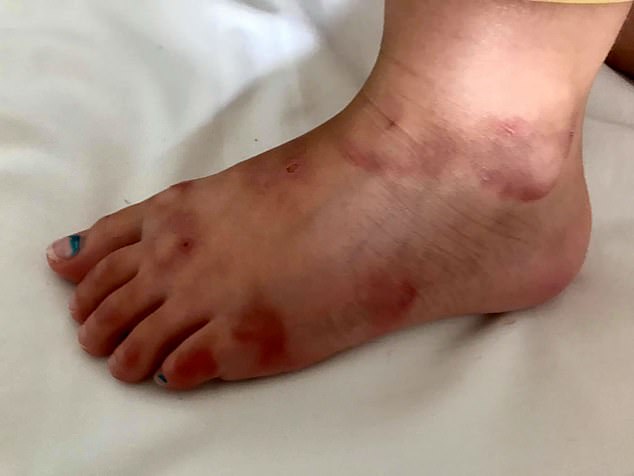 Her father Dr Wheeler said the chemicals failed to dissolve after their application at 7pm every evening. This meant they was ‘still present’ the following morning and children kneeled, stood and crawled in the paddling pool

A video shows her daughter ‘crying out’ after a coughing fit, just two days after the incident was reported.

She said: ‘Everyday she wanted to play in the paddling pool and we had no idea it was making her ill.’

‘We also thought that her constant tiredness was caused by the heat. Nobody is talking to us despite the fact that we’ve submitted a comprehensive report with photographic and medical evidence. Not even a query to check that she is okay.’ 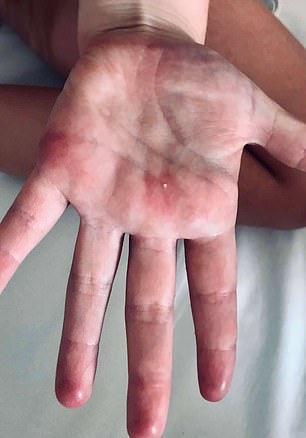 Mother Francine Wheeler, 45, said her daughter wanted to play in the paddling pool and ‘we had no idea it was making her ill’

A video shared by Francine shows a hotel employee dumping a white powder directly into the water as Isabelle can be heard screaming in pain in the background.

Dr Wheeler, who has a PhD in chemistry and works Staffordshire University, sent a statement to Thomas Cook, stating: ‘It was observed that, each evening at around 7pm, an operative would cast scoopfuls of chemicals, most likely to be Calcium Hypochlorite, directly into the water of each pool.

He said it would be ‘more normal practice’ to pour the chemicals through a pump system to ‘avoid potential contact with public areas’. By adding the materials directly into the pool had ‘led to the injuries described’.

The chemicals were supposed to sink and dissolve through the water which was only 40cm deep but it was ‘still present’ the following morning and children kneeled, stood and crawled directly onto this, according to Dr Wheeler. 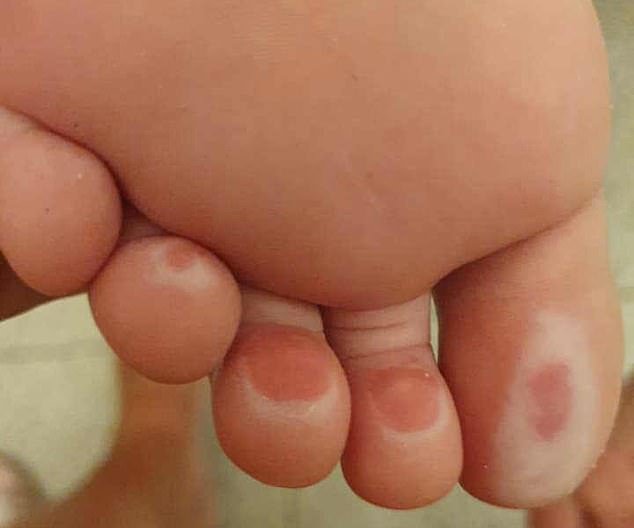 Children ‘stirring up the water’ also released chlorine gas which was breathed in and ‘led to respiratory issues’.

Dr John Wheeler’s letter to Thomas Cook about his daughter

It was observed that, each evening at around 7pm, an operative would cast scoopfuls of chemicals, most likely to be Calcium Hypochlorite, directly into the water of each pool.

It would be more normal practice to introduce these chemicals through the filtration and pump system for the pools to avoid potential contact with public areas. Treating the ‘small’ pool by adding this material directly is especially inappropriate and led to the injuries described above and herein.

The chemicals were observed to sink through the water, which was only 40cm deep, and sit on the bottom of the pool without dissolving or dispersing. This was still present the following morning when children entered the pool, who then stood, kneeled and crawled directly on the corrosive chemicals thus causing the burns and pain experienced.

In addition, the dissolution of the chemicals brought about by the children stirring up the water also resulted in the release of chlorine gas that was then breathed in directly by the same children, and led to the respiratory issues.

Lisa Kay, a nurser from Burnley in Lancashire, also claims her 5-year-old daughter Hollie suffered burns from the same pool.

She shared images of Hollie’s mottled legs and blistered feet which she says started to bleed, on Facebook.

Michelle Studd added: ‘Shocking to see them just throwing chlorine in and not testing water.’

And Melanie Hughes replied: ‘This has deeply upset me for you all. Those burns are horrendous and your baby’s screams display this. I’m sure you will fight on and get justice for your baby girl. Shameful of the holiday providers to brush you off – absolutely disgusting. Love to you all.’

Speaking today, Francine said: ‘The only reason this came to light is because my husband is a Doctor of Chemistry and observed the methodology used to clean the pool.

‘As you might imagine it has been an horrendous ordeal for my daughter and our family.’

Thomas Cook responded to Francine and they were unable to answer her queries ‘due to legalities’ and said their query is ‘in the queue’ to be picked up by the Customer Service Incident Team.

The travel agents spokesman said today: ‘Our customers’ safety is always our first priority and we take all reports of injury very seriously. Initial tests carried out by the Pefkos Beach Hotel showed normal water levels but as a precautionary measure we requested that the pool be emptied and deep cleaned.

‘We are very sorry for the concern this must have caused the Wheeler family and our team are contacting them so that we can look into what happened further.’