Father finds kidney donor after printing plea on a t-shirt

A father-of-five has received a life-saving kidney transplant after printing his plea for a donor on a t-shirt and wearing it for nine consecutive days.

Rob Leibowitz, 60, was suffering from chronic kidney disease and on a donor list for two years when he printed ‘In Need of Kidney’ with his phone number on a t-shirt and wore it while on a family vacation to Disney World last summer.

A photo of the shirt was posted to social media and within days caught the attention of Richie Sully, a 39-year-old father-of-two from Indiana, who reached out to the single father from New Jersey offering to donate.

After months of traveling to New York for tests, results revealed the men were perfect matches and they underwent successful transplant surgeries last week that saved Robert’s life.

Robert Liebowitz, 60, wore this t-shirt for nine days in Disney World because he desperately needed a transplant due to his chronic kidney disease 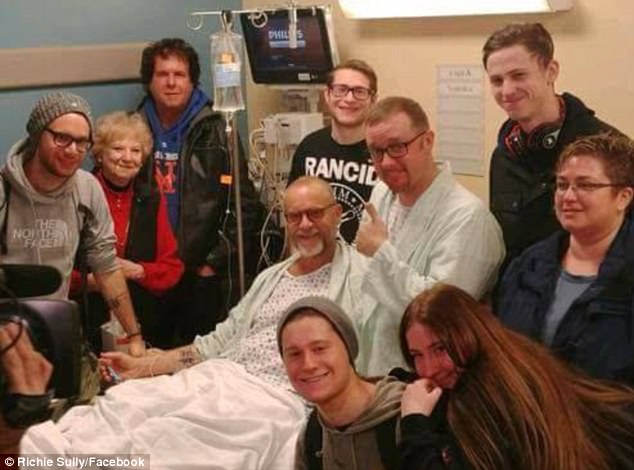 Robert and Richie Sully, a 39-year-old father-of-two from Indiana, underwent successful transplant surgery on Thursday after Richie saw a photo of the t-shirt on Facebook 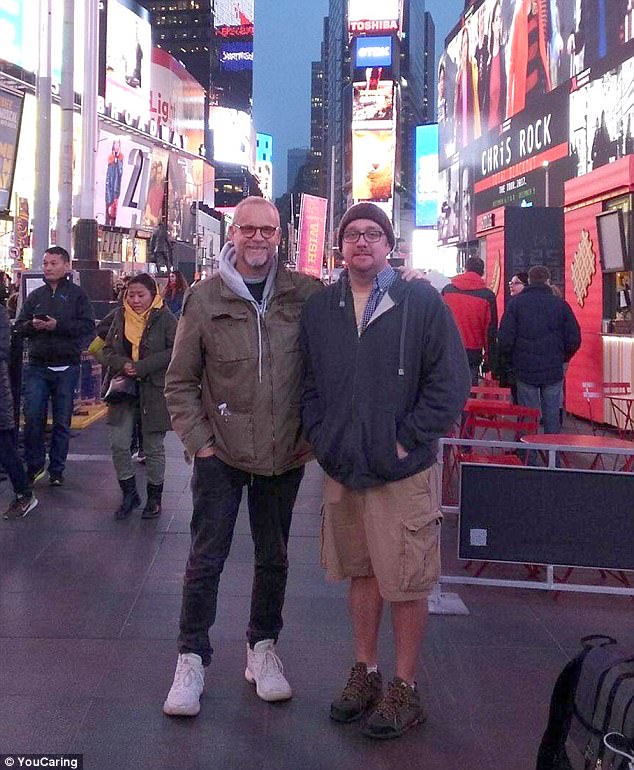 Rob was put on the transplant list for a new kidney in 2015 when doctors told him it would only be a matter of time until the organs shut down.

With a waiting period of at least seven years, his doctors urged him to find a donor as soon as possible in order to save his life.

After Facebook posts searching for a donor came up short, Rob spent 35 dollars to get a t-shirt printed that said he is in need of a kidney, his blood type is O positive and to call the number printed.

He wore the t-shirt for nine days straight while on vacation with his family to Disney World in Orlando, Florida.

‘I thought, you know, if I can get one person who’s my blood type to just respond and maybe that’s my match, you know, it’s worth the 35 dollar investment for the shirt,’ Rob told CBS.

A couple approached Rob at the park asking to take a photo of his t-shirt and for permission to post it to Facebook.

Within the first week, the post had 90,000 shares and his phone rang nonstop.

While sitting in a chair in Indiana to donate blood, Richie Sully saw the post and called Rob, unsure if they would be a match.

WHAT ARE THE SYMPTOMS OF KIDNEY DISEASE?

Kidneys filter out waste products from the blood before converting them into urine. They also help maintain blood pressure.

Chronic kidney disease (CKD) is a long-term condition where the kidneys do not work as well as normal.

The risk of CKD increases as you age.

The main symptoms of advanced kidney disease include tiredness, swollen ankles or hands, shortness of breath, nausea and blood in urine.

Those with the condition have a greater risk of having a stroke or heart attack. It can also cause kidney failure, when sufferers will need to have dialysis and possible transplant.

However, lifestyle changes and medication can stop it getting worse if it’s diagnosed at an early stage.

On a fundraising You Caring page, Richie wrote that he left a voicemail on Rob’s phone that said: ‘Hey, you don’t know me, but I saw your post, I’m O+, I have an extra kidney, and you’re more than welcome to have it. Also, I’m not crazy. Or on drugs. Oh, but I am in Indiana.’

Richie made several trips to New York where the two strangers finally met and underwent loads of tests to find if they were a match.

After months of blood tests, urine samples, psychological evaluations and x-rays, Rob learned he had found the perfect match.

‘I broke down and I screamed but of course screaming in New York, everybody ignores you anyway,’ Rob said.

Rob said that Richie has saved his life and ‘he’s giving me more time with my kids.’

Richie said: ‘As a father, the one thing I want above all else is more time with my beautiful daughters. That’s exactly what I’m giving this man.’

Kidney disease is the ninth leading cause of death in the US and about 31 million Americans suffer from the disease.

Those with the condition have a greater risk of having a stroke or heart attack and it can lead to kidney failure.

Rob developed the disease after having a severe kidney infection when he was 12 years old.

After years of being on medication, his kidneys began to shut down.

Lifestyle changes and medication can stop the disease from getting worse if diagnosed early.

However, if the kidney continues to deteriorate, sufferers will need to use dialysis or in Rob’s case, have a transplant. 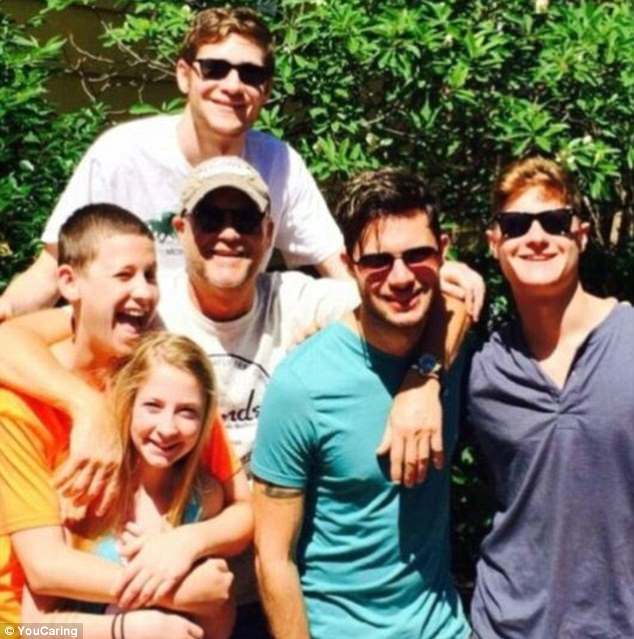 The father-of-five from New Jersey is thankful for Richie because he not only gave him a kidney, but more time with his children