A father-of-three who saved the life of a cancer patient who was in desperate need of a bone marrow donor was flow 6,600 miles around the world by his grateful recipient.

Milton Becker, 69, from Alberta, Canada, was in need of a suitable match when a two-and-a-half year global search linked him with Emyr Williams, 54, from Lampeter, Wales.

Mr Williams, who was a near-perfect match, was flown to Canada and his bone marrow was given to Mr Becker, who was declared cancer free.

After being linked to his donor by the donation database, Mr Becker invited the retired carpenter to Canada for a two week $15,000 (£8,835) trip around Alberta and the Rocky Mountains. 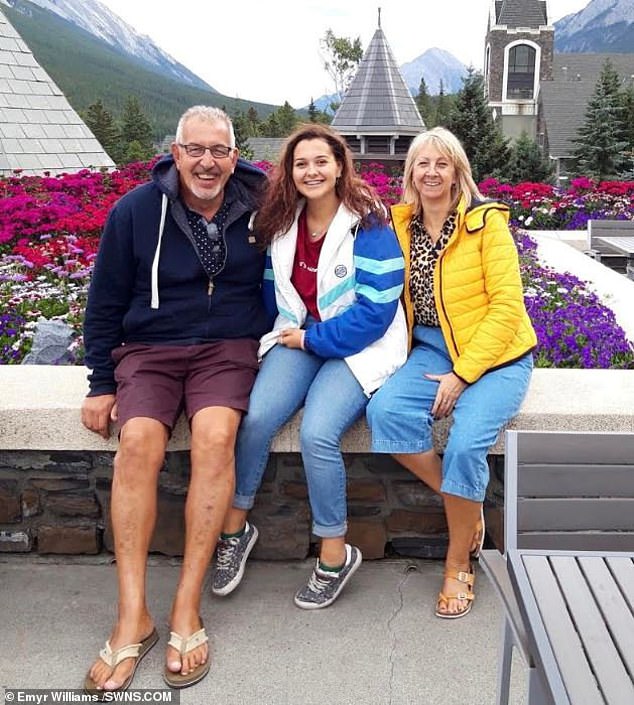 Mr Willaims (left) was flown out with teenage daughter and wife to Alberta, Canada, for a two week $15,000 (£8,835) trip around Alberta and the Rocky Mountains 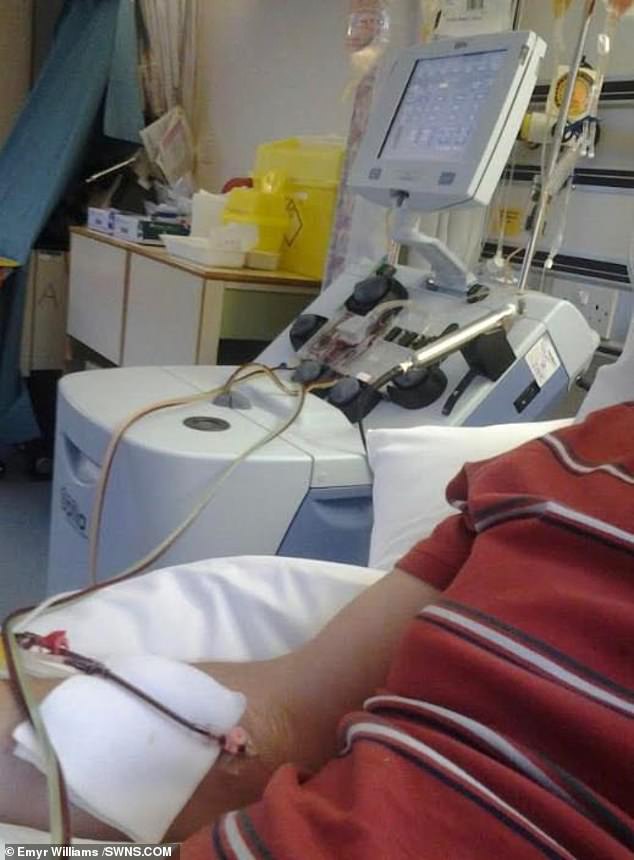 Meeting him for the first time at the airport, wearing a Welsh dragon T-shirt and a Wales flag, they formed an instant bond.

Mr Williams said: ‘It was surreal to be out there. There’s this bond between us like no other. It was only when we went out there that we really understood how close to death Milton was.

‘One of his friends said he had been finalising plans to be at his funeral. He was literally on death’s door.

‘For something that required no real effort at all saved that great man’s life. And to have the pleasure of meeting him in the flesh and to be introduced to his family was just an honour.’

Grandfather-of-two Mr Becker added: ‘We got on so well and I just thought I’ve got to thank this guy. I didn’t want him to spend a penny. It was my treat.

‘It’s not about the money. What he did was priceless. I’m forever indebted to the guy.’

Mr Becker was diagnosed with stage 4 leukaemia in 2010 but after unsuccessful chemotherapy he was told a bone marrow transplant was the only means of survival.

In early 2013, Mr Williams – who had been registered on the blood transfusion register for several years – was found to be a near-perfect match. 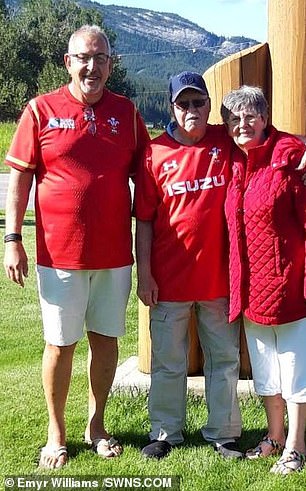 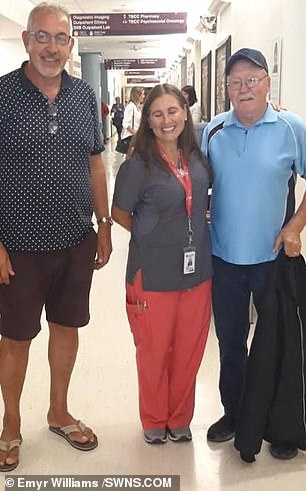 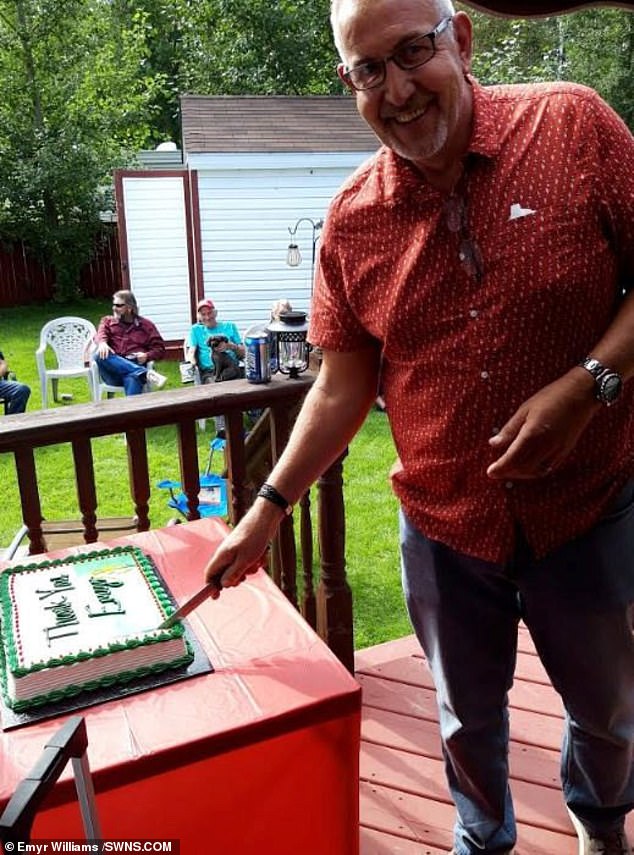 After meeting Mr Becker for the first time the father from Wales said the pair formed ‘an instant bond’. Pictured: Mr Williams cutting a Thank You cake made for him while in Canada 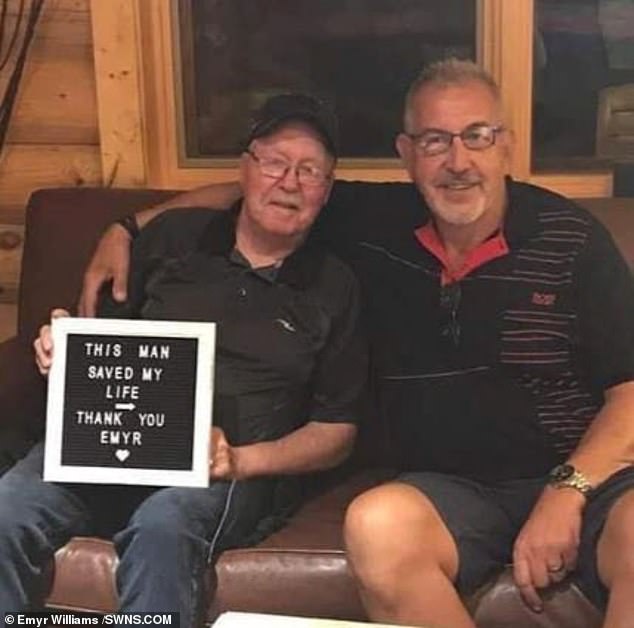 After making contact via a donor database, the pair added each other on Facebook and soon became good friends

He said: ‘A lady called me one day to say ‘would you be interested in donating your stem cells?

‘She went on to say there was a guy in Canada with leukaemia and that I was a 99.9999 per cent match with him. I just thought why not.

‘It doesn’t cost me anything and it can really change somebody’s life.’

The bone marrow was flown from Wales – with Mr Becker receiving his long-awaited transfusion on his 63rd birthday, on February 1 2013.

Former oil company lorry driver Mr Becker said: ‘What he did was completely priceless. There’s no better gift than the gift of life. And to get that on my birthday, well, it was a great feeling!’

A year after the transfusion Mr Becker was told he was on the road to recovery but was kept in remission and monitored by doctors for the next two years. 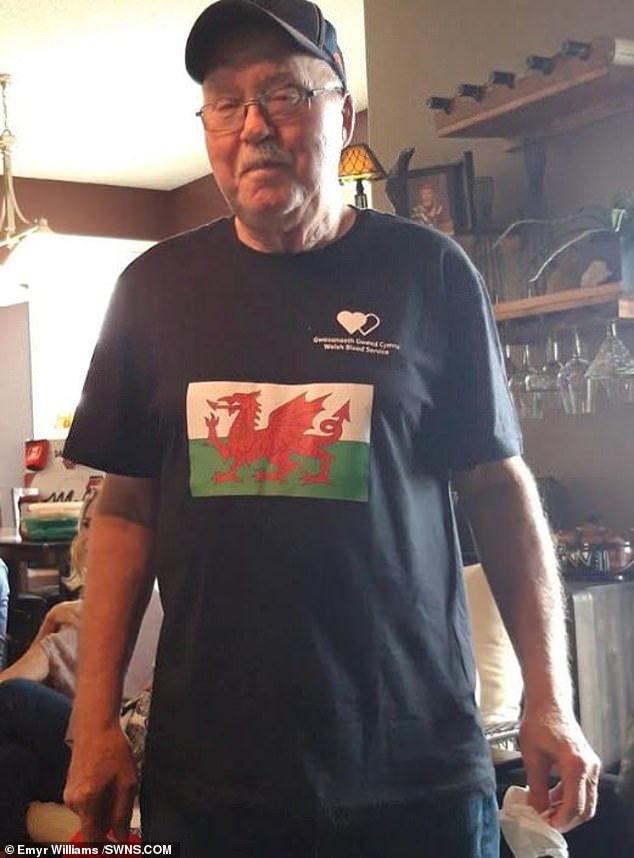 In 2016, three years after the blood transfusion, he was deemed cancer-free.

It led nurses to ask the grandfather if he would like to know who his donor was – which he accepted straight away.

They got in touch with Mr Williams – who’d been given bi-annual anonymous updates – who agreed his details could be passed on.

Mr Williams said: ‘A few days later I had this call from an international number. I remember it as clear as day.

‘He phoned me up and said; ‘Emyr, my name is Milton and I just want to say how thankful I am. From then on we just hit it off.

‘What makes me laugh is he always forgets his Facebook password so he’s a complete technophobe. We speak through his children on Facebook. We mostly speak about our family.’ 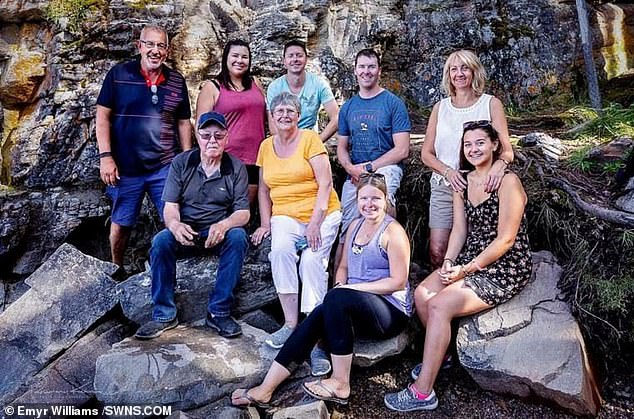 During his time in Canada, Mr Williams met with Mr Becker’s family and was taken on a trip around Alberta and the Rocky Mountains

Mr Becker said: ‘I couldn’t turn up the chance to thank the guy who gave me life! I started off by thanking him and we had a great chat. I told him I would be forever grateful and wanted to keep in touch.’

The two then added each other on Facebook and soon became good friends with weekly messages and monthly phone calls.

Then two years later Mr Becker phoned Mr Williams to ask if he and his family would be interested in flying out to Canada for a two-week holiday.

Mr Williams said: ‘He asked me during one of our phone calls. I had never been to Canada and thought it would just be great to meet each other face-to-face.’

Mr Williams flew out with his wife and teenage daughter last September 2019 to start the two-week itinerary around Alberta and the Rocky Mountains.

He said: ‘He was there at the airport with a Welsh dragon on his T-shirt and a Welsh flag. You couldn’t miss them. We have beautiful mountains here in Wales but Canada was just something else. It was an absolutely incredible trip. He paid for it all.

‘We stayed in cabins, had a party with his extended family, we drank, sat by the open fire, and toasted marshmallows.’ 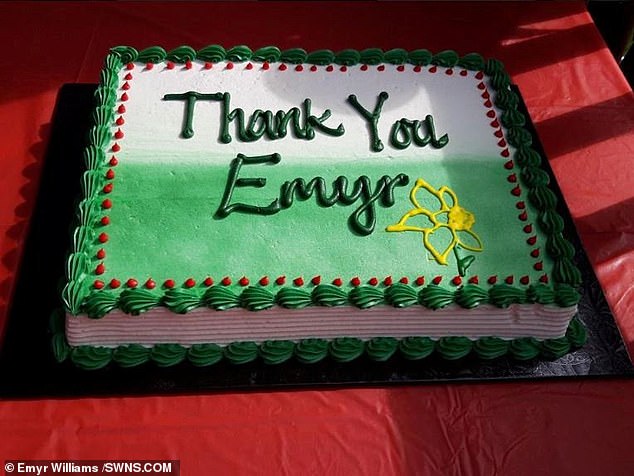 Mr Becker, who said he was ‘forever indebted’ to Mr Williams,  prepared a Thank You cake for the father from Wales

Mr Becker added: ‘One Sunday I took him to my church. People knew he was coming and the service and to my surprise Emyr got up and told the church about the successful operation. There were tears but it was just beautiful.’

Now seven years on from the transfusion, the pair say they are thankful to have one another in each other’s lives and still keep regular contact with one another, with Facebook messages, fortnightly phone calls.

Mr Williams said: ‘They’re planning on coming to Wales next year in June or July. We’ll definitely go back out there again in a few years.

‘Even though we’re thousands of miles away, we’re such great friends.’