The father of gay US skater Adam Rippon tonight launched a passionate defense of his son after Donald Trump Jr. took a swipe at the Olympic medalist.

The President’s son criticized Rippon, 28, who won a bronze last week on the skating rink in Pyeongchang, for focusing on Vice President Mike Pence, who he refused to meet when he was in Korea for the Winter Olympics’ opening ceremony.

Trump Jr. hit back at Rippon after he stated he stood by his statement that he did not want to meet the Vice President but that he also did not want to ‘distract’ from his teammates’ Olympic experience.

But Trump Jr began a Twitter war with the Olympic hero when he said: ‘“Really? Then Perhaps you shouldn’t have spent the past few weeks talking about him. I haven’t heard him mention you once???’

The father of gay US skater Adam Rippon has launched a passionate defense of his son after Donald Trump Jr. took a swipe at the Olympic medalist. Adam is pictured above with his father Rick 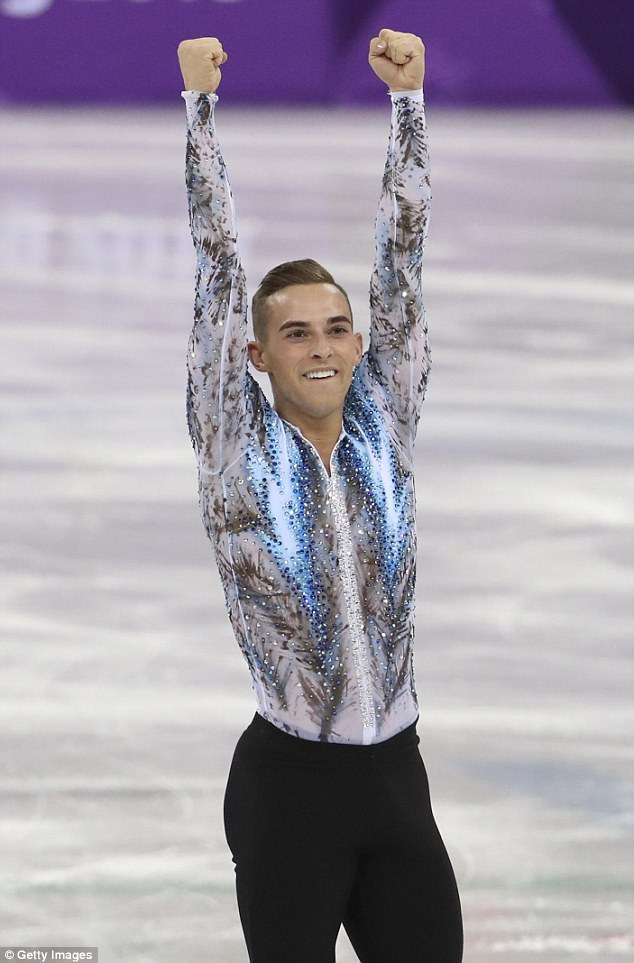 Trump Jr. hit back at Rippon after he stated he stood by his statement that he did not want to meet Pence

But Rippon’s businessman father Rick said: ‘There are people out there that may not be routing for Adam because he has been so outspoken. I get that.

‘I respect that you may not agree with him.

‘All I would ask is that you might put that aside for the moment and celebrate with us for the next two nights (when Rippon skates for two gold medals).’

Mr Rippon, of Clarks Summit, Pennsylvania, who is divorced from the skater’s mother Kelly, added: ‘Getting to the Olympics is a lifetime of work and sacrifice and nobody has worked harder than Adam.

‘Adam’s mother Kelly did an incredible job helping him to achieve his goal and it’s a blessing that she could be there to see it.

‘But there have been so many people that have helped along the way. Some people have done small things that have had large affects.

‘Adam’s grandma Peg was always there whenever we needed her, and I wish she was in a position that I could thank her.

‘My mother helped me in ways that would be impossible to express. Adam’s aunts and uncles and family friends all share in this and I hope that (they) know that. ‘

Mr Rippon said he wants to thank the skater’s siblings as well as his ex-wife ‘ for seeing that Adam was an Olympian right from the start’.

He added: ‘He would not be there if not for her.’ 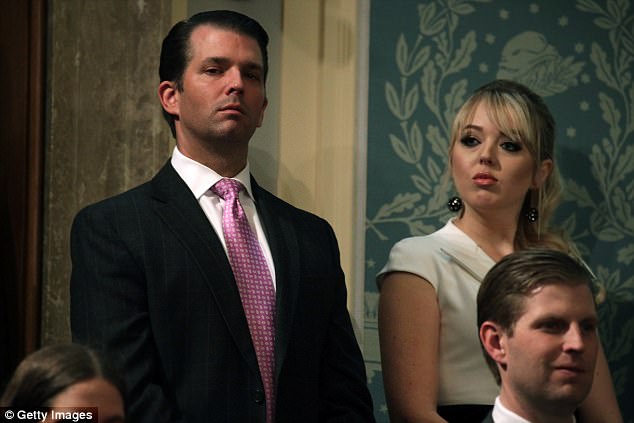 Trump Jr, pictured with sister Tiffany, started a Twitter spat with Rippon after he refused to meet Pence 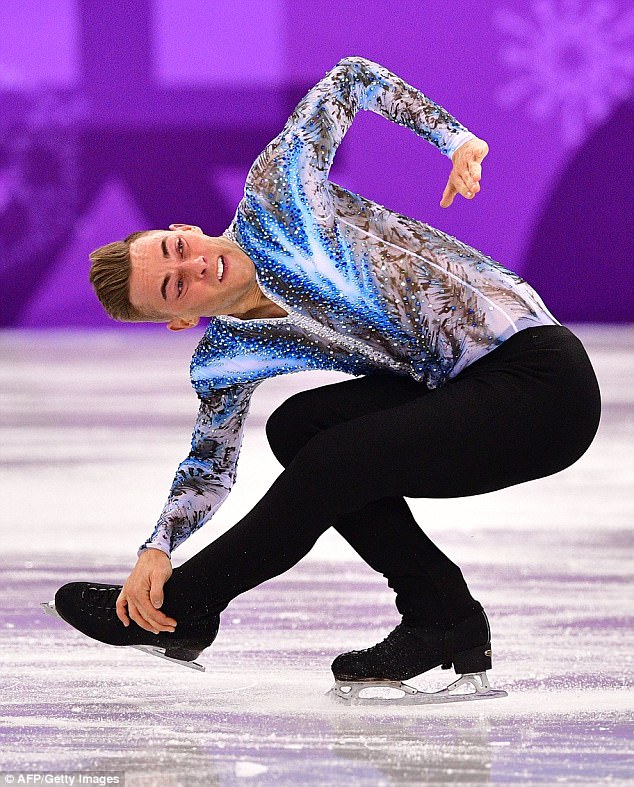 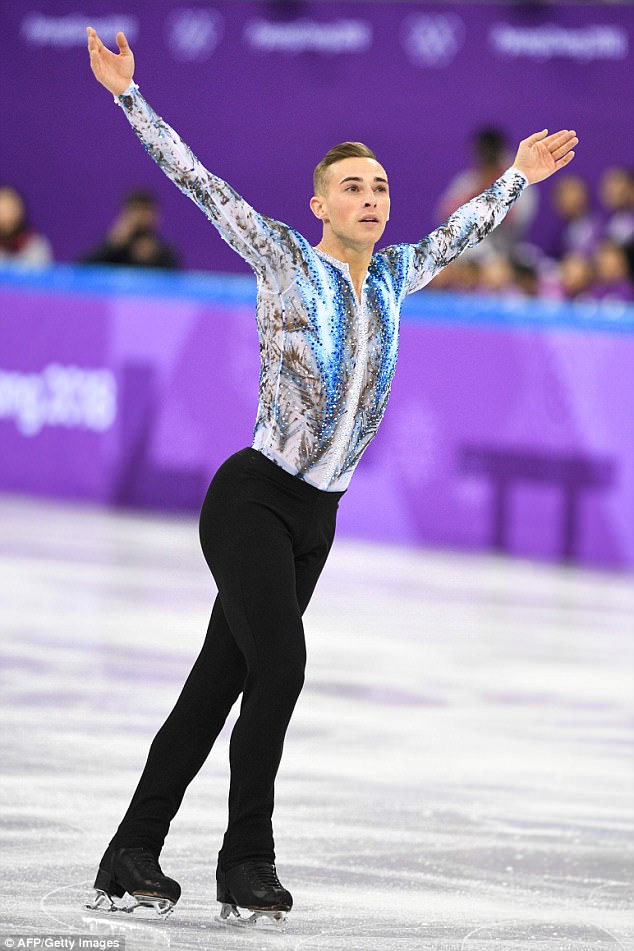 Mr Rippon said his son’s success in the team event, where the US skaters took bronze, had ‘been a blessing’

He sent this direct message to his son who was competing in the Men’s single skating event on Thursday evening: ‘You are a great representative of the United States and one of the finest athletes I have ever seen.

‘You are a wonderful young man who speaks his mind with conviction, humor and dignity. I stand behind you 100 per cent. As a father I am truly blessed. I love you with my whole heart.’

Mr Rippon said his son’s success in the team event, where the US skaters took bronze, had ‘been a blessing’.

He added: ‘It’s difficult that we could not all be in Korea, but so many people that I have not been able to talk to for years have reconnected. Many of which I have had the opportunity to have long conversations or extended messages with. The whole thing has been amazing.’

Despite Donald Jr’s claim that the Vice President had not ‘mentioned the skater once’, Mr. Pence did on February 7 on Twitter. 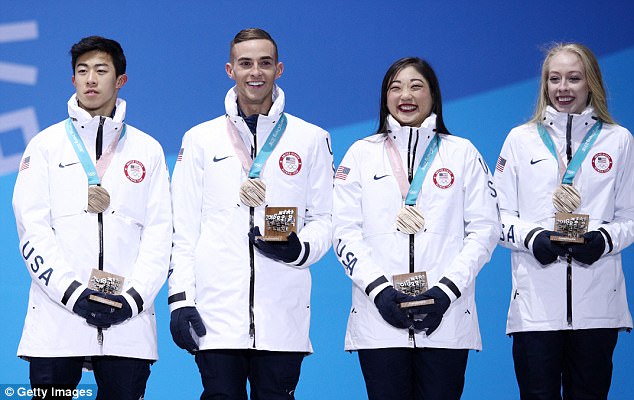 He wrote: ‘Headed to the Olympics to cheer on #TeamUSA. One reporter trying to distort 18 yr old nonstory to sow seeds of division. We won’t let that happen! #FAKENEWS.

‘Our athletes are the best in the world and we are for ALL of them!’

He then directed a message at Rippon personally quoting his Twitter handle.

Mr Pence added: ‘@Adaripp I want you to know we are FOR YOU. Don’t let fake news distract you. I am proud of you and ALL OF OUR GREAT athletes and my only hope for you and all of #TeamUSA is to bring home the gold. Go get ‘em!’

The skater’s father told DailyMail.com: ‘I want you to know how proud I am of Adam…I am incredibly proud of my son in every way. ‘Adam is a great representative of the United States and one of the finest athletes I have ever seen.

‘He is a wonderful young man who speaks his mind with conviction, humor and dignity. As a father I am truly blessed.’

In an exclusive interview with DailyMail.com, the skater said he would snub his invitation to the White House to attend the traditional party thrown by the President for Team US Olympians.

He said his decision not to go would be ‘to support my community.’

He added: ‘I have no desire to go to the White House. But I would like to do something to help my community.

‘I have kind of spoken out a lot and I’d I like to do something positive and not just stay at home.’

He is thought to be planning an alternative event to present positive messages to other homosexuals and to help combat homophobia.

He believes the hierarchy at the US administration is riddled with anti-gay beliefs and is concerned that Mr Pence is an advocate for ‘gay conversion therapy.’