A proud father desperate to film his son playing in goal at a football match was left gutted when a van blocked his view at just the wrong time.

Video footage captured the amusing scene, showing the young goalie organising his defensive wall and getting poised ready to deal with the incoming ball.

But at the exact moment the ball is kicked, the moment is lost to posterity as a bright red works van drives into shot, blocking the entire frame, and stops.

The goalkeeper’s father has found the perfect place to watch his son, warm in his car across the road. But little does he know, a van is about to spoil his fun 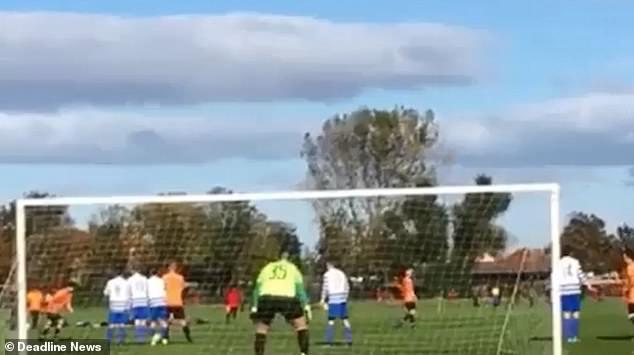 The goalkeeper gets ready to make the crucial save as his father watches on with the video camera. He’s already set up his defensive formation and he’s ready for the free kick

The video was posted to Twitter by Josh Whelan on Sunday following his brother, Ben’s, game in Birkenhead, Merseyside.

Josh added the caption: ‘Me dad recording our Ben in goal today, wait til the end’.

The video shows Josh and his dad watching Ben from their car across the road from the pitch as the players prepare for a free-kick.

Ben is in goal wearing the number 35 green shirt, as the opposing team in orange line-up the free-kick on the edge of the 18-yard box.

What appears to be a normal set-up for a set piece takes a turn for the unusual for Josh and his dad.

Amidst the shouting from the players on the pitch a faint droning noise can be heard getting louder and louder. 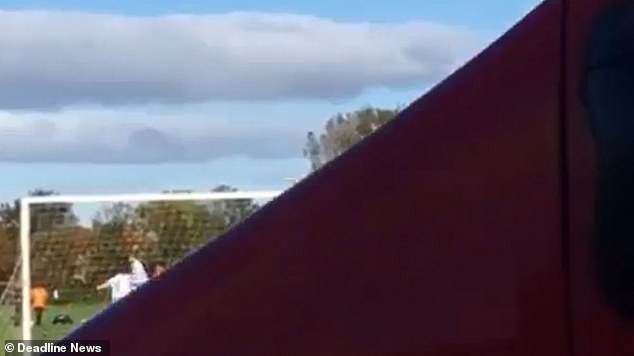 Just as the free kick is taken, a red works van looms into view and the goalkeeper’s father misses out on all the action. He can be heard in the video saying ‘f****** nice one’ 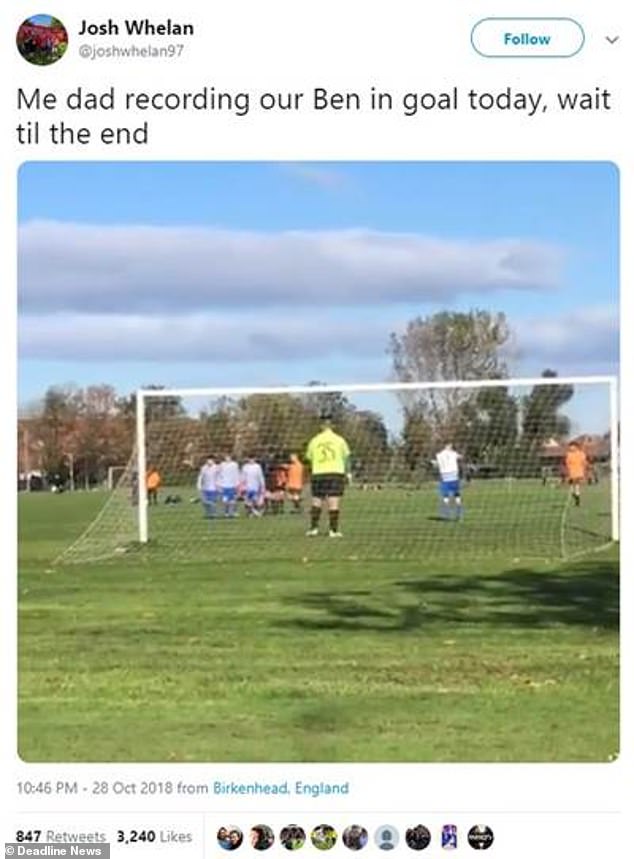 The goalkeeper’s brother uploaded his father’s footage to Twitter soon after the game. It has now amassed more than 800 re-tweets and has been watched around 750,000 times

Just as the whistle blows for the free-kick and the player in orange makes his run up a red van appears in front of Josh and his dad obscuring the view.

The video has been viewed over 775,000 times and the perfectly timed obstruction has got many people in stitches.

Blackwellgeorge said: ‘Opposition parking the bus as per usual’.

Malcolmboyle2 added: ‘Only the Brits eh! Wonderful – though I was looking forward to witnessing the great save’.

Briancanavan1 wrote: ‘And just then Josè arrived as defensive coach’.

Realfliyingpig added: ‘bet it was a worldie save as well!’.