Father is ‘saved’ after his Apple Watch spotted his irregular heartbeat

A father-of-two has praised his Apple Watch after it spotted his irregular heartbeat – a potentially fatal condition.

Chris Mint, 30, was surprised when his £349 gadget that he had for two years randomly warned him that his heartbeat was irregular.

Mr Mint, from Lincolnshire, was prompted to see his GP, who told him it was ‘unlikely’ he had the killer condition atrial fibrillation.

But a test later diagnosed him with atrial fibrillation (Afib), which can sometimes go unnoticed if it doesn’t cause symptoms.

Mr Mint said he required surgery after specialists later found two of his heart valves were leaking, which can dangerously disrupt blood flow.

Mr Mint, a project manager, told The Sun: ‘I’d owned the watch for about two years before it notified me that I had symptoms of Afib. I didn’t have a clue that it was capable of doing that until it just popped up in July.

WHAT IS ATRIAL FIBRILATION?

Atrial fibrillation is a heart condition that causes an irregular and often abnormally fast heart rate.

A normal heart rate should be regular and between 60 and 100 beats a minute when you’re resting.

In atrial fibrillation, the heart rate is irregular and can sometimes be very fast. In some cases, it can be considerably higher than 100 beats a minute.

This can cause problems including dizziness, shortness of breath and tiredness.

Atrial fibrillation is the most common heart rhythm disturbance, affecting around one million people in the UK.

It can affect adults of any age, but it’s more common in older people. It affects about seven in 100 people aged over 65.

You may be aware of noticeable heart palpitations, where your heart feels like it’s pounding, fluttering or beating irregularly, often for a few seconds or, in some cases, a few minutes.

According to Mr Mint, doctors said the watch had saved him from the possibility of a stroke or heart attack.

Atrial fibrillation is the most common heart rhythm disturbance, affecting around one million people in the UK.

It increases the risk of stroke by around four to five times, caused by a blood clot in the heart traveling to the brain.

Mr Mint’s wife Tiffany wrote to Apple CEO Tim Cook to tell him how the device had led to a shocking diagnosis.

He reportedly replied with: ‘I’m glad your husband sought treatment and is fine now. Thanks for sharing his story — it inspires us to keep pushing forward.’

Apple announced in September 2018 that it’s latest software – available to anyone with an Apple Watch Series 1 or later – would include a built in capability to take an EKG (or ECG) to check the heart rhythm.

In a hospital or clinical setting, an ECG is a crucial diagnostic tool for heart disease and arrhythmias.

The test monitors the heart’s electrical activity through electrode sensors placed on the chest.

The feature in Apple Watch has proven to be as effective at flagging heartbeat abnormalities 98 per cent  of the time.

Atrial fibrillation often goes undetected because patients’ hearts go in and out of the abnormal rhythm, therefore not picked up by a ECG.

HAVE APPLE WATCHES SAVED LIVES BEFORE?

In 2017 Bennett, from Laytonsville, Maryland, was driving home from school the night of April 6 when he was struck by another vehicle – sending him and his Jeep Patriot flying through the air.

Bennett, 22, found himself hanging from the driver’s seat by just his seat belt, but his iPhone was too far out of reach to call for help.

However, he remembered the Apple Watch included the SOS Emergency feature – he held the side button down and contacted 911 for help, who were on the scene in six minutes.

Several users have also used to heart rate monitoring capabilities of the Watch to alert them of problems. 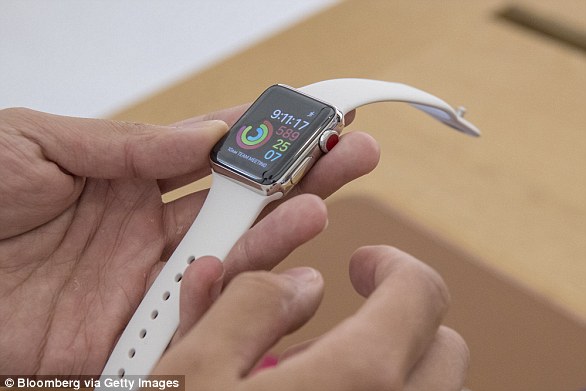 Apple Watch automatically calls the local emergency number when a user makes a call with its SOS function by holding down the side button. Emergency services said the watch saved the man’s life

A 28-year-old reporter claims the only reason he is only alive today is because of a notification on his Apple Watch.

James Green credits the gadget, which costs between $329 and $1,399 for the latest model, with spotting a life-threatening blood clot on his lungs.

His timepiece notified him of a sudden rise in his heart rate – a sign of a pulmonary embolism – which he had already suffered once before.

It prompted him to seek urgent medical help, and doctors later diagnosed him with the clot – which can kill in minutes as it stops blood from reaching the lungs.

Mr Green, from New York, tweeted: ‘Never thought a stupid lil [sic] wrist computer I bought two years ago would save my life.

‘Saw my heart rate go up, ended up being a pulmonary embolism.’ His warming post has since been retweeted 11,000 times.