Businessman Sohan Malik, 42, was jailed for more than three years on Thursday

These glossy magazine-style pictures of a father-of-five leading a lavish lifestyle with his family helped jail him over an underworld scam involving the disappearance of luxury cars.

Businessman Sohan Malik, 42, appeared to have it all as he posed in sunglasses and designer clothes at top class hotels and restaurants with his wife and daughters.

But unbeknown to loved ones Malik, from Styal, near Wilmslow, Cheshire, was in debt and was one of the masterminds of a gang that used fake details to illegally acquire high value vehicles under Hire Purchase agreements.

Malik was jailed for three years and four months on Thursday in front of his weeping daughters at Manchester Crown Court, as Judge Timothy Edwards said his children would ‘suffer’ as a ‘direct consequence of his dishonesty.’

He also set up payment details via two companies he was involved with. He then cancelled direct debits and made off with the vehicles – leaving the ‘agents’ who set up the payments to carry the can. 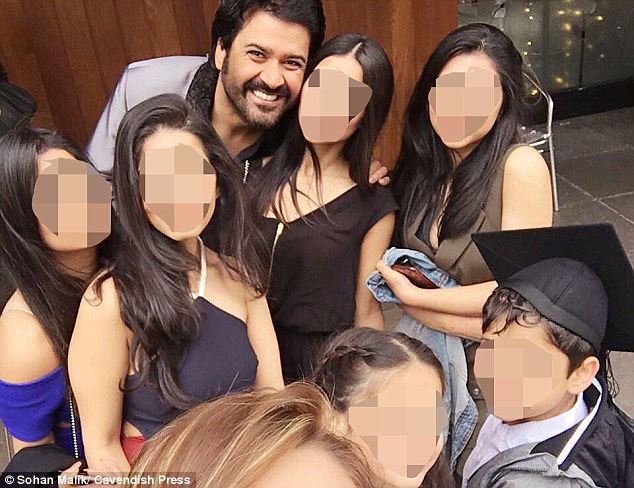 The father-of-five appeared to have it all as he posed in sunglasses and designer clothes at top class hotels and restaurants with his wife and daughters. But unbeknown to his family, he was part of a underworld scam involving the disappearance of luxury cars 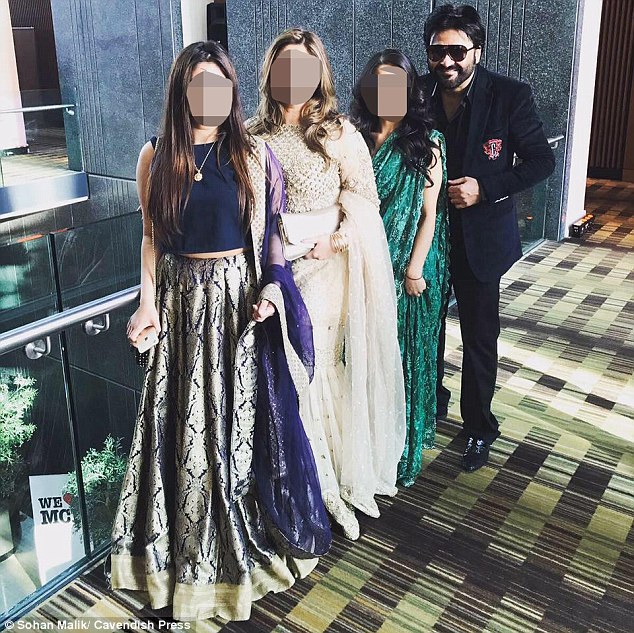 His daughters wept in court as Malik was sentenced. Judge Timothy Edwards said his children would ‘suffer’ as a ‘direct consequence of his dishonesty’

Police investigated the disappearance of six cars worth up to a total of £280,000 – but only one vehicle – a Nissan Qashqai – was recovered after being stopped whilst being driven by an unnamed man on the M60 near Manchester.

It is thought the others were sold off to finance Malik’s lifestyle. The businessman was arrested after police unravelled his shady dealings at Soha Ltd, plus another firm ISTN.

He claimed he had lost £70,000 from a 2012 business deal but officers found the images leading his ‘Life of Riley’ on Facebook. Three of the missing cars were found to have been insured under his name.

Three other people who were charged with conspiracy to steal over the scam between August 2013 and January 2014 were cleared of wrongdoing.

Passing sentence, the judge told Malik, who admitted to fraud: ‘You attended car showrooms to facilitate the obtaining of vehicles on behalf of third parties on a completely illegitimate basis.

‘It seems to me you were involving others in the transactions and placing them at risk in becoming involved in criminal investigations.

‘It seems to me that you were adopting a managerial role and you did involve others and exposed them to actual prosecution. This took place over a significant period of time. It was a matter of only time before it was ultimately discovered and revealed as it was.

‘I bear in mind the fact that this is your first conviction. You are 42, you are a family man, your children are between nine and 19. But as a direct consequence of your dishonesty they are going to be suffering.’ 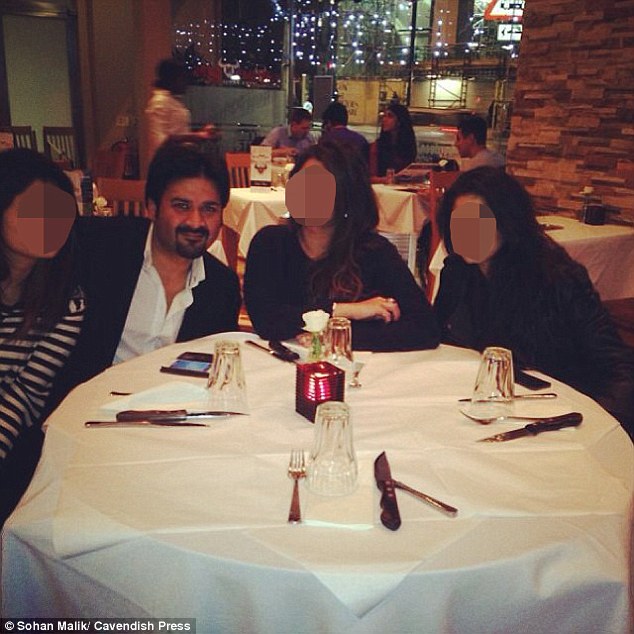 Malik, who claimed to have lost £70,000 from a 2012 business deal, was outed after officers found images leading his luxury ‘Life of Riley’ on Facebook

Earlier prosecuting, Robert Smith, said: ‘Material was obtained which appeared to show he was involved in the obtaining of multiple identities.

‘Whether he was using those identities with the knowledge of those individuals was not clear, but the documents added credence to the assertions made by the other three accused that Malik was using them as agents and that were recruited by him unknowingly.’

‘Put very simply, the defendant, using others as agents obtained a number of vehicles on hire purchase agreements and then simply cancelled the Direct Debit payments they had set up to pay for them, making off with the cars.

‘He was the guiding hand behind the use of the three agents who ended up being charged, although others were involved. That there were others higher in the chain than the defendant is probable – however, Mr Malik was clearly acting in a managerial role.’

The court heard the three agents went to dealerships and signed for cars, purportedly acting on behalf of ISTN and Soha Ltd and attended both a Nissan and an Audi dealership in Manchester to get cars under HP agreements.

Mr Smith added: ‘The defendant immediately stopped payments afterwards. The sellers would demand return of the vehicles once payments stopped but were ignored. Whilst ISTN and Soha were apparently unconnected companies, the direct debit details provided were on one occasion identical.’ 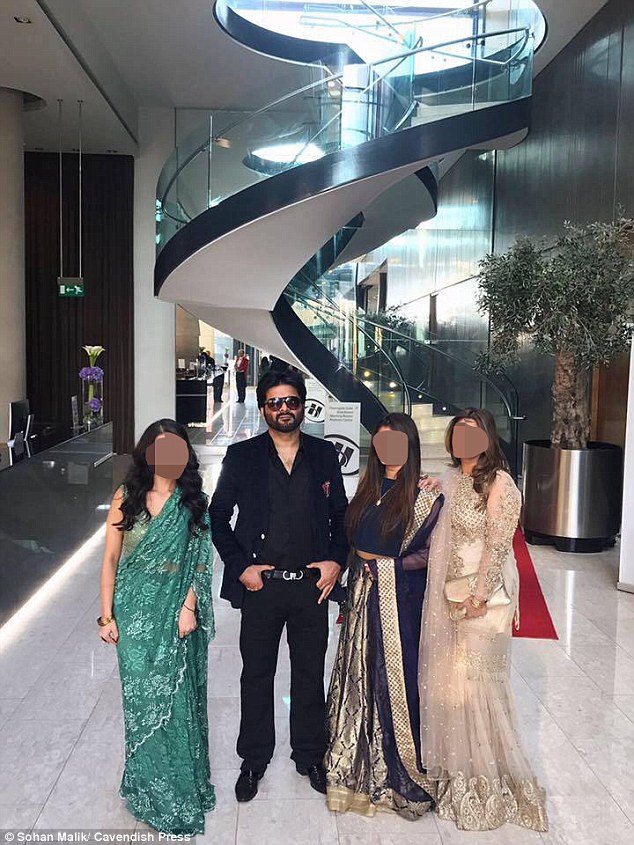 In mitigation defence lawyer Vincent Dean, said: ‘The defendant is a family man with five children and they are reliant’

One man claiming to act for ISTN made off with a £25,000 Nissan acquired on HP then managed to get a £20,000 Nissan Qashqai whilst the finance company were chasing payment for the first vehicle.

Later a woman claiming to be a director of Soha acquired a £58,000 Audi RS4 using the same bank details only for the direct debt to be cancelled. A third person acquired three Nissans within a month.

Mr Smith said: ‘That dealership had dealt with a man giving the name ‘Malik’ before, and he had set up the purchase of the vehicles, but for these vehicles it was someone giving another name who came and signed the documents for them.

‘The salesman at that garage described how Malik often appeared with a number of others at the dealership and that some of them seemed to be acting on his behalf.’

The businessman was arrested in November 2015 in Essex. He said the others cars were obtained for ‘other people’ but their businesses went bust.

Mr Smith said: ‘He said he had never signed for vehicles himself and he was never a company director, so they were not obtained on his behalf, although he said he did visit the dealerships with others.’ 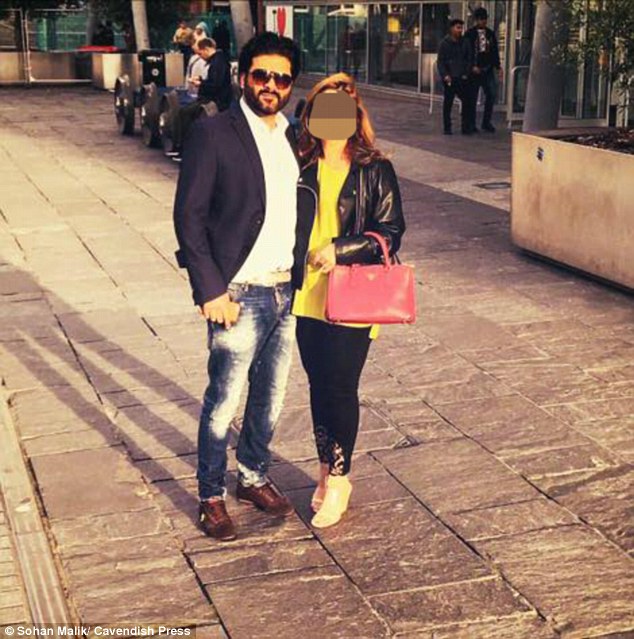 The businessman was arrested in November 2015 in Essex

He continued: ‘He described the fact that three of these cars had very quickly been insured in his name as a mistake and said that somehow people he knew had taken advantage of him and for some reason used his name to insure cars.

‘The value of the finance agreements entered into was a total of £280,603..13. Whilst not necessarily the head of the organisation, he was a manager, so his role could accurately be described as ”leading”.

‘In any event, there was significant planning and the fraud was carried out over a significant period of time.

‘There was also the involvement of others, but whilst there was no pressure exerted on others, they were, it seems, unwittingly drawn into criminality..’

In mitigation defence lawyer Vincent Dean, said: ‘The defendant is a family man with five children and they are reliant. The claim that these offences were in the context of the defendant being blamed for the loss of the £70k investment.

‘The defendant contends that he facilitated this enterprise and had a major role in the enterprise. The first car was recovered but there is no information as to recovery of the other vehicles.’