The father of a baby boy found unresponsive in a Brisbane home described as being so dirty it was unfit for children will go to trial for his murder.

His father Kozan Samual Thomas Ware is accused of murdering his son, appearing in Brisbane Magistrates Court on Tuesday, where he was committed to stand trial in the Supreme Court at a later date.

Doctors were questioned during the hearing about what caused prematurely born Adrian to die.

The court heard Ware told police his son had fallen from a single bed onto a concrete, carpeted floor about four or five days before his death.

But Andrew Kedziora, who carried out an autopsy on the little boy, said it was unlikely such a fall would have caused Adrian’s head injury, which he described as sufficient to cause his death.

‘I have been thinking about various possibilities, various scenarios, and the possibility from a bed or a short fall, is always considered when there is evidence of head injury,’ Dr Kedziora told the court.

‘It is unlikely that a short fall would have caused this degree of injury and death of a child.’

He was questioned at length by Ware’s lawyer, Deborah Holliday, if he had considered whether the boy had died from sudden infant death syndrome, and if he was wrong to rule it out as the cause. 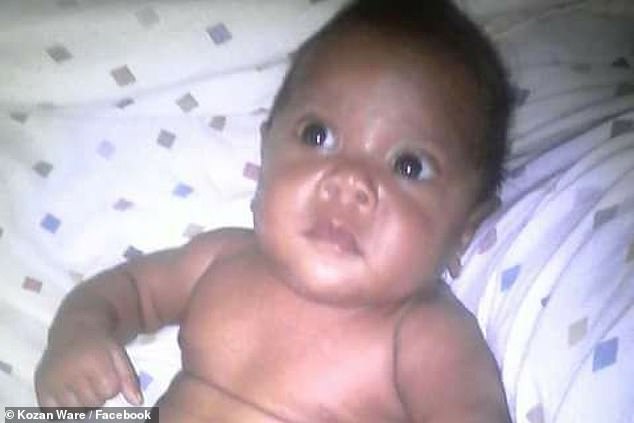 Dr Kedziora said he could not diagnose SIDS because of his other findings.

‘I don’t know who would be brave enough to diagnose SIDS in such circumstances,’ he added.

Similar questions were put to forensic pediatrician Dr Catherine Skellern, who said the boy’s death could not be classified as SIDS because of his head injury.

But she agreed with Ms Holliday that independent of that injury, an unsafe sleeping environment could have caused his death.

The court heard Adrian had a runny nose prior to his death, a rash on his neck and scalp, abrasions on his head and face, and had vomited the day before he died.

Children living in the apartment were sleeping on mattresses without bedsheets, there was clutter spread throughout the home, and Ware was sleeping on a couch.

Dr Skellern described conditions in the house as showing ‘poor hygiene unfit for any person especially children’ based on photographs she was provided.