Father-of-four showed ISIS beheading video to his own son

Gary Staples, 50, from south London, (pic in a police mug shot) posted eight videos promoting the terror group to his Google Plus account between May and September 2016

A father-of-four who showed an ISIS beheading video to his son and encouraged online followers to ‘Take a break, come to jihad’ is facing jail.

Gary Staples, 50, from south London, posted eight videos promoting the terror group to his Google Plus account between May and September 2016, the Old Bailey heard.

Another showed photos of men firing assault rifles and fighters on horseback holding Daesh flags while leading a procession of vehicles.

In January 2016, Staples was convicted of child cruelty for playing a gruesome propaganda video to his young child showing an ISIS terrorist beheading a captive.

Staples said at the time his son had mistaken the beheadings for people being buried in the sand.

He told probation and Prevent officers he had no interest in jihadi material when he was released from custody in February 2016, but was sharing pro-terrorist videos behind their backs.

Emails and text messages revealed Staples was ‘willing to fight against the pagans of the UK’ and was someone ‘committed to supporting Daesh’.

‘It’s entirely a matter for you to decide whether that conviction makes it more likely that he committed these offences.

‘He said his child mistook the beheading videos of people being buried in the sand. This was in January 2016, and these offences start in May that year.’

One of the videos featured former prime minister Mr Blair alongside superimposed flames with text warning kafirs (disbelievers) to ‘sleep with one eye open’.

Staples was convicted of seven charges of encouraging acts of terrorism and one charge of disseminating terrorist material today.

He was cleared of a further charge of publishing statements which were reckless as to the encouragement of terrorism.

Flanked by two dock officers he showed no emotion as the verdicts were announced.

Judge Anuja Dhir QC remanded Staples in custody ahead of sentence on 27 February.

‘This is a case in which the most likely outcome is an immediate custodial sentence,’ she said.

She told Staples: ‘You have been convicted by the jury of eight serious offences which would normally attract an immediate custodial sentence.

‘I am ordering a pre-sentence report but you must not assume from that I will be passing a different sentence from custody.’

Staples claimed some of the videos on his YouTube account had been uploaded by two mystery men called Bilal and Mustafa, which Mr Lloyd rebuffed as ‘nonsense’.

‘We have no messages, contacts, or text messages between anybody of those names,’ he said.

‘At the last minute in his evidence he says “I did have their numbers but its on a piece of paper somewhere in my house”.

‘The idea that they were surreptitiously putting them on his YouTube account without him knowing, with respect, it’s nonsense.’ 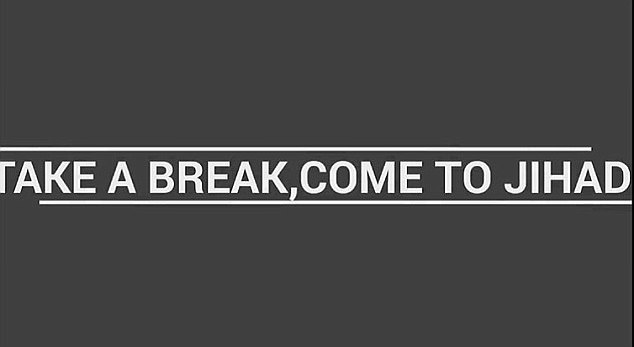 One of the videos produced by Staples included the strap line ‘take a break, come to jihad’, as shown in this undated still

Mr Lloyd said there was no evidence that Staples – who claimed in the trial to have a bad back – was conducting research into ISIS, as he claimed.

He added: ‘You may want to ask yourself, has he produced any essays or articles posted on his account? Has he engaged in any debate?

‘The material is all one way.’

Staples posted films featuring images of ISIS fighters along with slogans such as ‘Live like rabbits die like rabbits’ and ‘May the eyes of the kafir never sleep’.

One video shown to the jury titled The Struggle Continues, published July 15, 2016, showed images of Osama Bin Laden and the black flag used by ISIS.

Another showed images of Abu Bakr Al-Baghdadi, leader of Islamic State, followed by the caption ‘Made us who we are’.

Many of the videos ended with the logo of video-making software Asus Mini-Movie along with its slogan, ‘Your life made awesome’.

Staples was arrested on November 22, 2016 following an investigation by the Met’s counter terror unit.

Staples’ Google Plus account, in the name Baqqiyah Wa Tatamaddad, which translates as ‘remaining and expanding’, had 1,180 followers when police viewed it in August 2016, while his YouTube account had 102 videos and 67 subscribers.

The court heard one of Staples’ videos contained the logo of Al Hayat, a media label or outlet through which Islamic State had released a number of propaganda videos.

Staples, of South Norwood, south-east London, denied but was convicted of seven charges of publishing statements which were reckless as to the encouragement of terrorism and one count of circulating a terrorist publication.

Sue Hemming from the CPS said: ‘Gary Staples created and published propaganda videos glorifying violent jihad but falsely claimed that he was not an extremist.

‘When the prosecution presented overwhelming evidence that they were made on his electronic devices he invented a story which the jury clearly saw through and concluded that his intention was to encourage those who viewed them to prepare or commit terrorist acts.’