Father of girl, 7, who died in US custody ‘may not have understood the forms used by Border Patrol’

Seven-year-old Guatemalan girl Jakelin Caal who died in the custody of U.S. Customs and Border Protection

Lawyers for the father of a seven-year-old girl who died in the custody of US Customs and Border Patrol say he did not understand when he was asked in Spanish is his daughter was in good health and answered yes because his native tongue is Mayan.

Jakelin Caal died on December 8 in a hospital in El Paso, Texas, in the early hours of the morning. She was detained along with her father Nery at 9.15pm on December 6th as they crossed into the US in New Mexico illegally.

At 10pm that night, Nery was questioned about their health and, according to Customs and Border Patrol, told agents that neither he nor his daughter had health problems.

He was questioned in Spanish and his answers were translated to English and marked onto a Form I-779.

But in light of the fact that Spanish was not, as they claimed, his first language, it remains unclear if Nery knew what he was saying when he told the agents that his daughter was healthy.

It also remains unclear what he would have told them had he understood the questions fully.

‘Jakelin and her father speak Q’eqchi’ and Spanish is their second language. Neither of them speaks English. Yet, CBP is relying on forms signed by her father which are in the English language.

‘It is unacceptable for any government agency to have persons in custody sign documents in a language that they clearly do not understand,’ lawyers Enrique Moreno,  Elena Esparza and Lynn Coyle said in a joint statement.

He also fought the government’s initial claim that Jakelin had not eaten or drank water for ‘days’ before she died.

‘Prior to going into CBP custody and contrary to the report that Jakelin ‘had not eaten or had any water for several days,’ Jakelin had not been crossing the desert for days.

‘Jakelin’s father took care of Jakelin – made sure she was fed and had sufficient water.  She and her father sought asylum from border patrol as soon as they crossed the border.

‘She had not suffered from a lack of water or food prior to approaching the border,’ the lawyers said.

The child’s cause of death has not yet been determined and no information about her autopsy has been released.

Last week, CBP officials spoke on a conference call along with officials from the Department of Homeland Security where they gave reasons including brain swelling, liver failure, septic shock and dehydration for her death.

The officials repeatedly refused to go on the record with their claims. 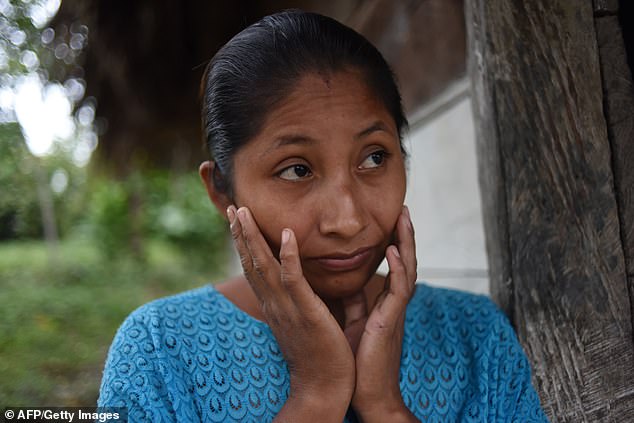 Speaking through tears in a Mayan dialect, Jakelin’s mother Claudia Maquin said: ‘Every time they ask me what happened to the girl, it hurts me again.’ 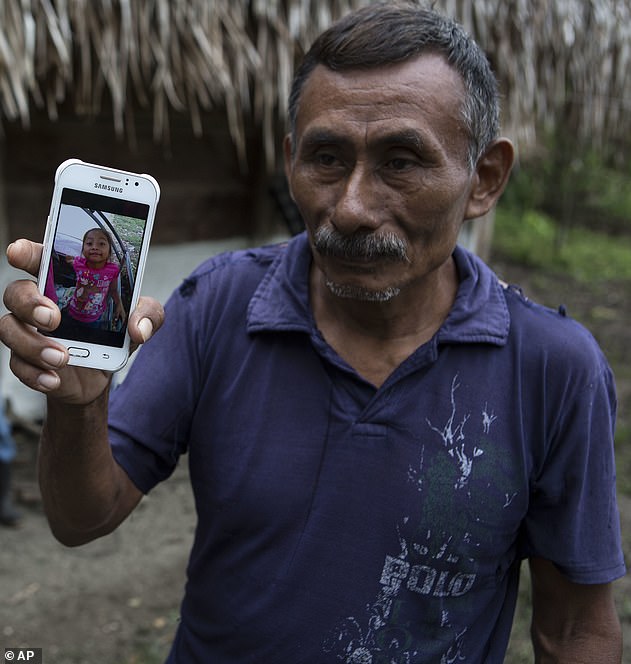 All ICE agents are required to speak Spanish, and they receive formal Spanish training. Reading forms in Spanish is often enough to pose basic questions.

But some other Spanish-speaking migrants reported signing paperwork that they later said they did not understand.

Scores of immigrant parents who were separated from their children after crossing the border in the spring said they signed forms agreeing to be deported with the understanding that their kids would be returning with them, only to find themselves deported without them. Many had to wait months before being reunited with them in their homelands.

Jakelin and her father were part of a group of 163 migrants arrested Dec. 6 near a border crossing in New Mexico.

Hours later, they were placed on a bus to the nearest Border Patrol station, but Jakelin began vomiting and eventually stopped breathing.

Border Patrol officials on Friday said agents did everything they could to save the girl but that she had not had food or water for days.

An initial screening showed no evidence of health problems, they said, and her father spoke to them in Spanish and signed a form indicating she was in good health. 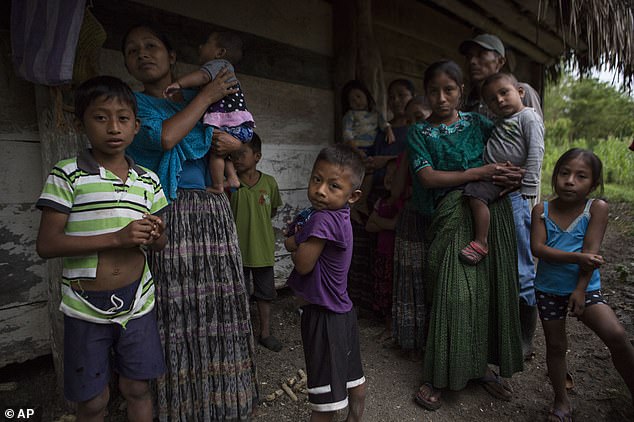 Jakelin’s family (pictured) is now mourning her death from 2,000 miles away in the remote Mayan Q’eqchi’ community of Raxruhá, Guatemala 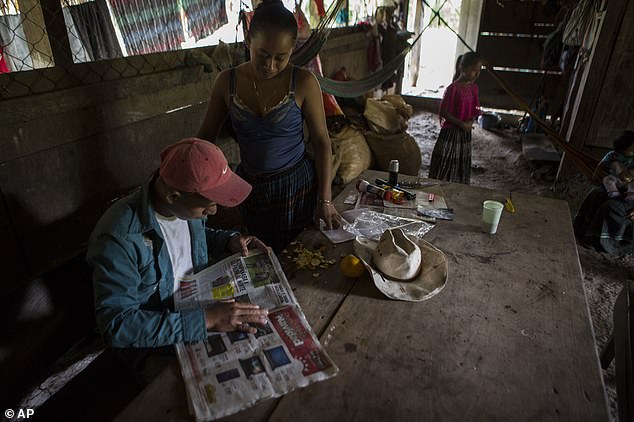 Jakelin’s cousin Carlos Rigoberto Caal Cux, 23, is seen reading a newspaper article about her death on Saturday in Raxruha

Jakelin’s family is asking for an ‘objective and thorough’ investigation to determine whether officials met standards for taking children into custody.

Border Patrol officials did not immediately respond to the family lawyers’ statement. The father, who is staying at a shelter in El Paso, Texas, has asked for privacy.

Authorities are conducting an autopsy to determine the cause of death. Results are expected in about a week, said Tekandi Paniagua, the Guatemalan consul in Del Rio, Texas.

Paniagua, who spoke with Jakelin’s father, said the two had walked with the other migrants for about 90 minutes before crossing and Caal told him he had no complaints about how agents treated him and his daughter.

Caal speaks broken Spanish. In his impoverished village in Guatemala, Spanish is needed only occasionally, such as when the community deals with schools and health care or for work, Paniagua said. 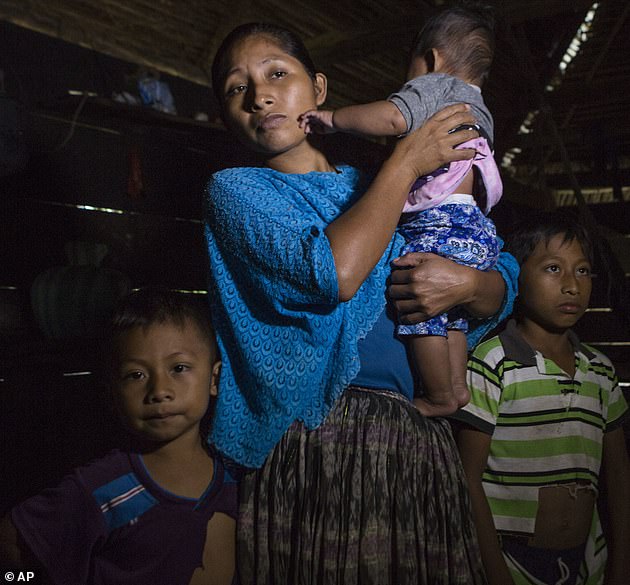 Jakelin was the second-oldest child in the Caal Maquin family. Her siblings Elvis, Angela and Abdel are seen above left to right 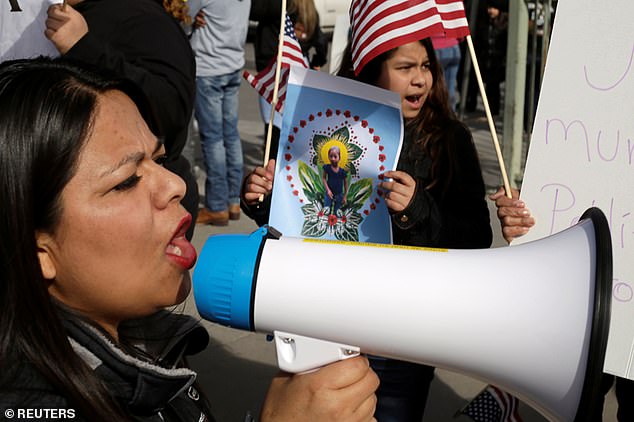 More than two dozen languages are spoken in Guatemala, and the consulate tries to send interpreters as soon as possible to help detained migrants, Paniagua said. But sometimes by the time they get there, the migrants have already signed forms.

Caal asked the Guatemalan consulate in Texas, which had reached out to him, if he could see his daughter one last time before her body was sent back to her homeland.

That request prompted special arrangements at a private funeral home on Friday, when he said goodbye to Jakelin.

The consulate asked him if he wanted an interpreter who could explain everything, including the repatriation of her body, in Q’eqchi.′

He said he did. After listening to the interpreter, Paniagua said, Caal thanked the consulate and said ‘he felt more comfortable in his own language.’ 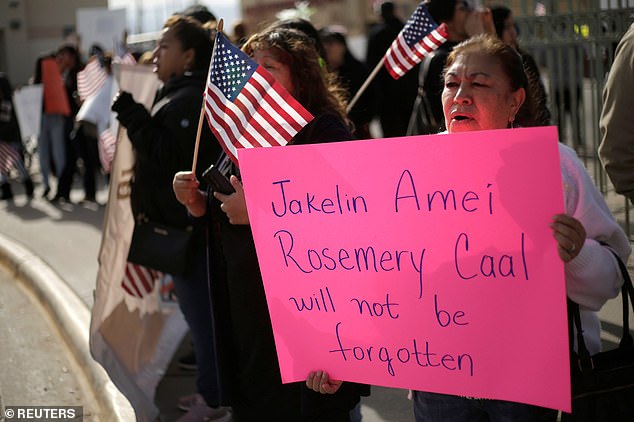 A woman holds a sign with the words: Jakelin Amei Rosemery Caal will not be forgotten’ during Saturday’s protests 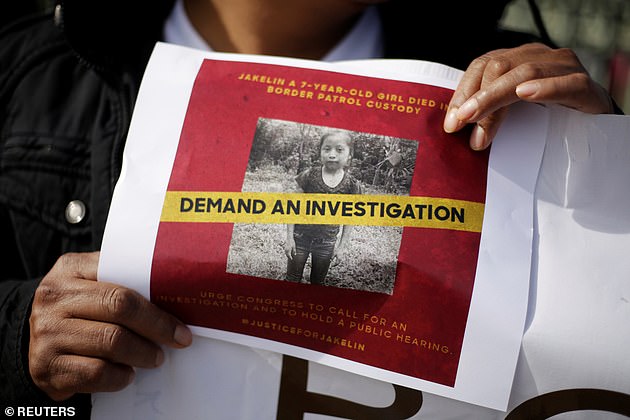