As many newlyweds have celebrated their first dance with renditions of the lift from Dirty Dancing, this father and daughter made it their own with an incredible dance mash-up.

The pair start off in traditional style dancing to Daydream Believer by The Monkees only to don sunglasses and dance to Madness, Saturday Night Fever and even Beyoncé.

But it turns out the father, Ian Richards, 55, stole the show as guests chanted his name and wanted an encore at the wedding in Nottingham.

Bride, Amie Milner, 29, is a dance teacher and guests expected her to do something dance related with new husband, Liam.

But no one predicted she would have a traditional romantic dance with Liam and pull out the moves with her father.

The pair had eight to ten half-hour lessons choreographing the routine at Amie’s dance school, The L.A Performing Arts Academy in Doncaster. 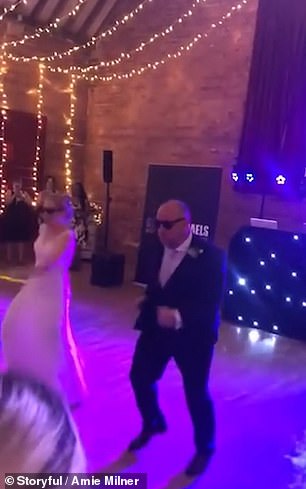 The father and daughter from Doncaster dance to Saturday Night Fever (left) and Madness, One Step Beyond (right)

Mr Richards, a retired police officer, told BBC Radio Sheffield: ‘It was my daughter’s idea as soon as she decided to get married. She said she wanted to do a more traditional dance with Liam, her husband and would I be up for a bit of a laugh.

‘The family knew something was off because i was disappearing for private dance lessons but they had no idea what the dance was or what we were gonna do.

‘I’ve got three things to do that day, walk her down the aisle, deliver a speech and do the dance and I’ve got to say the dance was what I was most worried about.’ 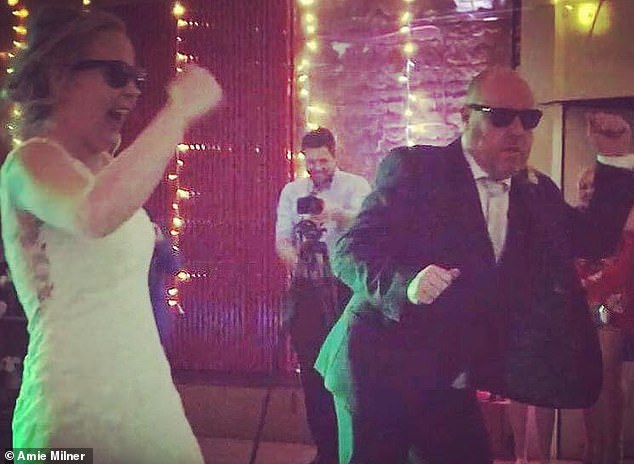 Mrs Milner, who is now on her honeymoon in Cyprus, told MailOnline: ‘I think everyone expected me to do something dance orientated with my husband Liam, but we just wanted to have a nice romantic dance! So we thought would surprise everyone with a father and daughter dance mash up.’

‘I created the mashup at the start of this year, and after my dad retired in May and he started coming for weekly private lessons.’

‘The songs we picked, the monkeys, queen, beegees are all songs that remind me of my father, and the Beyoncé track was just for a laugh! And the last song turn down for what, was mainly for me, I’m a street dancer.’

‘It went down a storm and by the end of the Dance everyone was chanting my dads name, we even did an encore at the end of the night. It was brilliant.’ 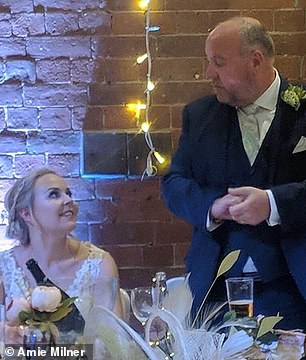 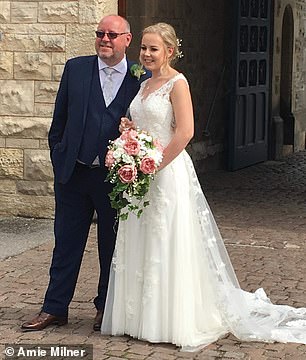