Father-of-three, 47, slams justice system for ‘pathetic’ £70 fine handed to teenage yob who stabbed him on his own doorstep as his family cowered inside

A father-of-three has slammed the justice system for the ‘pathetic’ £70 fine which was handed to a teenager who stabbed him on his own doorstep.

Andy Holding, 47, was knifed in the arm and punched in the face by the juvenile after he tried to break up a clash outside his home between two teenagers.

During the attack Mr Holding’s wife and young daughters aged 10 and 11 were inside the property in the early hours of December 21, 2017.

After the stabbing Mr Holding required an operation on his right forearm as well as several stitches, time off work and counselling.

Andy Holding, 47, was knifed in the arm and punched in the face by the juvenile after he tried to break up a clash outside his home in Oxon between two teenagers

Mr Holding, from Wantage in Oxon, said the fine was ‘absolutely pathetic’ for the gravity of the crime, after the judge sentenced the youths, then 15 and 16.

He said: ‘My guess is you’d probably be punished and fined more for driving in a bus lane. It makes a mockery of our criminal justice system.’

Mr Holding said the attack followed a night of threats and anti-social behaviour outside his home in Wantage, Swindon, Wiltshire, in which one of the youths had sent threatening messages to his 15-year-old son.

These threats included threatening to kill Mr Holding, as well as spitting at his son and kicking cars and the door of the family home.

In October this year, the two youths were sentenced at Oxford Magistrates’ Court, and forced to pay £220 between them.

The boy who stabbed Mr Holding was fined just £70, with a £50 compensation cost – and he said that, a year later, the boy still has yet to pay any of his £50 compensation.

Mr Holding said: ‘Personally I believe the sentence is absolutely pathetic for the crimes which were committed, especially the knife crime offence of stabbing and having a knife in a public place. 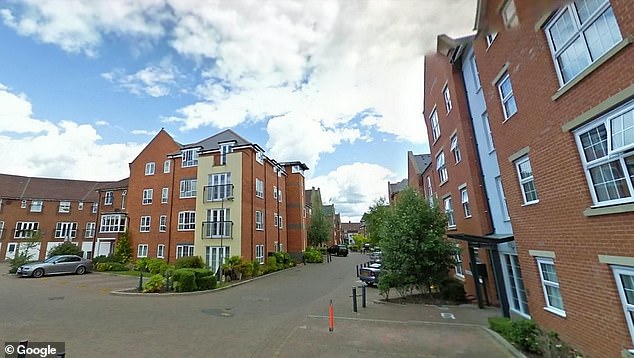 During the attack Mr Holding’s wife and young daughters aged 10 and 11 were inside the property (pictured) in the early hours of December 21, 2017

‘The only thing I can be grateful for is that he was found guilty in court of stabbing me and that I have partially recovered from my stab wound and psychological injury.

‘But I’m very disappointed in the British criminal justice system, and especially the judge who sentenced the youth who committed very serious crimes.’

The boy who stabbed Mr Holding was sentenced on five counts, including common assault, assaulting a constable in the execution of their duty, criminal damage to property, affray, and possessing an offensive weapon in a public place.

He was also sentenced for inflicting grievous bodily harm without intent, which he denied.

Legal experts say a youth court can impose a maximum of 24 months detention and training in such cases.

The boy was also given a two-year restraining order and youth rehabilitation order.

The conditions of his order are to ‘participate in reparation’ for 10 days, be monitored by an electronic device and told to participate in a ‘weapon intervention tool kit’.

A standard penalty charge notices for driving in a bus lane are £90 – £20 more than the fine the youth who stabbed Mr Holding was told to pay.

Russell Hayes, a spokesman for the judiciary office which represents judges, said the organisation would not comment on individual cases.

But he added: ‘Every case will have different circumstances and the judges explain these in court.

‘They sentence according to the individual facts of each case and within the relevant sentencing guidelines.’

He said that victims unhappy with sentencing can complain to the Attorney General.