Father-of-three, 59, is gored to death after tripping over in front of bull at Spanish fiesta

Father-of-three, 59, is gored to death after tripping over in front of bull at Spanish fiesta after another man was also hurt

Shocking video has captured the final moments of a father who was gored to death during a running of the bulls event in Spain.

The man, named locally as Vicente Asensio Martinez, 59, was killed around 8.45am on Saturday in the town of Chiva, around 20 miles west of Valencia.

Video shows how Martinez got cornered by the bull in a doorway with a group of other men before trying to run away.

As he fled he tripped and fell before the bull charged a second time, impaling him on its horns and dragging him along the street.

This is the moment a 59-year-old man, named locally as Vicente Asensio Martinez, was gored to death during a running of the bulls event in the town of Chiva, Spain

Local media reports Martinez was gored twice in the abdomen and once in the leg and died on the way to hospital.

A second man was also gored while standing in the same doorway where Martinez got trapped, but survived.

He was treated in hospital and released the same day. 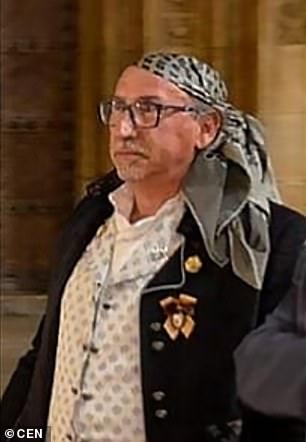 Mr Martinez, a father-of-three, was on holiday at the event when he was fatally gored twice in the abdomen and once in the leg

The incident was filmed during the ‘Torico de la Cuerda’ running of the bulls event which continues until 19th August.

One message said: ‘We will always remember you Vicente. For anyone who knew you, it was a privilege to share and enjoy your company.’

Commission President Juanjo Farinas said that the victim has three daughters who live in Valencia and he was visiting Chiva on holiday.

Despite the tragedy, the event was not cancelled and the city council announced two minutes of silence to honour Asensio Martinez.

The council added that the event ‘had all the security measures and insurance required by law’.

It is unclear what happened to the bull after the incident but the event’s website says the animals are returned to their breeders after the festival. 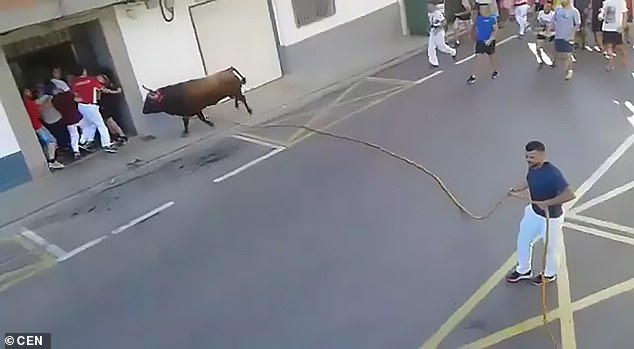 Video shows how Mr Martinez became trapped in a doorway with a group of other men as trhe bull charged, before trying to flee 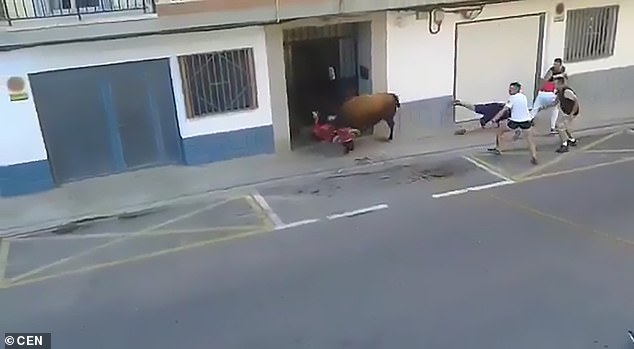 One man was gored in the back – but survived – as Mr Martinez tripped and fell (right). The bull then charged at him a second time as he was on the ground, fatally goring him