A young father-of-three was so heartbroken by the breakup of his family that he snuck out of a hospital and took his own life.

Brieze Montiero, 31, died alone is his flat in Perth on Monday having not seen his sons, aged 11 and 12, and nine-year-old daughter since Christmas.

‘He felt like he had lost everything and was living a nightmare that was never going to end,’ his grieving mother Beverley Bell told Daily Mail Australia.

Brieze Montiero, 31, was so heartbroken by the breakup of his family that he snuck out of a hospital and took his own life 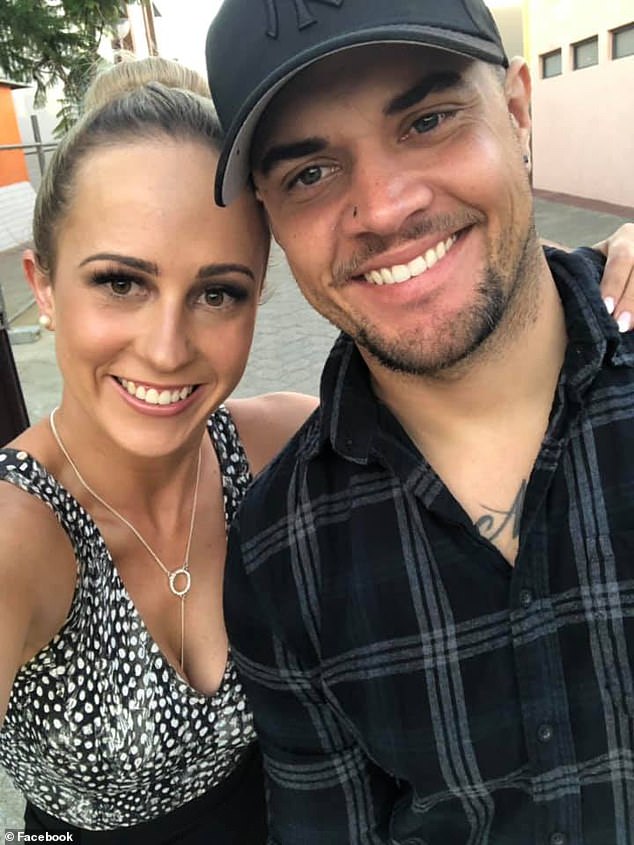 Mr Montiero even sent a haunting series of late-night messages to his new girlfriend, Sarah Smith, two weeks before his death, giving her instructions for his funeral and begging her not to tell anyone he planned to kill himself.

His death highlights the heightened risk of suicide among men following relationship breakdowns.

Preliminary findings from new research by Griffith University indicate more than 60 per cent of male suicides can be traced back to breakups.

Ms Bell said her son’s marriage ended a year ago when he returned home from his job on an oil rig.

‘He worked extra to pay for a new pool for his kids. He got back on New Year’s Day and she had his bags packed for him at the door,’ she said.

‘It crushed him. He tried to work on it, but not even a month later he tried to kill himself.’ 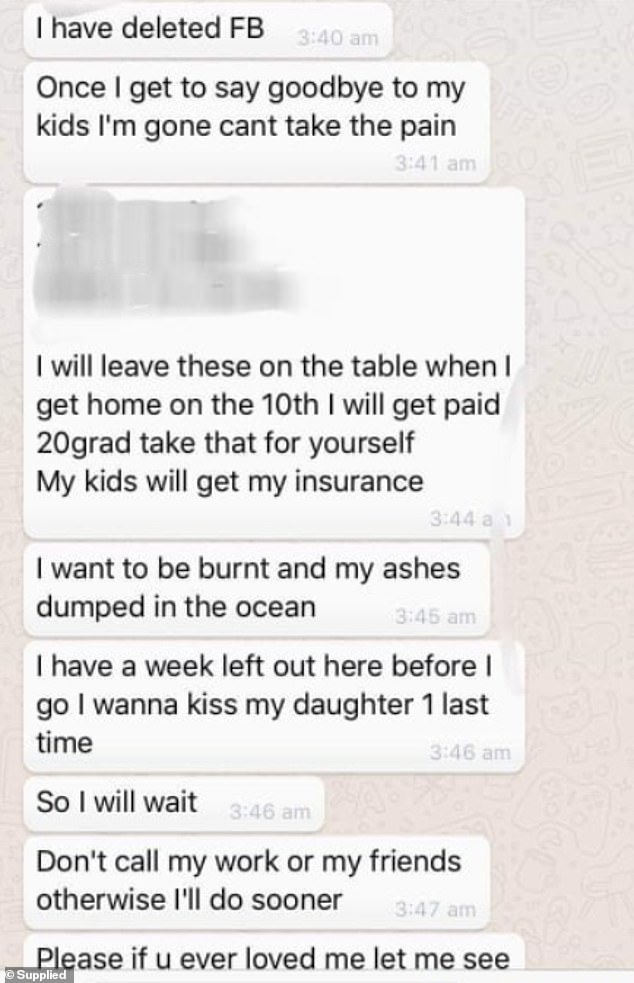 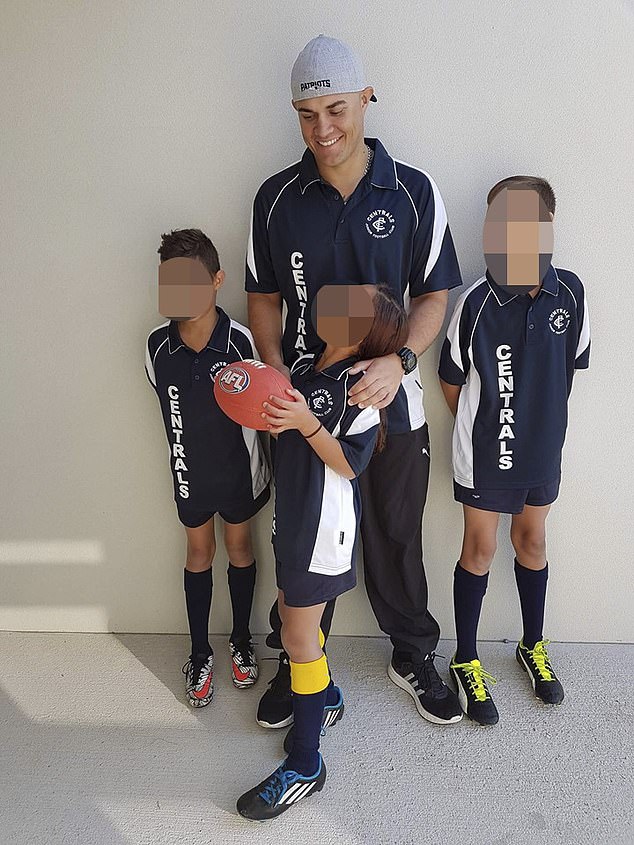 Mr Montiero survived that suicide attempt after days in the ICU, and after months of depression finally moved on and found love with Ms Smith in mid-2018 and began to enjoy life once again.

However, he became despondent about how little time he was able to spend with his children as a result of his marriage breaking down.

‘He spiralled quickly from there,’ Ms Bell said.

In January when he was working away he emailed his ex-wife to begin divorce proceedings as he had just signed a lease to move in with Ms Smith.

On January 28 he sent a series of alarming messages to Ms Smith declaring that he was going to kill himself after he returned and saw his children one last time.

But he would never see his children again. 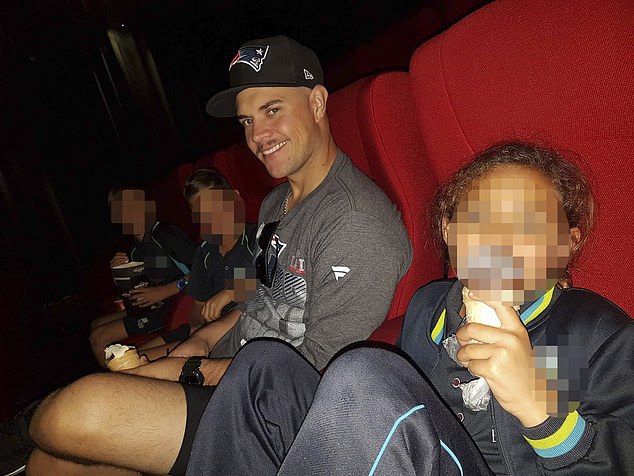 Mr Montiero begged Ms Smith not to tell anyone he planned to kill himself until he saw his children one last time, but he never got the chance 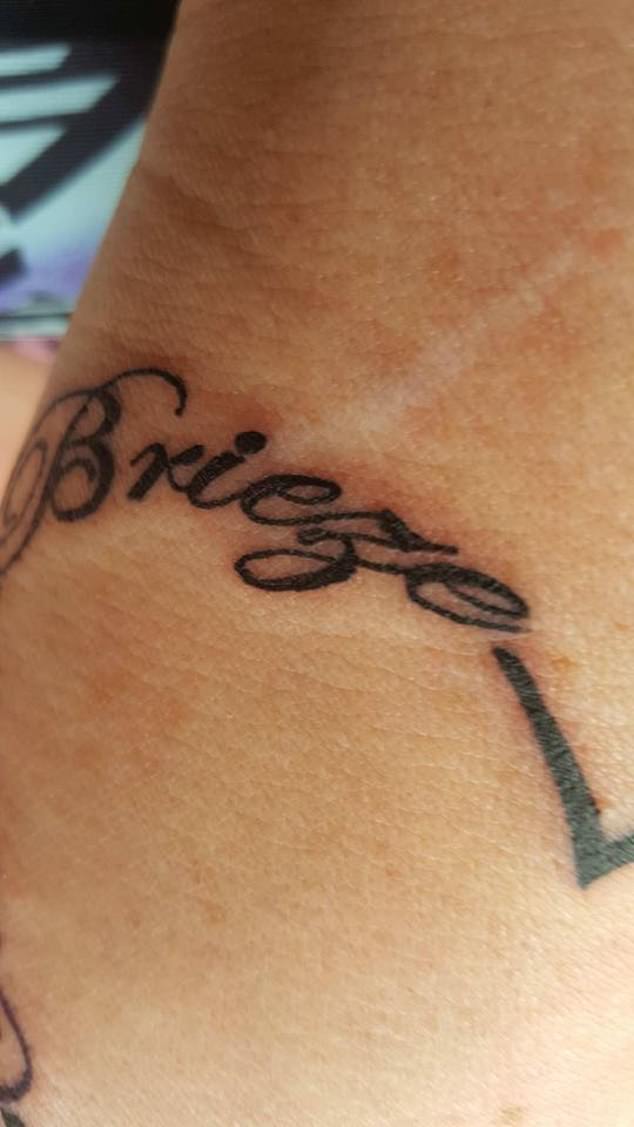 A tattoo of her son’s name Ms Bell has on her wrist, which will act as a reminder of his life to her

After Ms Smith sent Ms Bell the messages, the desperate mother spoke of her pain and fears for her son on social media.

‘Parents of adult children who do have a suicidal child, my heart bleeds for you. The pain of waiting for the phone call is unbearable,’ she wrote.

Mr Montiero got home on February 6 and on the morning of the day he died sent a series of messages to Ms Smith as if to say goodbye.

Ms Smith got increasingly worried and told him she would tell his parents what he was saying if he didn’t stop and reassure her he wouldn’t do anything stupid.

But Mr Montiero’s last messages were even darker: ‘I won’t be sleeping tonight, not in this world. Sorry for ruining your life.’

Ms Smith contacted her boyfriend’s parents and asked for help, after which Ms Bell called triple-0 and emergency services found him and took him to hospital about 10am.

Ms Bell, living 500km away in rural WA, pleaded with police and hospital staff to keep an eye on him, concerned he would sneak away and harm himself. 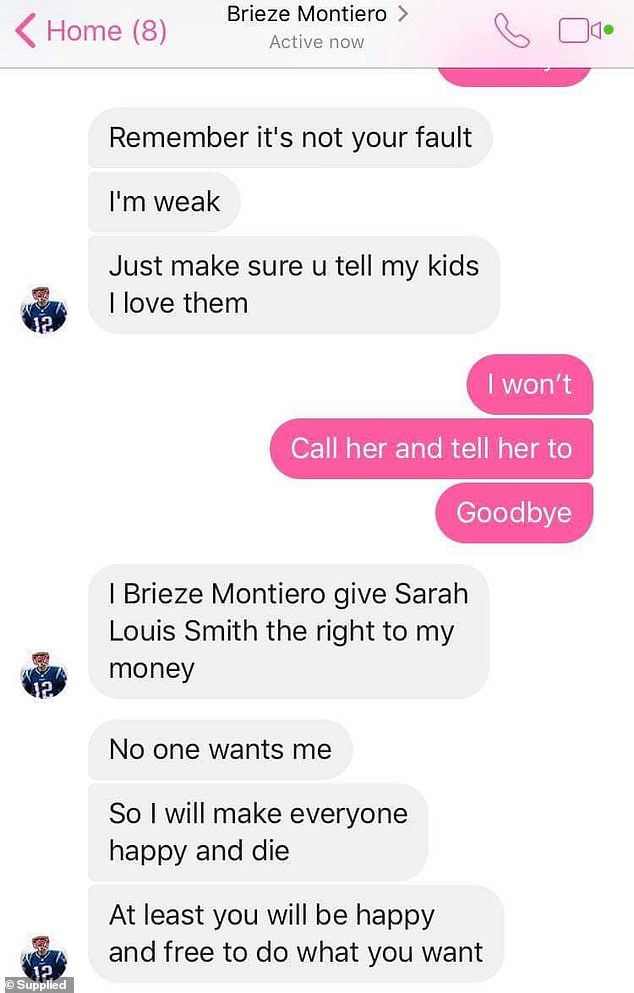 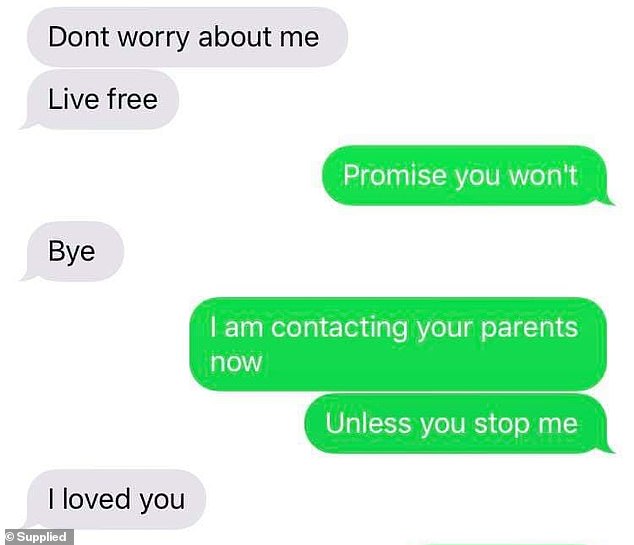 A psychiatrist saw him about 5pm and agreed he needed to be hospitalised, but there were no beds available in the psychiatric ward that day so he would have to wait in triage overnight.

‘The police took his restraints off and left and he went outside for a cigarette, but then he came back, took his clothes, and left,’ she said.

‘He called his kids to say goodbye and no one ever heard from him again.’

After a frantic search, police knocked down the door to his flat in an effort to save him – but they were too late.

Ms Bell on Wednesday drove six hours to Perth to collect her son’s body and organise his funeral, with his sister arriving from the U.S. on Friday.

‘It don’t think it’s properly hit me yet that he’s gone, and won’t until I see his body. I still feel like he’s just away at work and will come back,’ she said. 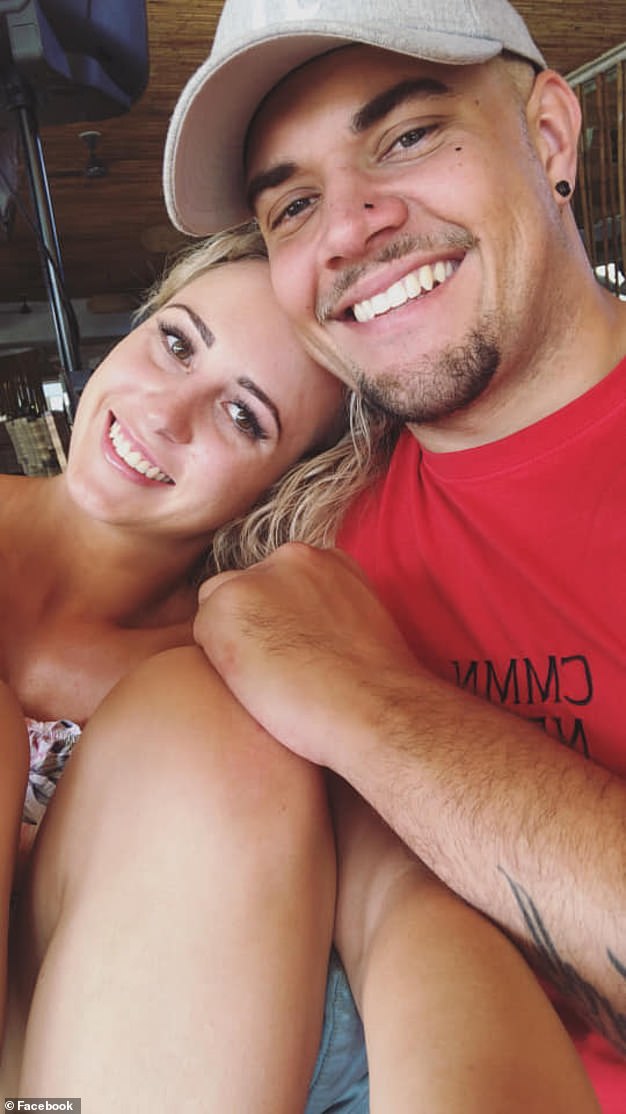 Ms Smith (left) sent his mother the messages, who arranged for emergency services to intervene 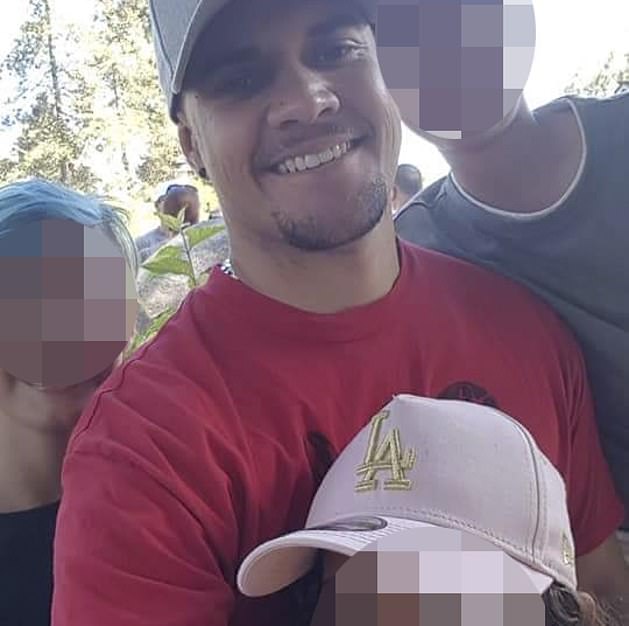 After a frantic search, sparked by Ms Smith and Ms Bell, Mr Montiero was found dead

Ms Bell earlier shared a touching tribute to her son the day after his death, apologising for not being able to mend his broken heart.

‘You were my one and only son. You were precious, loved, adored by so many people. I’m so sorry your kids now have to deal with this pain,’ she wrote.

‘Your Dad, your sister, myself and your beautiful children will miss your voice, your laughter, your trying to sing, we will remember your smile.

‘I am sorry we couldn’t fix the damage that was done. Sleep my boychild, rest, you gave your all, no one will ever say your heart was not full of love, you will be my first thought in the morning and last thought at night.’

Ms Smith also wrote a heartfelt tribute mourning the life together they never got to have, but was too distraught to speak to Daily Mail Australia other than to confirm Ms Bell’s version of events.

‘Words can not even begin to explain how heartbroken I am. You quickly became my whole world and the love of my life,’ she wrote.

‘You made me feel so happy and I will forever be grateful for all of the amazing memories we got to share together. 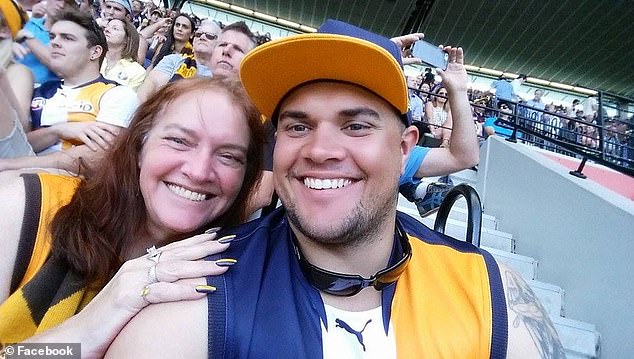 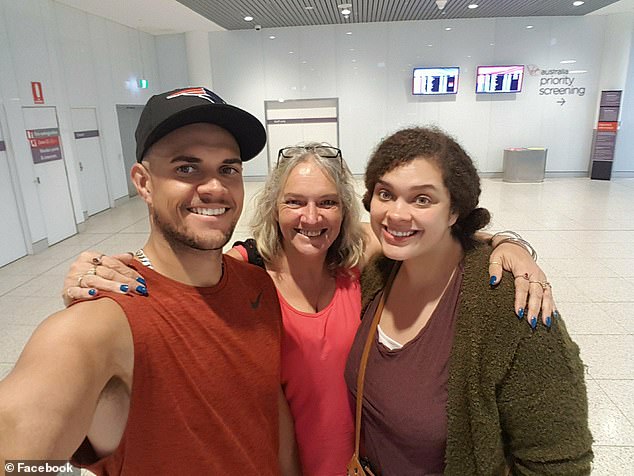 Mr Montiero with his mother and sister, who is flying in from the U.S. on Friday ahead of his funeral

‘You never failed to put a smile on my face. I will forever love you Brieze and will hold you in my heart for the rest of my life.

‘Although we weren’t together for that long, it had been the best 6 months of my life and I will forever be thankful that you showed me I could love again.

‘We had such big plans for the future and I was so excited to show you what true love felt like and to start a family together so that you could get the life you always deserved.

‘I wish this was all just a bad dream. Rest In Peace Brieze, I hope that one day I will get to see you again.’

Pete Nicholls, chief executive of Parents Beyond Breakup, said men separating from their partners were among the most at risk of suicide.

‘Feelings of isolation and hopelessness are two of the biggest drivers of suicide, and you often get both at once in a breakup,’ he said.

‘They’ve lost their partner and home at once and usually aren’t able to see their children very much.’ 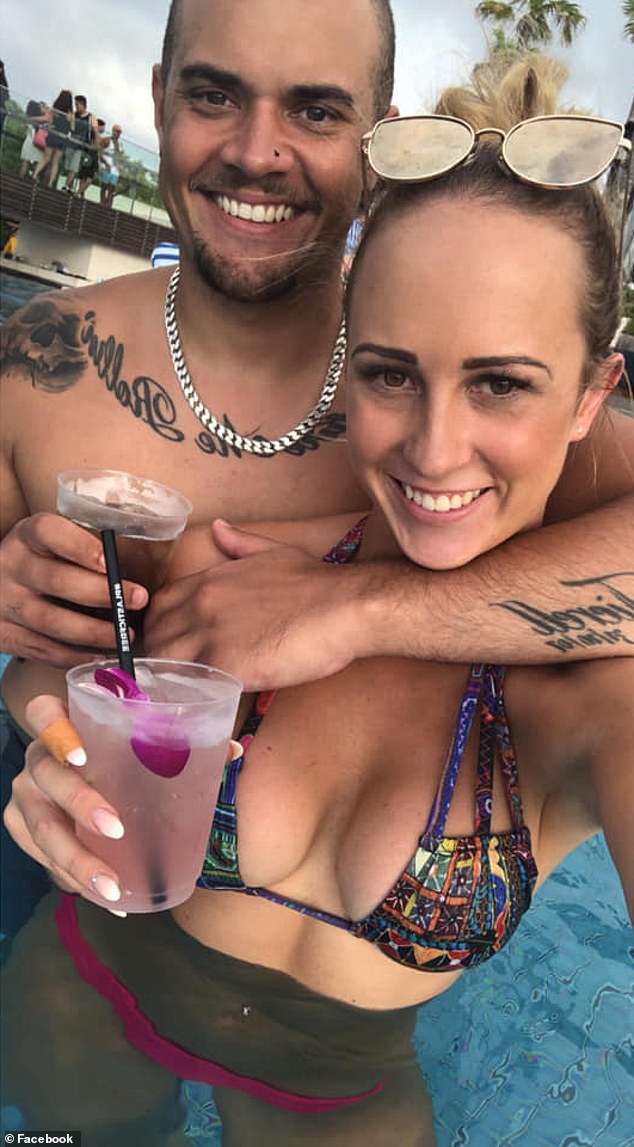 ‘Men often feel shame and grief from their relationship failing and worry about what it will mean for the relationship with their children,’ he said.

‘It’s like a living bereavement – they have gone from living with them and seeing them every day to often long periods with little contact.

‘Men feel a lack of control over their life and of how much they will be able to see the most important people in their life (their children) – it’s a rollercoaster.’

Mr Poole said men feared getting help because of a legitimate worry that any mental health history could hurt them in custody proceedings.

‘Sometimes it’s just too much for them to cope with and men are very solution-based and either can’t see a way out of their situation, or see suicide as the best option,’ he said.

‘Often they see it as a selfless act because they feel like a burden, but they need to realise they are valued and needed.’