A father-of-two, who was given just a year to live after his body became ‘riddled’ with cancer, has made a miraculous recovery after volunteering to be a ‘guinea pig’ in drug trials.

Adrian Webb, from Dudley, West Midlands, prepared for the worst when doctors discovered his skin cancer had spread to his lungs, lymph nodes, spleen, bowel, liver and spine.

Mr Webb, a manager at Headstock Distribution, is now speaking out to encourage other cancer patients to stay positive.

He said: ‘I have a great passion to tell people who are going through the same thing that you can beat this. You can win.’

Adrian Webb, who was given just a year to live after his body was ‘riddled’ with cancer, has made a miraculous recovery after volunteering to be a ‘guinea pig’ in drug trials 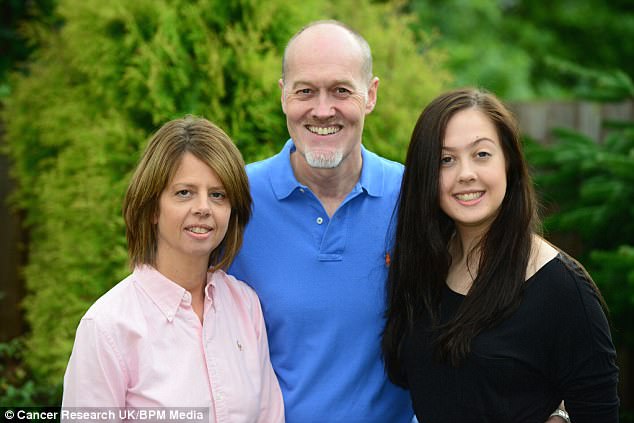 With few treatment options available to him, Mr Webb (pictured with his wife Michele and daughter Amelia, 22) volunteered to take part in three revolutionary clinical trials 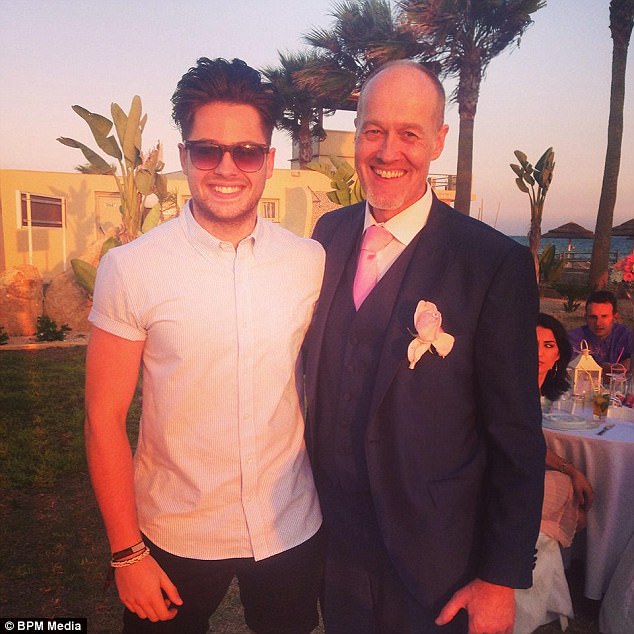 Dabrafenib, which also goes under the brand name Tafinlar in the UK, is used to treat melanoma skin cancer, particularly if it has spread or is not responding to treatment.

The drug is a cancer-growth blocker that sends signals to stop tumour cells growing and dividing.

It is only effective in patients with a change in a gene known as BRAF as it works on its protein.

Around 50 per cent of people with melanoma have a change in the BRAF gene.

Dabrafenib is taken as a tablet twice a day.

It is often consumed with another cancer drug, known as trametinib.

Dabrafenib can cause fevers, high blood pressure and rashes, as well as end-stage kidney disease and liver complications.

In November 2013, Mr Webb started the first of his trials, which involved him taking the medications dabrafenib, a cancer-growth blocker, and trametinib, which controls melanoma growth, for 12 months.

This was followed by a further two trials, which included intravenous chemotherapy and drugs that boosted Mr Webb’s immune system.

Despite suffering serious side effects, the trials were a success and Mr Webb is now in remission.

He said: ‘Dr Neil Stevens [the doctor who recommend Mr Webb start the trials] told me “Welcome to the Five Per Cent Club”.

‘I was in the five per cent who had survived.

‘The cancer had been everywhere, but I’m now cancer-free and in remission.

Despite the gruelling treatment Mr Webb had to endure, he always managed to stay positive due to the warmth of other patients.

He said: ‘I remember when I was having radiotherapy. Every morning I would see a young boy, probably about seven years old, coming in for treatment.

‘He would always give me a great big smile and wave. It was the sweetest thing.

‘It would always make me think that no-one should ever complain when this little boy could still smile.’ 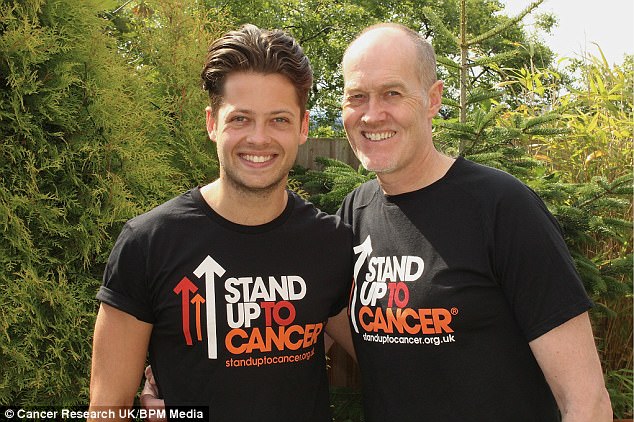 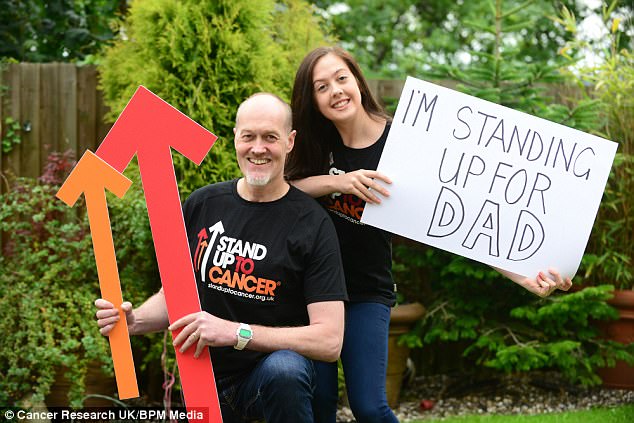 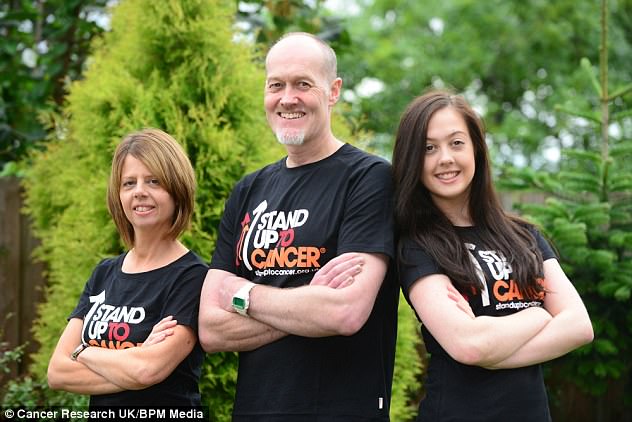 As well as taking two cancer drugs for 12 months, he also had to endure chemotherapy

Mr Webb has raised more than £16,000 for Cancer Research UK, even completing the Wolf Run, a 10k obstacle course over tough terrain, during his chemotherapy.

He has also toured the country giving talks about his cancer battle and the importance of having a positive attitude, eating well and keeping fit during treatment.

Mr Webb, who has been nominated for a Pride of Birmingham Award by Cancer Research UK for his fundraising efforts, said:  ‘I have a great passion to tell people who are going through the same thing that you can beat this. You can win.

‘I have a fantastic network of friends and family. How can I let them down? I couldn’t do that. I have to fight.’ 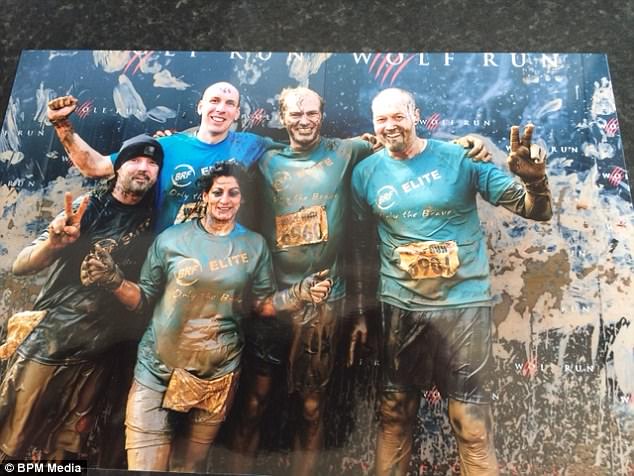 He completed the Wolf Run, a 10k obstacle course, during his chemotherapy treatment 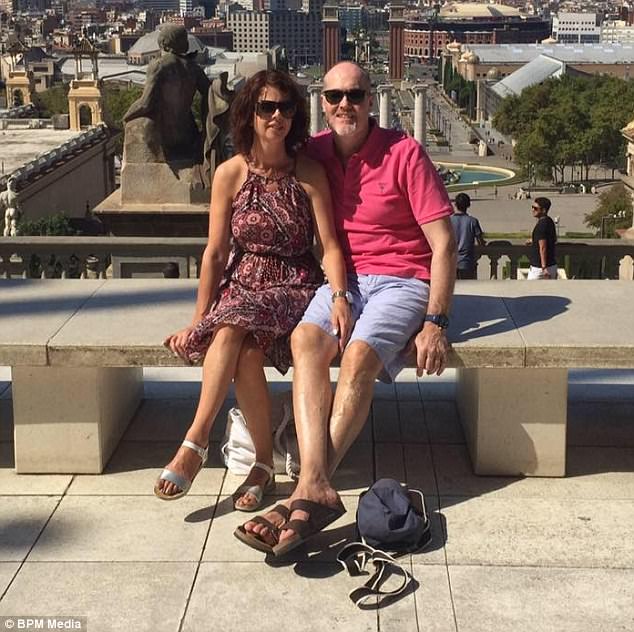 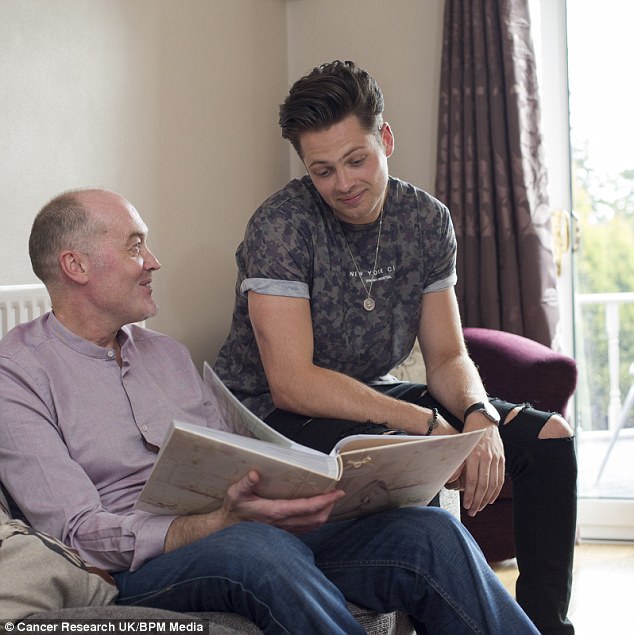 ‘My wife saved my life’

Mr Webb first became aware something was wrong when his wife Michele noticed a blemish on his back.

He aid: ‘My wife Michele saved my life. The mole was right in the centre of my back. I was totally ignorant of it and I was very closely running out of time.

‘My wife noticed that it was red and inflamed around the edge, and she booked me an appointment at the GP.

‘I had no choice about it really! I would have probably ignored it, being a typical man.’

Trametinib, also known under the brand name Mekinist in the UK, helps to control the growth of melanoma tumours by blocking the activity of abnormal molecules.

It travels in the bloodstream and is therefore effective at reaching places where the cancer may have spread.

Patients may also be given trametinib if their tumour cannot be removed via surgery.

Trametinib blocks the activity of a protein called MEK, which is part of a signalling pathway for another protein, known as BRAF.

Trametinib therefore only works in patients with a BRAF mutation, which is around half of melanoma sufferers.

The drug is taken as a tablet once a day.

Mr Webb had the mole removed during the GP appointment, with the blemish being sent off for a biopsy.

He later got a call from his GP, telling him he had cancer.

Mr Webb said: ‘I was in the office on my own when I got the call. She asked me if I was sitting down, and I asked her why.

‘Then she told me I had skin cancer. I was devastated. No-one ever expects that call to be to them.

‘I was referred to City Hospital, where they cut a big chunk of meat out of my back to try to prevent it spreading.

‘That was precautionary. They thought it was just in that area.’

Doctors were initially confident all of Mr Webb’s cancer had been removed, however, a few months later, while lifting weights at home, he discovered a lump the size of a golf ball under his arm.

He later underwent surgery to remove the lymph glands in his chest, followed by radiotherapy.

Yet the worse was yet to come, with Mr Webb being told he had stage-4 melanoma that had quickly spread to his lungs, liver, spleen, bowel and spine.

He was referred to specialist Dr Stevens, who told Mr Webb he may have just 12 months to live.

Mr Webb said: ‘I thought it was all over. I could hardly breathe. I cried like a toddler.

‘But I’m a positive person so once I’d stopped blubbing I shook myself off and asked what they could do.

‘Dr Stevens saved my life. He said, if I was willing, there was a new trial he could apply to put me on.

‘I told him I would try anything and to sign me up.’