A high-flying father-of-two who was a self-confessed ‘functional alcoholic’ has told how hypnosis helped him to overcome his addiction and saved his life – and his marriage.

Recruitment manager Gautam Raval, 42, from London, would knock back 12 miniature bottles of Smirnoff vodka to get through his working day at the height of his battle with booze.

After a decade of heavy drinking the alcohol began to damage his internal organs and Gautam was diagnosed with acute pancreatitis and required frequent hospital trips.

Doctors gave him a stark warning that if he didn’t seek help to help his kick the habit, he would die. 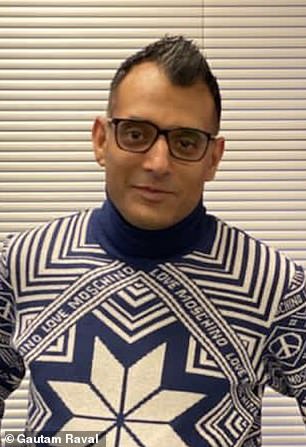 Recruitment manager Gautam Raval, 42, from London, would knock back 12 miniature bottles of Smirnoff vodka to get through his working day at the height of his battle with booze (pictured left then, and right now) 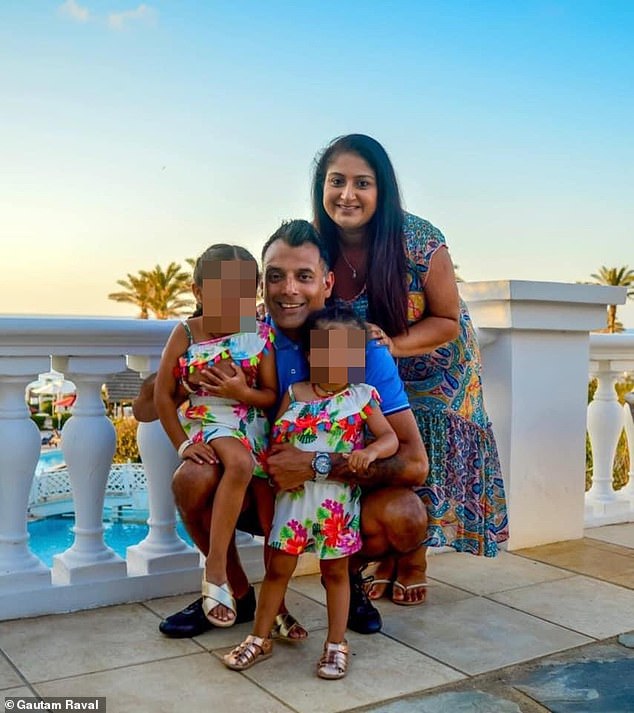 Gautam, pictured with his wife Sheetal and two daughters, said the hypnotherapy sessions ultimately saved his life and his marriage

It was the wake up call he needed and saw him seek help through Alcoholics Anonymous and prescribed medication. But when it became apparent both weren’t suitable avenues to help Gautam, his wife Sheetal who suggested hypnotherapy.

Gautam booked a session with Aaron Surtees of City Hypnosis, who has treated a range of stars including Ant McPartlin, Montana Brown and Charlie Brooker, and credits that decision with saving his life.

Having now been sober for eight years, Gautam explains why Aaron’s method and treatment plan helped him to overcome his addiction and banish alcohol from his life.

He told FEMAIL: ‘I had always enjoyed a drink and it became part of my after-work wind down or socialising routine from 2000 when I moved to the United States for work.

‘However when I returned in 2005 and found myself with a job in recruitment, that’s when the drinking escalated. Vodka became my weapon of choice. 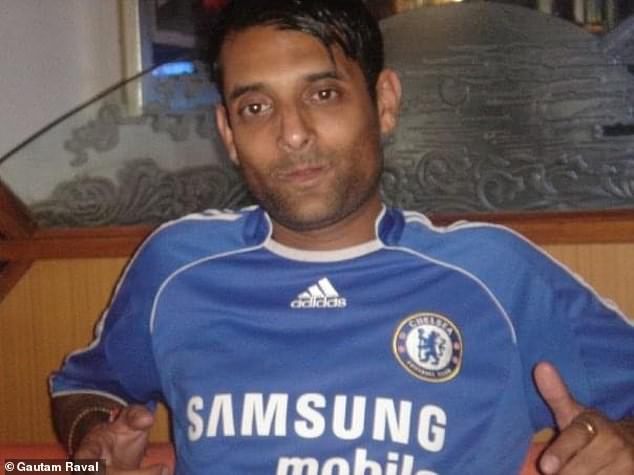 ‘The rewards for hitting targets are huge in recruitment and on pay day we would be taken out, all expenses paid, to swanky restaurants and bars where we celebrated.

‘This is when the daytime drinking started and it eventually turned into drinking at lunchtime every day of the working week.

‘I found drinking helped to take away whatever was bothering me. Eventually it became normal for me to start drinking in the morning.’

Gautam said he used to start his day with up to three miniature bottles of vodka before he went into the office, and then sank another two at lunchtime.

He’d follow that with another two or three bottles after work and anywhere between two to four bottles when he got home. 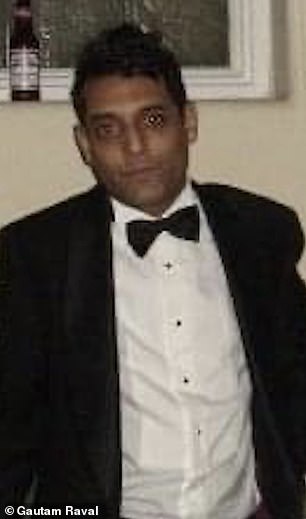 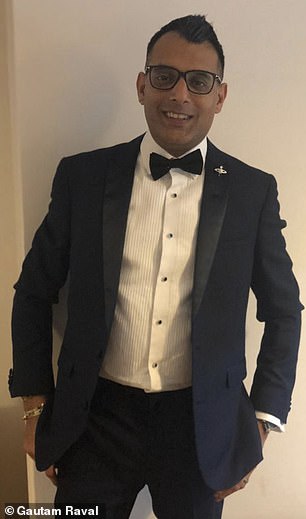 Gautam said he used to start his day with up to three miniature bottles of vodka before he went into the office, and then sank another two at lunchtime (pictured left during his addiction and right now sober)

‘I was eating throughout the day as well as consuming this amount of alcohol,’ he recalled. ‘Throughout it all I was continuing to work and was successful at my job.

‘I was never abusive or aggressive as a result of my drinking but I knew I wasn’t being a good husband to my wife, who I married in 2010.

‘As the years went on I found myself becoming increasingly angry and frustrated with myself as I hid the extent of my drinking from those closest to me. I would lock myself away from my family and my wife at the weekends.’

Gautam said he felt trapped ‘like a hamster in a cage just going round and round on a wheel’, caught in a vicious cycle. 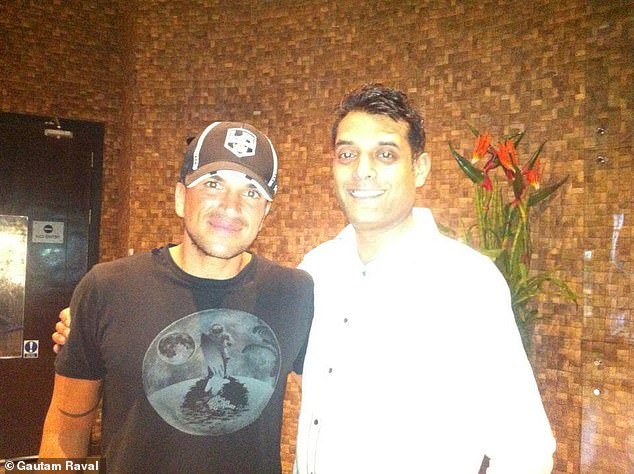 Gautam, pictured with Peter Andre in his wild drinking days, said he felt trapped ‘like a hamster in a cage just going round and round on a wheel’, caught in a vicious cycle

This continued for years until it all came to a head in 2013. He said: ‘At this point the neat vodka was starting to cause severe damage to my internal organs and I was diagnosed with acute pancreatitis and was in hospital multiple times.

‘I knew I needed help and I remember breaking down in tears at work, admitting I had a problem. This was the turning point and when I went home I told my wife the truth about my drinking and took that first important step of admitting I needed to get help.’

Gautam said he was at ‘rock bottom’ when he visited Aaron’s practice, but was put at ease by Aaron’s ‘soft and gentle tone’.

‘The session continued in this manner with Aaron just talking to me and relaxing my mind and body and asking me to go on a journey in my mind,’ he explained.

‘I know now that this is when Aaron plants positive messages in the subconscious mind. 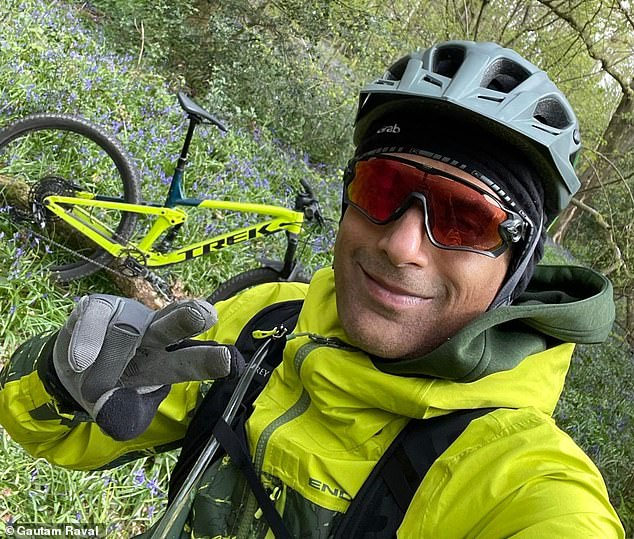 Gautam said he was at ‘rock bottom’ when he visited Aaron’s practice, but was put at ease by Aaron’s ‘soft and gentle tone’. He has now taken up cycling

‘At the end of the session I can remember feeling tired and I fell asleep in the car – my wife was driving – on my way home. I remember not wanting a drink for the first time in years after that first session and that I didn’t want to taste alcohol in my mouth.’

Gautam had around six to seven sessions with Aaron and during the trance state he was put in, Aaron would tell him that he didn’t like the smell or taste of alcohol.

‘I know that worked because after one particular session, I found myself on the Tube sitting next to someone who had been drinking and I had to move,’ he recalled.

‘Aaron was also helping to improve my wellbeing and mental health as I always felt upbeat after my sessions with him.

‘After the sessions finished I went on to have kids and buy a house. Eights years of sobriety have passed and I have never been more happier or content.

‘Aaron’s method was a gradual process rather than a quick fix and took commitment on my part and a desire for it to be successful but I can honestly say it 100 per cent worked for me.’