Father raises $12,500 for charity after Twitter users urged him to dye his hair bright blue

A 42-year-old man has managed to raise a whopping $12,500 for charity simply by dying his hair blue and sharing the process online.

Matthew Green, a cryptographer and security technologist from Hanover, New Hampshire, took to Twitter on Monday, June 24, to reveal that his son wanted to dye his hair blue. However, the child said he would only dye his hair if his father did, too.

A fellow Twitter user then urged Matthew to go through with the decision, offering to donate $300 to the Refugee and Immigrant Center for Education and Legal Services if he saw that Matthew had dyed his locks blue.

Amazing! Matthew Green, 42, from Hanover, New Hampshire, has managed to raise a whopping $12,500 for charity simply by dying his hair blue

Decisions: The cryptographer and security technologist said his son wanted to dye his hair blue, but he wouldn’t do it unless Matthew agreed to change his hair color as well

Offer: Filippo Valsorda – a cryptographer at Google – offered to donate $300 to the Refugee and Immigrant Center for Education and Legal Services if Matthew dyed his hair blue

Donations: After Filippo said he would donate money to charity if Matthew dyed his hair, dozens of others offered to give money to the charity

Matthew’s first tweet, which has since gone viral, read: ‘My kid wanted to die his hair blue but would only do it if I also did and now I’m questioning this whole “parenting” decision.’

After seeing Matthew’s tweet, Filippo Valsorda – a fellow cryptographer who works at Google – said: ‘I will donate $300 to RAICES to see this happen.’ 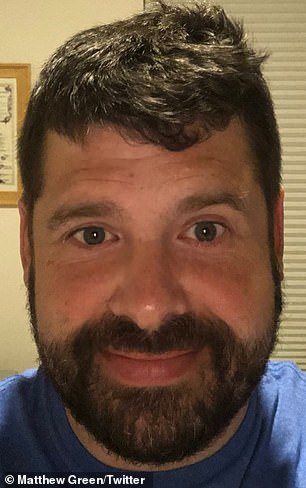 Agreed! Matthew (pictured with his natural hair color) agreed to go through with it, as he knew he would raise money for a good cause

Filipo’s tweet attracted dozens of responses, as different users said they were also willing to donate money to the non-profit if Matthew dyed his hair blue.

Shortly after, Matthew admitted that the situation had become ‘super weird’, before adding that he had booked an appointment at a local hair salon in Florida.

‘I have an appointment to bleach and dye my hair in an hour.

‘Apparently I have to provide the dye myself because the fancy salons around here don’t do “fashion colors,”‘ he said.

In a subsequent tweet, Matthew said the only reason he was going through with the decision was because it would mean he could raise money for a good cause.

After many different users offered to donate money, Fillippo revealed that Matthew dying his hair could raise up to $12,500.

Matthew jokingly said he thinks the only reason people were willing to donate is because ‘they know how ridiculous I’ll look showing up at a DARPA (Defense Advanced Research Projects Agency) meeting.’

He then shared a picture of two boxes of bright blue hair dye. One color was called ‘blue mercury’, while the other, which was an ombre hair dye kit, was labelled ‘turquoise reef and blue crush’.

Strange: Matthew tweeted that the situation has got ‘super weird’, as he clearly didn’t expect people to offer to donate money to charity

Preparation: Nevertheless, he said he booked an appointment at a hair a salon, and added that he had to provide the blue dye himself, as the salon don’t offer ‘fashion colors’

Good cause: He said the only reason he agreed to dying his hair was because he knew it was all for a good cause 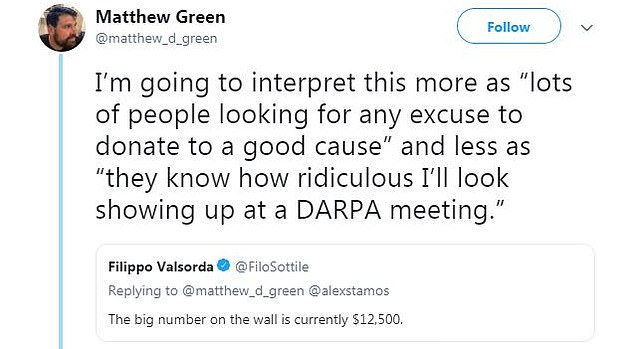 Wow! After many different users offered to donate money after Fillipo revealed he would donate, he later said that Matthew dying his hair could raise up to $12,500 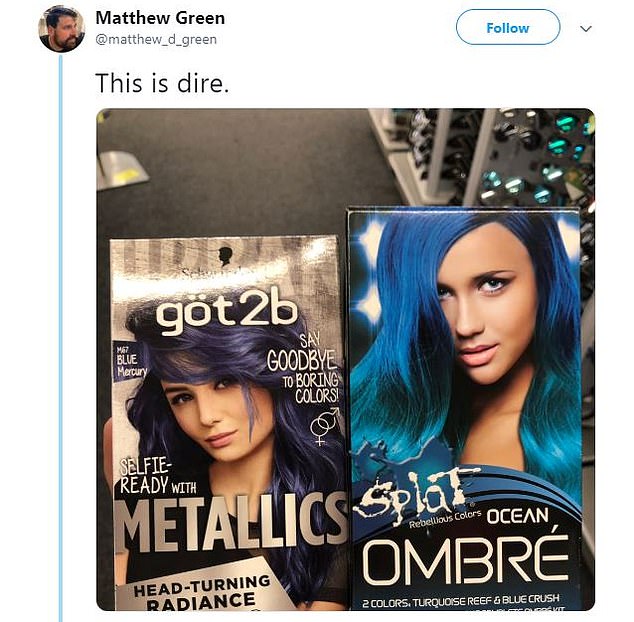 Yikes! He shared a photo of the two box-dye colors he bought – one of which was described as ‘mercury blue’, while the other – an ombre dye – read: ‘turquoise reef and blue crush’ 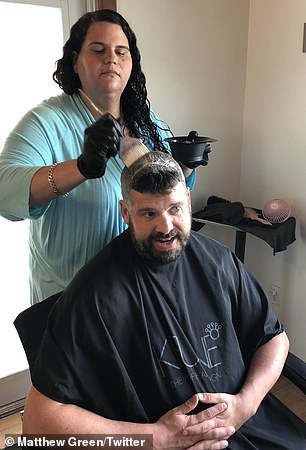 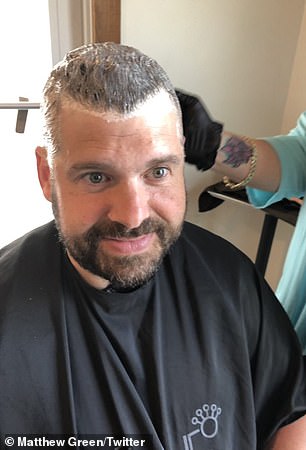 Professional: Matthew had his hair bleached and dyed by a hairdresser named Marie (pictured left), who works at the TriBeCa Salon in Sanibel, Florida 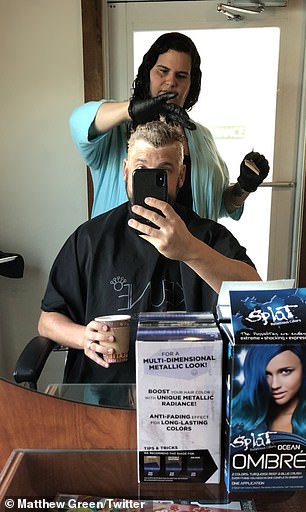 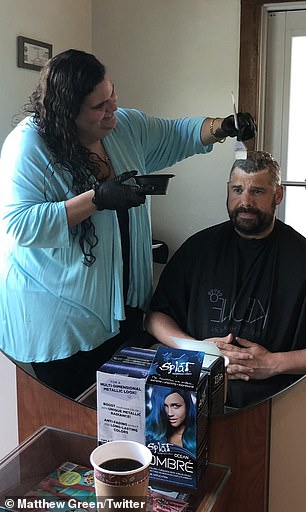 Process: ‘Oh my god how do people do this,’ Matthew said, captioning a photo that showed him having his hair bleached by a professional in a local salon

Matthew’s next tweet read ‘oh my god how do people do this,’ and included a photograph of him sitting in a chair at a hair salon, while a worker bleached his hair.

‘Pictures are going to get a little sparser here because apparently with blond hair I’m basically Guy Fieri,’ he said.

‘The great thing about being a computer scientist is that nobody cares what you look like, so you never have to deal with this kind of crap,’ Matthew added. 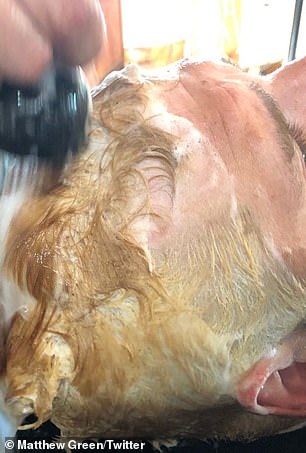 Nearly there: After the bleach was applied to Matthew’s hair, the hairdresser rinsed it out

The 42-year-old shared a selfie as he posed to show off his newly bleached hair, adding a caption that suggested he was nervous about his soon-to-be new hairstyle.

The next image in the hilarious thread, which at this point had garnered quite a lot of attention, showed that Matthew’s hair was in the process of being dyed blue.

Alongside an image of him sporting the new look as he waited for the color to fully develop, he wrote: ’30 minutes to cook on this. Hope you’re making those donations people.’

Once he was finished in the hair salon, Matthew revealed the finished look in a selfie that was taken from a side on angle.

Matthew, whose hair was now two different tones of bright blue, wrote: ‘Well that is… something.’

In a subsequent tweet, within which he shared another selfie, he said: ‘So @RAICESTEXAS should be $12,500 better off. A great cause even without the hair.

‘Thanks @FiloSottile and many, many others. I may need to sign off Twitter soon just to keep people from making me dye the beard too,’ he added.

Hilarious! Matthew compared his appearance with his bleached hair to 51-year-old restaurateur Guy Fieri, who has bleach-blonde, spiked hair

Funny: While he was having his hair done at the salon, he tweeted, saying that the best part of his job is that ‘nobody cares what you look like’ 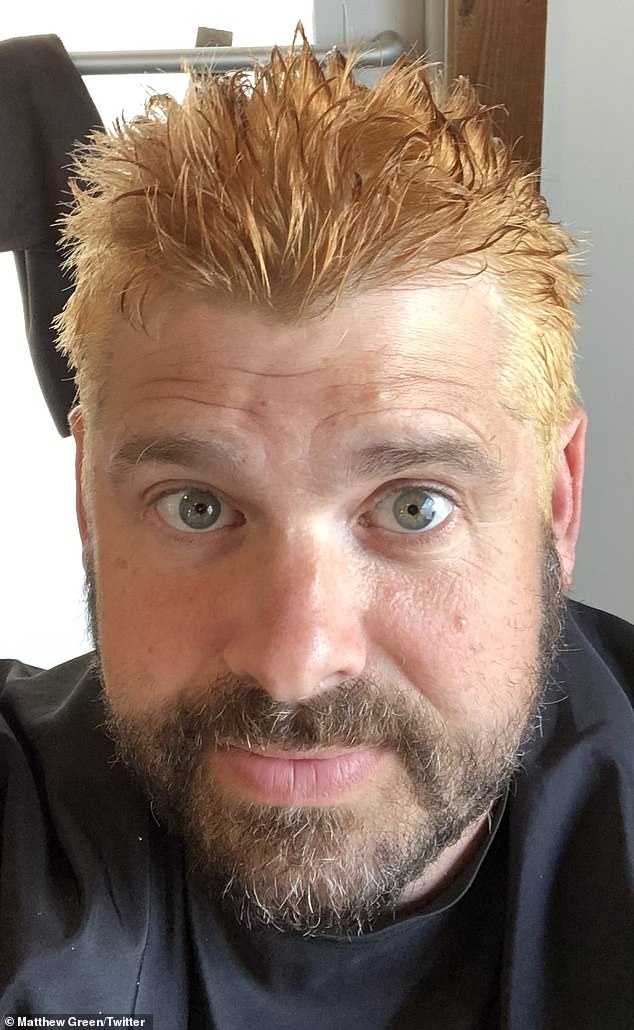 Halfway there: He shared a selfie as he posed to show off his newly bleached hair, adding a caption that read: ‘Oh god’ 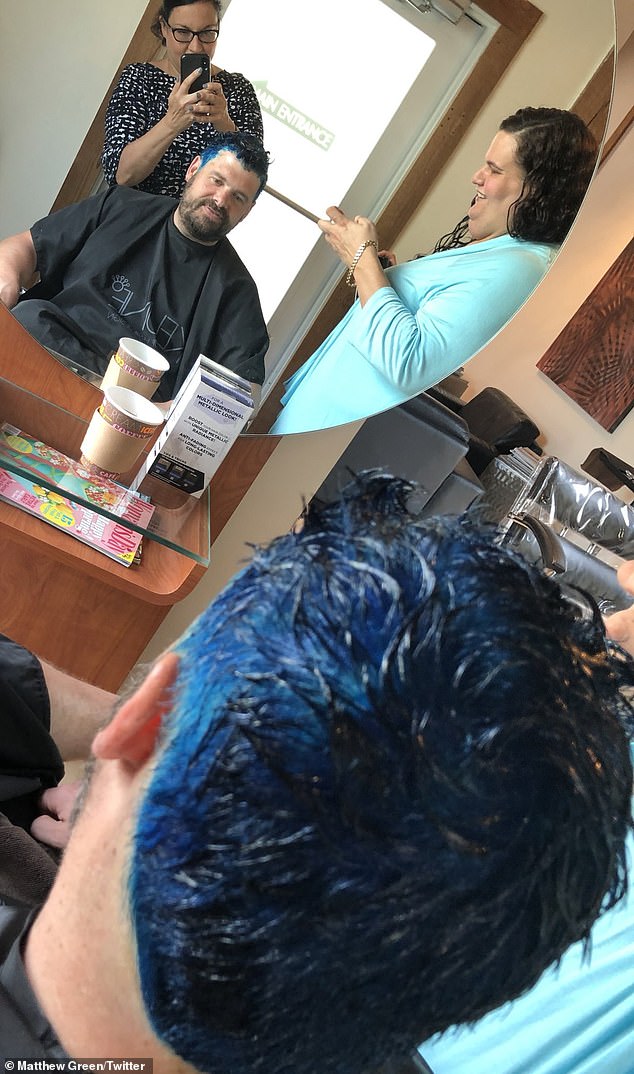 Wow! Halfway through the process of dying his hair, Matthew posted a photo and urged people to make donations for the charity 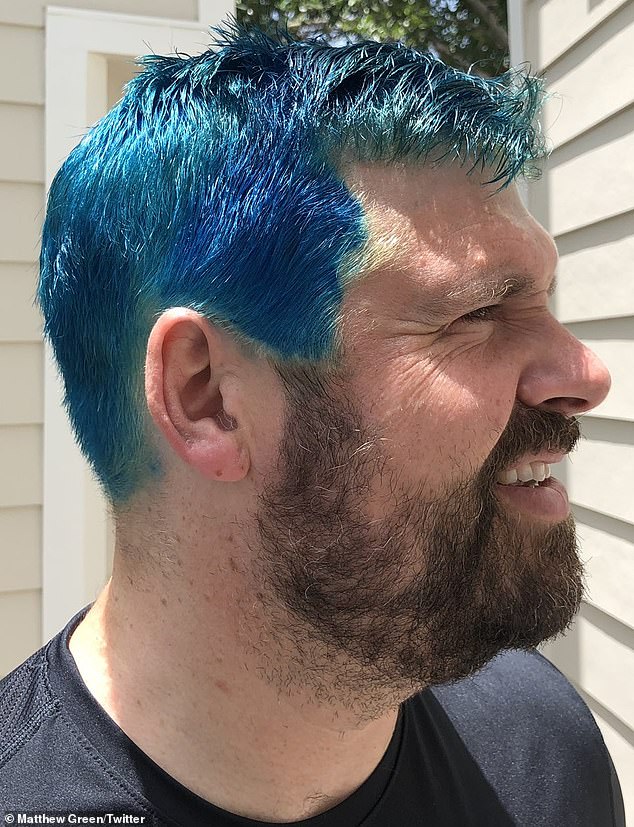 Voila! Finally, the father shared a photo of the finished result, which showed that his hair was dyed two different shades of bright blue

Since Matthew shared his tweet on Monday, it has gone viral, garnering over 3,500 likes and a further 300 shares.

Meanwhile, hundreds of Twitter users commented on the now viral thread, praising him for dying his hair for a great cause.

One user said: ‘You are a wonderful person,’ while another jokingly added: ‘You aren’t Mathew Green anymore, but Mathieu Bleu.’

Another said: ‘This thread turned out to be amazing. Thank you for sharing and dying your hair!!’

‘Good for you dude,’ one user said.’ Shows the kid to follow through on everything he does, and brings $$ to the table for a good cause. Solid bruh.’

Similarly, RAICES responded to Matthew’s tweets to thank him for raising the money.

The charity said: ‘Wow. Love this story. Thank you @matthew_d_green, your kid, and to everyone who supported this epic new look.’

Founded in 1986, the Refugee and Immigrant Center for Education and Legal services is a nonprofit organization based in Texas.

The charity aims to help separated families, detained families, unaccompanied minors, and others who are seeking asylum in the United States.