A man who was released from jail after being found not guilty for his son’s death says he is now the target of a ‘lynch mob’ in his hometown.

Christopher Gibson, who spoke to A Current Affair, said his son Shawn had threatened to kill him and that he only defended himself after being attacked.

‘All I did was try to tell him what he was doing was wrong and he said, “I’ll kill you”,’ he said.

In a police interview, Mr Gibson said he was holding a kitchen knife and preparing for dinner when Shawn tried to attack him.

Mr Gibson said he defended himself by lifting his arms while holding the knife, which struck Shawn and went ‘straight to his neck’, according to 9 News.

However, locals of his hometown in Lismore are not convinced – and still want him out of their town.

‘Has this guy gotten away with murder?’ someone from A Current Affair asked a group of locals.

‘He has,’ two men in the group replied.

‘Most certainly,’ another one said.

‘He shouldn’t be walking out of the courthouse smiling the way he was,’ a local named Brenton told 9 News.

Mr Gibson said: ‘I’m warning them that I’m not going to go down easy, not if they want to torture me,’. 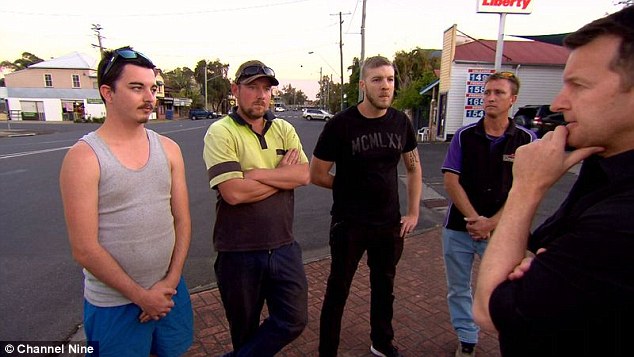 However, locals were not convinced by Mr Gibson’s explanation – and they still want him out of their town

Shawn’s mother, Patricia, talked about Mr Gibson’s violent tendencies, citing incidents when he had threatened to kill her and even assaulted her boss.

Mr Gibson was jailed for 18 months as a result, according to 9 News.

Patricia said Shawn was a victim of his violence, saying that she previously told her son she wanted Mr Gibson to go.

She believes this is what angered Mr Gibson and provoked the attack.

Shawn’s partner Jade expressed similar sentiments, saying she would not be able to forgive Mr Gibson.

Following Mr Gibson’s verdict in court, he thanked the jury and expressed remorse over the incident.