Father stuns doctors by waking up from his six-week coma

Father, 61, stunned his family after waking from a six-week coma with a smile on the morning doctors planned to switch off his life support machine

As he woke the retired patient smiled at his astonished nurse and gently squeezed her hand.

“Miracle Mart”: Father, Martin Jervis, 61, has been dubbed “Miracle Mart” after waking up from a six-week coma just four hours before doctors at the Royal Stoke University Hospital were set to turn of the life-support machines keeping him alive

The keen cricketer was rushed to the Royal Stoke University Hospital where he underwent a five-hour operation to remove the blood clot and treat bleeding on the brain.

Doctors told his wife that there were no signs of brain activity and over the next two weeks his family feared the worst.

Showing no signs of improvement, relatives considered switching off the father-of-two’s life-support machine on three occasions. 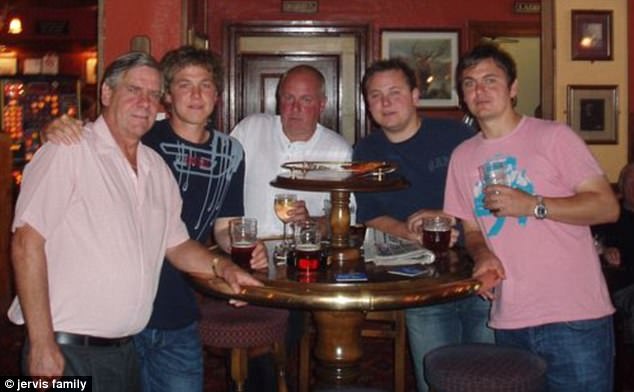 Family man: Father Martin Jarvis pictured enjoying a pint with his sons Jamie and Richie, as well as his brother Stephen and nephew Deane

Nevertheless his wife was determined that her husband should have one more CT scan before doctors pulled the plug on his life support.

Only 13 per cent of coma victims survive if they fall into an unconscious state within 24 hours of their injury, research suggests.

Severe head injuries and strokes – a potentially fatal blood clot in the brain – can lead to a coma.

In this deeply unconscious state, the patient cannot be woken up and often are kept alive by life support machines.

Comas tend to last only a few weeks. Patients often begin to regain consciousness gradually. In some cases comas can last for years.

The longer a patient remains in a coma, the lower their chances of survival and the more likely they are to suffer long term side effects.

In a coma, patients can develop brain stem death – when they have permanently lost the ability to breathe and stay alive on their own.

Doctors are unable to predict survival chances, and sometimes ventilators are turned off to stop the patient from suffering if they show no signs of brain activity.

In 2003, a patient named Terry Wallis, from Arkansas, woke up from his coma after 19 years. Experts were baffled by the medical mystery.

‘He decided to wake at 4am that morning,’ Barbara explains adding ‘we couldn’t believe the phone call we had received at 8am that morning!’

Friends and family are still waiting to find out exactly what caused Martin to collapse at his home.

He lay by himself for over an hour hours before his wife returned home to find him unconscious at their house in Bignall End, Staffordshire.

Barbara said: ‘I had been out and came back home to find bits and pieces broken, there was blood on the floor, and he was lying there still.’

Martin’s brother Stephen, 65, said: ‘To go from preparing to switch off the life-support machine to him waking up was phenomenal.

‘I thought it was a nasty prank when I had a call from the nurse but she said she was serious and he had woken up. I couldn’t believe it.’

Although not yet able to walk on his own, he has been able to go outside in his wheelchair and he’s now even able to talk after a nurse attached a speaking valve to his Martin.

He reportedly used his new vocal abilities to proudly declare that he supports the Premiership football team, Manchester United.

Nephew Deane has started on online fund-raising appeal to raise money for equipment to help Martin when he gets out of hospital. 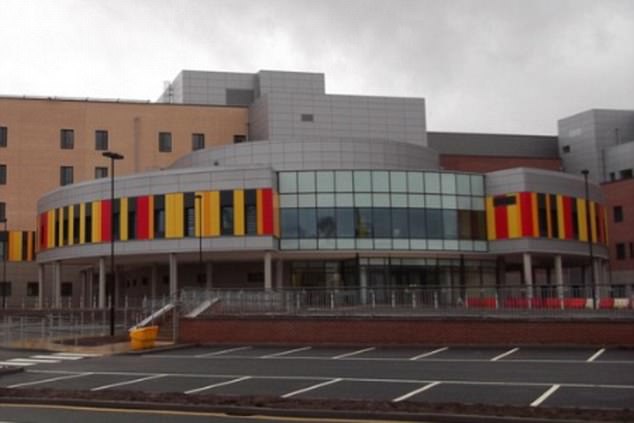 The 38-year-old said: ‘We’re hoping to raise enough money to aid his recovery after he gets home. We still don’t know what he will need but we’ve had a lot of support from people.’

Deane recently updated followers on the fund-raising page explaining that although his uncle is still on a ventilator, he has made ‘some remarkable improvements over the last week.’ 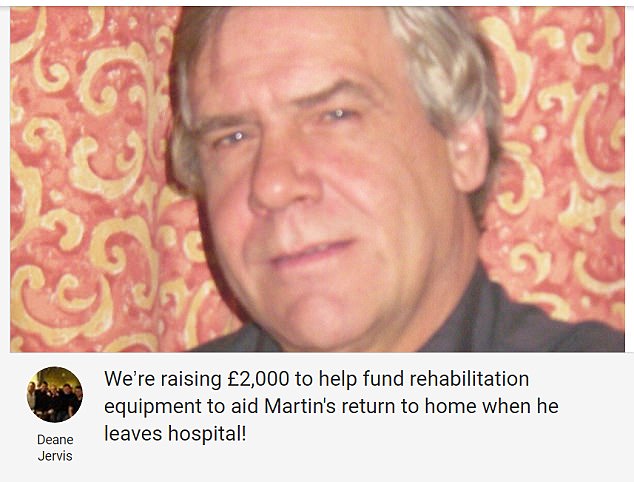 Get well soon: The friend’s and family have been giving generously to a fund-raising appeal which will pay for the rehabilitation equipment Martin will need to have installed in his home