Father takes the internet by storm with clever breastfeeding hack

An innovative father-of-five has taken the internet by storm – after hitting on a hack that allows him to ‘breastfeed’ his fussy baby daughter while her mother is at work.

Anthony Favors, a 31-year-old chef from Buffalo, New York, has captured the imaginations of fellow parents with his clever trick to ensure 10-month-old daughter Lily’ahna feeds while his wife Shalanda Favors, 25, is out.

Lily’ahna happily nurses but refuses to bottle feed, so her dad cut a small hole in his shirt and poked the teat of a bottle filled with his wife’s breast milk through the gap,  to create a ‘functional boob’.

Lily’ahna ‘loved it’, her dad said, adding that the experience has ‘made me feel so much closer to my baby girl’.

Anthony Favors, a 31-year-old chef from Buffalo, New York, has captivated parents around the world with his clever trick to soothe 10-month-old daughter Lily’ahna through a hole in his shirt

Anthony said he and his beautician wife Shalanda – who are also parents to Anthony Jr., two, Josiah, five, Savanna, six, and Camiya, nine – were having trouble figuring out how to feed their fussy baby girl when dad was in charge, because Lily’ahna has breastfed since birth and would ‘always cry’ when presented with a bottle.

‘I’ve always had trouble feeding Lily’ahna because she is a very fussy baby,’ he said.

‘She would always just want her mom’s boob because it really soothed her. I’d always feel so useless and wished there was something I could do to help.

‘When I was taking care of her, she’d constantly be grabbing my chest and just shook her head at the bottle.

‘I would tell her “I’m sorry baby, I don’t have milk in there”. It made me laugh. But she would get so frustrated and start crying, thinking that I was holding out on her.’

But when his baby daughter was five-months-old, Anthony said he finally had enough of her refusing the bottle and ‘screaming the house down’ when his wife was at work.

It was then he decided to take matters into his own hands and came up with the genius hack.

‘One day I just had enough and had to think of a quick solution when Shalanda was at work,’ he said. 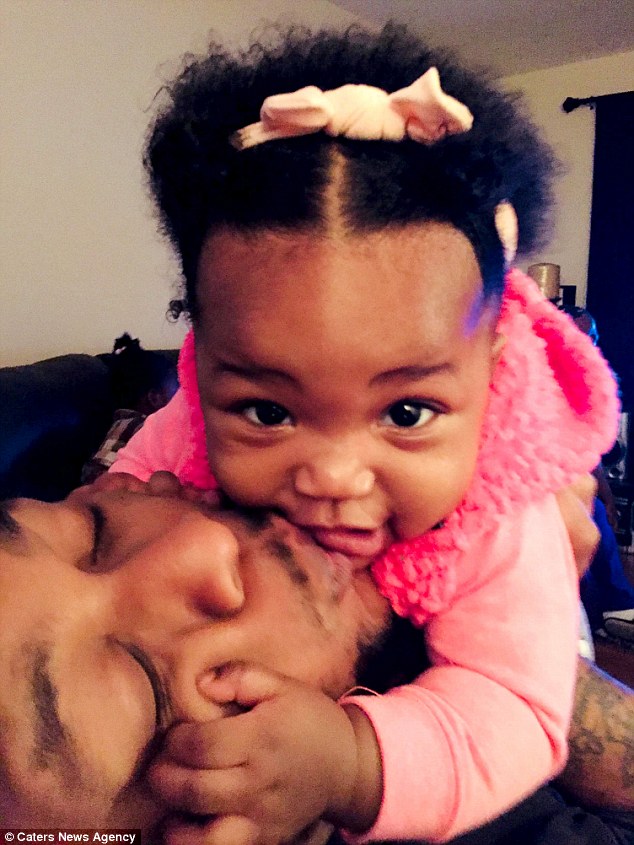 ‘The idea just came to me. I cut a hole in my shirt and stuck the top of the bottle through.

‘My wife couldn’t believe that I actually cut up an expensive shirt. But that wasn’t on my mind at the time. All I cared about was my baby.’

Anthony said that when he first tried ‘breastfeeding’, Lily’ahna was ‘a little suspicious’ of her dad’s new ‘nipple’, but after he squirted out a bit of milk and she got a taste, the daddy-daughter duo have never looked back – and now the loving father uses the trick all the time.

‘She was really confused at first, but after I poured some milk out she realised what it was and started drinking,’ Anthony admitted.

‘She absolutely loved it and it made her really happy. She went straight to sleep.

‘I was so relieved that I had figured something out. I felt like the best dad in the entire world.’

When he shared a video of his trick on social media it went viral, with almost 200,000 shares to date.

And Anthony credits his wife for inspiring him to be the best parent he can be, adding: ‘I’ve always been in absolute awe of my wife throughout her pregnancies and in childbirth.

‘It’s amazing what a mother’s body can do for their children and the sacrifices they have to make. I see my wife breastfeed and I can see how hard it is. I’m so proud of her and everything she does.

‘It makes me feel so good that I can give her a break from that and she doesn’t need to worry when she needs to head out or go to work.

‘Mothers and fathers should both have equal responsibility for their children. It has given me so much confidence.’

It has created such a special bond between Anthony and his daughter that he even admits he wishes he had done it with his other children.

‘I wish I had tried it on my other kids,’ he said. ‘It has made me feel so much closer to my baby girl.

‘When she looks up at me with those eyes while she is feeding I can see how much she adores me.

‘I will keep doing this for as long as it takes. I’ll always be there for her when she needs me.’