The shopper who could ban ALL face recognition cameras: Father tells court that system is sexist, racist and illegal

Father-of-two Ed Bridges has launched his claim in the High Court against the Home Office and his local force, South Wales Police

Police facial recognition cameras could be prohibited across the country after a man who was filmed while shopping brought a landmark case.

Father-of-two Ed Bridges has launched his claim in the High Court against the Home Office and his local force, South Wales Police.

He is being supported by privacy and human rights campaigners.

They contend the technology not only breaches data protection laws, but is also racist and sexist because it fails to distinguish effectively between different women or ethnic minority members.

Mr Bridges had stepped out of his office at Cardiff University to go window-shopping for Christmas presents in December 2017 when he spotted a police van with a camera on top.

The 36-year-old told The Mail on Sunday: ‘I didn’t think anything of it until I was close enough to read the words ‘facial recognition technology’ on the van.

‘When you are close enough to the van to read that, it will have captured your biometric face data several times over. That struck me as an invasion of my privacy.’

He thought no more of it at the time, but in March 2018 he took part in a protest outside Cardiff International Arena against an arms fair, and after seeing a police van equipped with facial recognition cameras, he felt he was being ‘treated like a criminal’. 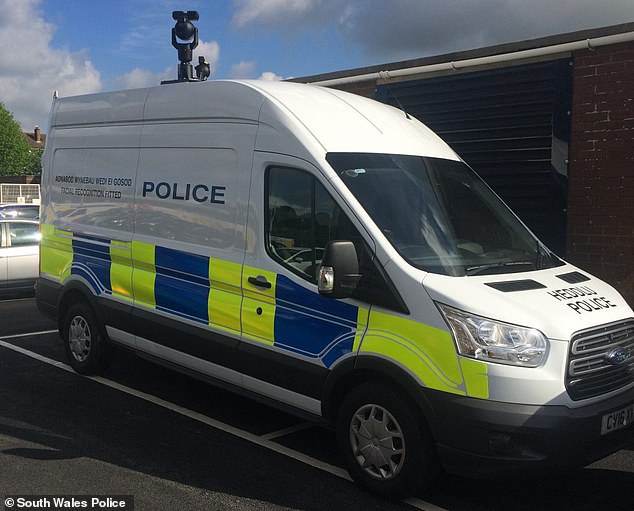 He said: ‘I felt this was being done to try to discourage people from using their right of peaceful protest and intimidate the crowd who were causing no bother.’

At the time, facial recognition cameras were being used only by South Wales Police and Scotland Yard, although forces in Leicestershire and Greater Manchester had also tested the system.

Mr Bridges contacted the campaign group Liberty, as he knew it was challenging the Met’s use of live facial recognition technology.

With the help of Liberty, who provided Mr Bridges – a former Lib Dem councillor – with a solicitor, he brought a challenge to the use of the cameras to the High Court in May. He received £6,000 in donations from members of the public who support his case.

The facial recognition technology that can spot 300 faces a second

Live facial recognition technology is said to provide ‘a fingerprint of a face’ by using special cameras which are mounted on police vans or on lamp-posts to monitor public areas.

The cameras are powerful enough to scan 300 faces in a crowd per second.

The technology first captures images in the same way as a conventional CCTV camera.

Next, the computer software scans each face individually to make a ‘biometric code’ as unique as a fingerprint.

Then the software compares each one against a database of faces. If a match comes up for a suspect, that person may be stopped and searched by officers.

Opponents of the system have raised concerns over the potential invasion of privacy, and fear it is too unreliable – resulting in innocent people being detained.

The system is also being used in the US, but three cities – San Francisco, Oakland and Somerville – have banned it on privacy grounds.

Mr Bridges and his lawyer argued that the cameras are discriminatory and breach equality laws, as they have been developed to catch mainly white Caucasian males, who make up the majority of suspects in the legal system.

The cameras are far less accurate in identifying women and ethnic minorities – meaning that innocent members of those groups are more likely to be wrongly identified and stopped by police.

Megan Goulding, the Liberty lawyer acting for Mr Bridges, said live facial recognition technology has been introduced by police without Parliament actually legislating for its use.

She said: ‘Because there is no legal framework for the police forces to follow, they are making the rules up as they go along.’ 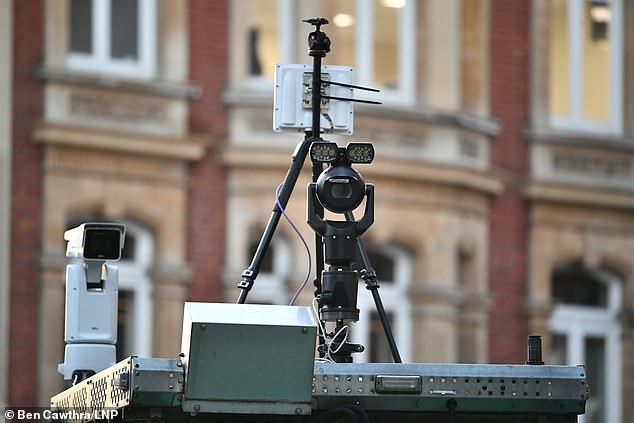 With the help of Liberty, who provided Mr Bridges – a former Lib Dem councillor – with a solicitor, he brought a challenge to the use of the cameras to the High Court in May. He received £6,000 in donations from members of the public who support his case [File photo]

Police forces contend that the use of live facial recognition technology cameras is permitted under the same laws that allow CCTV cameras, but Ms Goulding disagrees.

Data compiled by an independent study on the Met’s use of the system found that its cameras were inaccurate 80 per cent of the time.

Parliament’s Science and Technology Committee has warned police in England and Wales to stop using the technology. However, the Home Office has said that it is now considering widening its use. Last night, South Wales Police said it will carry on using the cameras.

The High Court will reveal its decision over the legality of live facial recognition technology later this year.