Father tells how he saved boy on paddle board from Harvey

The mysterious Good Samaritan who was pictured rescuing a little boy from the Hurricane Harvey floods on his paddle board can now be unveiled as a French father-of-two who saved the child before getting his own family to dry land.

Alexandre Jourde, a 42-year-old from Paris, won hearts on Monday when a photograph emerged of him paddling four-year-old Ethan Colman to safety.

Both live near the Buffalo Bayou area of Houston where thousands have been displaced due to the rising floods.

Jourde, an oil and gas engineer, was preparing to leave his home with his wife and their two children when a stranger approached him and asked him to help Ethan get out.

Speaking to DailyMail.com on Tuesday, he told how he paddled the boy to dry land then waited with him until his relatives arrived on foot before going back to his house to get his own wife and kids.

‘They asked me for help as I was about to get my kids. It bought us some time while my family packed our belongings.

‘I don’t even think the person who asked for help even knew the boy’s family… they realized there was a safer way than carrying him through the water which was filthy.’

With his own family safe in his house with no water yet creeping in, Jourde paddled Ethan to dry land then waited with him until his relatives arrived before heading back to his home.

‘I knew they had a plan to escape so I got the boy to a dry place then his family came and I went back,’ he said. 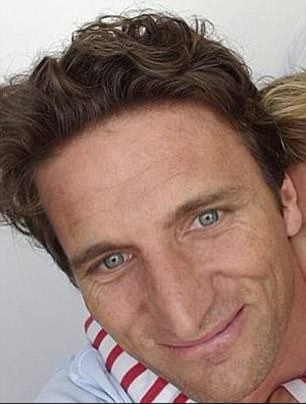 He then made two more trips – one to rescue his children aged eight and six, and another to get his wife.

The father-of-two had never met Ethan before but said he was grateful the boy was so calm throughout the rescue.

‘He was very calm. It was lucky. He wasn’t scared which was good. I was scared of him falling off because I did not know if he could swim.’

DailyMail.com has spoken with members of Ethan’s family who say they are safe but understandably shaken.

They are sheltering with friends and do not yet know when they will be able to return home.

Jourde and his family were among thousands of Houston residents who were awoke on Monday morning to find their neighborhoods drowning after the release of water from two dams on the outskirts of the city.

‘That’s when we knew we were in trouble,’ he said.

They had been following weather reports but were never ordered to evacuate.

On Sunday night, fearing what would occur overnight, they moved their furniture from the ground floor of their home upstairs and went to sleep uncertain of what they find the next day.

Jourde said it took him a matter of minutes to decide on Monday morning that they must flee in order to be safe.

‘The water was still not in the house at this point but it was about to come in so we spoke to our friends and our neighbors and we decided to leave.’ 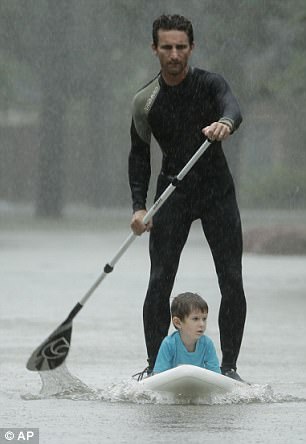 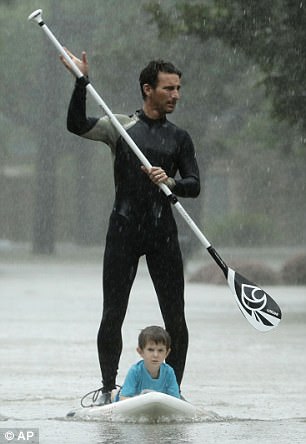 In a stroke of genius, he remembered the paddle board in his garage and dug out his wet suit.

‘We couldn’t take our car because it wasn’t high enough and we’d heard so many stories of people getting stuck.

‘There was no other way to escape other than swimming or using whatever you had.

‘I used to paddle a lot before we moved to Houston but not so much now. When we decided to leave, I remembered I had it in the garage,’ he said.

A neighbor who had a small inflatable boat helped move the Jourde children to their friends’ home while their father paddle-boarded their suitcases.

He then returned to get his wife and they retreated to a friends’ house where they remained on Tuesday morning.

They do not know what kind of state their home is in and are now confronted with the dread of dealing with insurance companies to help cover the cost of repairs and replacing their belongings. 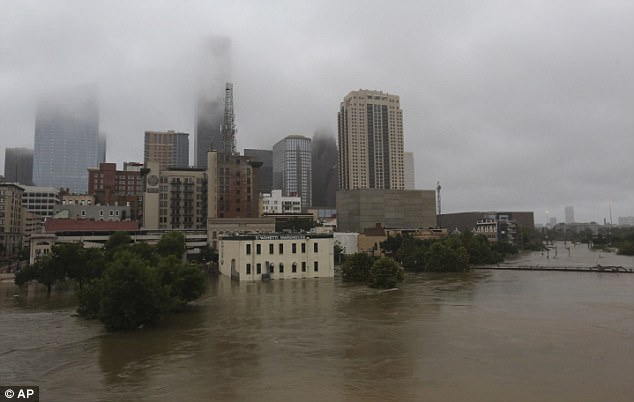 Both Jourde and Ethan live in Buffalo Bayou which has been entirely flooded by Harvey. The area is pictured above on Monday 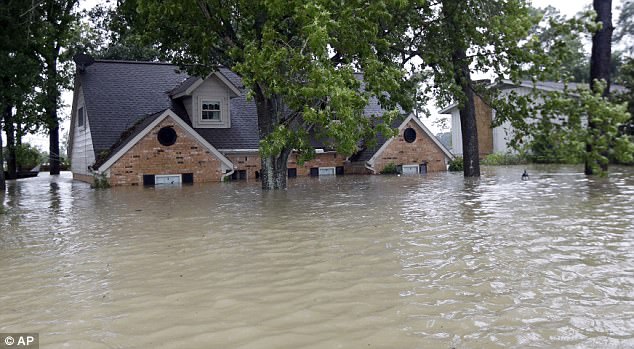 A home in Spring, Texas, is almost entirely submerged in flood water on Monday

The Frenchman, who moved to the US last year for work, said he ‘never expected’ the devastation they now face.

‘We’ve been in many countries that are less fortunate. We never thought this would happen in the US.’

For now, his children are in high spirits.

‘I don’t think the kids realize the danger. They see more the fun side of it. They aren’t too shaken by the whole thing, especially because they are with friends too they see it more as fun.

‘They don’t realize they’ve lost probably half of all their toys,’ he laughed.

Rain continues to soak Houston and the floods show no sign of receding soon. There are more than 5,000 people in shelters across the state and more are expected to need accommodation in the coming days and weeks.

At least 11 people are feared to have died but the emergency services – which have been overwhelmed by the disaster – have no way of confirming the death toll at present.

They are still carrying out rescues in the water and are pleading for donations to be made to shelters and the many relief funds now in place.