A father who lost both legs, his hand and most of his fingers when he was a child will at last get a bionic hand to help care for his baby.

Danny Florence, a bank worker from Durham, decided to try and raise funds for the mechanical limb earlier this year after becoming a first-time father.

He has lived most of his life without his hand after fighting life-threatening meningitis at the age of five.

But he felt he was missing out after the arrival of Joshua, unable to bathe and dress him or change his nappy.

The 26-year-old had raised a third of the £10,000 money needed for the bionic arm when manufacturers offered to sponsor him.

He will have an Open Bionics Hero Arm fitted this month, just in time for Christmas. The 3D arm is controlled by his own muscles, making it the most realistic prosthetic he can get.

Danny Florence, a bank worker from Durham, will receive a bionic arm so that he can care for and bond with his son, Joshua, who turns one on December 11 Mr Florence lost his right hand, three of the fingers on his left hand (pictured) and both of his lower legs when he was five and battled meningitis 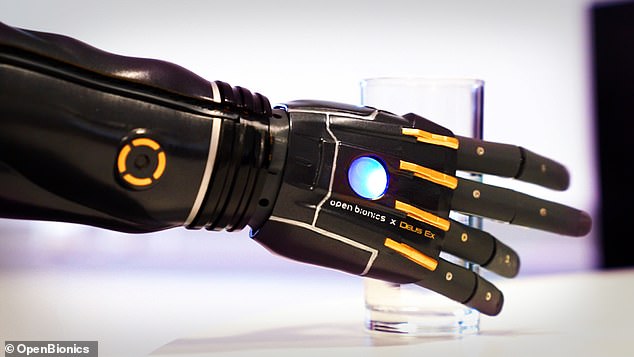 Mr Florence said: ‘I’ve always managed well with only one hand but when my son Joshua came along ago, I realised how much more I could do with two.

‘I’m incredibly excited. It’s going to make a massive difference in my life, and hopefully Joshua’s as well.’

Mr Florence was five when he contracted the potentially deadly meningococcal septicaemia.

The condition cause bacteria to enter the bloodstream and multiply, damaging the walls of the blood vessels. This can reduce blood flow to major organs.

It can lead to organ failure, skin and tissue damage and limb loss.

Mr Florence lost his right hand, three of the fingers on his left hand and both of his lower legs. But said he learnt to cope.

He, and his partner Danielle Lilley, had anticipated having issues with dexterous tasks like nappy changing and getting the baby dressed.

But they had not realised how much not doing these things would affect the bond with his son, who celebrates his first birthday on December 11.

The couple feared Ms Lilley would have to quit her job to care for Joshua full time because Mr Florence was unable to be alone with him.

Mr Florence relies on prosthetic legs, an electric wheelchair and help from friends and family to get about, but is hoping the new hand will help him take a more active role at home. 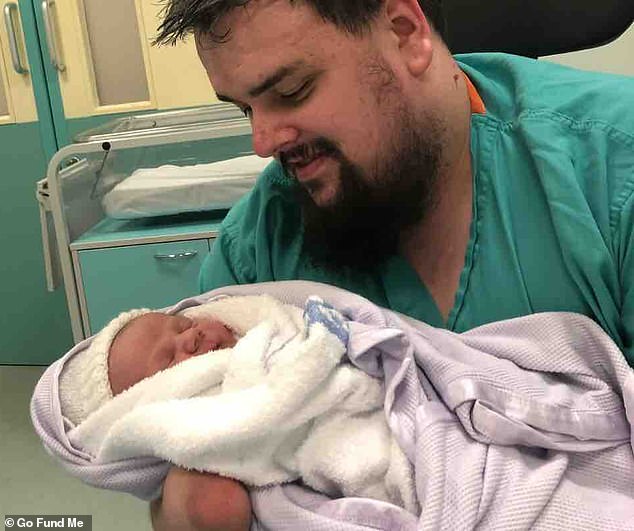 Mr Florence, who had Joshua with his partner Danielle Lilley, had anticipated having issues with dexterous tasks after the arrival of Joshua (pictured) 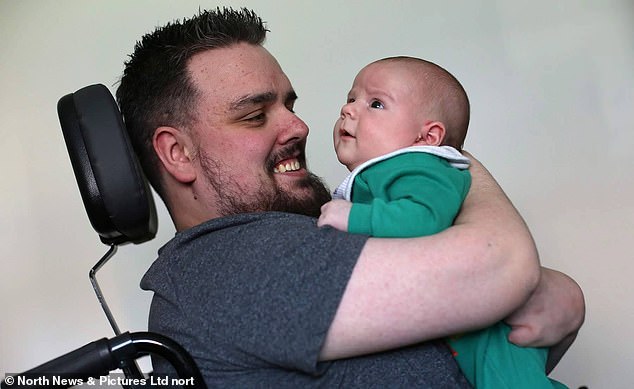 Mr Florence relies on prosthetic legs and an electric wheelchair to get about, but is hoping the new hand will help him take a more active role at home

He came across Open Bionics, based in Bristol, while researching online, and knew the Hero Arm would change his life ‘immeasurably’.

The Hero Arm contains electrodes which detect tiny electrical signals from the user’s muscles. These signals activate movements in the prosthetic.

It allows users to do every tasks such as brushing their hair, holding cutlery or pour water from a kettle.

Mr Florence launched a £10,000 GoFundMe appeal to be able to buy a bionic hand. But then, Maxon, which works with Open Bionics on the prosthetic, agreed to sponsor him.

The Atom Bank worker had a socket fitting in November and is due to get the new hand next week. He is hoping Joshua will be quick to adjust.

He said: ‘He loves my prosthetic legs, he gets all excited and laughs when I put them on and likes to touch them.

‘These days prosthetic designs look much better and all my nieces and nephews think I’m bionic!’

Despite not having used the muscles for 21 years, Mr Florence was amazed when he could use the hand at his first fitting.

He is now hoping to raise more awareness about the prosthesis, which he thinks should be available on the NHS.

The Hero Arm is only available privately at the moment, but Open Bionics say they are in close talks with NHS bosses to see if it will be funded in the future.

Mr Florence said: ‘This technology should be offered to everyone. This is life-changing, not only for the obvious physical side but mentally as well.

‘People who lose limbs can get very depressed, struggling with the ongoing pain and mourning the life they had before. They can even contemplate suicide.

‘This hand has such huge benefits, it should be available on the NHS and I want to help the cause to make that happen.’

He added: ‘I’d like to say thank you to Maxon as well as everyone who raised money. We had a huge amount of people come forward to help and all that money will be used to for the maintenance of the hand.’

HOW DOES THE HERO ARM WORK?

Open Bionics designs and manufactures the prosthetic limb, which uses an actuator, designed by Maxon.

An actuator is a mechanical device that can turn energy into movement. It helps wearers move each finger.

As muscles generate electrical signals when they contract, they create movement when connected to the electrodes in the prosthetic.

Each Hero Arm is custom-built using 3D printing and 3D scanning technologies, so that it fits the user perfectly.

It has six grip types, such as fist, hook, pinch and tripod, to allow for versatility. It is battery powered.

The companies ‘Hero Arm’ claims to be less than half the price of its nearest competitor, and can be fitted for amputees as young as nine years old.

The cost of the 3D bionic arms varies according to individual clinics.

But a spokeswoman for Open Bionics said they are ‘vastly cheaper’ than existing advanced alternatives that cost between £20,000 and £60,000 for one hand.