A father’s hilarious live tweeting of his day helping out on his daughter’s school trip quickly turned into one of the social media events of 2018.

In a bid to help his daughter’s teachers, Simon Smith volunteered to join her class on a trip to London’s Science Museum.

But what sounded like a nice day out quickly turned into a nightmare when he came face-to-face with the large group of ten-year-olds. Soon after he arrived at the primary school, he was assigned a group of children, one of whom called him ‘bruv’.

After a noisily embarking the coach, concerns about travel sickness were raised, before a group of boys started farting.

Mr Smith, a former serviceman from Harlow,Essex, tweeted: ‘Oh my God what are these boys eating.

‘We’re not even a third of the way into this journey and I’m ready to kick out a window and hurl myself onto the M25.’

After the group arrived at the museum, inane questions from some of his group begin.

Mr Smith was asked whether he had ‘pubes’, whether any of the astronauts who went to the moon ‘still live there’ and whether butterflies smoke marijuana.

He tweeted: ‘I’m fast learning that ten-year-olds get all their information from YouTube and quite a lot of it is b******s.’

‘Never again. Never, ever again,’ he tweeted at the end of the trip. ‘I’m shoving my own kid on eBay as soon as we get home.’ 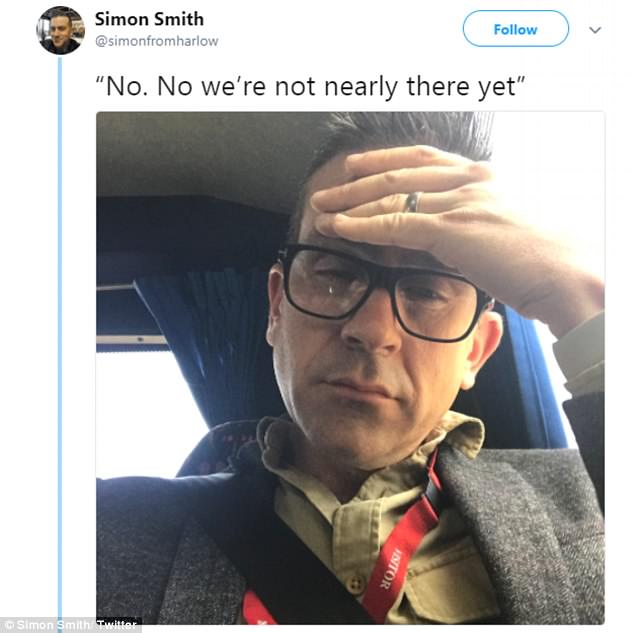 Mr Smith had optimistically bought his book, hoping he’d be able to read it on the coach

Scores of Twitter users wrote to Mr Smith following the tweets, which reportedly gained him more than 7,000 followers in a single day.

Ben Owen wrote: ‘Please please please if you have a spare 2 minutes take a read of @simonfromharlow’s feed from his school trip yesterday where he bravely assisted the school. It’s so funny I’ve nearly just choked on my chicken kebab!!!’

A mother added: ‘I’ve been there many a time . My favourite was when a group of girls lost their minds & had crying and hysterics about 100 yr old stuffed animals.

‘I was about to say FFS very loudly when a dad of daughters rescued me.’

A teacher added: ‘If you read nothing else look at this thread by @simonfromharlow as a parent chaperone on a schooltrip… as an ex primary school teacher I lived every moment’ 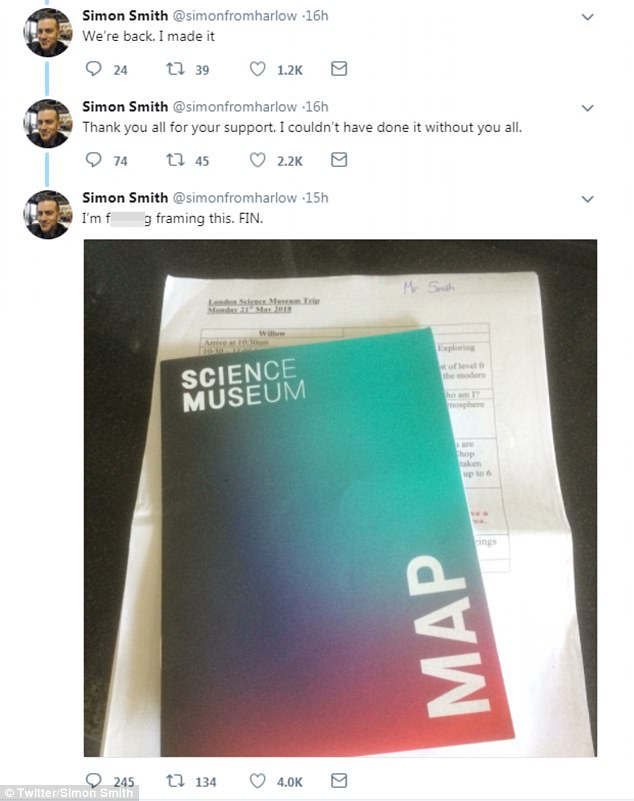 At the end of the day, he said he’s framing his museum map and putting his daughter on eBay