A father-of-eight says his burden has been lifted after surgeons removed a giant tumour hanging from his face.

Leon, 42, had suffered with the monstrous growth for years as it got progressively worse after he injured his face in a motorbike crash 15 years ago.

Unable to get medical attention Leon, a cocoa farmer in Cameroon, had left his face to heal naturally but the scarring grew out of control into a keloid tumour.

He says the tumour interfered with his ability to work, but he was relieved when a charity’s hospital ship docked near his home.

The volunteer plastic surgeon said it was one of the largest keloid tumours he had ever removed.

Leon, a cocoa farmer, developed a huge keloid tumour after injuring his face in a motorbike crash 15 years ago and not getting medical help for his wounds The tumour began to develop when, 15 years ago, Leon was on the back of a friend’s motorbike and they crashed.

The driver lost control as he swerved to avoid oncoming vehicles and the pair were thrown from the bike.

Hospital was closed so he left the wounds to heal naturally

The nearest hospital was closed and Leon couldn’t afford other treatment, so he left his injuries to heal without medical attention.

He counted himself lucky to have escaped with only flesh wounds around his jaw, but the untreated scar grew into a tumour that got heavier and larger as time went on.

Leon – who did not want to give his last name – says he was often cruelly mocked by people because of the condition, and found it hard to do his job properly.

Then a hospital ship from missionary charity Mercy Ships docked near his home, and volunteer surgeons operated to finally remove his growth.

‘A weight has been lifted’

Leon, who is married and has eight children said: ‘My younger children won’t recognise me – they’ve never seen me without my condition!

‘It’s like a weight has been lifted, and not just because of the physical tumour. My burden has been removed too.’ 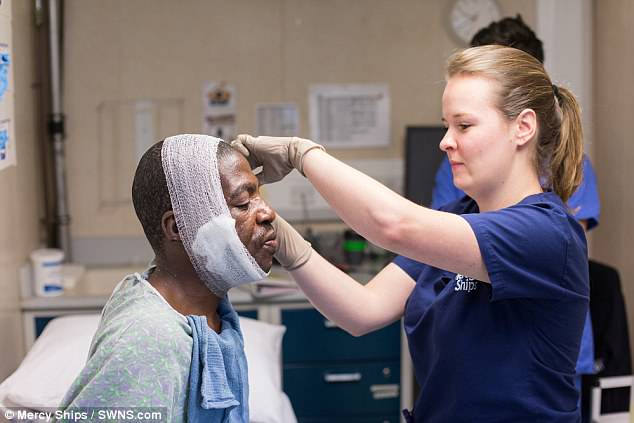 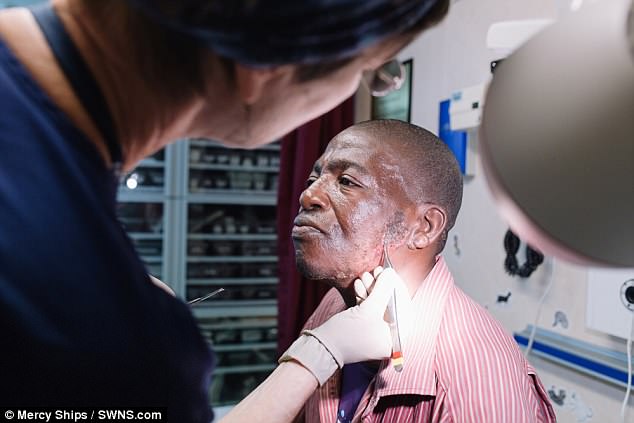 The medics removed the mass and performed a skin graft to patch up the remaining wound around Leon’s jaw.

Keloids are not contagious or cancerous

A keloid is a type of scar which grows lumpy and larger than the wound it has repaired.

During the normal scarring process collagen grows and gathers around a wound to help the skin heal itself.

However, for people who have a keloid scar the scar tissue does not stop growing and can turn into a growth.

Experts do not fully understand why keloids develop, but they are not contagious or cancerous. 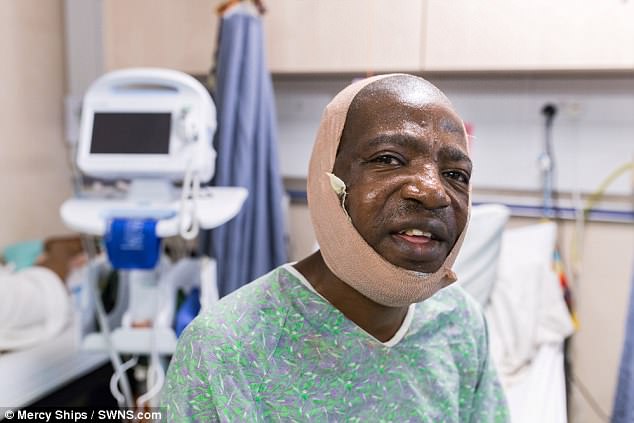 Leon, who is married and has eight children, said people used to mock him because of the growth on his face

They can take months or years to appear after the original injury, and may then last for years.

Leon’s condition was a particularly large scar that had developed into a large, obstructive growth.

Speaking before the op, he said: ‘There are certain things I just can’t do at work, like using a chainsaw. It’s just too uncomfortable for me.

‘It brings me down that I can’t do my job properly.’ 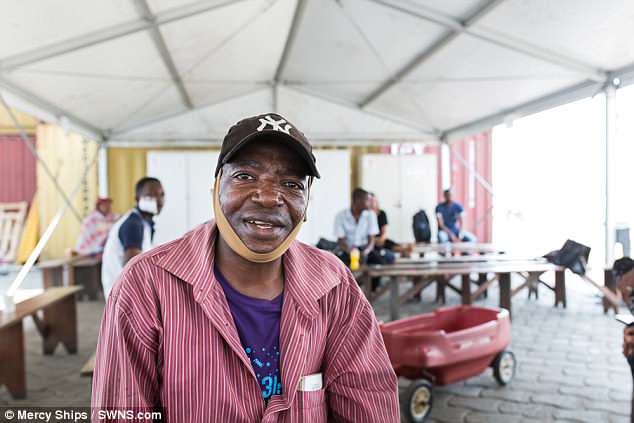 Leon said the tumour interfered with his ability to do his job as a cocoa farmer, and that it upset him because not many people empathised with him

One of the largest keloids the surgeon had seen

‘There are few people left that empathise with me anymore.

‘I am sad and not really living my life, but rather coping with life.’

The tumour was one of the largest keloid tumors the Mercy Ships volunteer plastic surgeon had operated on.

Mercy Ships was founded in 1978 and has worked in more than 70 countries.

The medical missionary charity sails to low income countries to give medical help to those who do not have access to good healthcare.