The top infectious disease expert in the United States has warned that now is not the time to back off even though hard-hit spots like New York are showing positive results in the battle against coronavirus.

Dr Anthony Fauci, a member of the White House coronavirus taskforce, said it was still too early to relax restrictions on Americans and they needed to be sure the US was heading in the right direction before opening the country again.

‘What we’re seeing right now is favorable signs,’ Fauci said in an interview on CNN on Friday.

‘We would want to see a clear indication that you were very, very clearly and strongly going in the right direction, because the one thing you don’t want to do is you don’t want to get out there prematurely and then wind up back in the same situation.

Dr Anthony Fauci, the  top infectious disease expert in the US, has warned that now is not the time to back off even though hard-hit spots like New York are showing positive results in the battle against coronavirus

Dr Fauci, who heads the National Institute of Allergy and Infectious Diseases, warned that if the US ‘prematurely’ ends social distancing measures ‘you’re right back in the same situation’.

‘The virus kind of decides whether or not it’s going to be appropriate to open,’ he said.

He said the number of new cases appeared to flattening the curve given hospitalizations and patients on ventilators in New York had decreased.

‘Obviously we’re looking for the kinds of things that would indicate that we can go forward in a gradual way to essentially reopen the country to a more normal way,’ Fauci said, adding that it depended on a number of factors.

The death toll in the US is currently more than 16,700 while the number of infections has increased to 469,000.

In New York, which is the epicenter of the US outbreak, there are currently more than 159,000 infections and 7,000 deaths.

The warning from Dr Fauci came as the Trump administration’s top economic officials said on Thursday they believe the US economy could start to reopen for normal business in May, despite health experts urging for continued social distancing measures to defeat the coronavirus.

President Donald Trump, who is seeking re-election in November, wants to get the economy going as soon as possible.

With many Americans celebrating the Easter holiday on Sunday, Dr Fauci said it was important to keep social distancing measures in place. 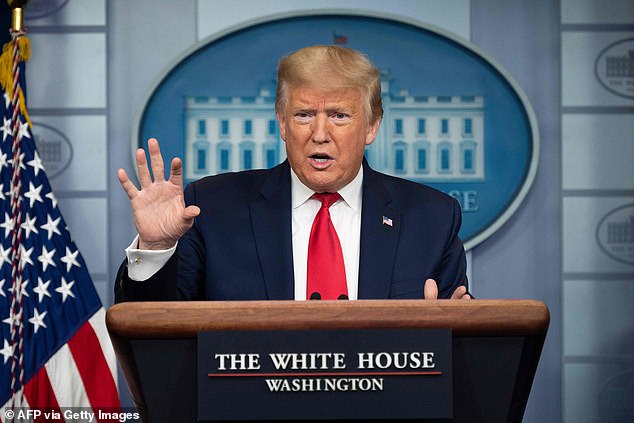 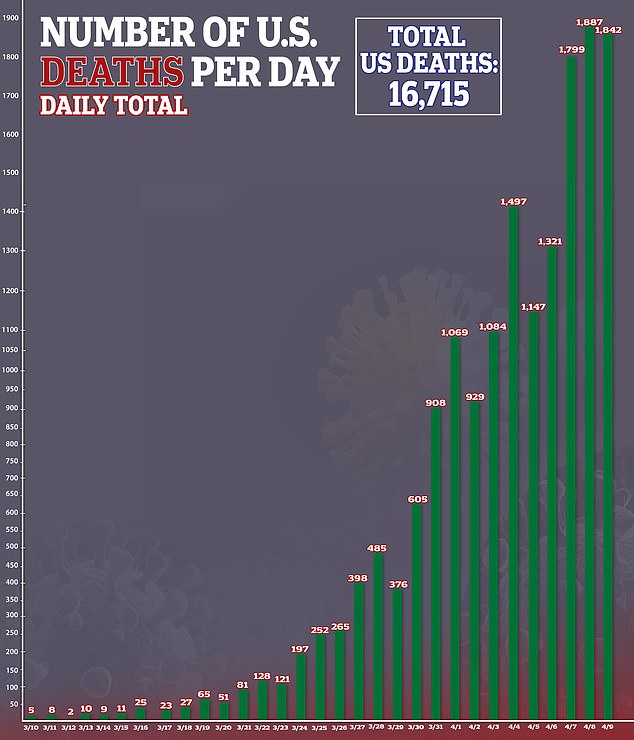 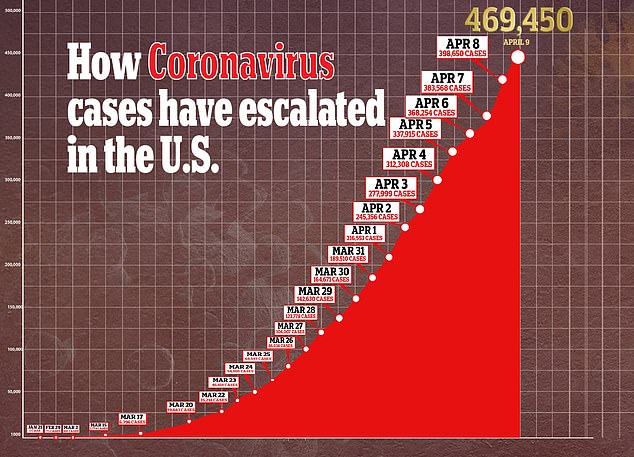 House of Representatives Speaker Nancy Pelosi also warned Trump against trying to get back to normal prematurely.

‘I would hope that the scientific community would weigh in and say, ‘You can’t do this, it is only going to make matters worse if you go out too soon,’ Pelosi said in an interview with Politico late on Thursday.

It comes as US Surgeon General Dr Jerome Adams said he agreed with Dr Fauci’s comments but added the areas that have had consistently low levels of positive coronavirus tests may be able to think about lifting lockdown restrictions come May 1.

He warned, however, that the majority of the US would have to remain on lockdown in order to defeat the coronavirus.

‘There are places around the country that have seen consistently low levels,’ Dr Adams told Fox News.

‘As we ramp up testing and can feel more confident that these places can actually do surveillance and can do public health follow ups, some places will be able to think about opening up on May 1.

‘Most of the country will not, to be honest with you, but some will and that’s how we’ll open the country – bit by bit, place by place, based on the data.’

Dr Adams said surveillance involves testing one in 100 or one in 50 people in order to keep track of emerging hotspots because it was not possible to test all 330 million Americans before reopening the country.

‘It is going to be a high bar to be able to say we can test 330 million people. We don’t do that for any other disease but we want to be able to test people who are at high risk and who have symptoms so we can follow up and contain it,’ he said.

‘We don’t close down cities for measles or tuberculosis, even though they’re both highly contagious. We figure out who has the disease, which communities are having outbreaks and we quickly put resources into those communities to be able to quell those outbreaks.

‘That’s what we’re talking about when we talk about having testing available.’ 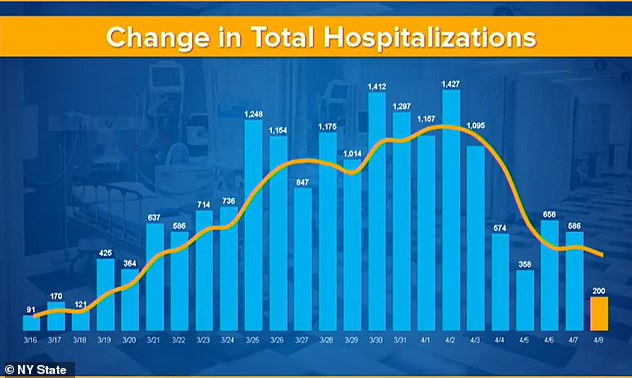 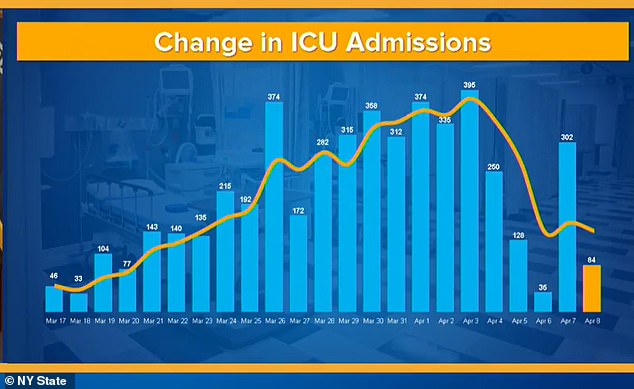 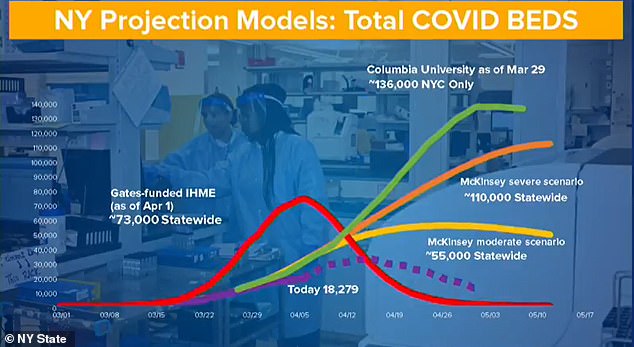 Even as death toll grows, New York hospitals hope fever is breaking with lower hospitalizations and supply of ventilators still in tact

New hospitalizations are the lowest they’ve been since the coronavirus crisis hit New York, the volume of 911 calls has fallen and ventilators remain in supply.

Even as the state reeled on Thursday from its deadliest day of the pandemic, health professionals and public officials saw signs they are averting the abyss they feared, of too many patients, too few beds, and doctors forced to choose who lives and dies.

‘There is a light at the end of the tunnel in terms of the volume of patients and how sick people are,’ said Dr Jolion McGreevy, medical director of Mount Sinai Hospital’s emergency department.

‘It’s getting better, but it´s not like it’s going to just drop off overnight. I think it´s going to continue to slowly decline over the next weeks and months.’

New York Gov. Andrew Cuomo on Thursday announced another 799 deaths from the virus, the third consecutive day of a record-breaking increase. The state’s death toll now stands at more than 7,000.

But hospital admissions across the state ticked up by a net of just 200 patients, down sharply from the crisis-high increase of 1,427 new patients on April 2. New intensive care admissions were also down. In all, about 18,000 people were hospitalized with the virus.

The tide of 911 calls overwhelming the city’s emergency response system has started to ease. Requests for ambulance service fell from a record 6,527 calls on March 30 to 5,017 on Wednesday – still far above normal but the lowest total in two weeks. 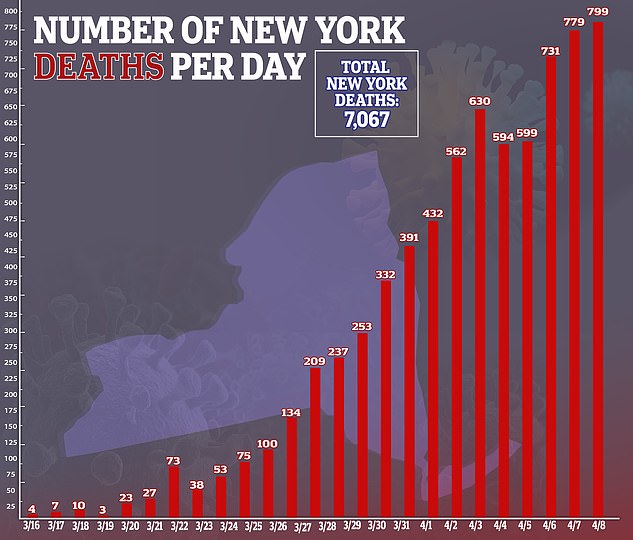 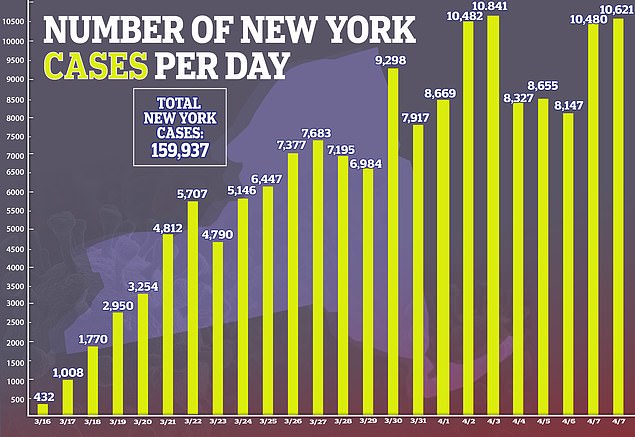 ‘Today we can say that we have lost many of our brothers and sisters, but we haven’t lost anyone because they couldn’t get the right and best health care that they could,’ Cuomo said.

In New York City, the once-desperate need for ventilators has eased a bit as new supplies pour in from around the globe.

China this week sent 1,000 ventilators to New York. California, Oregon and Washington lent its extra ventilators to the state and a Florida company shipped in 2,400 respiratory therapy machines that can be converted into ventilators.

At Long Island Jewish Medical Center in Queens, a chime is sounded each time a patient is discharged. More than 450 have gone home so far.

‘We are starting to see a slowing,’ Corwin said. But, he warned, ‘now is not the time to take our foot off the gas on social distancing measures.’

Cuomo and de Blasio both stressed Thursday that New York was not ‘out of the woods,’ urging people to keep isolating themselves indoors.

He noted that in other places, measures taken to control the spread of the virus have appeared to be working, only to have illnesses come roaring back.