WASHINGTON (AP) – Carolina is a long shot to make the playoffs. Coach Bill Peters is still looking for a strong finish for the Hurricanes.

Justin Faulk scored midway through the second period, and Carolina beat the Washington Capitals 4-1 on Friday night to remain in the postseason race.

It was the fourth win in five games for the Hurricanes, who haven’t made the playoffs since 2009. Carolina must win its final four games while Florida and New Jersey lose their remaining games in regulation to play beyond the regular season.

Asked if the playoffs were a realistic goal, Peters answered tersely: “No.” But Peters believes there are genuine incentives for his team.

Metropolitan Division-leading Washington had won five in a row. Michal Kempny scored his first goal with the Capitals after he was acquired in a February trade with Chicago.

“We’ve been playing great the last month,” Capitals forward Devante Smith-Pelly said. “I don’t want to say this was expected, but a game like this maybe was going to happen eventually. It was probably better tonight than Sunday.”

Washington visits Pittsburgh on Sunday, and the teams have a long history.

“Overall, obviously we don’t like those guys,” Smith-Pelly said. “It’s a huge game. We’ll be back.”

Kempny put the Capitals in front at 2:35 of the second, but Carolina’s Derek Ryan quickly responded. He beat Holtby for his 14th goal at 3:15.

“There’s pride on the line,” Ryan said. “We’re not quite in the playoff race. We’re not eliminated, but we realize where we’re at. We’re just continuing to play our game. We’re not thinking about it. We have four games, so we’re going to make those games count.”

Faulk’s eighth goal of the season put the Hurricanes ahead to stay at 11:43. It was Faulk’s first goal since he scored three times in a 7-3 victory over the Los Angeles Kings on Feb. 13.

NOTES: Trotz said he enjoyed the story of emergency goalie Scott Foster’s outstanding performance for Chicago on Thursday night. Trotz doesn’t know who the Capitals’ emergency goalies are. “I just know that we have them,” Trotz said. “Someone has a phone book with numbers. If you need a goalie, you start phoning. … I’d like to meet them, just not on our bench.” … Washington F Lars Eller played in his 600th career game. . Capitals F T.J. Oshie, who had an assist on Kempny’s goal, logged just 14 minutes of playing time, his lowest since Dec. 30. Trotz said Oshie was being checked for an injury, but wouldn’t comment on its specifics. … Carolina D Jaccob Slavin had two assists. 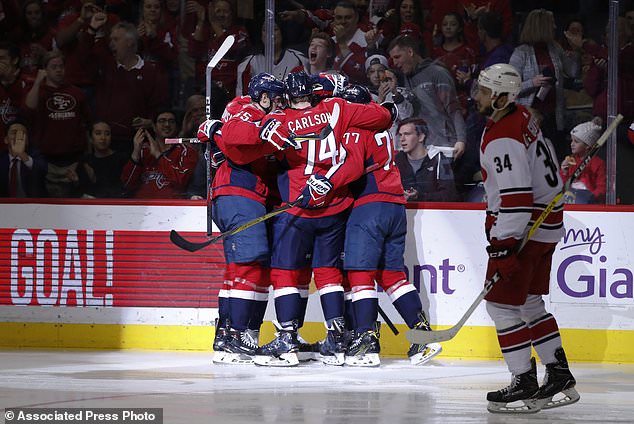