The first episode of the show’s ninth series, which aired on Sunday, saw Jenny Gifford, played by Ripley, removing her wig to reveal her bald scalp in a tear-jerking scene.

The character of Jenny received the shock breast cancer diagnosis during the last series and Ripley, 53, says she’s been inundated with people telling her that her character’s fight with the disease had prompted them to go and get themselves checked. 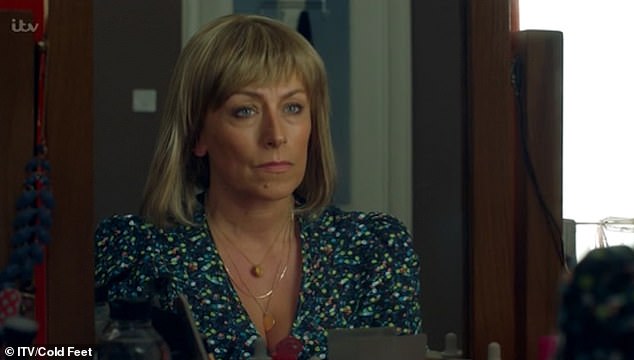 Tearjerker: The opening scene of the ninth series showed the character of Jenny Gifford sitting at her vanity table and removing her wig to show her thinning hair as a result of going through chemotherapy 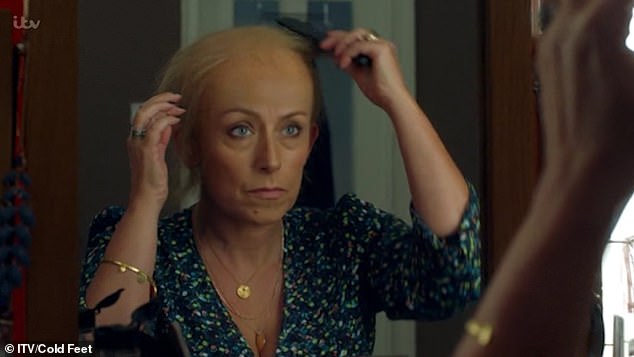 The emotional scene made a huge impact with viewers, with Ripley praised for her portrayal, she says the response to the storyline has been ‘mind-blowing’ 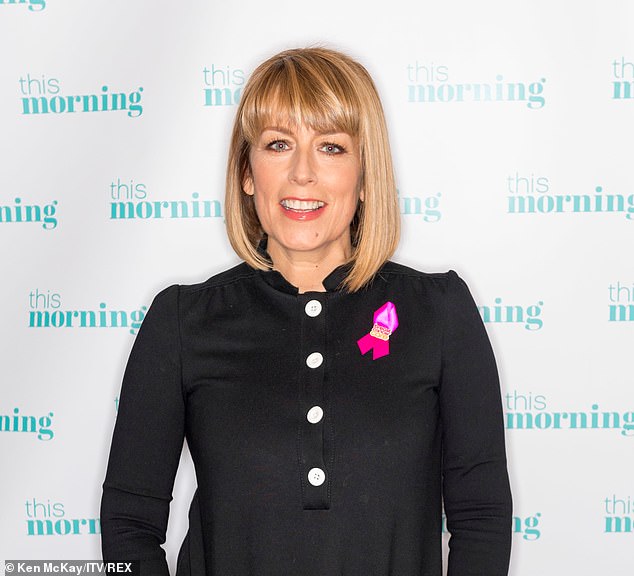 Cold Feet effect: Ripley told What’s on TV magazine that Jenny’s storyline had encouraged many women to check their breasts when they might not have done otherwise

Speaking to What’s on TV magazine, Ripley said that the response from viewers had been ‘mind-blowing’.

She said: ‘People rush up and say, ‘That happened to my mum, my sister, me, my dad…’

‘And I’ve had people texting me and coming up on the street saying, “I never checked myself before, but I checked and something been taken out”, It’s mind-blowing.’

The Cold Feet effect echoes the impact made by late reality television Jade Goody. Her death from cervical cancer, at the height of her career, in 2009. Immediately following her death, cervical cancer screening rose by around 70 per cent, the NHS reported at the time.

This week, viewers have taken to Twitter in their droves to praise Ripley for her emotional portrayal, to which she responded on Tuesday, saying: ‘To everyone who has sent messages. Thank you all for your amazing personal responses. And to those going through treatment. I bow to you. X’ 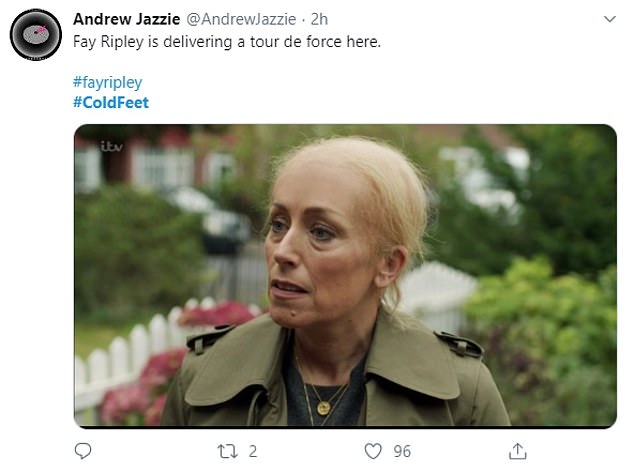 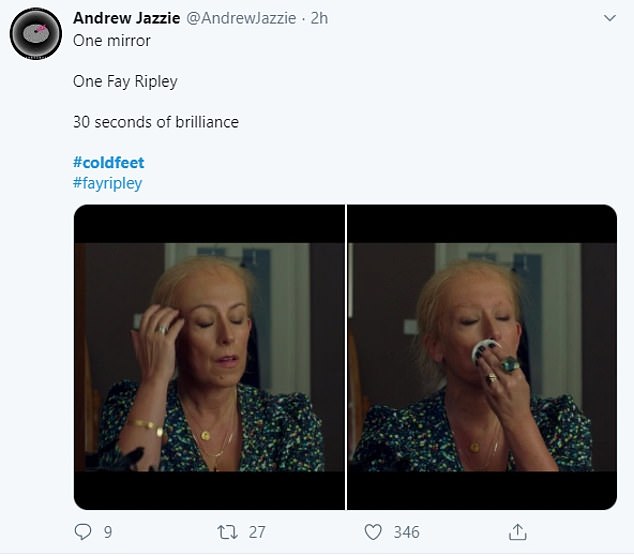 The opening scene showed Jenny sitting at her vanity table and removing her wig to show her thinning hair as a result of going through chemotherapy.

Emotional fans penned: ‘Fay Ripley is delivering a tour de force here.’; ‘That just broke my heart a little. #ColdFeet. Gorgeous performance from @FayRipley then’; ‘One mirror, One Fay Ripley, 30 seconds of brilliance’.

Elsewhere, others added: ‘Love #ColdFeet & love @FayRipley. We shouldn’t be shy of talking #cancer even if sometimes it can feel a bit too close to home…’; ‘Emotional performance by @FayRipley in #ColdFeet tonight. Fantastic job by all actors as always. Cold Feet is top of its game! 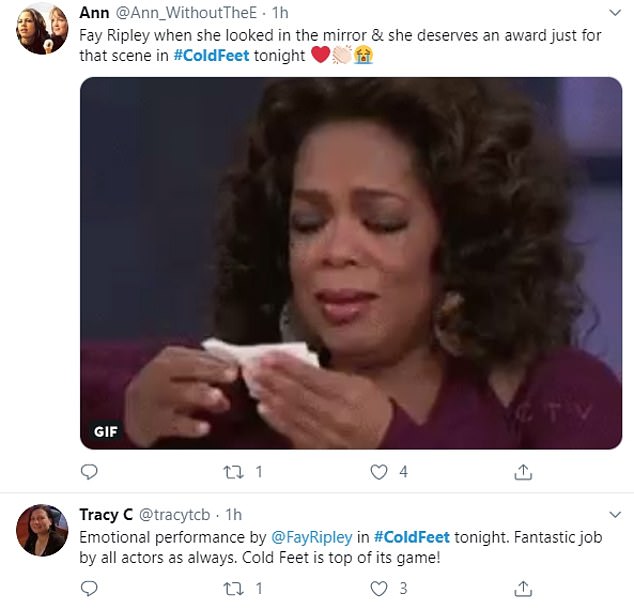 Heartbreaking: Viewers took to Twitter in their droves to praise the actress as she portrayed Jenny’s battle with breast cancer, after she received the shock diagnosis last series

Speaking to the Manchester Evening News about the storyline, Fay previously explained: ‘Sadly my preparation was that loads of my close friends and family have been through it. I was fully prepared I’m sorry to say.

‘Probably ten years ago I would have had to say, who do I know? But now there are loads of people I can ring and ask, what does this feel like? What does somebody do at this point?’

She added: ‘Jen’s journey is continuing, because as with real life, it doesn’t just end. When you’re in recovery there are other things that need to be done – the kids still need to go to school, the car goes in for a service, life goes on.’ 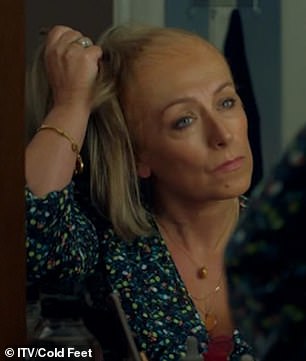 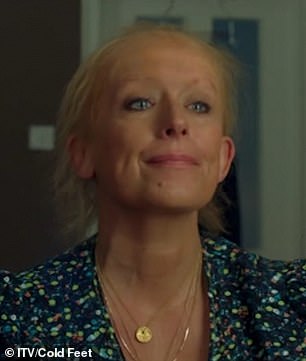 New side: Fay has been playing the hilariously blunt but fiercely loving Jenny since Cold Feet began in 1997, but fans have now seen a different side to her character 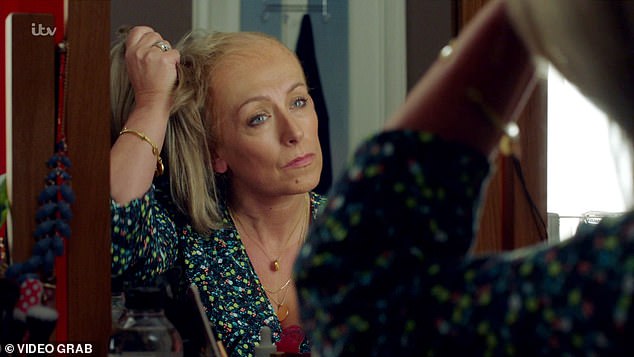 Fay has been playing the hilariously blunt but fiercely loving Jenny since Cold Feet began in 1997, but fans have now seen a different side to her character.

Speaking to The Mail On Sunday’s Event Magazine, she revealed: ‘Hundreds of people have told me they checked their own bodies after watching and wouldn’t have discovered what was going on with them if not for Jenny.

‘I’m no doctor, but I do think lives have been saved. That is brilliant, because most of the time as an actor, you feel like you are just a silly old clown.’

But fans of the show had better savour every moment, because writer Mike Bullen recently revealed this series may be the last, stating: ‘We are going to rest the series. We’re not doing one next year. I want to take a break.’

Cold Feet airs on Mondays at 9pm on ITV 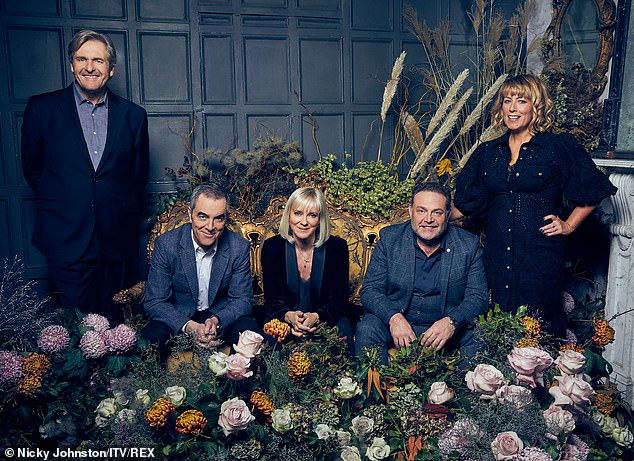 Coming to an end? Fans of the show had better savour every moment, because writer Mike Bullen recently revealed this series may be the last