Police investigating a drive-by shooting that killed Chicago rapper FBG Duck are trying to determine whether he was targeted for mocking deceased rival gang members in a recently released music video.

The 26-year-old artist, born Carlton Weekly, was shot dead in broad daylight in the high-end Gold Coast section of Chicago while shopping in boutiques with two friends, who were also injured in the attack.

Chicago Mayor Lori Lightfoot said that the assailants were able to track down Weekly because he had been livestreaming his travels through the city. 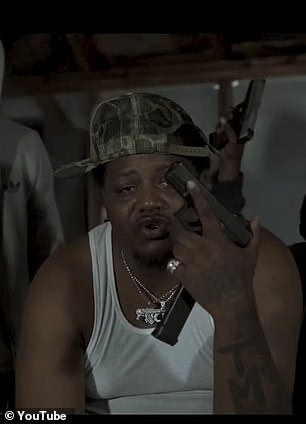 Police are investigating whether rapper FBG Duck was killed in Chicago on Tuesday after mocking dead gang rivals in a music video, believed to be his latest release, ‘Dead B****es’

The expletive-laden video, which was released three weeks ago, makes derogatory references to several deceased members of the Black Disciples gang

Chicago Tribune reported, citing unnamed sources, that Weekly was a member of a Gangster Disciples faction.

As evidenced by the initials ‘FBG’ in his stage name, Weekly was also part of the Fly Boy Gang, also known as Clout Boyz, which is a rap group from the South Side of Chicago affiliated with the Gangster Disciples.

Three weeks ago, Weekly released a music video for his song ‘Dead B****es,’ in which he made what police have characterized as ‘derogatory statements’ about members of the rival Black Disciples gang who have died.

Specifically, one section of the expletive-laden video includes the lyrics: ‘Said I wasn’t gon’ diss the dead and okay, I did it. But n****, f*** T-Roy and Odee, them dead b****es.’

The name ‘Odee’ in the song refers to Odee Perry, a 20-year-old member of the Black Disciples who was shot dead in 2011, just months after the killing of Gangster Disciples member Shondale ‘Tooka’ Gregory, 15.

Gregory was close friends with Gakirah Barnes, then aged 13, who later became known as one of the most notorious female gang members in US history. 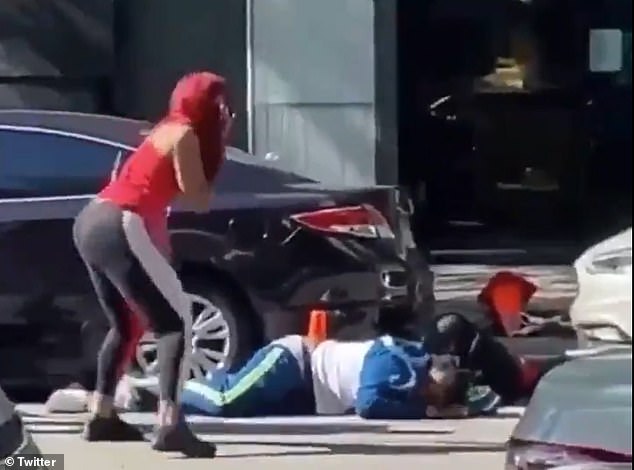 A woman looks on with horror at two men who were struck in the shooting. One of them, the rapper FBG Duck, did not survive his injuries and was pronounced dead on arrival

Barnes, who was believed to have murdered as many as 20 people before being shot dead at age 17 in 2014, was linked to Perry’s killing but was never charged with the crime.

The Black Disciples gang later named one of its factions O-Block after Odee Perry, and their rivals dubbed a faction of Gangster Disciples ‘Tookvaille’ in Gregory honor.

Weekly, who was in his teens when Perry and Gregory were killed nearly a decade ago, would later join the Tookaville faction.

The other name invoked in his rap, ‘T-Roy,’ purportedly refers to James ‘T-Roy’ Johnson, an alleged member of the O-Block faction of the Black Disciples who was fatally shot in the chest on his way to a store on the South Side of Chicago in February 2017.

Mayor Lightfoot confirmed that Weekly’s gang has long been locked in a feud with a rival gang. 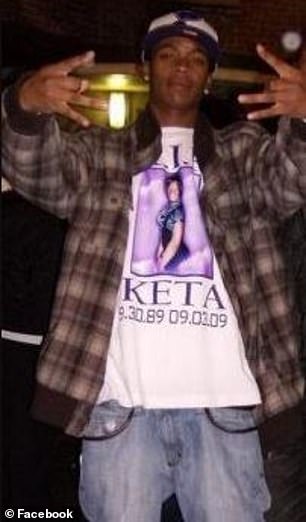 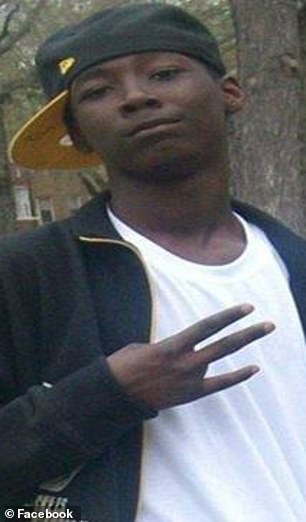 In her remarks, she described Weekly, who had 372,000 followers on Instagram and whose music videos have drawn millions of views, as ‘an individual who fancies himself a rapper but is also a member of a gang.’

As of Wednesday afternoon, his latest music video for ‘Dead B****es’ has been viewed more than 3million times. 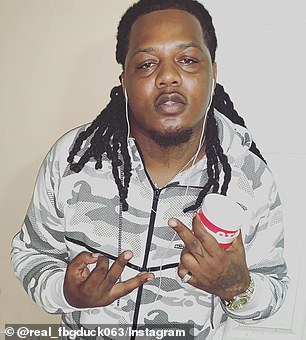 FBG Duck, born Carlton D. Weekly, was a member of the Tookaville faction of the Gangster Disciples, named after Gregroy

The Tribune reported that police officers in at least four Chicago precincts have received an advisory warning them to use ‘extreme caution’ because of the ‘high probability of further violence’ in the wake of Weekly’s death.

‘Intelligence suggests that both these gangs are in possession of large caliber and high capacity firearms,’ the notice stated.

Police said Weekly and two friends were shopping on East Oak Street, near Chicago’s storied Magnificent Mile, at 4.37pm when two cars pulled up, four people got out and opened fire on the group, before fleeing the scene.

Weekly was transported to Northwestern Memorial Hospital where he was pronounced dead. He was identified as the deceased victim by police radio traffic and family members on social media.

A 36-year-old man and a 28-year-old woman were also taken to area hospitals, and both were in a serious condition, police said.

Shocking video from the scene appears to show Weekly and the other members of his entourage following the shooting, with two men seen sprawled in the street with injuries. 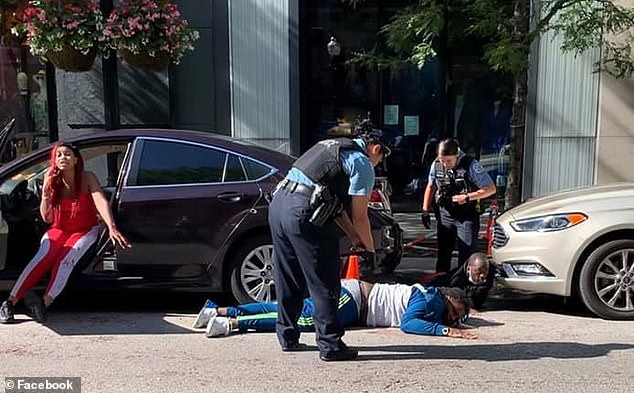 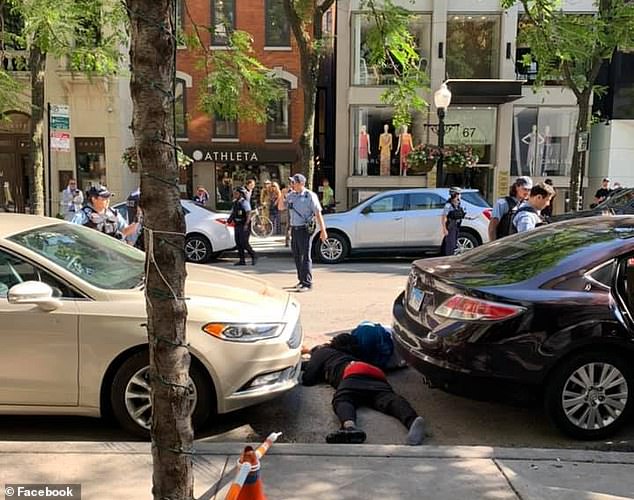 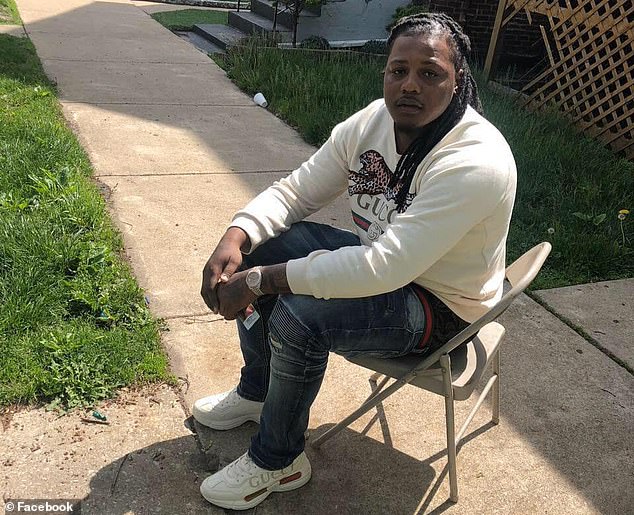 Weekly, 26, was a popular figure in the underground Chicago rap scene and was best known for his single Slide

Who was FBG Duck?

Most FBG members are reportedly affiliated with the Gangster Disciples faction known as Tooka Gang.

Duck, whose real name was Carlton Weekly, was a popular figure in the underground Chicago rap scene and was best known for his single Slide.

His other songs include Face, Do it Like Me, Look at Me, and Feeling Myself.

Police say the four gunmen fled the scene in two vehicles, a black Ford Taurus and a silver Chrysler 300M.

Both vehicles fled westbound on Oak Street, and no suspects are in custody.

It is just the latest incident of violence to rock Chicago, which has seen murders soar by 152 percent and shootings rise 62 percent in the past four weeks, compared with the same time period last year, according to Chicago Police Department data.

Still, the shooting came as a shock on the upscale Gold Coast block lined with boutique shops, just off Michigan Avenue, where violence is usually rare.

The epicenters of recent violence in Chicago have been mainly away from the downtown core on the city’s South and West Sides, where gang rivalries are more common.

Weekly was reportedly affiliated with the Tooka Gang, a reputed faction of the Gangster Disciples.

He had ongoing feuds with numerous other Chicago rappers affiliated with rival gangs, and had released ‘dis tracks’ insulting several of them.

Weekly also had prior brushes with violence. He was reportedly once stabbed in the stomach by an ex-girlfriend, and in 2018, he was shot in the shoulder.

In 2017, the rapper’s brother FBG Brick, born Jermaine Robinson, was shot and killed on Chicago’s South Side.

As in other major cities, violence in Chicago has soared since late May, with shooting incidents and murders up dramatically.

From January 1 through the end of July, there were 440 homicides in Chicago and 2,240 people were shot, a number that includes those killed, according to the Chicago Police Department.

That compares to 290 homicides and 1,480 shootings in Chicago in the same period last year, and is nearly as many homicides as the entire year of 2019.

July was especially violent; the city recorded 105 homicides and 584 shootings. 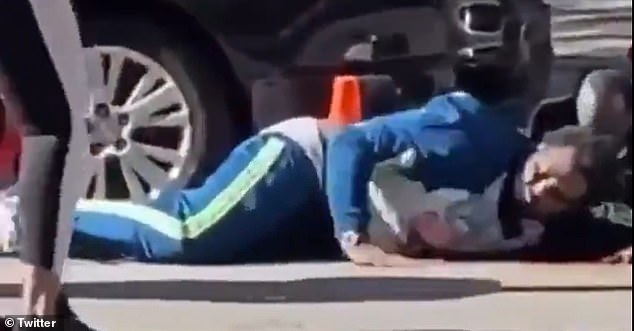 Shocking images from the scene show Weekly clinging to life following the shooting. He died before reaching a hospital 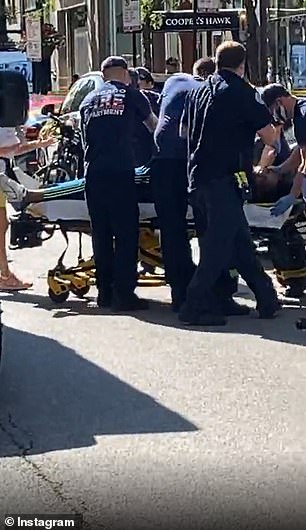 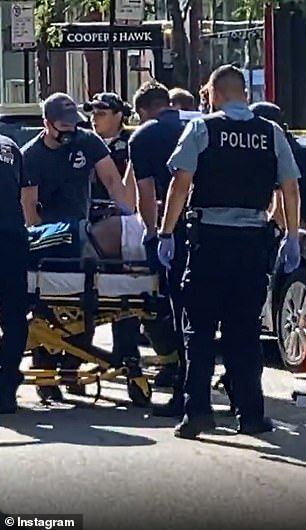 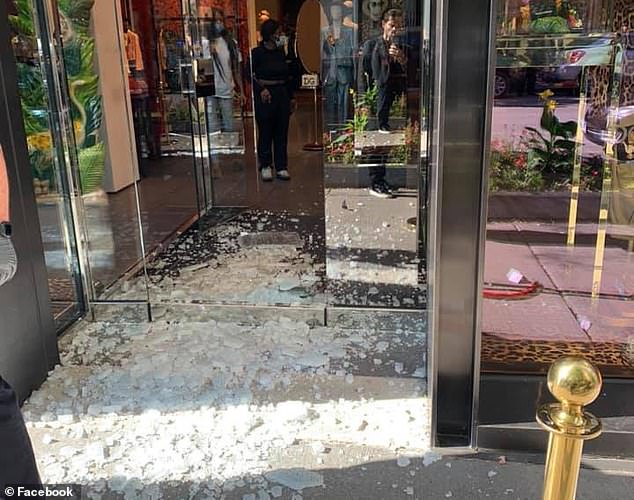 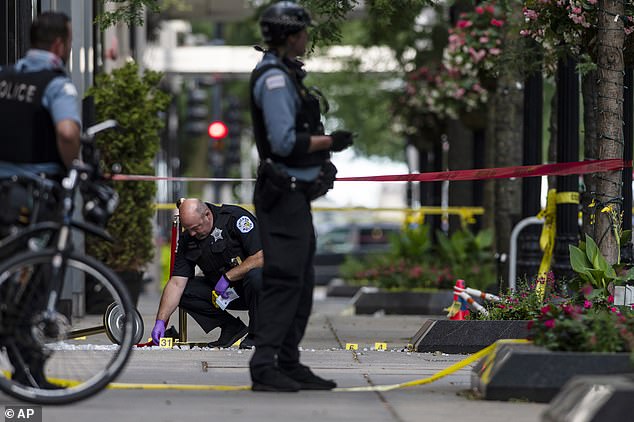 Chicago police investigate the scene where three people were shot, one of them fatally, in the Gold Coast neighborhood 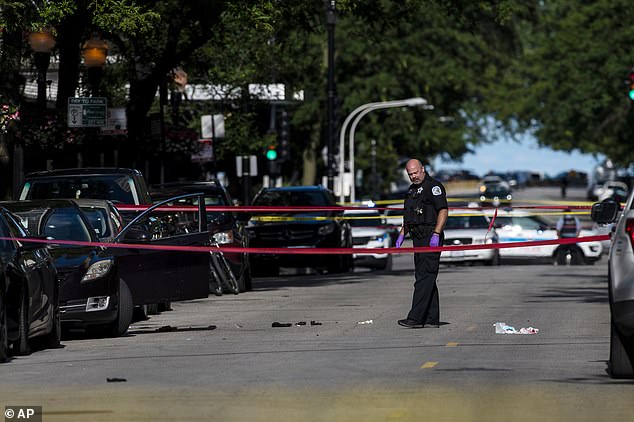 Last weekend, eight people were killed in Chicago, including a nine-year-old boy, and at least 19 other people were wounded.

President Donald Trump recently announced he was sending federal agents to some cities, including Chicago, as part of what he calls Operation Legend to help local authorities fight such crime.

Mayor Lightfoot reacted with bitter opposition after Trump announced his plan to send federal agents to the Windy City.

‘Under no circumstances will I allow Donald Trump’s troops to come to Chicago and terrorize our residents,’ Lightfoot said in reaction to the plan.

At midnight on Tuesday, Lightfoot had not yet publicly commented on Weekly’s shooting death. The mayor’s most recent tweet was a solicitation for online signatures on her birthday card. She turned 58 on Tuesday. 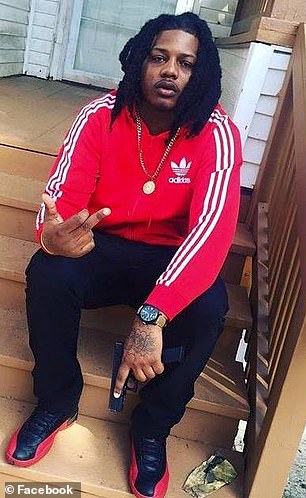 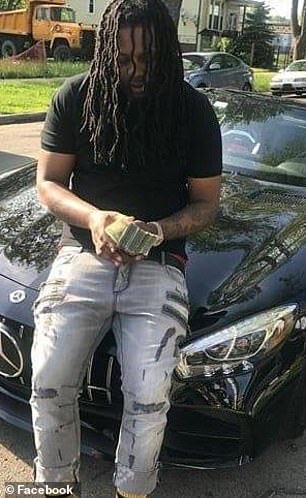 Weekly (left and right) was reportedly affiliated with the Tooka Gang, previously known as the Gangster Disciples 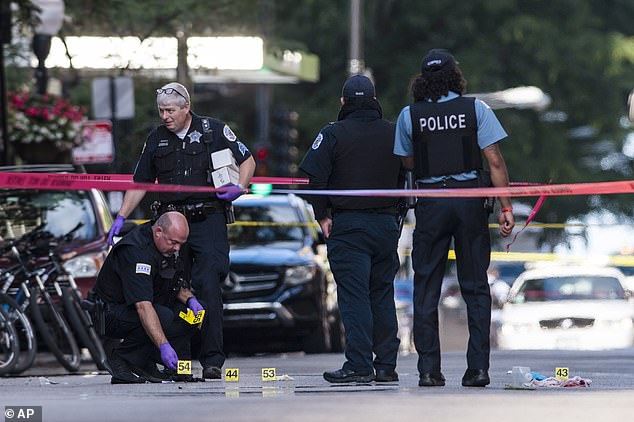 Chicago police investigate the scene where three people were shot, one of them fatally, on Saturday 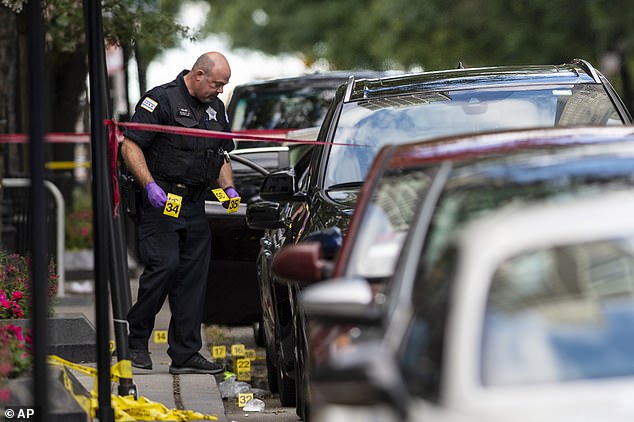 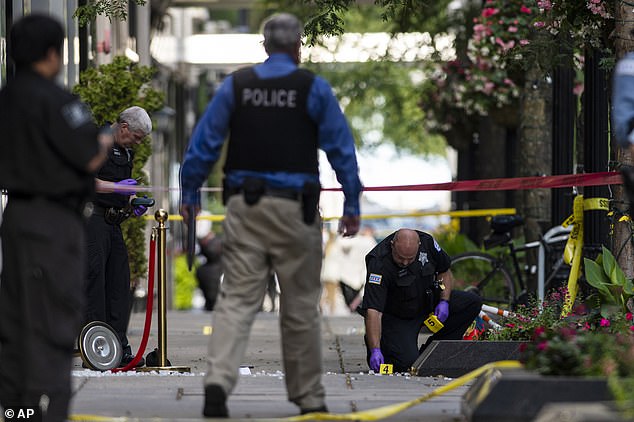 The shooting occurred in the Gold Coast district, an upscale area popular with tourists near the Magnificent Mile 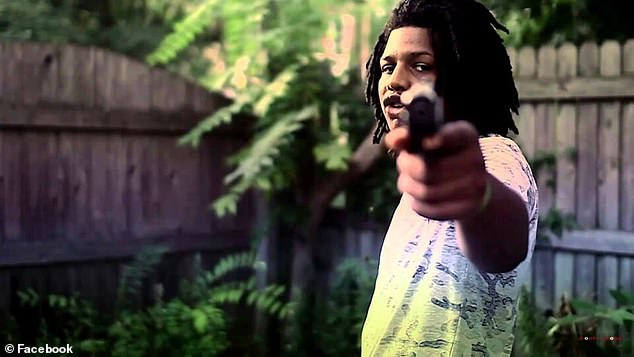 Weekly (above) had ongoing feuds with numerous other Chicago rappers affiliated with rival gangs, and had released ‘dis tracks’ insulting several of them

Despite Lightfoot’s threats, federal agents have been dispatched to Chicago, including an ATF ballistics team to assist with shooting investigations.

Although federal agents in Chicago are primarily assisting police in investigating violent crime, an ATF agent intervened when he saw an attempted carjacking on Friday, firing on the suspect.

An ATF spokeswoman said the agent, a regular full-time Chicago Field Division staffer who is not part of Operation Legend, did not wound anyone and the suspect or suspects got away.

ATF’s Office of Professional Responsibility is conducting a use-of-force investigation, and Chicago police are handling the carjacking probe, the spokeswoman said.

Anyone with information about the shooting is urged to call Cook County Crime Stoppers anonymously for a potential cash reward at 1-800-535-7867.