The FBI’s probe into allegations of sex attacks by Brett Kavanaugh is under fire from his accusers, with Christine Ford’s attorneys revealing she and witnesses she has offered have not been spoken to.

The ‘background investigation’ also came under fire from attorneys from Kavanaugh’s other two accusers.

‘It is inconceivable that the FBI could conduct a thorough investigation of Dr. Ford’s allegations without interviewing her, Judge Kavanaugh, or the witnesses we have identified in our letters to you,’ Ford’s attorneys Debra Katz and Michael Bromwich wrote to the FBI’s director, Christopher Wray.

John Clune, a lawyer for Debbie Ramirez, the second accuser, who was questioned at the weekend, also attacked, telling Bloomberg: ‘We have great concern that the FBI is not conducting – or not being permitted to conduct – a serious investigation.’

A list of witnesses Ramirez presented does not appear to have been acted on, Clune said.

And Michael Avenatti, who represents the third accuser, Julie Swetnick, published emails he had sent to the Senate Judiciary Committee demanding that it  ‘take all steps to arrange an FBI interview’ with her.

Agents have spoken to at least four people involved in the allegations.

One of those is Mark Judge, the high school friend of Kavanaugh who was accused of being in the room when the nominee allegedly tried to rape Ford, while the other is Debbie Ramirez, the second accuser.

They have also spoken to Patrick ‘P.J.’ Smyth and Leland Keyser, both of whom Ford said were present, and to Tim Gaudette, whose home Kavanaugh’s calendars showed he partied at on July 1, 1982.

That led to speculation that the FBI probe could end as soon as Wednesday, which came as Senate Majority Leader Mitch McConnell said there would be a vote on Kavanaugh’s nomination this week.

The FBI had been given a deadline of Friday to end its new background investigation.

However the possibility of the investigation coming to an end immediately led to the prospect of a series of new rows – over the release of the report, how senators are presented with it, and crucially, exactly who was questioned. 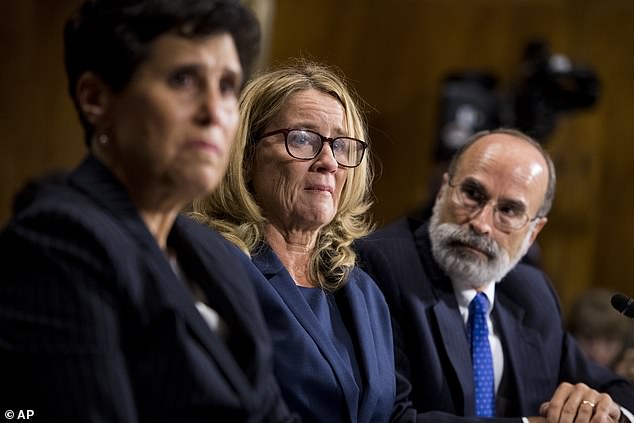 Why hasn’t she been asked: Christine Blasey Ford’s attorneys Debra Katz and Michael Bromwich wrote to the FBI warning she had not been contacted at all 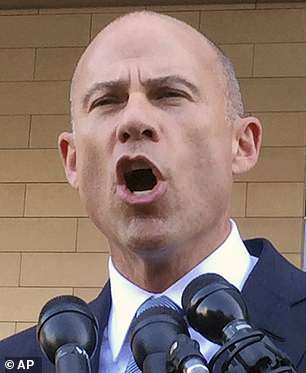 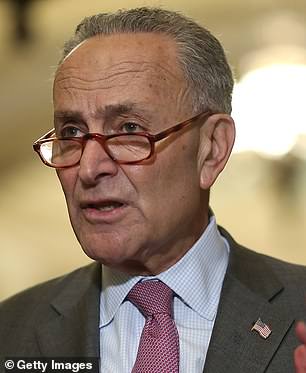 Ready for a confrontation: Michael Avenatti, the attorney for third accuser Julie Swetnick, said she had not been contacted by the FBI, while Chuck Schumer, the Senate Minority Leader made clear Tuesday he wanted to see the FBI’s results published in full

McConnell created dissent within his own party by saying that only senators would see the FBI’s report.

But both John Cornyn, the second-most powerful Republican in the Senate, and South Carolina senator Lindsey Graham, who made himself a viral hero to conservatives with a fiery attack on Democrats over Kavanaugh, said that the public needed to get at least a sense of its contents.

Schumer also set up a confrontation with McConnell by saying he wanted senators to be briefed by the lead FBI agent before they voted.’

‘We need to be briefed by the FBI. By the agent in charge,’ Schumer told CNN.

But the largest dispute of all – and the biggest political risk for McConnell – is over exactly who agents questioned.

The public perception of the scale and scope of the FBI probe is now the key for Republicans wanting to get Kavanaugh nominated.

All five have said that the FBI investigation must be adequate before they decide how to vote.

Collins has said publicly that Swetnick needs to be questioned for her to vote ‘yes’.

Public questions over whether agents failed to investigate fully could lead to at least two of them voting Kavanaugh down, which would force a tie-break, while if three vote against, he is doomed.

Murkowski said she was not worried that McConnell was moving too fast on the nomination by promising a floor vote this week. 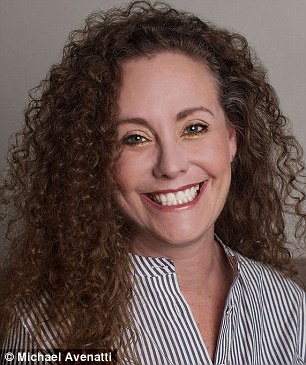 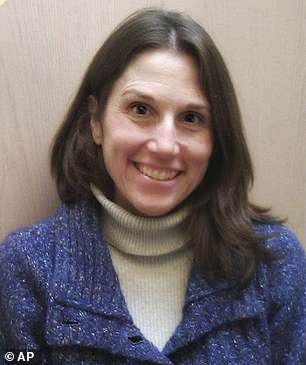 Concerns: Attorneys for accusers Julie Swetnick and Debbie Ramirez have both said they are unhappy with the Senate Judiciary Committee and the FBI. Ramirez was questioned by agents  but her attorney said her list of witnesses has not been acted on. Swetnick has not been contacted by the FBI. 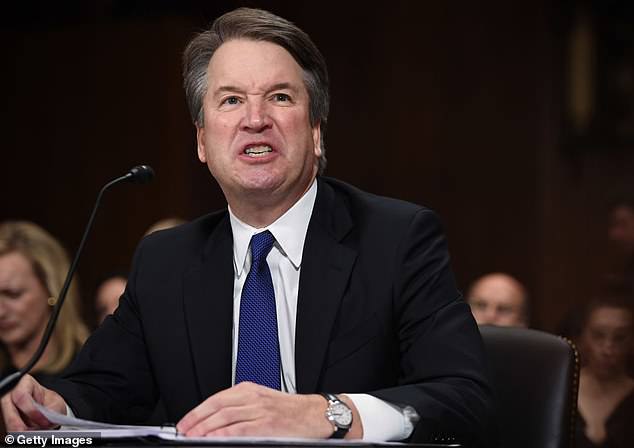 FBI investigators are probing Kavanaugh accusers. It is unclear the extent to which they may run down allegations of excessive drinking in high school and college

Asked about McConnell’s pledge to move forward with the vote, Murkowski told The Associated Press that McConnell ‘talked about a vote a last week, too.’

Collins was riding with Murkowski on an underground Senate train when the question was asked, and smiled and told her colleague: ‘Good answer.’

Murkowski and Collins both said they were satisfied with the scope and pace of the FBI’s probe.

However Flake said that he wanted a full investigation, while Manchin and Heitkamp did not pass comment Tuesday.

McConnell himself attacked Democrats for pursuing the ‘politics of personal destruction’ in a fiery floor speech where he insisted the Senate would vote ‘this week’ on the embattled judge.

‘I wish this fight could have remained in the realm of normalcy,’ McConnell said, as FBI agents continued to probe sexual assault allegations against the Supreme Court nominee.

‘Some chose a darker road. The politics of personal destruction were willfully unleashed,’ McConnell said, aiming his fire at Democrats he accused of repeatedly ‘moving the goalposts’ to kill the nomination.

‘The Democrats may be trying to move the goal posts every five minutes but their goal has not moved an inch. They will not be satisfied unless they have brought down Brett Kavanaugh’s nomination,’ said McConnell.

McConnell, who successfully kept Judge Merrick Garland from getting a hearing during the Obama administration of ‘delay, delay, delay.’

‘Who are we kidding, shot back Sen. Minority Leader Charles Schumer.

‘I want to ask the leader to answer a direct question: does he believe or not believe Dr. Ford, yes or no,’ said Schumer, referencing accuser Christine Blasey Ford.

Schumer fumed in an angry response to McConnell delivered on the floor: ‘What a double standard. How galling.

‘Accusing Democrats of needlessly delaying a Supreme Court nomination is galling, is hypocritical coming from a leader who delayed the nomination of a Supreme Court justice for over 300 days until his party had a chance to win the White House.

‘So no one, no American should accept his admonishments about delay. He’s the master of delay,’ he added.

‘A tabloid lawyer organized a red carpet rollout for someone who wanted to accuse Judge Kavanaugh of masterminding some kind of high school drug and serial sexual assault ring,’ said McConnell.

‘This is how desperate some became,’ said McConnell.

is planning procedural steps that could set up a vote on confirming Brett Kavanaugh to the Supreme Court on Sunday – but an ongoing FBI investigation could throw off the timing.

His latest strategy is to move to end debate midweek, which would set up a vote to cut off debate on the Kavanaugh nomination on Friday. That in turn would set up a potential Sunday confirmation vote.

‘But that timetable means the FBI investigation must be complete by Wednesday, and that’s where the situation becomes dicey for McConnell,’ Politico reported.

The FBI was on track to quickly wrap up its probe under initial direction to interview just four witnesses. But the latest direction, after an outcry from Democrats and a few Republicans, instructed agents to follow the leads they deem fit.

NBC had reported the FBI was authorized only to query only four people: witnesses to the alleged assault by Christine Blasey Ford, Ford herself, and fellow accuser Deborah Ramirez, under arrangements also made with the Senate Judiciary Committee.

The others were Kavanaugh friend Mark Judge and P.J. Smyth, as well as Ford friend Leland Keyser, who Ford says attended the party where Kavanaugh allegedly assaulted her.

But Collins was among those arguing the FBI should be allowed to interview a third Kavanaugh accuser, Julie Swetnick, who is represented by Stormy Daniels attorney Michael Avenatti, and who claims Kavanaugh was present during a gang rape at a house party.

Under an agreement reached with Flake and other holdouts, the White House gave the FBI instruction to complete its investigation by the end of the week. If the FBI does not finish its probe by Wednesday, McConnell and GOP leaders are likely to hold off until it is completed.

As before, a key vote is Sen. Susan Collins of Maine.

Her spokeswoman, Annie Clark, said Collins, Sen. Jeff Flake, and Sen. Lisa Murkowski ‘advocated for the additional background investigation because she believed that it could help the senators evaluate the claims that have been brought to the Judiciary Committee,’

‘That would include the allegations that were brought by Julie Swetnick,’ she told the Portland Press Herald. 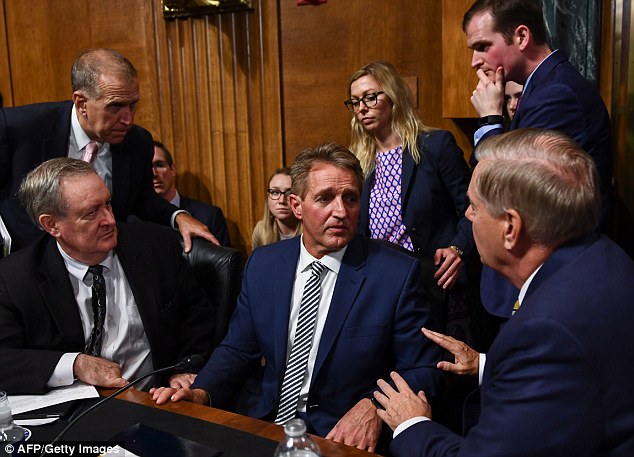 Senate Judiciary Committee member Senator Jeff Flake (R-AZ) (C) speaks with colleagues after a hearing on Capitol Hill in Washington, DC on September 28, 2018, on the nomination of Brett M. Kavanaugh to be an associate justice of the Supreme Court of the United States

FBI investigators ‘can determine whom they need to speak with and should follow appropriate leads. Senator Collins was encouraged by the President’s statements that he would give the FBI agents the latitude they need to do their work. It makes sense to start with the four named witnesses from the hearing and then the FBI can follow any leads that it believes need to be pursued, as Senators Flake, Murkowski, and Collins indicated at the time this agreement was made,’ Clark said.

McConnell’s more deliberative pace is a departure from late September – after Ford’s bombshell allegations emerged. Kavanaugh has strongly denied them.

‘In the very near future, Judge Kavanaugh will be on the United States Supreme Court,’ McConnell vowed at a Value Voters Summit . ‘So my friends, keep the faith, don’t get rattled by all of this. We’re going to plow right through it and do our job,’ he said.

Campaigning in first-in-the-nation primary state New Hampshire, Flake got asked what would cause him to oppose Kavanaugh. He responded by pointing to ‘any evidence that corroborates’ assault allegations, MyChamplainValley.com reported.

‘Any nominee that lies to the committee, that is disqualifying,’ Flake added.

He also has called for a thorough investigation. ‘It does us no good to have an investigation that just gives us more cover,’ he told a Forbes summit.