FBI called in as ‘thieves steal $300,000 in cash from JFK Airport in raid on armored car shipment’

More than $300,000 in cash has vanished from JFK Airport in an apparent raid on an armored car shipment, it has been reported.

The missing money was part of a larger cash delivery set to arrive at the New York airport on Wednesday ahead of being loaded onto a Delta flight to Florida.

Law enforcement officials said it is unknown whether the cash was stolen by thieves prior to its arrival at JFK, or if it disappeared after it was loaded into the airport.

A Port Authority of New York and New Jersey spokeswoman told NBC New York that the apparent heist is now being investigated by the FBI.

The missing $300,000 was part of a larger cash delivery from a car company set to be loaded onto a Delta flight from JFK Airport (pictured) to Florida on Wednesday

Police also confirmed there are no suspects at this time, and said it is unclear exactly what happened to the cash.

A law enforcement source told the New York Post that now must be ‘hard times’ for thieves targeting JFK Airport, because $300,000 is ‘chump change’.

The apparent theft is far from the first time significant sums of money have vanished from the city’s airport.

On December 11, 1978, six masked gunman stole $5 million in cash and $1 million in jewelry from the Lufthansa Terminal at JFK Aiport. 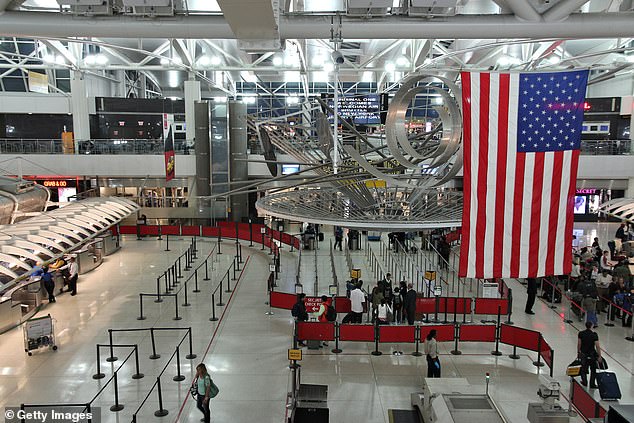 Law enforcement officials said it is currently unknown whether the cash was stolen by thieves prior to arrival, or after it was loaded into the airport (stock image)

It took the gang – which was linked to the Lucchese crime family – 64 minutes to steal the packets of cash, toss them into a van and escape.

At the time, it was the biggest cash heist ever in the United States. The stolen $5 million would be worth $17.9 million in 2013 dollars, according to the Bureau of Labor Statistics.

The crime stumped investigators for years, but a break in the case came in 2013 during a search that turned up human remains buried at the former home of James ‘Jimmy the Gent’ Burke.

After 30 years, the FBI were finally able to charge members of the New York mafia with the heist at JFK – which was made famous by the movie Goodfellas.