A portion of the document formerly classified as ‘Top Secret’ has now been revealed.

‘From a national security perspective, Comey said he does have some concerns that incoming NSA Flynn is speaking frequently with Russian Ambassador Kislyak,’ Rice wrote about the January 5, 2017 meeting.

Comey’s response was that was ‘potentially the case.’ According to Fox News, Comey continued that there weren’t indications Flynn passed on classified information to the Russina ambassador, but noted  ‘the level of communication is unusual.’ 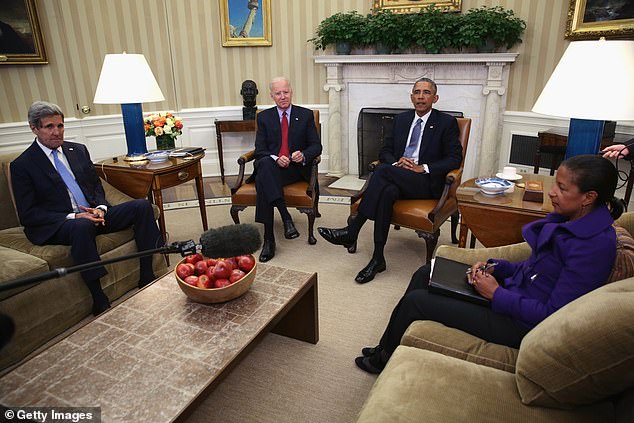 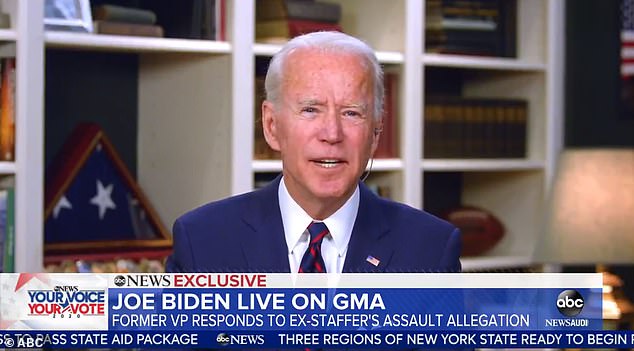 Vice President Joe Biden was present during the 2017 meeting 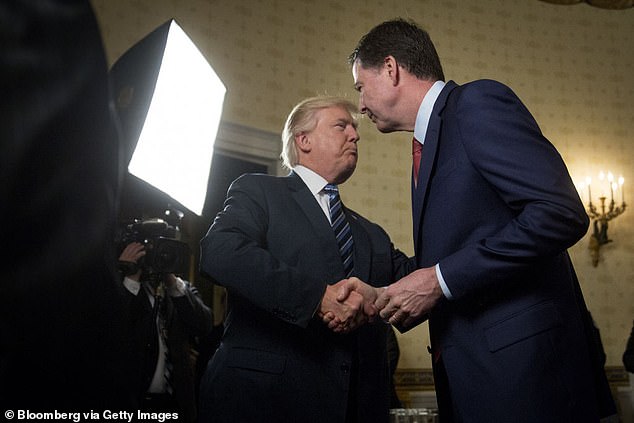 President Donald Trump, left, shakes hands with James Comey, director of the Federal Bureau of Investigation (FBI), during an Inaugural Law Enforcement Officers and First Responders Reception in the Blue Room of the White House in Washington, D.C., U.S., on Sunday, Jan. 22, 2017 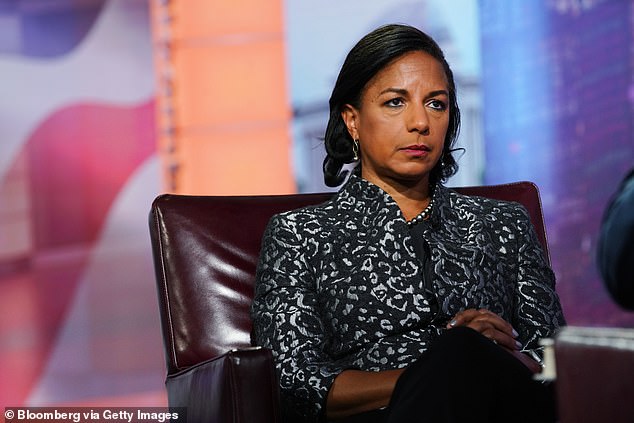 ‘From a national security perspective, Comey said he does have some concerns that incoming NSA Flynn is speaking frequently with Russian Ambassador Kislyak,’ Rice wrote in an email to herself

The memo was partially declassified in 2018. In it, Rice states that Obama wanted the matter handled ‘by the book.’

‘President Obama began the conversation by stressing his continued commitment to ensuring that every aspect of this issue is handled by the intelligence and law enforcement communities ‘by the book,’” wrote herself.

“The president stressed that he is not asking about, initiating or instructing anything from a law enforcement perspective. He reiterated that our law enforcement team needs to proceed as it normally would by the book.”

Comey ‘affirmed that he was proceeding “by the book” as it relates to law enforcement,’ according to the memo.

‘The President asked Comey to inform him if anything changes in the next few weeks that should affect how we share classified information with the incoming team. Comey said he would,’ Rice concludes.

Acting Director of National Intelligence Ric Grenell declassified the document, as well as the unmasking information.

‘What a job. I think you’ll go down as the all time great acting ever at any position,’ said Trump, after Grenell gave remarks calling for transparency.

One Trump ally concluded that the memo proves that Flynn was being targeted by Obama’ inner sanctum.

But it has been previously reported that Obama warned Trump not to hire Flynn months before the meetin, and that Trump proceeded anyway. He would fire Flynn after just weeks on the job. He said he did so because Flynn was not truthful with Vice President Mike Pence about his own Russia contacts.