The FBI has released hundreds of pages of documents on Donald Trump’s controversial former lawyer Roy Cohn detailing allegations he engaged in bribery.

As a young attorney, Cohn worked as Senator Joseph McCarthy’s grand inquisitor in the purging of America during the Communist ‘red scare’ of the 1950s.

He also served as a lawyer for the Trump family, representing them when they were sued for discriminating against black rental applicants.

He was also known for is in role prosecuting Soviet spies Julius and Ethel Rosenberg.  The couple were executed in 1953 after being convicted of conspiring to pass secrets about the atomic bomb to the Soviet Union.

Cohn had later claimed he had conversations with the trial judge without the presence of the Rosenberg lawyers, which represented an ethical breach by both Cohn and the judge, according to CNBC. 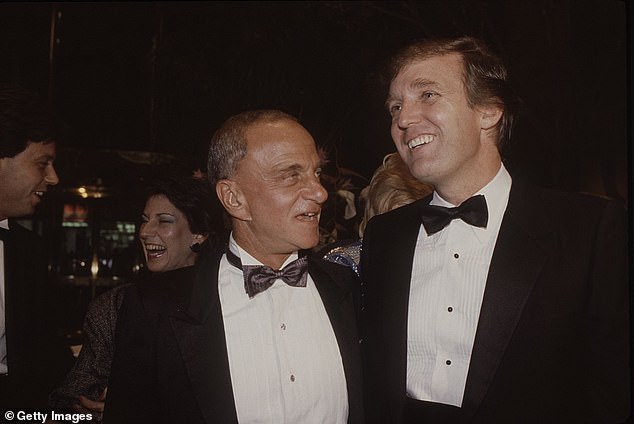 Roy Cohn served as a lawyer for the Trump family and was seen as a mentor and educator for Donald Trump. The two are pictured together at the Trump Tower opening in October 1983 in New York City

Much of the FBI documents include details of an investigation into Cohn for perjury, conspiracy and obstruction of justice.

The case was in connection to a grand jury investigation of an alleged $50,000 bribe he paid the then-chief assistant U.S. attorney in Manhattan to prevent several stock swindlers from being indicted in 1959.  Cohn was found not guilty after a trial in that case in 1964.

He was a master of public relations who sought the limelight and taught Donald Trump and Republican dirty trickster Roger Stone how to play hard ball as a ‘hired gun’ attorney.

Several of the files on Cohn were sent directly to J. Edgar Hoover, who was then the FBI’s director in the 1960s.

It is understood the FBI wanted to garner as much detail about trips by Cohn to Las Vegas in 1959, and other evidence related to his bribery case.

Other files released Friday and posted online include a letter that Cohn sent Hoover in 1969.

This was when Cohn was apparently being prosecuted on other federal criminal charges and he was later acquitted on all charges. 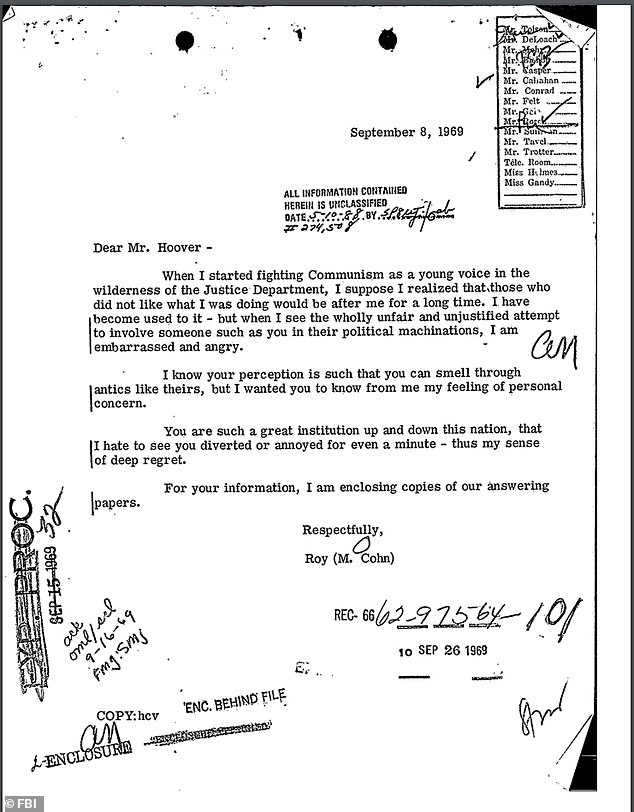 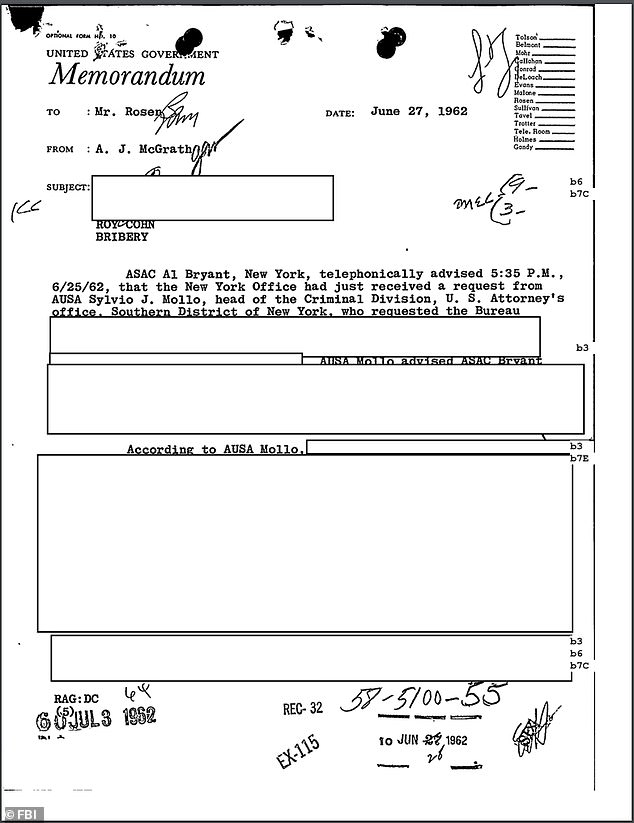 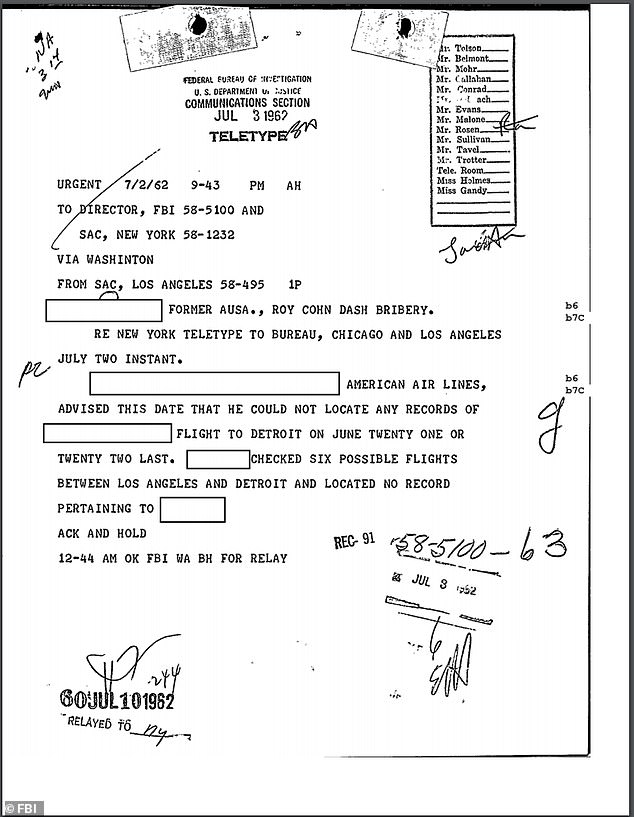 Following his high – profile acquittal, he had illustrious clients including Trump, media mogul Rupert Murdoch and the Roman Catholic Archdiocese of New York.

Cohn was born to an affluent Jewish family in the Bronx in 1927. Later in life, Cohn became known for his flamboyant reputation as a fixture at Studio 54 with a famous circle friends.

He was also a trusted confidante to Trump and his family, with Trump famously saying: ‘Where’s my Roy Cohn?,’ whenever he was faced with a financial or political challenge.

Cohn died in 1986 from complications of AIDS, less than two months after being disbarred for professional ethics violations.

He succumbed to AIDS related complications at the age of 55. According to Roger Stone in The New Yorker: ‘Cohn’s ‘absolute goal was to die completely broke and owing millions to the IRS. He succeeded in that.’

Cohn once told Penthouse: ‘People came to me because my public image was that I was unlike most other lawyers. 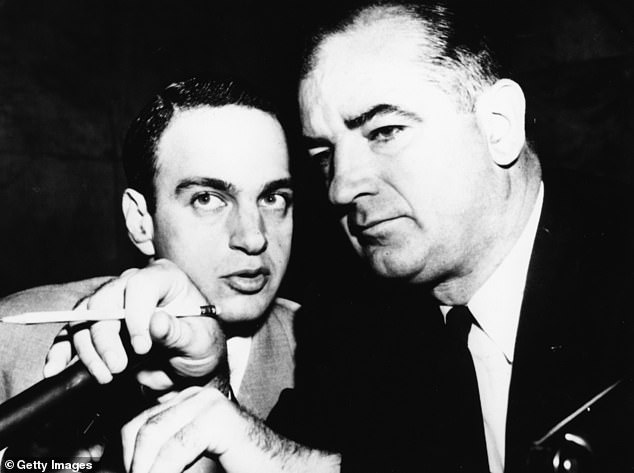 As a young attorney, Cohn worked as Senator Joseph McCarthy’s grand inquisitor in the purging of America during the Communist ‘red scare’ of the 1950s 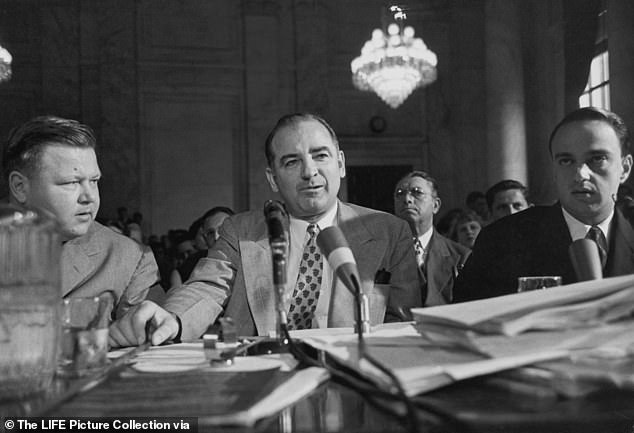 Senator  Joseph R. McCarthy sits with Roy Cohn during the Army-McCarthy hearings in 1956

‘Not the typical bill-by-the-hour, do-nothing, cover-up shyster but someone who won’t be pushed around.’

Cohn was also seen as an educator and mentor for Donald Trump after he represented his family in the 1970s.

‘Roy gave him the tools. All the tools. He loved him. He was ruthless.’

Matt Tyrnauer, an award-winning filmmaker, created a 97-minute portrait of this reviled attorney in a documentary which has been released. 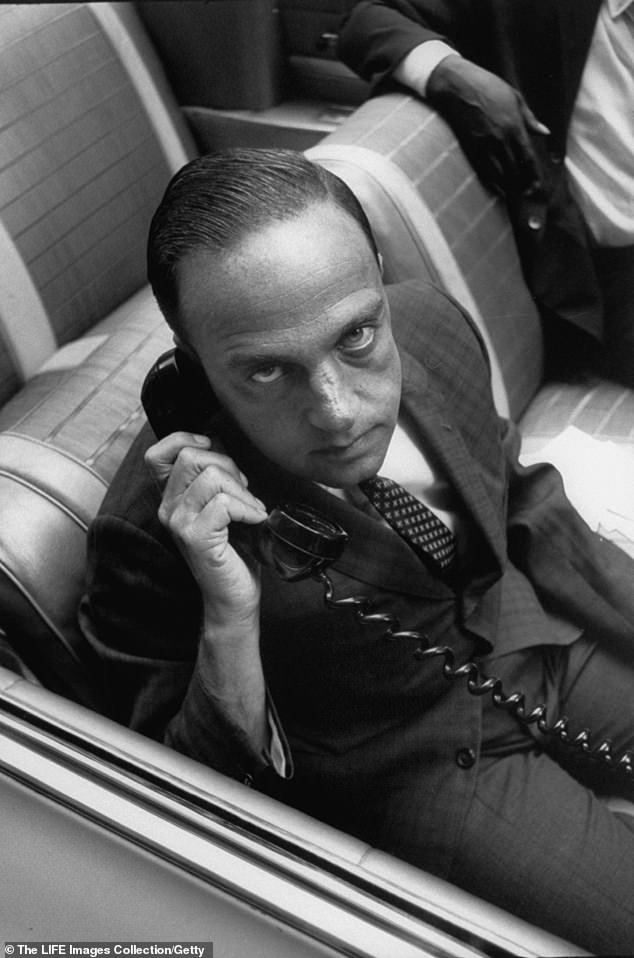 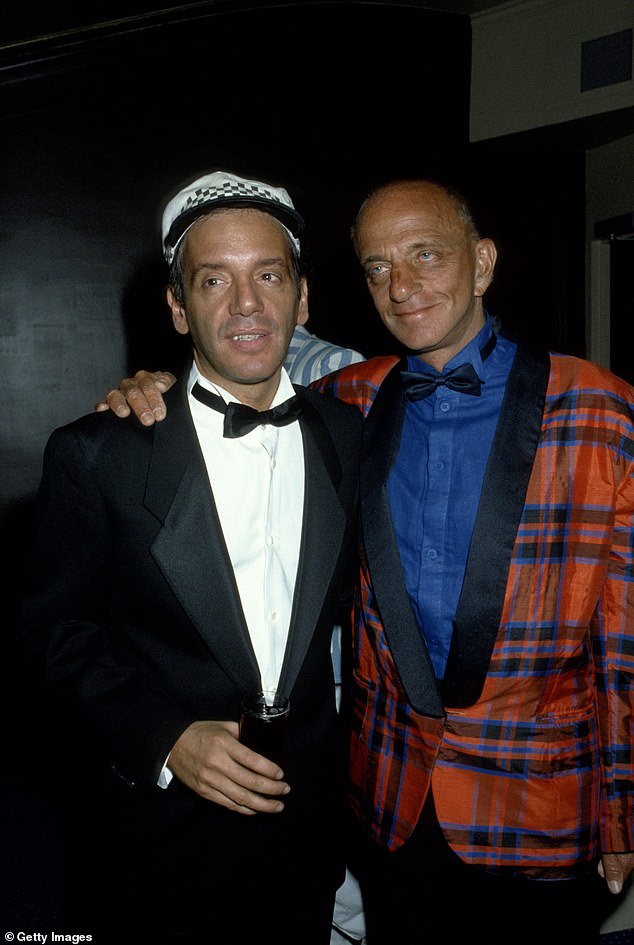 Steve Rubell and his lawyer Roy Cohn are pictured circa 1985 at Studio 54. Rubell thew Cohn an extravagant birthday party in 1972

Despite the three decades since his death, Cohn’s reputation for his aggressive and reputation-destroying tactics has become commonplace in politics.

Cohn also was an associate of the the self-proclaimed dirty trickster Roger Stone, another Trump ally.

Stone is one of a half dozen aides and advisers to President Donald Trump who were charged as part of special counsel Robert Mueller’s Russia investigation.

He is accused of lying to Congress, witness tampering and obstructing a congressional proceeding, and is set to stand trial in November in Washington’s federal court. He has pleaded not guilty to the charges.

Cohn was born to an affluent Jewish family in the Bronx in 1927, heir to the Lionel toy train corporation.

‘Don’t tell me the law. Tell me the judge’ became the hallmark of Cohn’s career that was pockmarked by endless personal controversies. His long legal rap sheet included charges of extortion, blackmail, bribery, securities fraud, conspiracy and obstruction of justice.

He was audited by the IRS 19 years in a row for tax evasion and was peripherally caught up in an insurance scam that involved the death of a young man when Cohn’s yacht mysteriously sank off the coast of Florida. 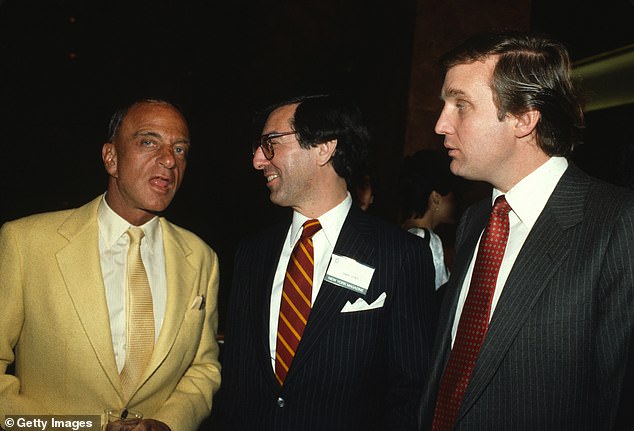 Roy Cohn stands next to Newsweek editor, Ed Kosner and Donald Trump. Cohn wielded the press like ‘his personal shiv’ said writer, Frank Rich. He learned that the press could be used to wage his battles, often slipping tips to the papers about his friends

Tyrnauer told DailyMail.com earlier this year:  ‘Once you dig into all the details, it’s an astonishing record of malfeasance.

‘That is if we’re wondering today how we could live in such a corrupt system that could support a corrupt authoritarian interloper in the executive branch of our government.

‘I think when you look at the legacy, it actually makes a certain amount of sense- but for values to say we live in the United States of Amnesia.’

One of Cohn’s most famous friends was the future president Trump. ‘Donald calls me 15 to 20 times a day. He’s always asking, ‘What is the status of this…and that?’ said Roy Cohn in a 1980 interview with Vanity Fair.

They met seven years earlier in 1973 when the budding real-estate developer and his father, Fred were in hot water with the Justice Department for housing discrimination against African-Americans.

Trump approached Cohn for advice during a chance encounter at a private midtown dinner club known as ‘Le Club.’ Cohn had reportedly told him: ‘Tell them to go to hell and fight the thing in court and let them prove you discriminated.’

‘Trump was pure outer-borough material. He had the money, but he didn’t have the status.

He was considered to be very uncouth and was not welcome in the important places in New York City business and society, but he had a burning aspiration to rise to those levels,’ explained Tyrnauer to DemocracyNow.

‘From that point on Cohn saw Trump as his protégé and really did everything he could to establish him as a social business force in the New York City during that period,’ he said to Dailymail.com