Donald Trump Jr. was told by Spanish prosecutors he should be ‘concerned’ on Friday after they handed over recorded phone calls between a Russian oligarch he met with in 2016 to the FBI

Donald Trump Jr. has been told he should be ‘concerned’ that the FBI has obtained wiretapped conversations involving Alexander Torshin, a Kremlin-linked banker who tried to set up a ‘backdoor’ meeting between the president and Putin during the 2016 NRA convention.

The calls were between Torshin, who met Don Jr. in 2016, and Alexander Romanov, a Russian money launderer who has long been the target of an investigation by Spanish prosecutors.

It is not known when they were recorded or even what the pair discussed but they were originally obtained by Spanish police as part of their ongoing pursuit of Romanov for money laundering and organized crime.

The FBI requested them ‘several’ months ago and Spanish prosecutors complied, giving a strong indicator that Torshin is part of the special investigation into Russian interference in the 2016 presidential election as has long been suspected.

On Friday, Spanish prosecutor Jose Grinda confirmed that he had received a request from bureau agents to turn the tapes over and that Trump Jr., who ended up meeting Torshin briefly in 2016 despite the Trump campaign rejecting his earlier requests for private meetings, should be ‘concerned’.

In the calls,  Romanov called Torshin the ‘Godfather’ but what else they discussed or when the conversations took place remains unclear.

In May 2016, Torshin tried to set up a meeting between Putin and Donald Trump and billed it to Trump campaign aides as a ‘backdoor overture and dinner invitation’ at the NRA convention which was taking place in Louisville, Kentucky, weeks later. 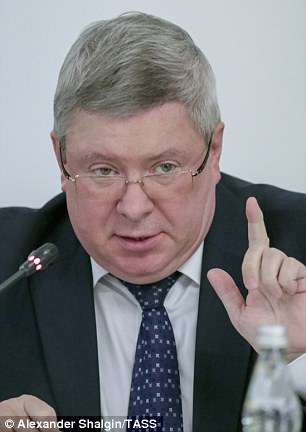 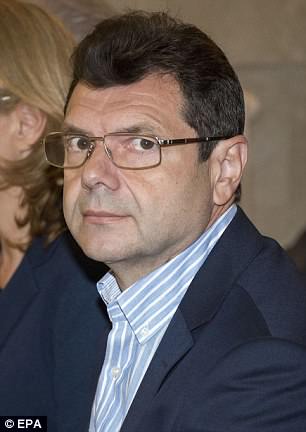 The calls were between Alexander Torshin, a former Kremlin legislator and now an official at a Russian central bank (left) and Alexander Romanov, a known money launderer (right) 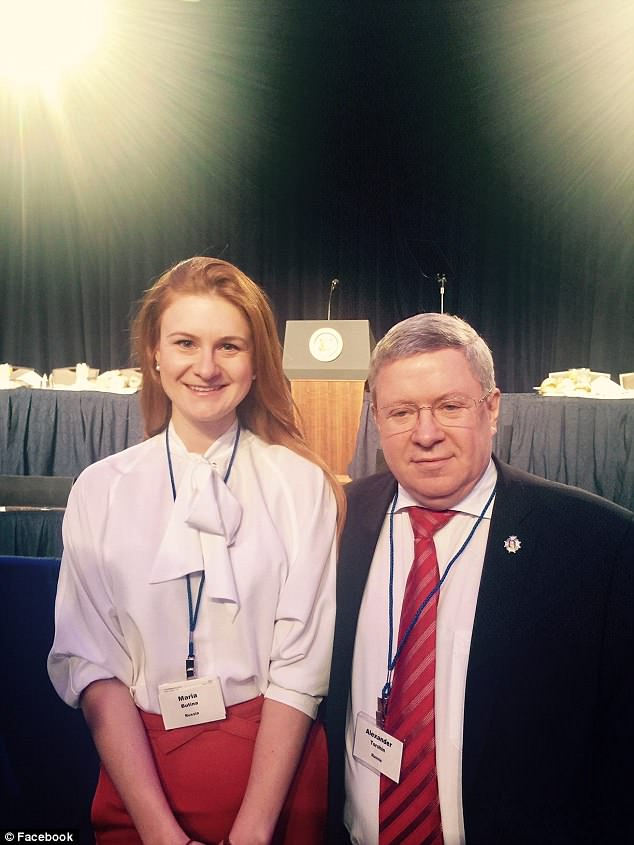 Jared Kushner rejected it, according to a New York Times report in November, telling his campaign colleagues to ‘be careful’.

He ended up meeting Donald Trump Jr. briefly at a separate event the same week where the pair spoke for ‘two or three minutes’, mostly about their shared passion for guns, according to people who were there.

There is no proof that he sat down with anyone else from the Trump campaign aside from this one encounter and his proven connection to them stops there. 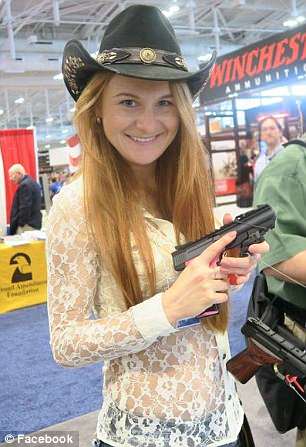 Butina is pictured at the 2015 NRA convention. Senate Democrats say they have proof Russians were funneling money through the NRA to support Trump’s campaign

However, the FBI’s interest in the calls may be sign of suspicion over what money, if any, Torshin or any other Russian gave the NRA in the run-up to Trump’s campaign. It has been claimed by Senate Democrats that he funneled money into the NRA and in turn bolstered Trump’s campaign.

The NRA has insisted that Torshin only ever paid his membership fees but admitted previously to taking roughly $2,500 in contributions from Russian-linked contributors.

Torshin is on a list of oligarchs who have been sanctioned by the Treasury Department.

In banning him, they said it was proven that he had been trying to influence the American political system for years, since long before Trump announced his campaign, and that he was trying to act on Putin’s behalf to push his agenda.

Spanish police have long been trying to snare him and came close to it in 2013 when they planned to arrest him at a party thrown by Romanov on the island of Mallorca. He never showed up and has evaded them ever since.