An upcoming report from the Justice Department’s internal watchdog is expected to criticize senior FBI leaders for not moving quickly enough to review a trove of Hillary Clinton emails discovered late in the 2016 campaign, according to people familiar with findings.

The FBI’s timing has been a sore point for Clinton supporters, who say then-director James Comey’s announcement of the review less than two weeks before the Nov. 8, 2016, election contributed to her loss.

The agency’s findings affirming their decision not to pursue criminal charges against Clinton were disclosed two days before the vote – too late, her supporters say, to undo the damage.

Some FBI officials knew in September 2016 of the emails on former Rep. Anthony Weiner’s laptop but the bureau did not obtain a warrant to review them until the following month.

Clinton supporters say the candidate’s name could have been cleared much faster if the FBI acted on the emails as soon as they knew about them.

Key moment in campaign: Hillary Clinton has claimed repeatedly that the timing of James Comey’s revelation that a new trove of her emails were found on Weiner laptop was what cost her the election Weiner in the middle again: The trove of Hillary emails was found on his laptop after DailyMail.com revealed he was sexting an underage girl. Now the DoJ inspector general is to criticize how the FBI dealt with the discovery Set to be criticized: James Comey, who was later fired by Trump as FBI director, is in the firing line for not moving fast enough to get a warrant to have the Clinton emails read

An inspector general report examining a broad range of FBI actions during the Clinton email investigation will criticize officials, including Comey, for not moving fast enough to examine the email trove and for a weeks-long delay in getting a warrant, according to people familiar with the matter who were not authorized to discuss it publicly and spoke on condition of anonymity to The Associated Press.

A lawyer for Comey and spokespeople for the inspector general and the FBI all declined to comment Monday.

The report will likely revive scrutiny of the FBI’s handling of the Clinton case and the extent to which it helped shape the outcome of the presidential election.

Its conclusions may cut against President Donald Trump’s repeated assertions that the FBI was working against him during the campaign and instead revive allegations that the bureau broke from protocol in ways that ultimately harmed Clinton.

The nonpolitical watchdog has been repeatedly pulled into the partisan arena, amid demands to investigate Justice Department actions in the early stages of the FBI’s probe of possible coordination between Russia and the Trump campaign.

On Sunday, the Justice Department asked the inspector general, Michael Horowitz, to expand his existing investigation to look into whether Trump associates were improperly monitored during the campaign for political reasons.

The report dealing with the Clinton emails arises from a wide-ranging investigation launched in January 2017.

It has been examining actions including Comey’s decision to announce his recommendation against criminal charges at an FBI headquarters news conference and his decision months later to alert Congress that the probe had been reopened because of the discovery of email messages on Weiner’s laptop.

The report is also expected to criticize two FBI officials who exchanged derogatory text messages about Trump while they worked on the Clinton investigation.

A draft of the report has been completed, and officials whose actions are scrutinized in it have been permitted with their lawyers to review it and respond to the findings. The final version is expected out next month. 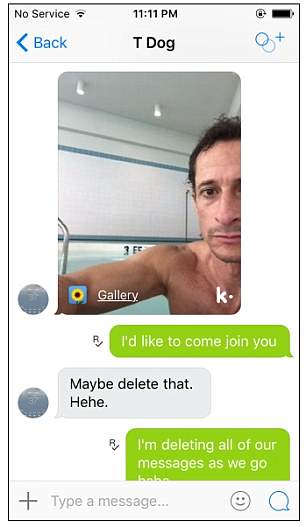 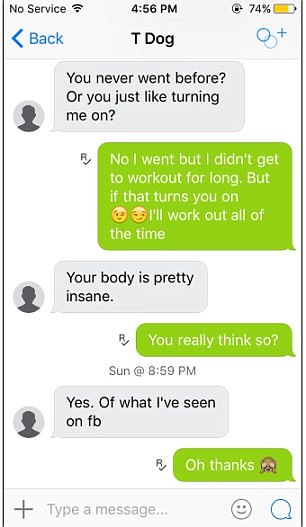 Sick: Anthony Weiner’s depraved sexts to an underage girl were revealed by DailyMail.com, settting off the probe which uncovered that Hillary Clinton emails were on his laptop

A separate inspector general report from last month faulted former Deputy Director Andrew McCabe for misleading investigators about his role in a 2016 news media disclosure about an investigation into the Clinton Foundation.

McCabe, who has denied wrongdoing, was fired because of those findings, and the inspector general has referred the matter to the U.S. Attorney’s office in Washington for possible criminal prosecution.

Weiner is the former husband of top Clinton aide Huma Abedin. His laptop was being analyzed by FBI investigators as part of a separate sexting investigation involving a teenage girl.

Weiner, a former Democratic congressman from New York, is serving a 21-month prison sentence after pleading guilty to sending obscene material to a 15-year-old girl.

In his book released last month, ‘A Higher Loyalty,’ Comey writes that he learned in early October – probably from McCabe – that Weiner’s laptop might hold a connection to the Clinton email investigation.

He said he did not recall the conversation clearly and that it seemed like a ‘passing comment and the notion that Anthony Weiner’s computer might connect to … Hillary Clinton made no sense to me.’

Comey said it wasn’t until the morning of Oct. 27 when FBI officials asked his permission to seek a warrant for the Clinton emails, having determined that ‘hundreds of thousands of emails’ from Clinton’s personal email domain existed on the computer and that there was no way Weiner would consent to a search of his entire laptop given the legal trouble he was in.

Some of the emails on the laptop had been forwarded by Abedin to Weiner to be printed out while others had been stored there after being backed up from personal electronic devices.

The FBI subsequently obtained a warrant, and though Comey said he was told there was no chance the email review would be done before the election, he announced on Nov. 6 that, ‘Based on our review, we have not changed our conclusions that we expressed in July with respect to Secretary Clinton.’