Sesame is fast becoming a risky ingredient as allergy rates soar – driving the FDA to explore warning labels for foods that contain the nutty white seeds.

For decades, the agency’s list of common food allergens has consisted of eight products which cause 90 percent of reactions: milk, eggs, peanuts, wheat, fish, shellfish, tree nuts, and soybeans.

That list is set to grow to incorporate sesame, since new data suggest that now more than 0.1 percent of Americans have sesame allergies – the same prevalence as fish and soy allergies.

On Monday, FDA Commissioner Dr Scott Gottlieb said the agency is now conducting its own investigation to determine the prevalence of sesame allergies and how to alert consumers.

The move comes as the UK faces a similar battle after a 15-year-old girl was killed by an allergic reaction to undeclared sesame in a sandwich from Pret A Manger at Heathrow airport.

More than 300,000 Americans are allergic to sesame, data suggest. It is now on par with fish and soy allergies, a huge increase in 20 years. Now, the FDA is taking action

‘Unfortunately, we’re beginning to see evidence that sesame allergies may be a growing concern in the US,’ Dr Gottlieb said.

‘Because sesame is not recognized as a major allergen, right now it’s not required to be declared as an allergen on food labels. In fact, it may not always be specifically listed in the ingredient statement.’

Currently, sesame may not even be listed as an ingredient. It could come under ‘spices’ or ‘flavors’.

And yet, it is ubiquitous in many types of food, from sauces to bagels to sushi. 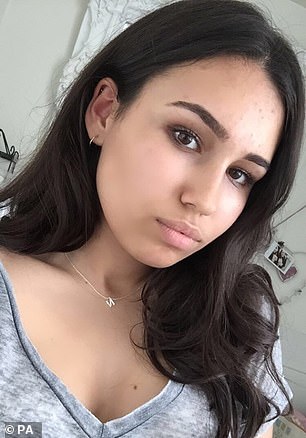 Natasha Ednan-Laperouse collapsed on board a flight to Nice in 2016 after eating a sandwich she bought at Heathrow Airport containing sesame, which she was allergic to

It’s believed that around 300,000 Americans currently have a sesame allergy.

But the reasons why it provokes such a strong reaction – in more and more people – are still being etched out.

Sesame seeds contain a protein called oleosin which is known to have the potential to trigger anaphylaxis. But scientists, sure that is not the only concerning facet, are still trying to map out the seeds’ full makeup.

As for the rise, doctors believe the biggest reason is that sesame has become more common in our diets.

In Israel, sesame is the third biggest allergen, according to the national food and drug regulation agency.

In American, Middle Eastern fare, including hummus and halva and sesame-sprinkled bread, has soaring in popularity, and bagels have branched out of the New York bubble.