Officials in both the United States and Canada are warning that raw oysters are at the center of a norovirus outbreak that has erupted across America.

The Food and Drug Administration (FDA) is working with the Centers for Disease Control and Prevention (CDC), Public Health Agency Canada and the Canadian Food Inspection Agency to track and control the spread of the virus.

While norovirus is not often deadly, infection can cause a person to suffer from severe diarrhea, vomiting and other symptoms for around three days.

Officials from the FDA, CDC, and Canadian health agencies are warning that a norovirus outbreak in 13 states is tied to oysters harvested in British Columbia (file photo)

‘The FDA and the states conducted a trace forward investigation to determine where the raw oysters were distributed and to ensure they’re removed from the food supply,’ the agency wrote in a release.

‘Oysters can cause illness if eaten raw, particularly in people with compromised immune systems. Food contaminated with norovirus may look, smell, and taste normal.’

Contaminated oysters were harvested as early as January 31, and restaurants are advised not to serve any that were gathered after that date.

The CDC says that a recall will not be issued on the oysters for the time being.

Consumers are advised not to eat oysters if they are in a location where the contaminated shellfish were distributed.

If they have oysters at home that they believe could be potentially contaminated, they are advised not to eat them, even when cooked.

Oysters are usually steamed for cooking, and temperatures may not reach high enough to kill the virus, the FDA explains.

A person who is infected with norovirus may not develop symptoms for 24 to 48 hours, the CDC says. 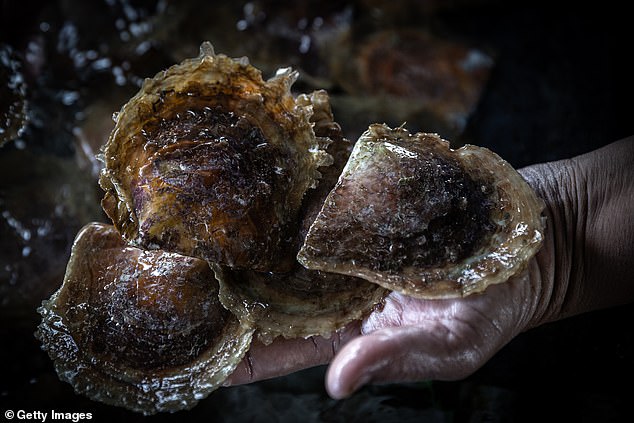 When someone does get ill, they will often feel symptoms for around one to three days before it resolves – usually without the need for medical intervention.

The period of sickness can be brutal for the infected, especially for young children and the elderly who catch the virus.

While death from norovirus is incredibly uncommon, it can occur is some fringe cases where a person gets so dehydrated that they suffer organ issues.

Norovirus is responsible for around 900 deaths every year, and causes 109,000 hospitalizations, the CDC reports.

The virus is also extremely contagious and can easily jump from one infected person to another.

Outbreaks of the virus are fairly common, and often associated with cruise ships because of the unsanitary and crowded conditions on board.

The popular fast-food chain Chipotle was also found to be at the center of multiple outbreaks between 2015 and 2018, and agreed to pay a $25 million settlement in 2020 as a result.