FDNY fire marshal is arrested for ‘savagely beating his wife’

A FDNY fire marshal has been arrested for beating his wife and threatening to kick her out of their home if she didn’t perform sex acts – authorities have revealed.

Joseph Sullivan, 42, was charged with two counts of coercion and one count each of assault, obstruction of breathing and criminal mischief on Sunday.

Court papers said Sullivan choked his wife, derided her as a whore and savagely beat her in the incident on Sunday night at their house in Long Island.

According to the New York Daily News, Sullivan had been due to be promoted on Saturday to fire marshal commander – but the move was halted after the revelations emerged.

The-42-year-old veteran cop, who has served in the FDNY for 18 years, allegedly busted his wife’s iPhone, ripped off her light blue robe and wrapped it around her neck as he tried to choke her.

Then he loosened his grip and punched her on both sides of the face, cutting her lip.

He then reportedly turned the situation sexual by trapping her inside the bedroom and cuddling her as she lay in agony on the bed.

The papers claimed Sullivan forced her into degrading sex acts of which she wanted no part.

But she eventually managed to escape and ran into a neighbor’s house for help.

‘Over the period of my marriage to Joseph Sullivan, I have been mentally and physically abused by him,’ the wife said in her statement. 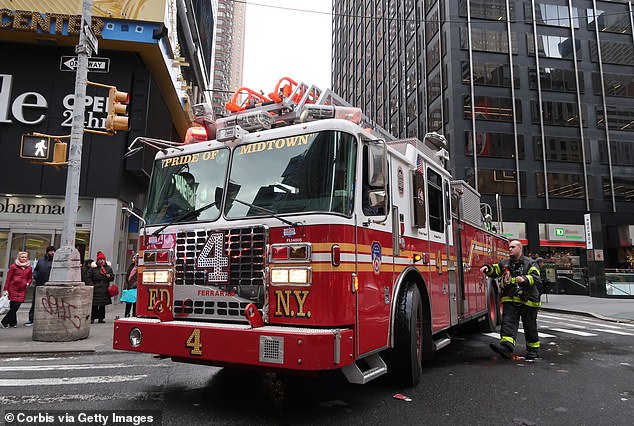 ‘He has forced me by intimidation to perform sexual acts to him that I did not want to perform … Joseph would tell me it’s my wifely duty and if I did not perform such sexual acts that he would kick me out of the house and I would never see my two children again.’

‘Joseph would also promise me that each sexual act would be the last time I would have to do so,’ she added. ‘However, the promise is never kept.’

Sullivan has now been released after posting $10,000 bail, and has been suspended by the FDNY.