The flagship of the French Navy is at the centre of a coronavirus emergency – following a training exercise with NATO allies including a British frigate.

The nuclear-powered Charles de Gaulle aircraft carrier, one of the largest warships in the world, is thought to have at least 40 cases of the virus among its force of around 2,000.

It was steaming back to its home port of Toulon, in the south of France, on Wednesday morning as a screening team prepared to board.

A French Armed Forces Ministry spokesman confirmed the Charles de Gaulle was on its way back to Toulon. It has been deployed in the Atlantic as part of the Foch mission and is pictures above off the coast of Frederikshavn in Denmark

‘They are showing symptoms consistent with possible Covid-19 infection. These first symptoms have appeared recently.’

At the end of March the Charles de Gaulle was the flagship for NATO Maritime Group One and took part in a training exercise off the east coast of Denmark.

The force included the Royal Navy Type 23 frigate HMS Sutherland, which has a complement of 185. 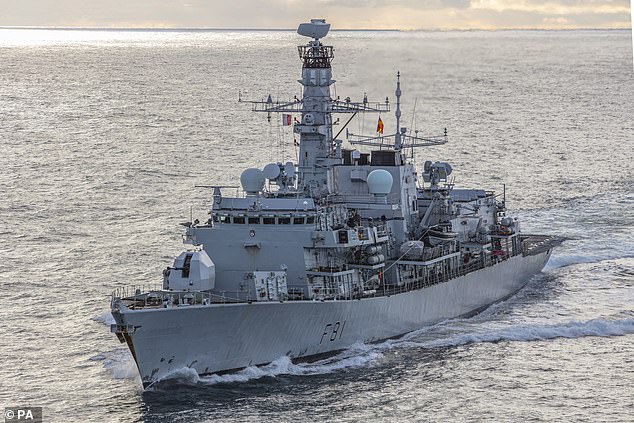 HMS Sutherland was involved in the training exercise. It was the first vessel assigned to escort Queen Elizabeth when she embarked on sea trials in June 2017

A case of coronavirus has also been reported on the Belgian frigate Léopold 1, which was escorting the Charles de Gaulle.

The Charles de Gaulle is currently in the Atlantic and returning to Toulon as quickly as possible.

It is equipped with a medical platform on board complete with a resuscitation unit, and everything is being done to keep those who are thought to be infected away from their comrades.

Sailors displaying symptoms of coronavirus are all being placed in solitary confinement. 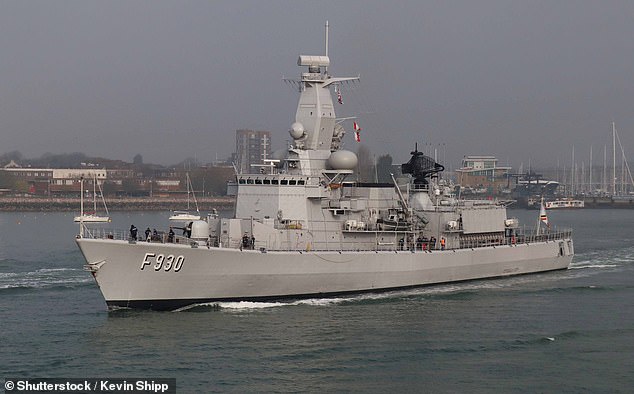 Beyond sailors and commandoes, the Charles de Gaulle has an air wing of 600 pilots and support crew.

It carries aircraft including Rafale M fighters and AS532 Cougar helicopters and was launched in 1994. 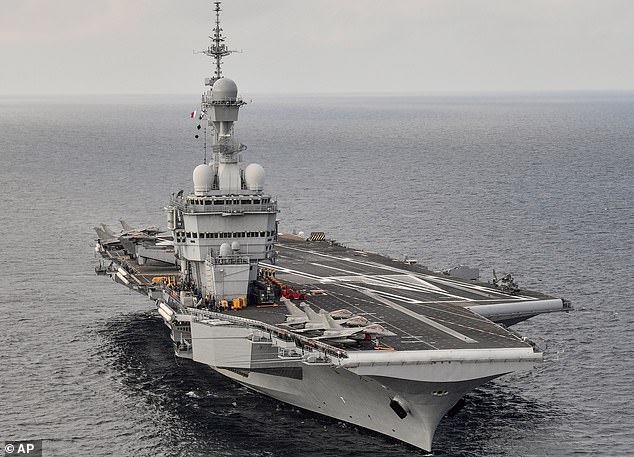 The French Navy flagship carrier is equipped with a medical unit on board complete with a resuscitation unit. All 40 sailors with suspected Covid-19 are being kept in solitary confinement

It was the only nuclear-powered aircraft carrier built outside of the United States Navy.

The coronavirus pandemic is worsening in France, as the country’s death toll soared past 10,000 last night following hundreds more deaths announced in hospitals and care homes.

Known fatal cases climbed from 8,911 to 10,328, making France the fourth country after Italy, Spain and the US to have a five-figure death toll.