Australian housing prices could be set to increase as a wave of Chinese investors take advantage of a slump in the market from the coronavirus pandemic.

Housing prices in Australia have fallen in the wake of COVID-19, with high unemployment and closed borders and businesses leaving local buyers strapped to move into the market and buy an affordable home.

Interest from Chinese investors has remained steady throughout the uncertain period, with property experts fearing Australian buyers could become out-priced from the real estate sector in the face of keen international investors.

Australia’s handling of the coronavirus crisis has been appealing to Chinese buyers with many swarming to snare a bargain during a slump in the market. Pictured: Newly-sold property in Cronulla

Georg Chmiel, the chairman of China’s biggest overseas property sales company Juwai IQI, told A Current Affair investors were excited to enter the Australian market on the back of the coronavirus pandemic.

‘China is back in business much earlier than the rest of the world,’ he said.

‘Australia was already appealing as a safe country where your investments are protected.

‘Now, the country seems to have managed the pandemic well. That makes it even more appealing to foreign buyers.’

Juwai IQI data found a 40 per cent drop in interest from Australian buyers in properties in the first quarter of 2020, while Chinese searches dropped just 14 per cent.

‘We’ve seen about 90 per cent of enquiries at the moment coming from Chinese buyers,’ she said.

‘It’s interesting to note these are not new people, these are not random people I have never dealt with, these are people who bought and sold from me two (to) four years ago and have just come back into the market.

‘There certainly is a perception of value at the moment.’

Economists surveyed by Finder forecast Sydney house prices would fall 10.2 per cent by next year, Melbourne by 9.2 per cent and as all other capital cities suffered declines of at least eight per cent.

But such big drops would not happen if a large number of foreign buyers swooped in to capitalise on a temporarily depressed market – a situation that didn’t happen during Australia’s early 1990s recession.

‘A lot of the mainland Chinese are seeing this as an opportunity to exploit a great deal. That’s what they’re going to see in the property market in the next six months,’ he said.

‘What we’ll see is the wealthy mainland Chinese will look towards Australia now to secure their wealth, and secure their health.’

Mr Chmiel said Australia’s avoidance of large numbers of COVID-19 deaths had created an image of it being a healthy place to live, which is also appealing to foreign buyers looking to move and not just invest.

‘That makes it even more appealing to foreign buyers,’ he said. ‘Marketers in China are already using Australia’s good performance to persuade parents of children who have been studying in the US and the UK to look at Australia instead.’

Melbourne is regarded as the most popular city in Australia for Asian buyers, followed by Sydney and Brisbane, with Australia considered a stable place to invest money.

‘In general, Chinese buyers like the ease that comes with newly constructed units or houses,’ he said.

‘They prefer homes near good schools and universities and convenient to services, transit and shopping.

‘At least three-quarters of Chinese buyers are looking for property valued less than $1million, and the median inquiry price comes in quite low, at around $610,000.’

Michael Pallier from Sotheby’s International Realty in Sydney’s eastern suburbs said he had also experiences an uptake in interest from Asian buyers.

‘They can’t get enough of it. Clean air, clean food, great education, safe environment – it’s paradise for them,’ he said.

‘There is always demand and the Chinese people will always like Australia,’ Mr Pallier’s wife, Lulu, said.

The Australian dollar, which has also taken a hit during the pandemic, is also enticing to international buyers, who can factor that into their budgets.

The survey of 25 economists by financial comparison website Finder predicted sharp drops in every state and territory, with a majority of the experts declaring now was not the time to buy property and those seeking a home should wait for the market to reach its bottom next year. 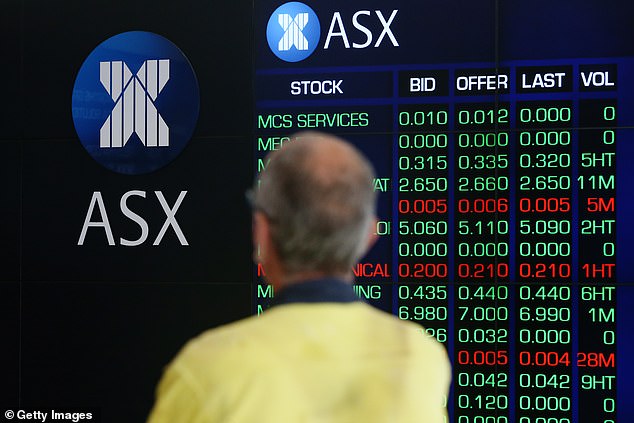 Georg Chmiel, who chairs Juwai IQI, said Australia was regarded as a safe place to invest. Pictured is a man looking at screens at the Australia Securities Exchange in Sydney

National Australia Bank expected apartment prices to fall at a faster pace than houses by 2021 as landlords struggled to find tenants, with border closures stopping international students from coming to Australia.

NAB forecast a 12.8 per cent plunge in Sydney’s median unit price and a 14 per cent plummet in Melbourne by next year.

In Sydney’s city centre, 13.8 per cent of units are empty, with 13 per cent vacant in central Melbourne.

SQM Research chief executive Louis Christopher said the loss of hospitality jobs, from the COVID-19 shutdowns, and international students was devastating for landlords.

‘The blow out in rental vacancy rates for the major CBDs suggests a mass exodus of tenants occurred over the course of March and April,’ he said.

‘This might be attributed to the significant loss in employment in our CBDs plus the drop off in international students.

‘We are well aware of a surge in short term accommodation now being advertised for long term leasing.’ 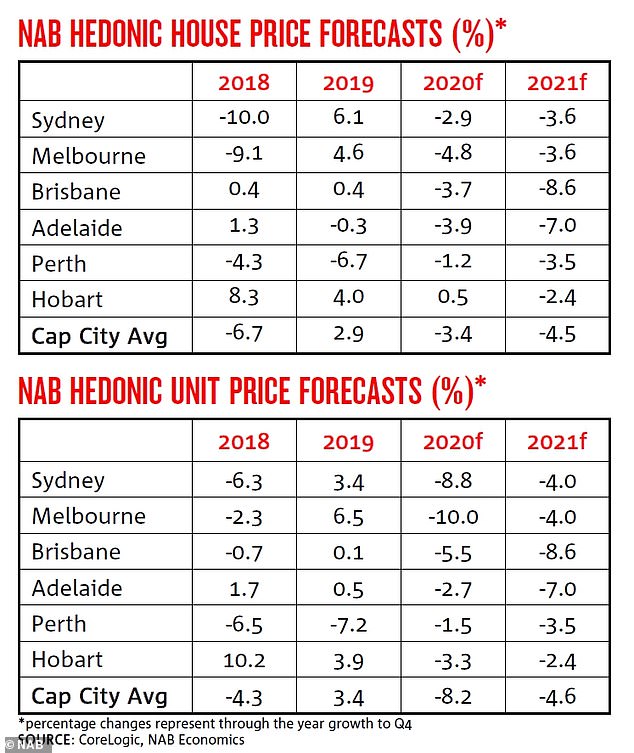 NAB predicted capital city property prices would fall by 10 to 15 per cent during the next 12 to 18 months, as unemployment hit levels unseen since the 1930s Great Depression